Some 50 islands in the North Sea and Baltic Sea belong to Germany, nearly all of them slow-paced and pristine nature sanctuaries. The two bodies of water are quite different in character. While the North Sea is exposed to brisk breezes and crashing waves, the Baltic is like a giant protected sound with calmer waters and a more chilled vibe. We introduce four of our favorite offshore gems.

Because of its reputation as a Dionysian summer colony for celebs and jet-setters, Sylt has often been compared to Martha’s Vineyard and Saint Tropez. Yes, there are flashy bars like the glorified beach shack called Sansibar, fancy Michelin-starred restaurants like Söl’ring Hof, and plenty of cruising late-model BMWs and Ferraris. Yet Sylt is so much more. Long, narrow, and connected to the mainland by a train-only causeway, it has all the prerequisites for a quintessential summer holiday.

More than 40km of sugary, dune-fringed beaches make it easy to find a spot to spread your blanket in soul-restoring solitude. The blustery west coast draws A-list windsurfers to its annual world cup competition, while on the sheltered eastern side the rhythm of the sea exposes the muddy ocean floor during low tide. Taking a barefoot ‘walk on the water’ is a highlight of any Sylt stays.

Other typical destinations to steer towards include lighthouses striped like candy canes, centuries-old Frisian cottages huddled under thickly thatched roofs and a mysterious 5000-year-old Stone Age burial chamber. It’s easy to fall under the spell of Germany’s northernmost island. No surprise it’s nicknamed the ‘Queen of the North Sea’. 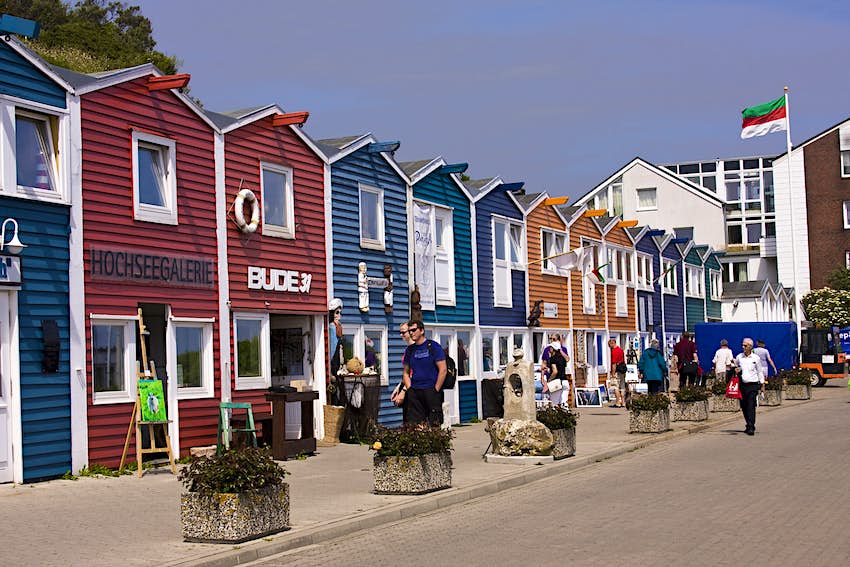 Helgoland – the island that rocks

San Francisco may have Alcatraz, but Germany has its own ‘rock’, although it was never a high-security prison. Some 70km from the mainland, Helgoland is a tiny, wind-battered speck of red sandstone sticking out of the North Sea like a flooded Uluru. The boat trip out here is not for the faint-of-stomach but all is forgotten when arriving at this almost mystical island – actually two islands torn apart by a killer storm in 1720.

Helgoland’s history is as colorful as the phalanx of traditional fishermen’s houses lining its diminutive harbor. Danish until 1807, it was ceded to Great Britain after the Napoleonic wars only to be traded to Germany in 1890 in exchange for the African island of Zanzibar. It was an ill-considered move, in hindsight, given that the Germans made good use of Helgoland’s strategic location in both world wars.

Today, it attracts mostly day-trippers from Hamburg, Bremerhaven, and Cuxhaven, hungry for duty-free deals and the island’s famous local lobster. But only those who spend a little more time will get to truly soak up its mind-clearing air (cars are banished) and mild maritime climate courtesy of the Gulf Stream. One much-photographed landmark is the Lange Anna (Tall Anna), a 47m high pinnacle jutting from the sea. There are also WWII bunkers and ruins to explore, and resurging numbers of Atlantic grey seals. 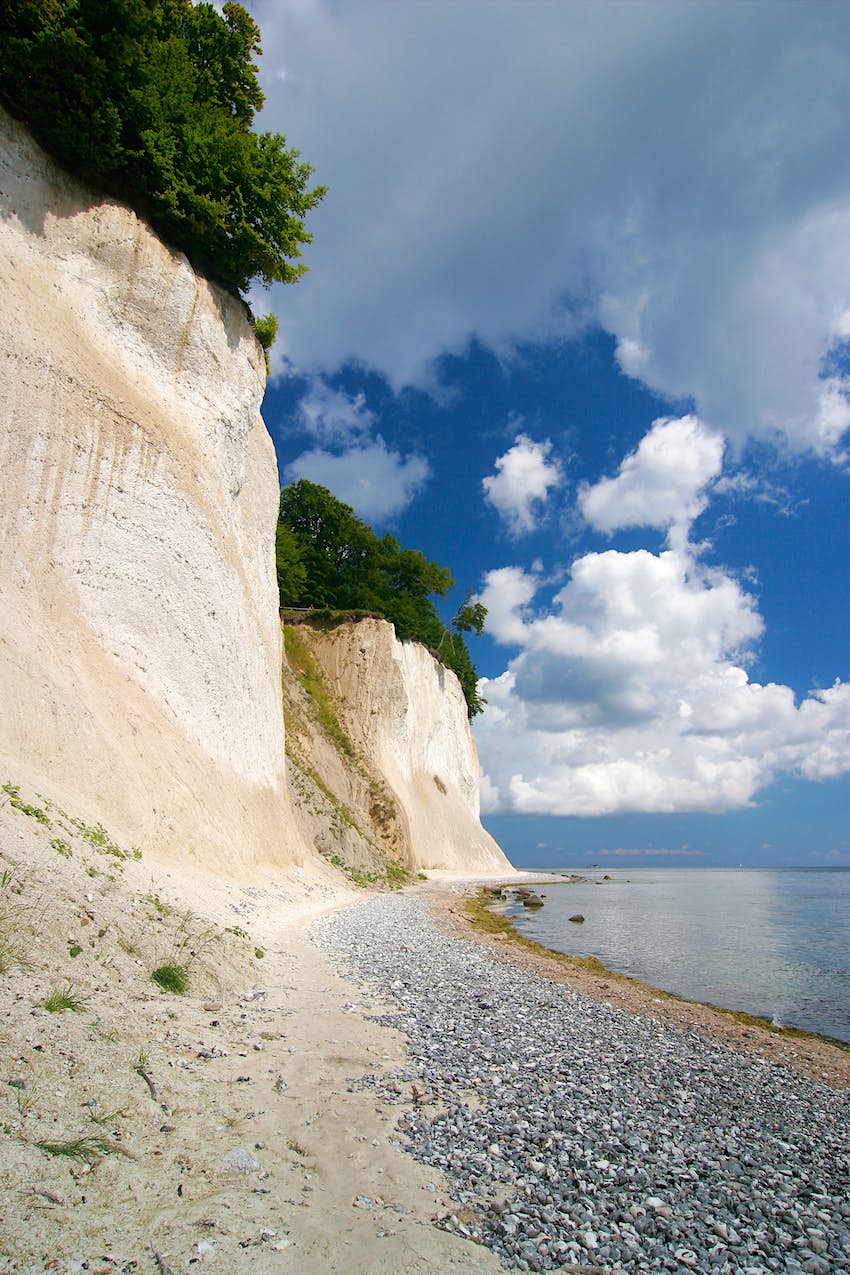 Germany’s largest island, Rügen packs in as much nature, history, and architecture as many a small country. Fringed by 60km of sandy beaches, this Baltic isle is increasingly becoming a hip getaway for nature-starved Berliners (the capital is only 300km away). But it actually looks back on a long and storied tradition as a holiday destination. Bismarck, Albert Einstein, and Christopher Isherwood were among the rich, smart and famous who vacationed here before WWII.

An even earlier visitor was Romantic painter Caspar David Friedrich who so sensitively captured Rügen’s enigmatic beauty in his moody landscapes. Among his favorite motifs were the famous white-chalk cliffs that plunge into the jade-hued sea in the far north. Just as gleaming white is the ornate gingerbread trim on the seaside villas that have lined the beach promenade in Binz, Rügen’s main resort, since its late 19th-century heyday.

Flash forward to the 1930s when the Nazis built Prora – an achingly ugly yet fascinating tourist complex intended as frolicking grounds for 20,000 party faithful – but never completed. After languishing for decades, the behemoth is now being developed into a luxury getaway, a move that some view critically and others as a sign that Germany is emerging from its darkest chapter. 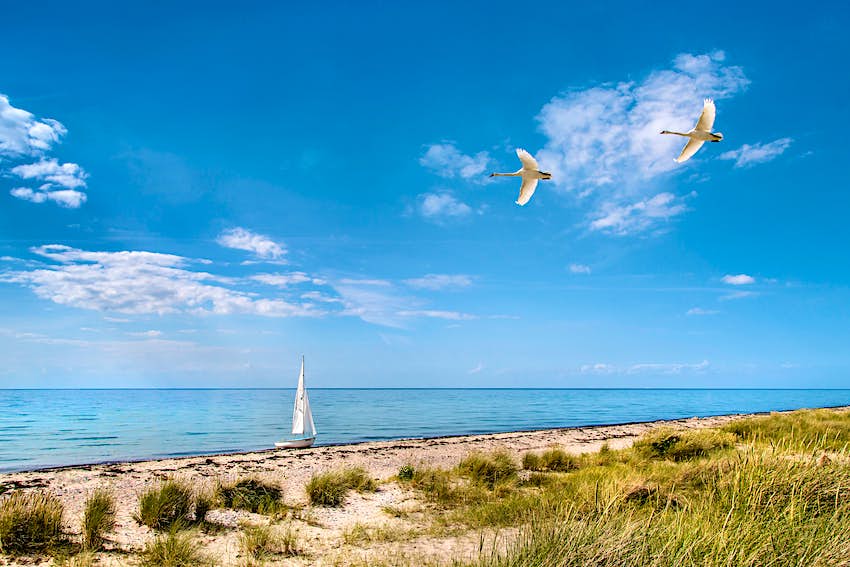 Here’s a trivia question: where did Jimi Hendrix play his final concert? Answer: at the Love & Peace Festival, held on Germany’s island Fehmarn (fehmarn.de/en) in September 1970. Rarely on the radar of non-Germans, this Baltic beauty has long scored high with native holidaymakers in search of unspoiled nature and an unhurried vibe.

Connected to the mainland by a 963m-long bridge, Fehmarn is one of the sunniest spots in the entire country. Its 78km of broad beaches that slope gently into the sea get a big thumbs-up from families, while photographers are richly rewarded in springtime when canary-yellow rape blossoms blanket the hills.

Bird watchers arrive year-round to train their binoculars on feathered commuters such as great herons, tufted ducks, and red-necked grebes. Perfect wind and water conditions have also made Fehmarn a mecca for kitesurfers and host several competitions, including the prestigious Kite-Surf World Cup (kitesurfworldcup.de).

7 Naturalscapes To Escape In Germany