Niagara Falls in Canada is a collective name given to three waterfalls, namely Horseshoe Falls, American Falls, and Bridal Veil Falls, on the River Niagara along the border of US state of New York and the Canadian province of Ontario. Known to be one of the most famous tourist spots in the US-Canada border region, the place plays host an average of about 30 million tourists each year. The falls have the largest flow rate in North America and are truly a wonder like no other.

Niagara Falls is a collective name given to three separate waterfalls situated on the River Niagara on the border between US state of New York and Canada’s Province of Ontario. The main waterfall, the Horseshoe Falls, lies on the US-Canada border while the American Falls and Bridal Veil are the territories of the USA.

With an average flow rate of 168000 Cubic meters per minute, Niagara Falls is one of the biggest sources of hydroelectricity in the world. It is located just 27 km northwest of Buffalo, New York and 121 km South East of Toronto.

The largest waterfalls of the Niagara Falls is the Horseshoe Falls, which has an average flow rate of 225000 Cubic Feet per second, making it the largest waterfall in North America by flow rate. Over 90% of River Niagara flows into this fall while only 10% goes to the other two combined.

The Niagara Falls formed about 10,000 years ago during the end of the Ice Age and is a valued natural monument both because of its beauty and history.

How to Reach the Niagara Falls? Reaching by Air: De-board your plane on Buffalo/ Toronto Airport depending on which country you are visiting and then take a public service or taxi from the Airport to Niagara Falls.

Reaching By train: You can easily reach the waterfalls by train from both the sides as both the countries operate trains from their respective major cities to Niagara Falls.

The best time to visit the Niagara Falls is between the months of June and August, during the summer. Although it is also the peak time, which means it is overrun by crowds of people, the weather and activities make up for it. You can also visit the falls in winters, but major activities like Maid of the Mist boat ride are closed for business.

The best time of the day to visit the Niagara Falls, especially during the peak, is just after the opening timing when people are still yet to come or just before the closing time when most people have left.

Places to stay near Niagara Falls 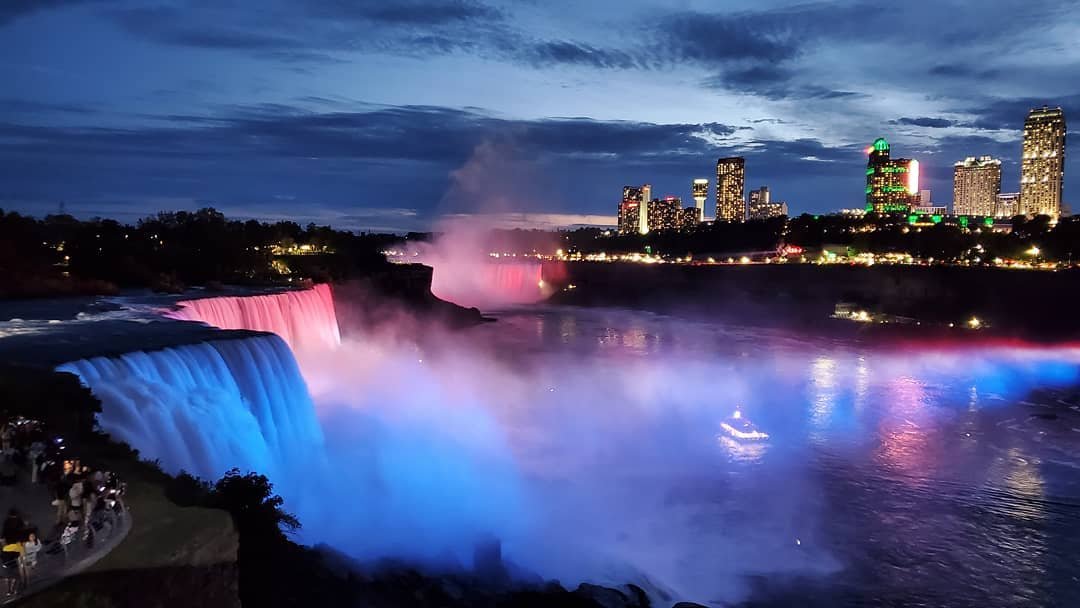 On the US side: Harvard Johnson Hotel and Casino, Wyndham Garden at Niagara Falls, Red Coach Inn, Four Points by Sheraton and Holiday Inn Niagara Falls.

Things to do at Niagara Falls

1. Tour the base of the Niagara Falls

It doesn’t matter if you are on the Canadian or the American side of the Niagara Falls, you should take a cruise to the base of the majestic waterfalls to make your trip remarkable and full of ecstatic moments. The boats take you real close to the falls and are a must-have experience if you are in the area.

For Canada: Hornblowers Catamaran
For the USA: Maid of the Mist Cruise

Visit the majestic Horseshoe Falls and at the marvel at its glory as humongous amounts of water fall down in an awe-inspiring fashion. The fall, which is shaped like a horseshoe, has a wide curvature and will make you feel as if you are completely surrounded by a waterfall.

Go aboard a helicopter and experience some of the most breathtaking views of the Waterfalls from up above in the Sky, these moments will always stay with you forever. The heli-hike will offer you the best views of the fall area, and it will surely become a moment to remember for life when you look below at the astounding fall from the scary height.