Last week, an elephant named Soutine was crossing a river in Kenya with her 3-week-old calf when the worst thing happened — the newborn calf lost his balance and was swept downstream by raging waters.

But the protective mother wasn’t going to let anything happen to her little son. In a video recorded by Matt Brierley, a photographer working with Save the Elephants, Soutine leaps into the river after her baby. 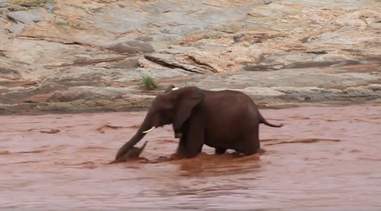 She takes several big leaps through the water before she can catch her calf with her outstretched trunk. But her baby continues to struggle — the current keeps pulling him away from his mom, and he seems to have trouble keeping his trunk above water to breathe.

Eventually, Soutine manages to push her baby between her legs, which protects him from getting dragged away. Then she trudges across the riverbed, carefully guiding her baby to shore.

While the video is heartwarming, the clip isn’t just about a mother elephant saving her baby — it also shows the sad effects of elephant poaching. Soutine’s own mother, Chagall, was likely killed by poachers for her ivory, and Soutine has struggled to raise her first calf without her mother’s help and guidance.

When Chagall disappeared in 2012, Soutine was only around 10 years old, and she and her sister had to learn to fend for themselves. 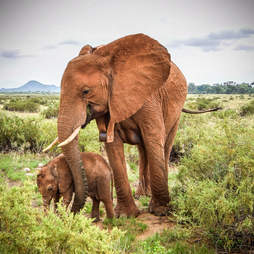 “We never found her body, as with many elephants who went missing outside the National Reserves in northern Kenya,” David Daballen, head of operations at Save the Elephants, told The Dodo. “The likelihood that Chagall was poached was very high as she disappeared at the height of the poaching crisis, and almost three quarters of all dead elephants we found at this time had been killed for their ivory.” 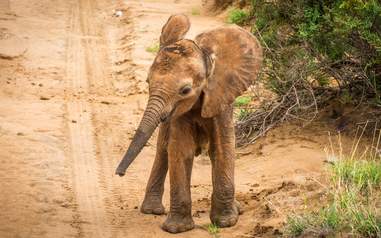 “We immediately knew something was wrong when we saw Chagall’s two young calves without their mother, hanging with a group called the Zodiacs who were unrelated to Chagall’s maternal group, the Artists,” Daballen added. “Despite searching, we never found Chagall.”

As orphans, Soutine and her sister lived on the periphery of their herd, which made life very difficult for them.

“When an elephant is killed, especially an older female, it’s not necessarily just that individual elephant that suffers,” Daballen said. “Her death can affect an entire family — young elephants are left as orphans, inexperienced females suffer without the knowledge and experience passed down to them and their calves suffer as well.”

When Soutine became a mother herself, she continued to struggle. She’s also remained at the edge of her herd. In fact, Daballen believes that Soutine was trying to rejoin her herd when she attempted to cross the river with her newborn. 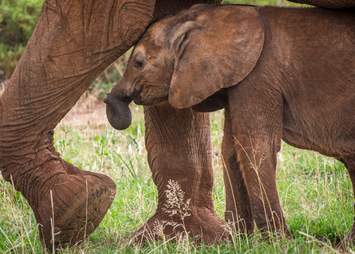 “The most heartbreaking thing is watching such a young mother struggling to raise her young calf without any help,” Daballen said. “As an orphan, Soutine doesn’t have the guidance or support of older females or her mother and has to go through this huge learning curve alone.”

“When poachers remove the elder females from the herd — the ones with all the experience and knowledge which they would normally pass down through the generations — it’s often the inexperienced young females who suffer,” Daballen added. “Soutine and her baby are prime examples.” 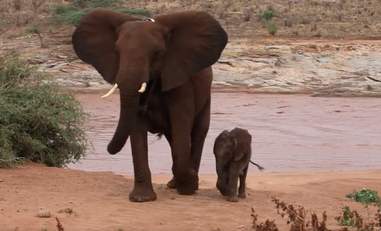 Despite not having Chagall, Soutine is proving to be a competent and very caring mother — and the video shows that Soutine will do everything she can to protect her calf.

By the end of the video, Soutine and her baby safely emerge from the river, and they walk side by side along the shore. Then the calf nuzzles into his mother and begins to nurse.