The day began as the mother bear slowly woke up, paused on a log and thought about the day ahead for herself and her growing boys. Her two sons, who were not sleepy, had their own plans. They usually began mornings raring to start their day with a good action-packed play fight as they followed their mom through the forest. 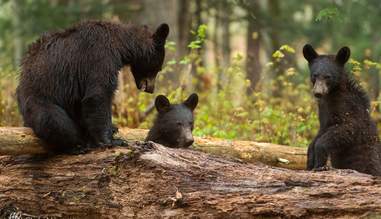 On this morning their mom decided to join in with her two boys as the family rumbled and played for almost an hour in the forest together. 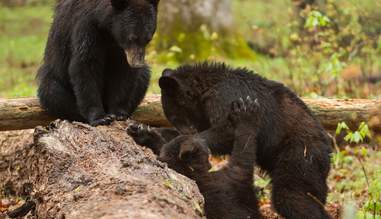 Their mom knows play is good for her boys because it teaches them how to defend themselves later in life when she will not be around to protect them. She’s within two months of sending them off to live on their own, so they need all the survival lessons she can teach them. 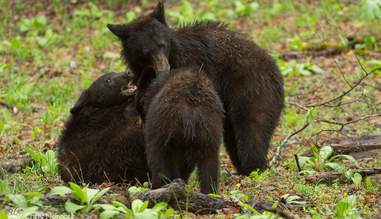 After some playtime with her boys, mom decided it was time to search for some food in the forest, finding fresh spring greens and newly formed buds from the trees bears enjoy eating from. Her boys continued to play nearby. 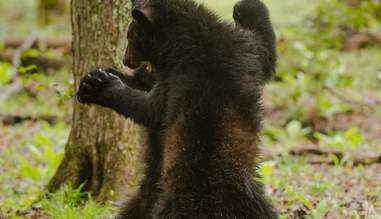 As I was photographing their play I noticed that the boys were not obeying any ethical play fight rules! To my surprise, one of the siblings threw a punch at his brother’s groin area but missed. 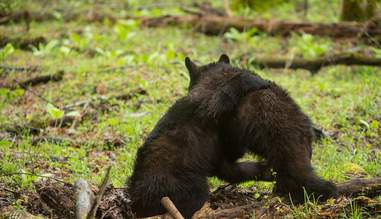 He would quickly realize his mistake as his brother returned with a kick into HIS groin knocking him to the ground. 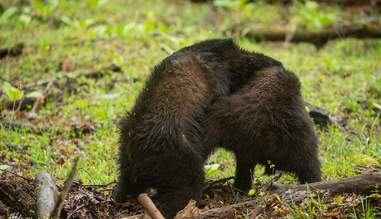 Just as this happened, mom was leaving the area and the boys knew they needed to follow her. The brother with the accurate kicking skills helped his sore brother up off the forest floor and led him in the direction of their mom. 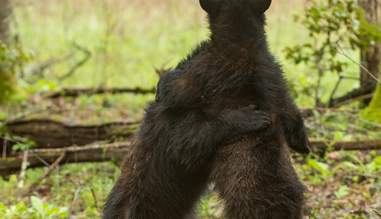 Another day in the life of this mother and her two boys was well underway. Time of play turned into time of searching for food sources to consume in order to survive in the wild.

8 Fascinating Things to Know About Beavers