It was the sweetest thing 💗

Earlier this month, Roland Rydstrom opened the blinds to let the morning light into his home in Anchorage, Alaska. He was getting ready to sit down to work, but what he saw out the window was quite a distraction.

A mother moose and her twin calves lay in his backyard, basking in the sun. 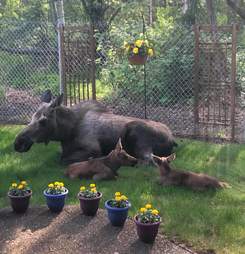 He knew that about 12 days ago, two moms had given birth to twins in the woods surrounding his neighborhood, but he usually only caught glimpses of the little families as they passed through his yard.

This mama moose and her babies showed no interest in moving on — seeming perfectly content to use Rydstrom’s backyard as their nursery for the day.

He knew that catching the moose family in such an intimate moment was special, so he snapped a few photos with his phone. 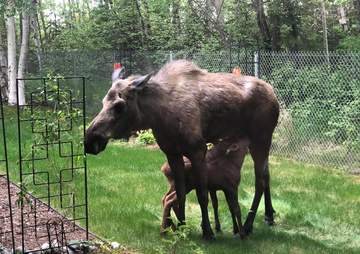 “I sat down to work, and fully expected the moose to walk away and they didn’t,” Rydstrom told The Dodo. “They would just change positions and, as you can tell from the pictures, they just kind of moved around to meet the sun — the babies in particular.” 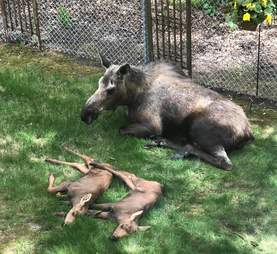 “It was fantastic to see the babies lounging together,” he added. “They would just kind of get up and move positions every once in a while.” 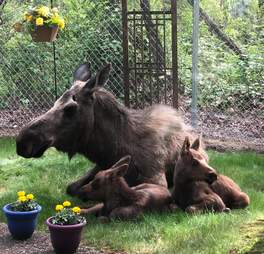 Rydstrom kept an eye on the moose as he worked from the safety of his window. “We do know these are wild animals,” Rydstrom said. “Especially with a mom and her babies, we would always respect their space and give them space to lounge as they did.”

At one point, one of the babies knocked over his marigold pot. It looked to Rydstrom as if the little animal was scratching his head on the pot, but when it tipped over, the mischievous smile on the baby’s face told another story. 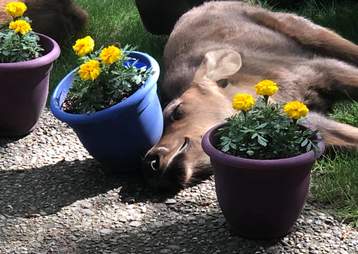 The moose family also left twice and, to Rydstrom’s surprise, came back twice. “They got up at some point and walked away and I thought they’d be gone, but they came back and did it again,” Rydstrom said. “They tasted everything on their way out, and do what babies do, putting everything in their mouth.” 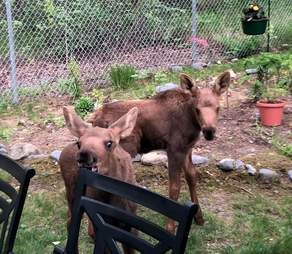 Around 7 p.m., Rydstrom heard a loud noise coming from his backyard and rushed to the window.

“All of a sudden, I realized the other cow and her calves were running through our backyard and ran through that family,” Rydstrom said. “The mom and babies jumped up and took off after them. It was an action-packed day.” 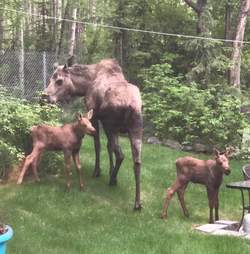 If the moose ever want to come back to his yard for the day, Rydstrom’s happy to babysit.