Fresh seafood is topped with a passionfruit custard sauce and a banana here, and it’s more delicious than you think. 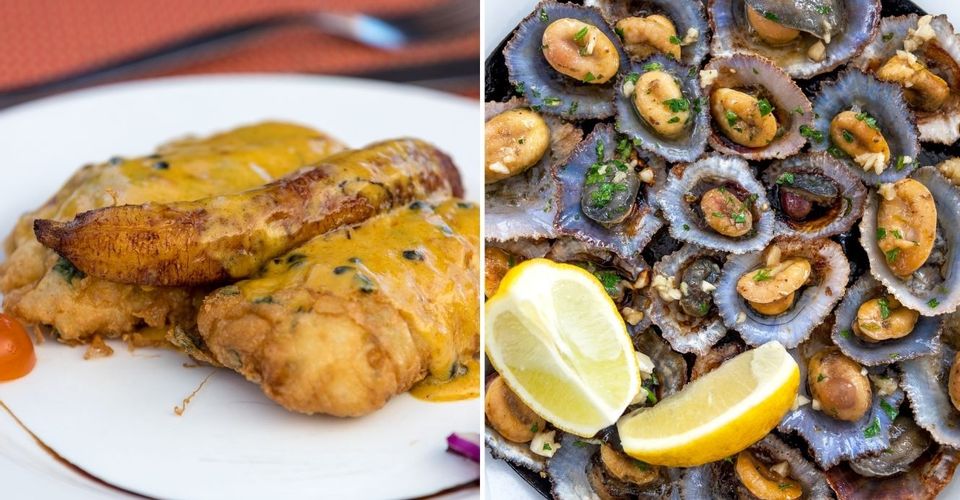 The small autonomous region off the coast of Portugal is known as Madeira, and this island is actually an archipelago that’s made up of four smaller islands. It’s often overshadowed by those who set their sights on Portugal but it shouldn’t be, and its regional cuisine is one of the reasons why (along with its incredible nature and views). There’s nothing not to love about this Portuguese-style of cooking, with its exotic twists and turns that take travelers on a flavor journey from dish to dish.

Inspired mostly by local ingredients, these dishes are dynamic in their own right, with each one featuring a whole range of new flavors that most people have never experienced before. If you weren’t considering Madeira as a future travel destination before – or even sooner, for those who have been vaccinated already – then you probably should.

This dish might seem a bit strange to anyone who has never had a banana outside of breakfast or bread but it’s actually one of the most popular dishes in Madeira. Some consider it the unofficial dish of the region and chances are, you’re not likely to find it on the mainland of Portugal or anywhere else outside of this archipelago.

The base of the dish is scabbard (which we’ll talk about later on, too) which has been breaded and fried, then topped with a fried banana and a passionfruit and custard sauce. The combination might seem strange thanks to its exotic nature but that’s also what makes it so unbelievably delicious.

From the outside, espetada looks just like a typical skewer or kebab, and that’s essentially what it is. Most commonly, the grilled meat of choice is either beef or veal, both of which are seasoned with a blend of garlic, salt, and pepper, and are then fried with olive oil, wine, bay leaves, butter, and tomato puree.

The result is tender cubes of meat that pack on the flavor and need nothing other than the side of fries that’s usually served along with it. This is a common dish for groups to split and is usually a side, snack, or starter.

This is the regional bread of Madeira and no trip to the island is complete without trying it. You see, this isn’t just any ordinary piece of bread; bolo de caco is cooked on a stone slab, as is traditional, before being served with garlic butter.

This bread can be found all over Madeira and most commonly in the bakeries around the archipelago, and, sometimes, it can even be found with unique fillings such as meat or cheese. It’s delicious whether it’s eaten on its own with flavored butter or as a sandwich and is definitely something that represents the country’s roots and flavors.

This specialty of Madeira is perfect for seafood lovers who like something that feels a little adventurous. Limpets, also known as lapas, are similar to clams but have a texture that’s slightly chewier but this doesn’t make them unappetizing by any means.

Rather, it adds a meatiness that many other clams lack. These lapas are usually served up right from the pan that they were cooked in and often come with a side of lemon and bolo de caco for soaking up juices.

Okay okay, it’s not a dish, per se, but it is a very important part of Madeira’s culture. Madeira wine has made a name for itself in the region and, again, no trip to this archipelago is truly complete without sampling some of the island’s finest.

While the port is famous on the mainland of Portugal, Madeira wine has fallen somewhat behind as many people don’t realize what gems lie just off the coast. Madeira might not necessarily outrank port in terms of flavor and fullness, it is a nice contrast to the mainland wine and worth giving a shot.

If we’re being completely honest, the scabbard fish itself is quite terrifying to look at. It’s so scary, in fact, that it often makes one wonder how a person could look at it and decide that it could make for a good meal – but we’re certainly glad that they did.

Also known as Espada, this fish can be found in most restaurants throughout Madeira and is served in the traditional way, with a banana and passionfruit custard sauce. This brings out the natural flavors of the fish and provides a balance that’s so delicious, it shouldn’t even be legal in a dish.

Here’s Why Sintra is the Capital of Portugal’s Romanticism

How To Spend 48 Hours in Lisbon