She was so furry she could barely walk — and was SO grateful to get her first haircut.

For years, Teddy the sheep used to live with a family in Manitoba, Canada. But one day, her family moved away and left her behind — and never came back for her.

The family was long gone by the time the landlord discovered the scared sheep hidden inside the barn. Her pen was filthy, and she was shut up in the barn with a chicken who had died in there. While it isn’t known how long Teddy had been locked up in there, it was clear she hadn’t been loved or cared for since even before her family left. 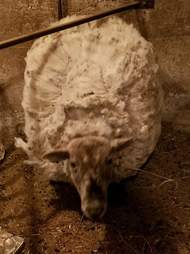 Two women who knew the landlord stepped in to help. They contacted Karl and Raelle Schoenrock, cofounders of Kismet Creek Farm, a local animal sanctuary in Manitoba, and asked for their help.

When they got the call in late April, the Schoenrocks were away on a family vacation, so one of the women took the sheep home with her for a couple of days. And as soon as the Schoenrocks returned, they went to get the sheep.

To Raelle Schoenrock, one of the most shocking things about the sheep’s condition was her overgrown fleece.

“We don’t know how long she had gone without shearing, but it had to have been years and years,” Raelle Schoenrock told The Dodo. “Her fleece was over a foot long in some areas, and the whole back end of her was matted black with rank urine.” 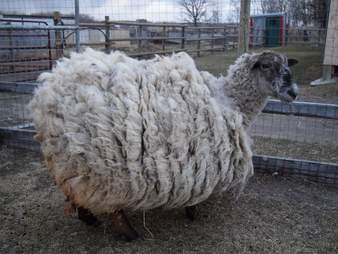 The Schoenrocks decided to name the sheep Teddy.

“There’s a children’s book called ‘Little Teddy Left Behind’ that I bought over a decade ago for my niece,” Raelle Schoenrock said. “A beloved teddy bear gets lost when his kids move, and goes on a series of harrowing adventures until fate reunites him with his family.” 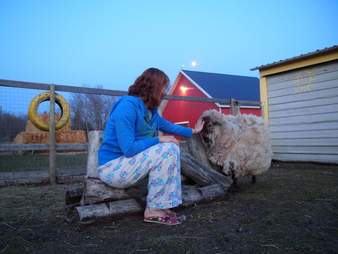 While Teddy wasn’t going to be reunited with her former owners, she had a new family now — and the Schoenrocks did everything they could to help Teddy settle into her new home. Initially, Teddy had to stay in quarantine, but they made it as nice as possible for her, and made sure she had plenty of hay and water.

“That night, I just sat in the pen with her,” Raelle Schoenrock said. “I talked to her, told her she was safe. She met our chickens, and all our large animals (the cattle and horses) came over to the fence to look at her. Our cats came to say ‘hi,’ and Teddy was very curious about them. We had volunteers visit her, and I continued to sit in her pen with her.” 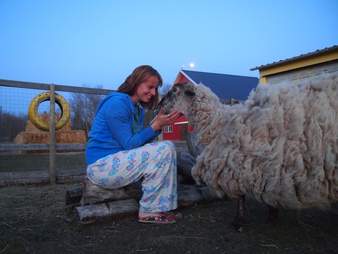 The next day, Teddy was checked over by a vet, and she turned out to be in pretty good shape. However, she badly needed to be shorn — an overgrown fleece can make it difficult for animals to move around, and if they fall over, they may not be able to get up again.

They sheared Teddy over the course of two days, eventually removing 16 pounds of fleece. 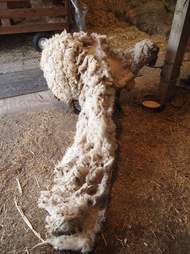 “We worked on her for about an hour and a half total that first night, with lots of breaks and treats,” Raelle Schoenrock said. “We do most of the shearing with the sheep standing up, to minimize stress. We stop often and one of us clips, while the other gives a massage and lots of hugs and scratches.” 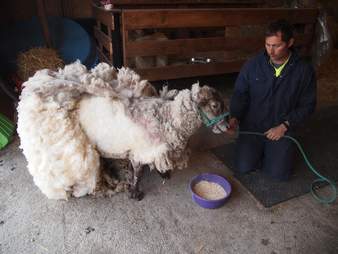 “The second night took about the same amount of time, and we almost got everything done — except our clippers actually died on us right as we were about to trim Teddy’s neck,” she added. “But we decided she looked good enough!” 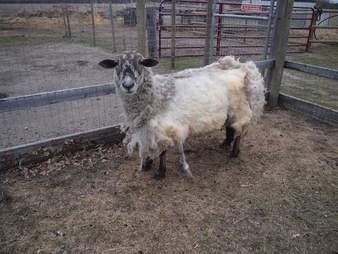 “Before the haircut, she really only got up to walk over to her food,” Raelle Schoenrock said. “After her first haircut she was grazing and exploring and sniffing the horses through the fence. After her second haircut, we introduced her to the other sheep and goats she now lives with. The integration went really smoothly, just lots of sniffing and checking each other out.” 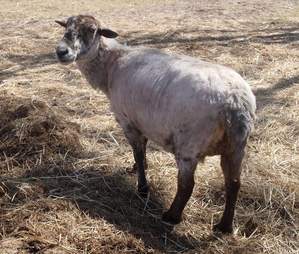 After being abandoned by her first family, Teddy had every reason not to like people — but she’s slowly learning to trust people again, and she now seeks out affection from sanctuary visitors.

“Teddy is a sweet and gentle sheep,” Raelle Schoenrock said. “She approaches people in calm situations on her terms. If you sit near her, she’ll come to you and sniff your hand and allow some gentle pets.” 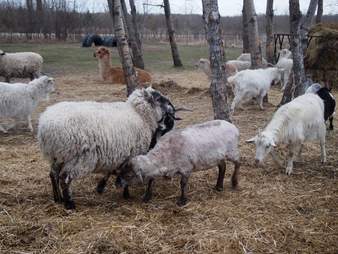 Raelle Schoenrock has formed a particularly strong bond with Teddy.

“When I look at Teddy, and she looks at me, I feel her gratitude and I know she knows that we helped her,” she said. “Being a part of Teddy’s rescue feels amazing. It’s what I was put on Earth to do, help animals. It’s my passion and my calling and every time we save another life and I get to see them thrive here, it fills me with overwhelming joy.”