They say love knows no bounds, and that is definitely true of an abandoned elephant and giraffe who have formed an adorable bond after being rescued in Nairobi.

Baby giraffe Kiko was brought to a wildlife trust in the Nairobi National Park after being found helpless and alone by Kenya Wildlife Service.

At one-month-old, he was too small to sleep in the giraffe stable but was instead housed next to the elephants, where he struck up an unlikely friendship with fellow orphan Loboito, a boisterous three-week-old calf. 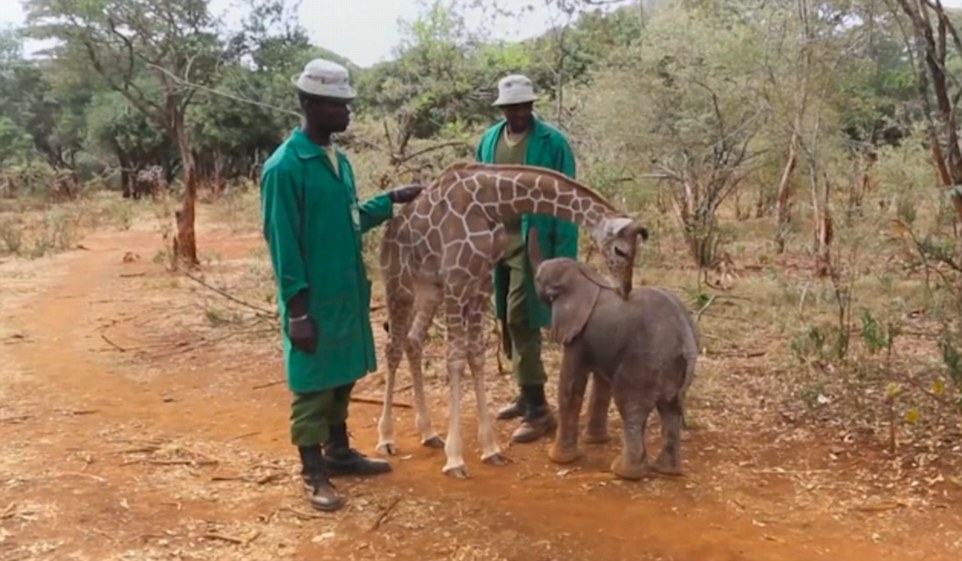 They say love knows no bounds, and that is definitely true of an abandoned elephant and giraffe who have formed an adorable bond after being rescued in Nairobi 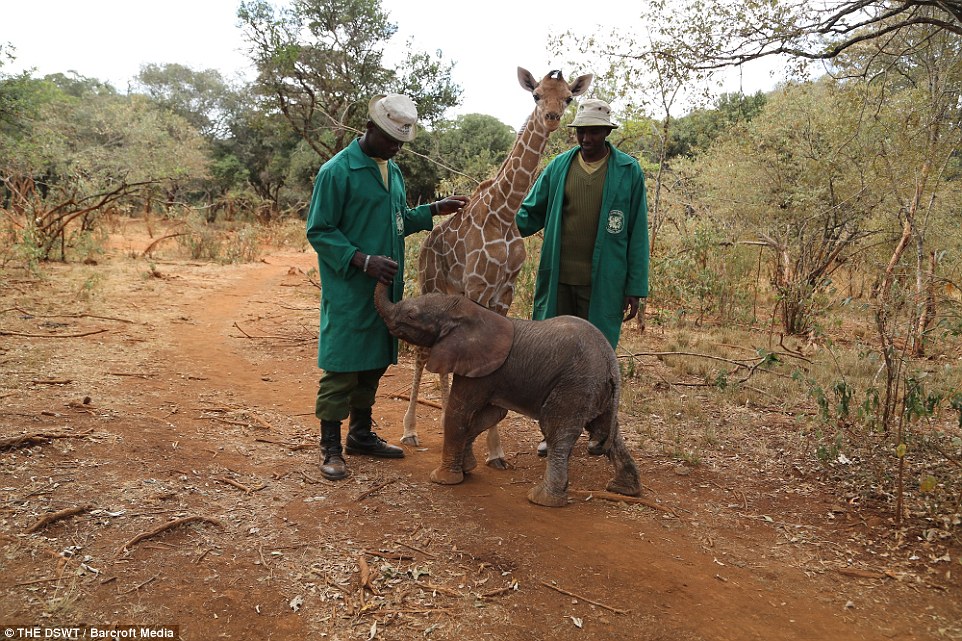 After being rescued, the pair were housed next to each other as Kiko was too small to sleep in the giraffe stables 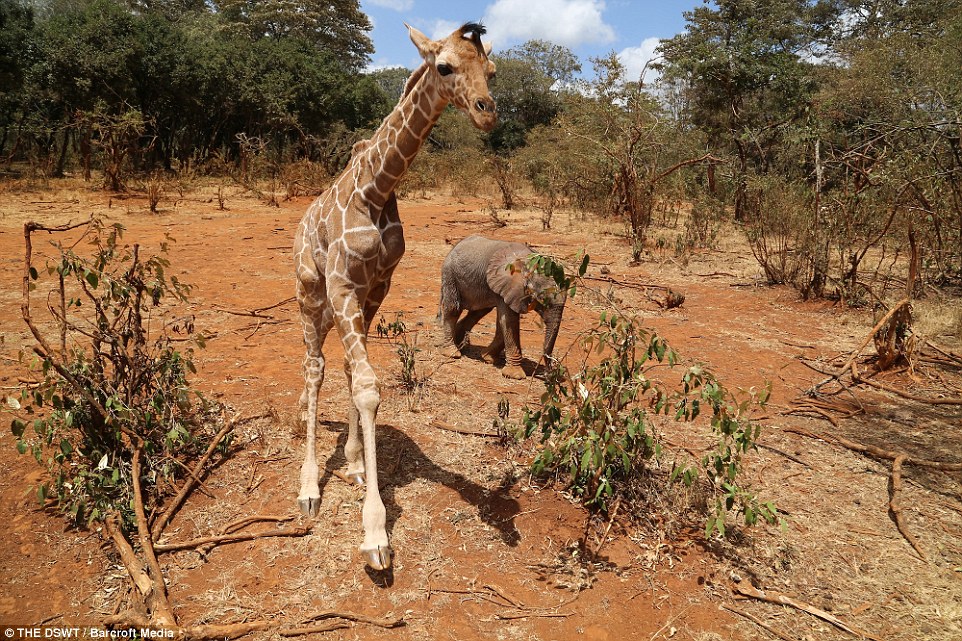 Wait for me: Loboito the elephant can be seen struggling to keep up when trotting behind his leggy friend

Heart-warming footage captured in October shows the small giraffe frolicking and playing with his newfound chum, who was brought in after being found alone and hungry in Samburu.

Neither of the adorable friends would have survived in the wild as they are still solely reliant on their mother’s milk, but thanks to the David Sheldrick Wildlife Trust Orphanage they are being given a new chance at life.

And what baby Loboito lacks in size, compared to his leggy friend, he more than makes up for in enthusiasm.

As rescued Kiko strolls through the orphanage, the eager elephant can be seen trotting excitedly behind, desperate to keep up with his spotted companion.

According to the wildlife trust, the tiny calf loves nothing more than to spend his time under the long legs of his buddy.

When he does manage to catch up, the incredible clips show Kiko bending down to nuzzle cheeky Loboito.

Although the pair are still bottle-fed, staff note they will soon require a ladder to reach the fast-growing Kiko. 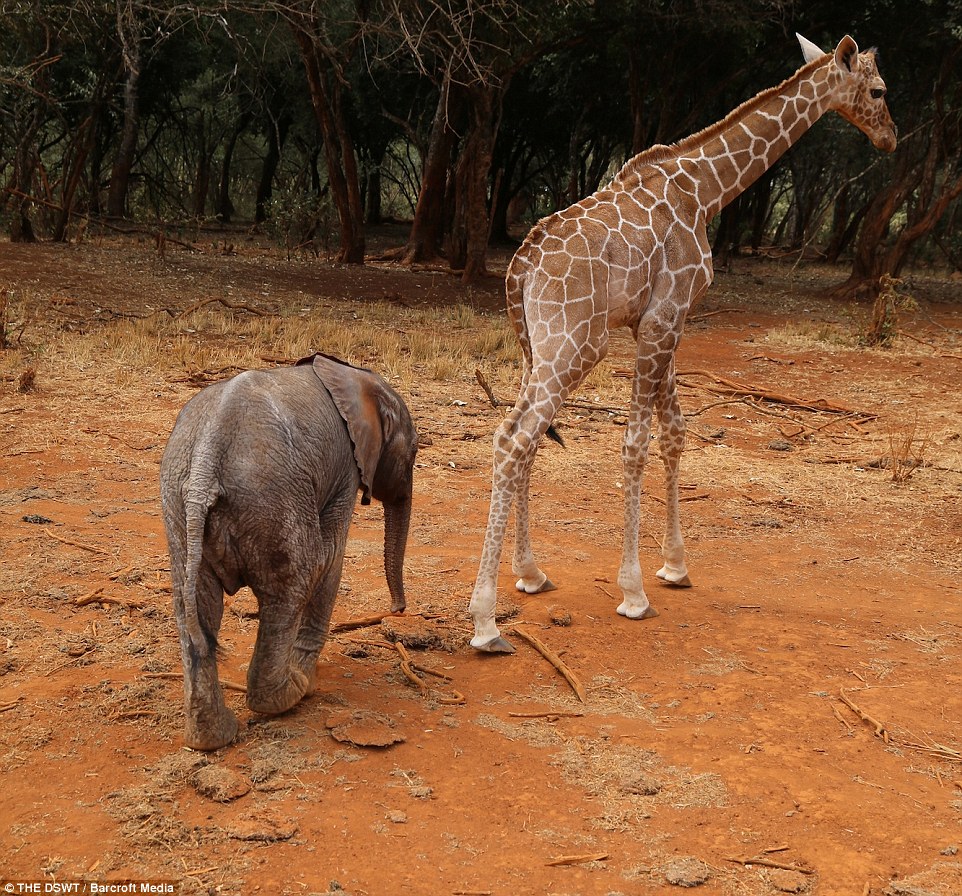 According to the wildlife trust, the tiny elephant loves nothing more than to spend time under the long legs of his buddy 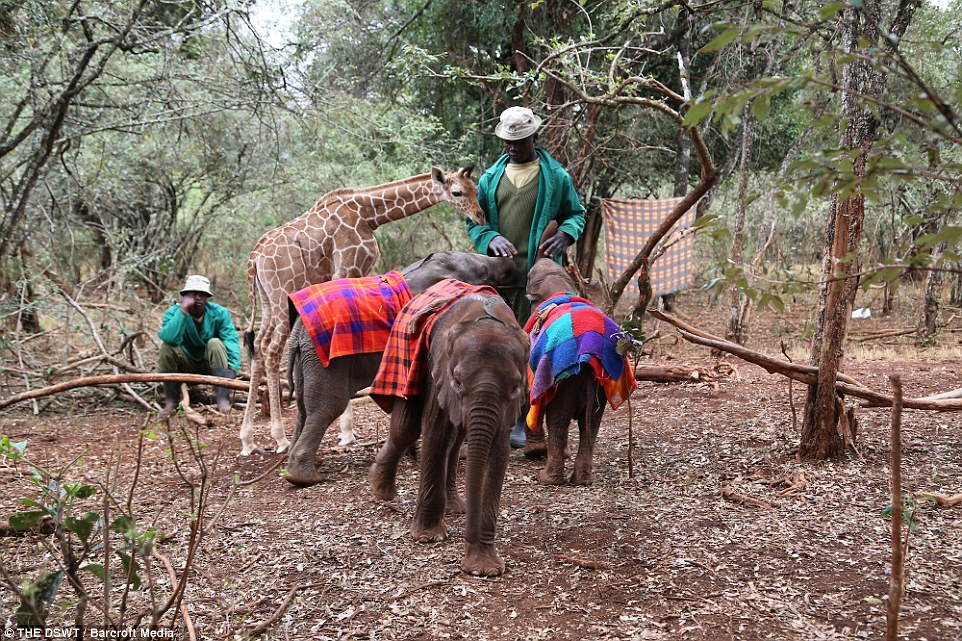 Second chance: The keepers are surrogate parents for the orphaned animals, who have all had a sad start to life

The lovable babies never get bored as they have plenty of playmates to keep them entertained.

Donning colored coats, other excitable elephants can be seen queuing up with Kiko and Loboito to be stroked and fed by their carers.

Sadly elephants and giraffes in the National Park still face danger from poachers, with giraffe numbers said to have fallen by 30 percent over the last decade.

Rob Brandford is the Executive Director of the David Sheldrick Wildlife Trust (UK).

He said: ‘Kiko is extremely trusting and affectionate with his carers and has been from the moment he was rescued and he loves spending time with the youngest elephant calves.

And Rob revealed that without the heroic efforts of the rescue team and the carers, both animals would not be alive today.

He said: ‘Both animals could not have survived in the wild without their mother’s milk.

‘They are being given specialist care until they are old enough to be reintegrated back into the wild.

‘Our dedicated team of keepers substitute for the orphans’ families and are with the babies 24 hours a day – even sleeping alongside them in their stable at night.’ 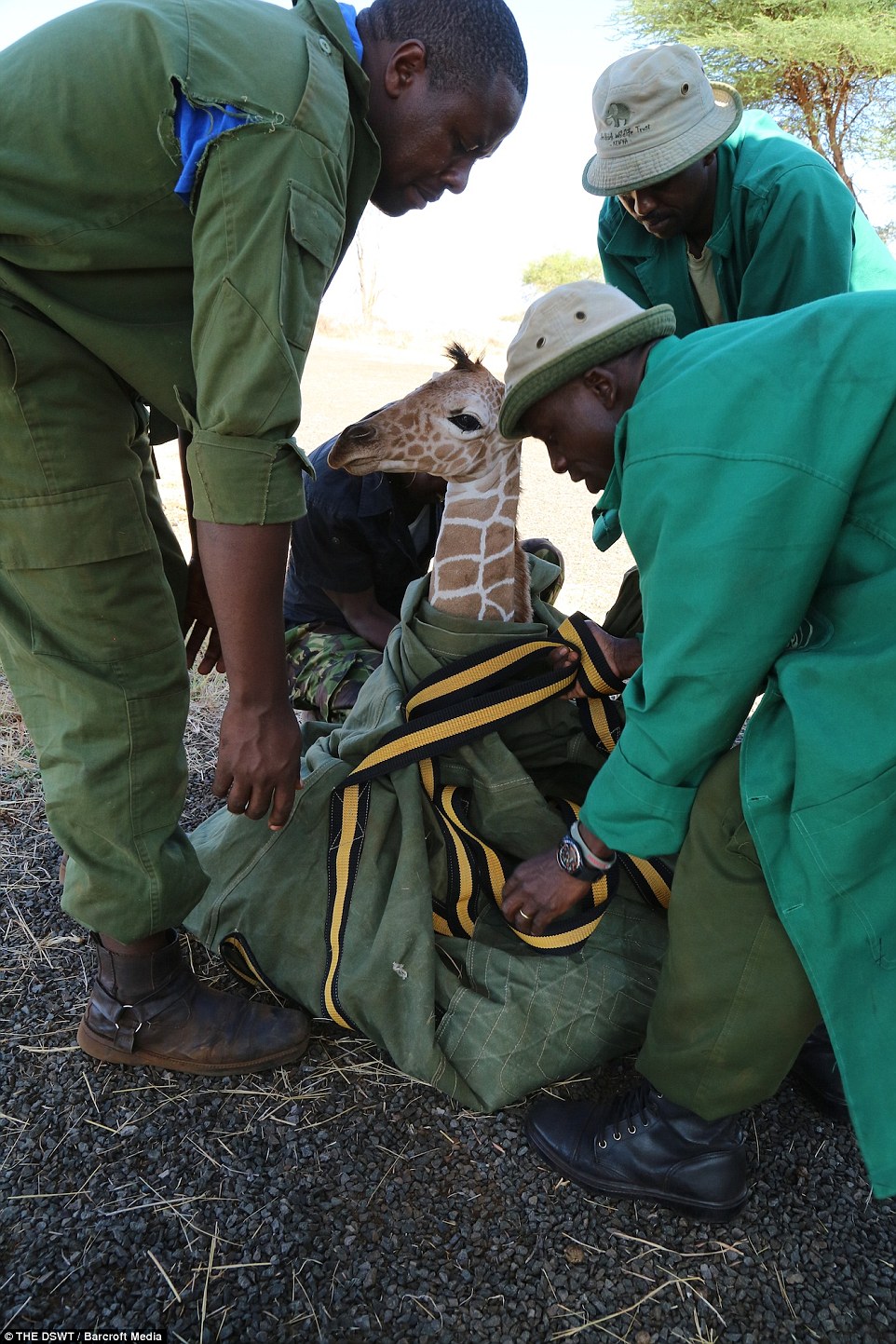 Playmates: Kiko the baby giraffe goes for a stroll with some of his new friends who are wearing coloured coats

Tall order: The clip shows Kiko being given a drink by keepers, although the pair are still bottle-fed, staff note they will soon require a ladder to reach the growing giraffe 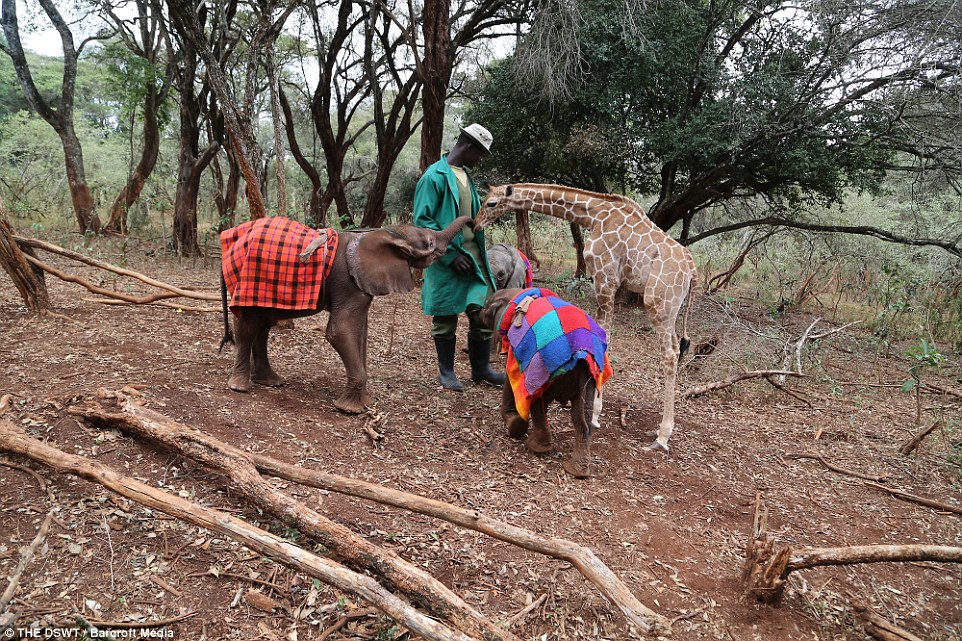 Playtime: The animals queue up to be fed and played with by one of the keepers in the trust 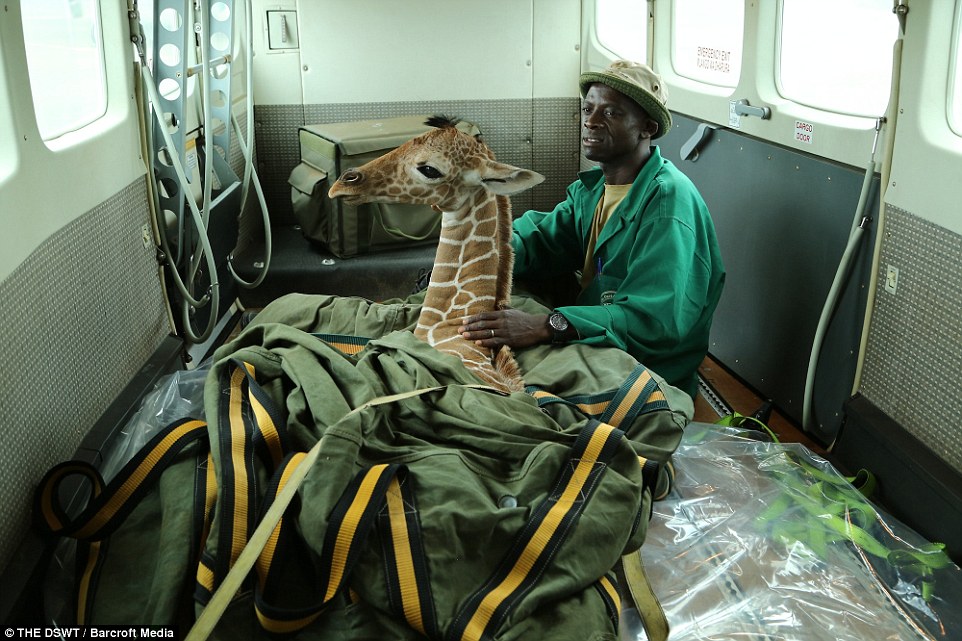 Sad start to life: Kiko was rescued after being found abandoned in Kenya’s Meru National Park in September 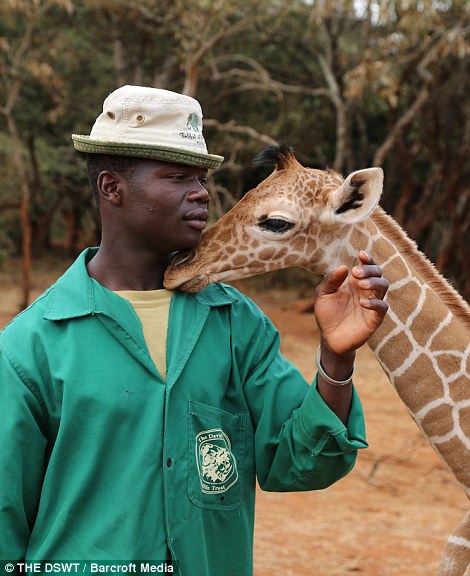 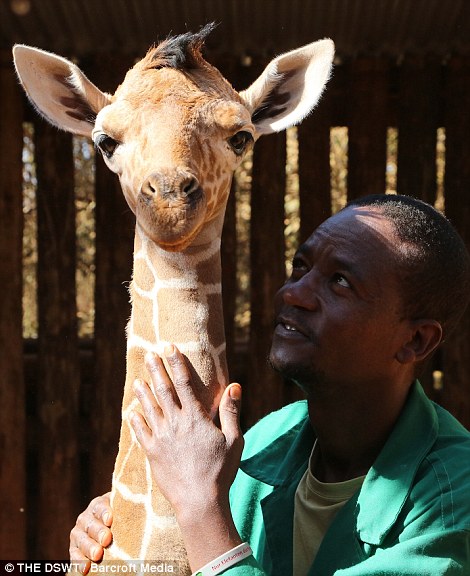 Special bond: The animals are given round the clock care until they are old enough to be reintegrated back into the wild 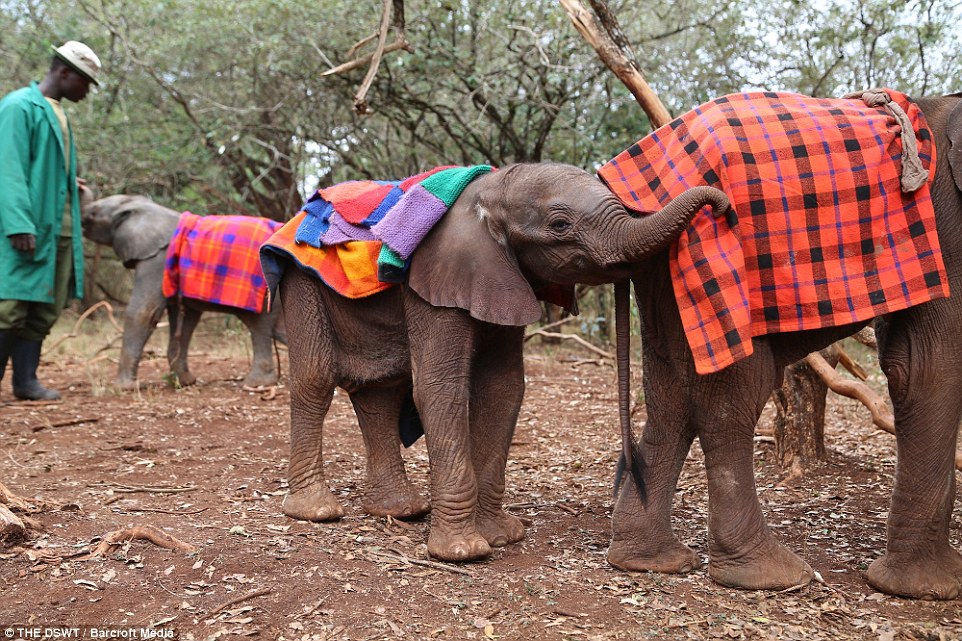 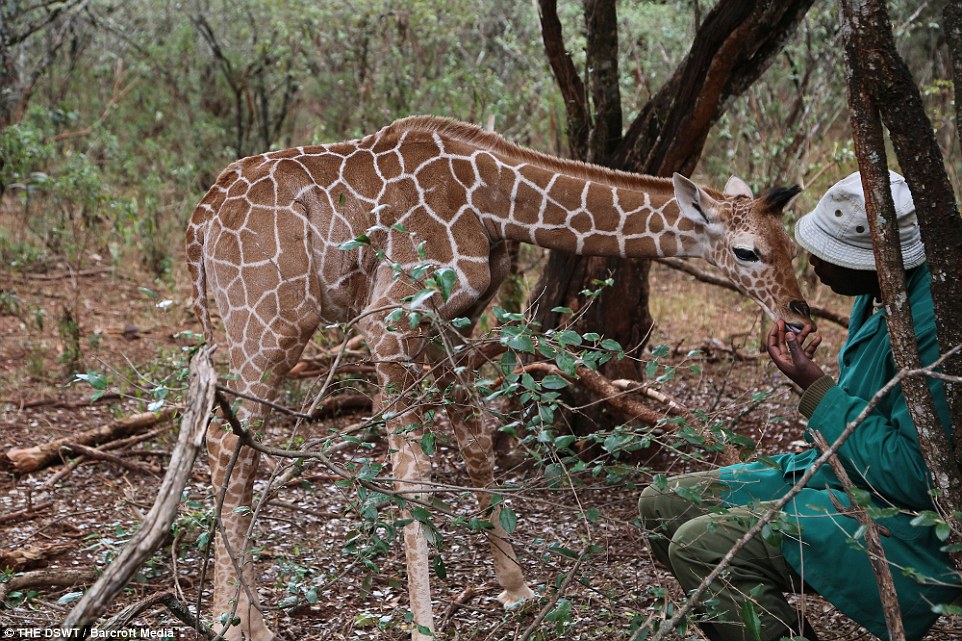 Caring attention: One of the keepers gives Kiko some love and affection at the wildlife trust

Hero herd to the rescue! Elephant calf is rescued by its elders as lions try to bring it down

Elephants Kept In Pit Want To Get Out So Badly