Are sweets sinful? Not in Portugal, where monks and nuns have been whipping up the most heavenly desserts for centuries. Here, we bring you seven of the country’s favourite sweet treats and recommend the best places to sample them in the capital.

Sweet temptation is everywhere in Portugal. It’s a country where you can barely turn a corner without being lured into another confeitaria or pastelaria for a crisp, oven-warm pastel de nata (custard tart) or a fluffy, bite-size queijada (cheesecake) to go with your early morning espresso. The Portuguese rarely resist, so take their lead, follow the fabrico próprio (‘made in house’) signs and get ready to indulge.

The heavenly history of Portugal’s desserts

To understand Portugal’s national obsession with cakes, sweets and desserts, you need to rewind to the 15th-century Age of Discoveries, when the country was riding the waves in the pursuit of land, power and riches. Intrepid navigators set sail for the new world, establishing trade routes and bringing back coffers brimming with exotic spices from the Azores, Africa, America and Asia.

Many explorers gave these as gifts to monasteries and convents, where the inmates prayed for their mortal souls while they braved the storm-tossed oceans. And so the tradition of making doces conventuais (conventual sweets) began. With plenty of time on their hands, the monks and nuns began to whip up delicious desserts using sugar and spices from those far-off lands. They added cinnamon, vanilla, coconut and orange to eggs, butter and flour, often giving their new creations spiritual names. These went down a treat with the royals and aristocrats of the great kingdom, and these recipes have changed little in the centuries since.

Here are seven sweet Portuguese treats you must try when visiting the country.

Quite literally full of beans (feijões), this flaky puff-pastry tartlet might blow your mind with its buttery, caramelised crunch and rich, unctuous egg yolk, almond and white-bean cream. It was created by Joaquina Rodrigues in the coastal city of Torres Vedras in the late 19th century, who served it only to family and friends. Yet the word eventually got out, and now it’s a firm Portuguese pastelaria favourite. You can even kid yourself that the bean bit makes it healthy. 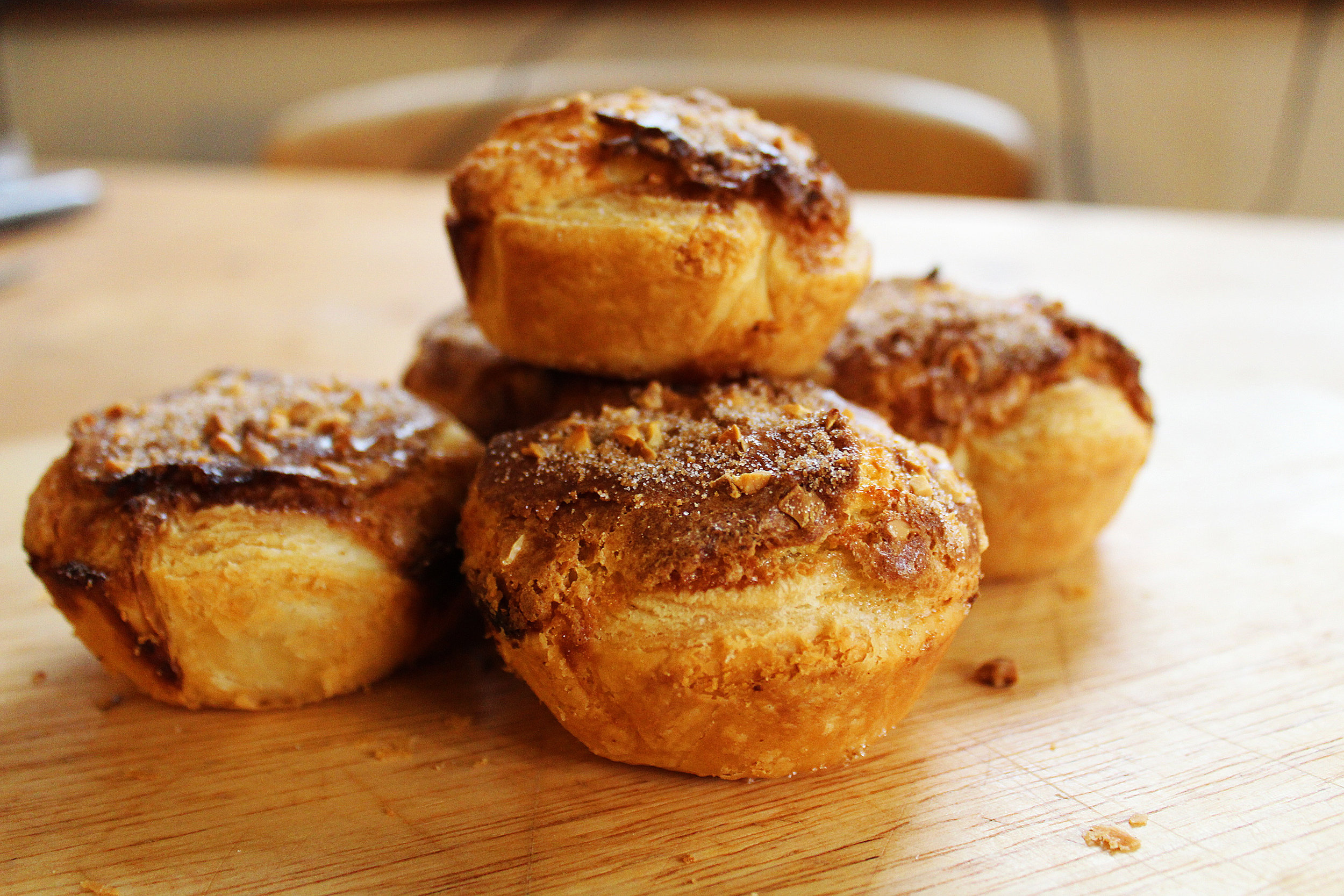 Nowhere in Lisbon does a better pastel de feijão than the Fábrica do Pastel de Feijão (Rua dos Remédios 33), tucked away in the Alfama district. Here, chef António Amorim has subtly improved the art by making them rectangular in shape (read: bigger).

Mention the bola de Berlim to the Portuguese and watch them sigh with nostalgia. It seems everyone has a favourite childhood tale to tell about biting into one of these fluffy, egg cream-filled, sugar-coated dough balls – a local take (hence the name) on Germany’s Berliner doughnuts. But they are different: the Portuguese version is sliced lengthwise to give room for a thicker, oozier filling. On beaches across the country, vendors brave the heat, sand and flying bats and balls to bring sunbathers these sticky treats, bearing boxes filled with bolinhas (‘little balls’).

Besides the beach, you can grab a bola de Berlim at numerous pastelarias in Lisbon, but the best are those sold in myriad flavours at Berlineta (Estação de Santa Apolónia). Try the beetroot, carob and activated-charcoal versions if you’re feeling adventurous. Vegans are also catered for.

On paper, the ingredients appear deliciously simple: flour, eggs, sugar, cinnamon and fresh cheese. But in reality, the queijada is a thing of beauty: a paper-thin pastry case with a marzipan-like cheesecake filling and a caramelised top. A couple of bites and it’s gone – and you’ll crave another. While you’ll find queijadas all over Portugal, some of the very best come from Sintra, a UNESCO World Heritage town of fantastical palaces that is an easy day trip from Lisbon.

Here, the nuns once kept the faith by baking these delights to use up a surplus of fresh cheese from the surrounding pastures, occasionally flavouring them with almonds, oranges, coconut and honey. Word has it they were once used as a form of payment.

For the real deal, head to the old-school Fábrica das Verdadeiras Queijadas da Sapa (Volta Duche 12), a bakery founded in 1756, and either scoff them straight away or buy a half-dozen to take away, hand-wrapped in vintage paper.

The travesseiro is a puff-pastry treat that flakes beautifully, filled with luscious egg and almond cream and dusted with sugar. This confection was dreamed up at Casa Piriquita, a bakery in Sintra that has been doing a brisk trade since 1862. The exact recipe is a well-guarded secret, but it’s said that during World War II, the family were dabbling in baking new sweets and stumbled across a book of old recipes that featured the travesseiro.

With a name like this, you might expect great things of this brioche-like bun, and chances are you won’t be disappointed. Perfect for breakfast with a bica (espresso) or as a more savoury snack (the Portuguese often pair it with cheese and ham), this fluffy, sweet bread owes its golden crunch to its coconut crust. Some are given a dash of rum, vanilla and lemon for extra punch.

Traditionally, pão de Deus is associated with the dia de todos os santos – All Saints’ Day or All Hallows’ Day, on 1 November. In a ritual similar to trick or treating, kids roam the streets, knocking on doors to ask for this bolinho (‘little cake’). 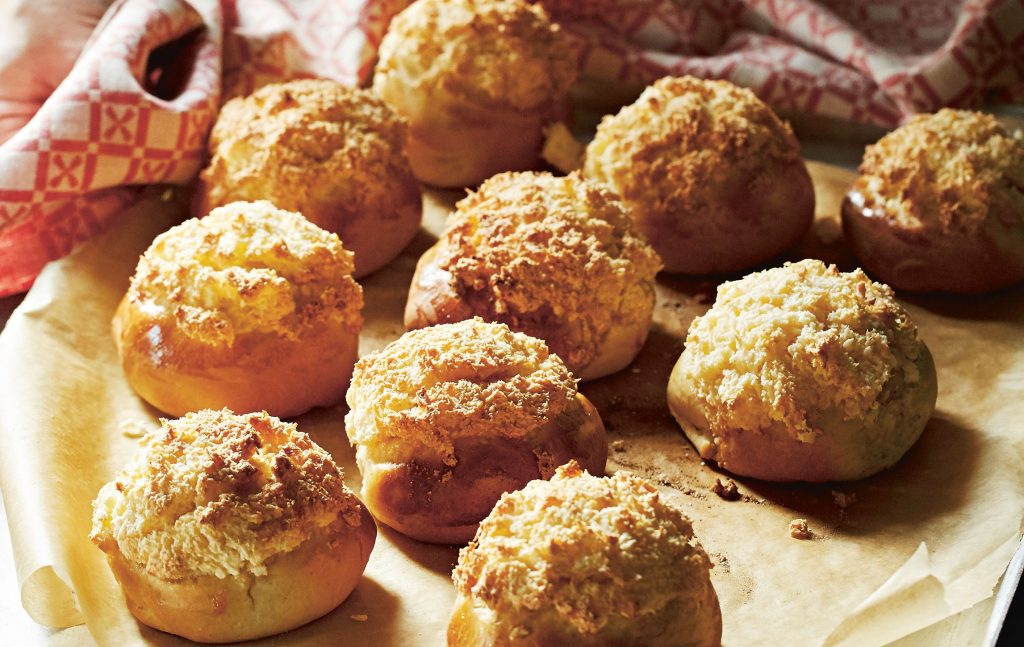 Pão de Deus is no longer reserved for All Saints’ Day. Find it at Lisbon patisseries such as Sacolinha (Rua Paiva de Andrada 4/12) and A Padaria Portuguesa (Rua Barata Salgueiro 30).

If you hadn’t guessed by now, the Portuguese are crazy about eggs in their sweets, especially the ovos moles (soft eggs) that come from the west-coast city of Aveiro. In the true spiritual tradition of doces conventuais, these rice-paper communion wafers are filled with an egg yolk and sugar cream, stirred over a precise heat until thick and rich. The melt-in-the-mouth wafers hint at Portugal’s nautical heritage, as they are shaped like shells, clams, whelks and barrels.

Rumour has it that the sweets were dreamed up long ago by a nun at Aveiro’s Convento de Jesus, who found them a cunning way to indulge in secret when she had been ordered to fast by the Mother Superior.

If you can’t get to Aveiro, the next best place has to be Lisbon’s Casa dos Ovos Moles (Calçada da Estrela 142). Incidentally, this is also a terrific spot to try toucinho do céu (‘bacon from heaven’), a dense almond cake made with pork fat.

We saved the best until last. Unless you’ve been living in a cave for the past decade, you will have undoubtedly come across Portugal’s globetrotting star sweet, the pastel de nata (custard tart), now devoured everywhere from Sydney to São Paulo. Best eaten warm from the oven, these tarts are utterly moreish: filled with a silky smooth egg vanilla cream, encased in flaky, caramelised puff pastry and dusted with cinnamon. One bite and you’re hooked – just as the monks at Jerónimos Monastery in Lisbon were back in the 19th century. As the story goes, when the dissolution of the monasteries took effect in 1834, the monks turned to sugar and baking to survive, rustling up a secret recipe for pastéis de Belém that remains unchanged to this day.

Some say you can’t beat the originals (since 1837) at Pastéis de Belém (Rua de Belém 84), but we’d argue that the pastéis de nata at former butter factory Manteigaria (Rua do Loreto 2) are every bit as good.

8 Non-Touristy Experiences to Have in Lisbon