A video has emerged of a goose battling an elephant in an amusing example of a David versus Goliath contest which proves that with tenacity and a determined focus even the most daunting odds can be beaten.

The battle of mind over very large matter erupted at the Hogle Zoo in Utah when Zuri, a young African elephant is challenged by a Canada goose whose aggression is so intense that it seems utterly oblivious to their obvious difference in size.

Despite a clear advantage on size, the adorable elephant cannot overpower the single-minded goose.

Zuri sprays water at the goose with its trunk but the goose will not budge, no matter how powerful the offensive.

The plucky bird then flies onto the elephants back and seems to peck aggressively at his neck.

It then flies just in front of Zuri, stands firm in the water with wings flapping and beak threatening attack.

The diminutive bird does not even back down when the elephant swings its trunk dangerously close.

Zuri then shoves the bird with its powerful trunk, and despite being momentarily knocked off balance, the bird quickly resumes its offensive on its much larger foe.

The bird chases the elephant which then charges back, knocking the bird back again.

Zuri then kicks the feathered crusader repeatedly, landing blows which could have been fatal for the bird.

But the tenacious Canada goose just flies at the elephant’s head in retaliation. 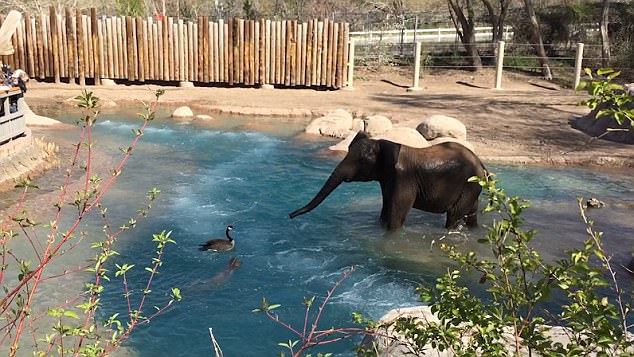 The battle continues and the goose returns to its original perch on a rock, where it chirps to what may be a young chicks hidden below.

The entertaining video was posted on YouTube and it sparked a lively conversation online.

Boris Berlin wrote on YouTube: ‘That’s one courageous goose. That back-kick could’ve easily taken her to heaven and back. I’m impressed!’

Cole Wagner wrote: ‘I love how he has to take time out to chase that chicken away, and then turns around to find himself immediately back at square one with the goose. The comedic timing is impeccable.’ 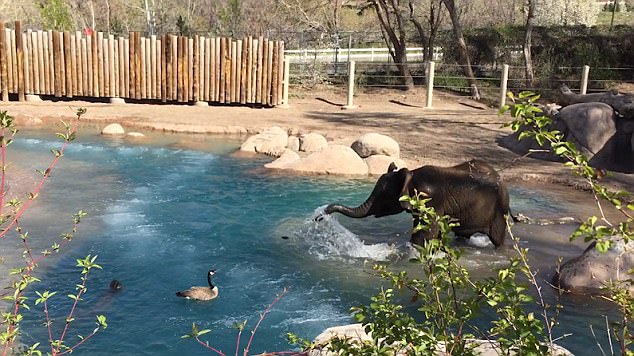 Stage Name wrote: ‘Geese are the true jerks of the animal kingdom. :)’

But Cheryl Snyder voiced concern for the elephant’s welfare, and wrote: ‘The elephant should not be penned up in such a small enclosure and with no other elephants. Not natural environment for elephants.’

But Denlow replied that the camera only showed a small part of the elephant enclosure: ‘This looks like the Hogle zoo Utah. If it is, you’re only seeing like a 1/4 of the exhibits size not including a large private area for the elephants behind the exhibit away from humans. Also, there are at least 2 other elephants off screen. This baby is Zuri, part of their successful breeding program and is very happy and healthy.’

And Skonenblades wrote: ‘Geese are cute until you’re on their turf or near their nest and then you suddenly realize how big and quick they are when they don’t back down and start hissing and charging.’

Heart-Warming Footage Of Baby Elephant Rushing To Save His Human Friend From D.r.o.w.n.i.n.g