This is the moment a curious elephant charged at an alarmed group of tourists – before just in front of them.

Retailer John Lucas, 47, was visiting the Knysna Elephant Park in Plettenberg Bay, South Africa, with his wife when they captured incredible footage.

He revealed how he and his wife stood frozen in fear while their guide warned them not to move a muscle.

John said the animal had heard the three visitors laughing and wasn’t used to the noise.

He ambled over to have a closer look before bluff charging them to make sure everything was safe.

The group of three stood their ground and didn’t move, despite John and his wife’s fear.

The elephant then slowed down as it realized they weren’t going to run.

John said: ‘We had stayed behind after the tourist bus left, so it was just us and the guide. 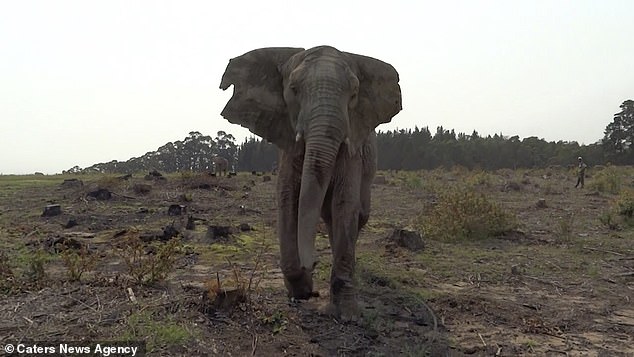 John Lucas, 47, was visiting the Knysna Elephant Park in Plettenberg Bay, South Africa with his wife when the elephant charged at them

‘We were talking and laughing, which is what attracted the elephant’s attention, as it was something it wasn’t used to.

‘When he started charging I held my camera to the midriff.

‘I wasn’t sure if it was switched on or not but I didn’t want to move. 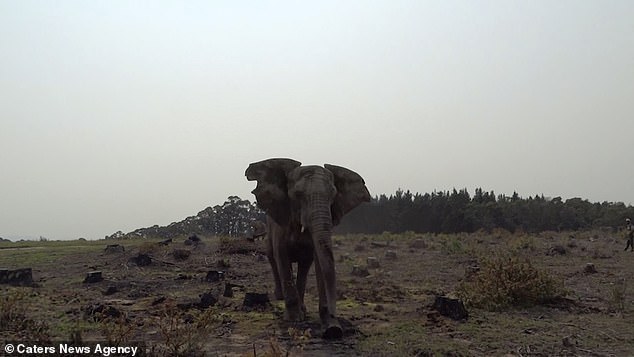 The husband and wife stood still, following the advice of their tour guide, and the animal eventually slowed down and stopped

‘Our guide whispered to the elephant as it approached and told us not to move, which was quite hard to do – my wife even hid behind the guide.

‘After the video ended, the elephant stared at us for a bit.

‘But because we weren’t joining in, it ran off into a herd of zebras.’