It’s hard to imagine a more picture-perfect setting for a Christmas market than Innsbruck in the Austrian Alps. Wooden chalets and gigantic Christmas trees are set up in the medieval town squares, fairytale figures line the narrow alleys and the scents of cinnamon, cloves and gingerbread waft through the air. And towering over the whole scene are the snow-capped mountains, right there, in the centre of the city. 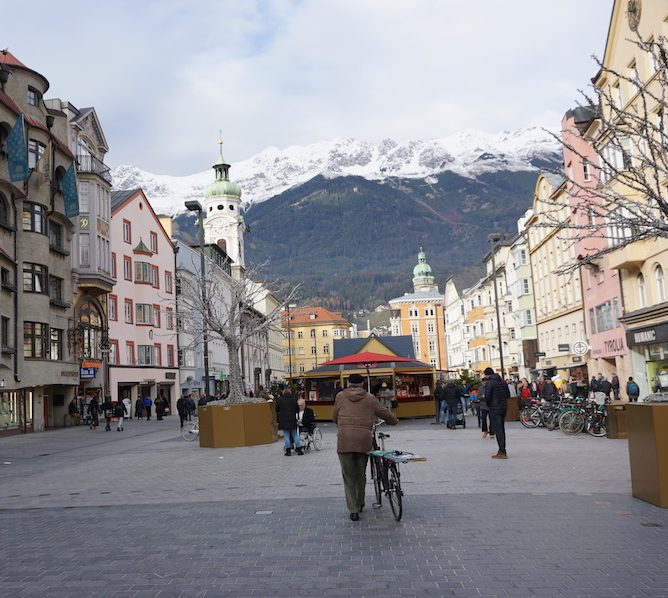 The Innsbruck Christmas market is an unforgettable experience. The sights, smells, sounds and tastes stay with you long after you’ve left. Standing next to the brightly lit Christmas tree in the Golden Roof square and taking your first sip of hot glühwein from one of the colourful Christmas market mugs, the smell of red wine mingled with cinnamon and orange so delightful that you just stand there, breathing in the aroma, barely able to believe your good fortune in being there. And then, to top everything, you hear the sound of trumpets and horns. You look up and there, on the balcony of the Golden Roof, a group of musicians are playing a Christmas carol. 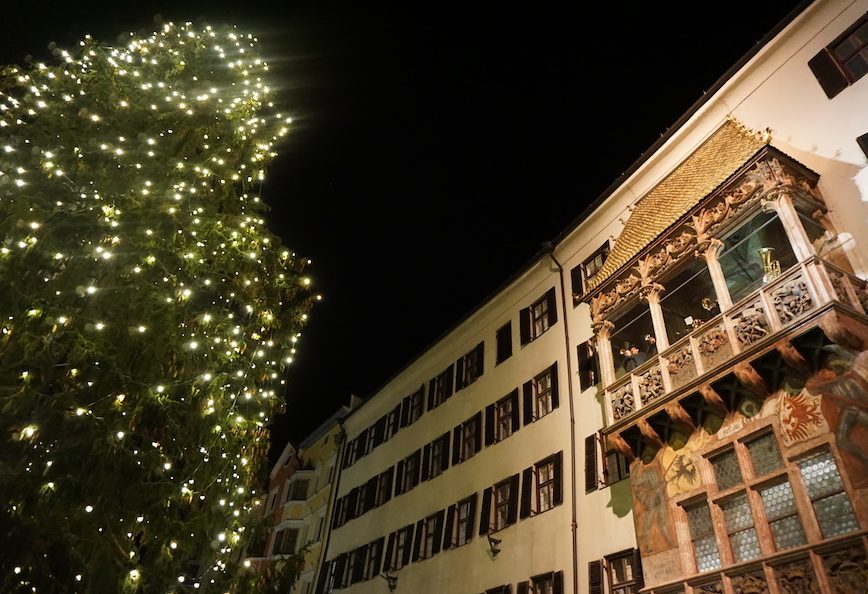 Of all the Christmas markets in Europe, Innsbruck was the one I most longed to experience. A medieval town with colourful buildings nestling at the bottom of the mountains always seemed so romantic. Snow-covered mountains surround the city here, so close that you can literally whizz to the top in a cable car in less than half an hour. It’s also small enough to walk around on foot which makes it very manageable, particularly when you’ve got children.

As you walk down into the Aldstadt (the Old Town) you’ll see the brightly coloured buildings lining the streets. The houses are even prettier on the other side of the river where the pastel-painted houses look like doll’s houses in front of the massive mountains.

For the best views of Innsbruck, climb the 133 steps to the top of the Stadturm, the onion-domed tower built in 1450. From the viewing platform at the top you can see the pistachio-green towers and domes of the medieval town centre, the dark green forests and those majestic mountains. 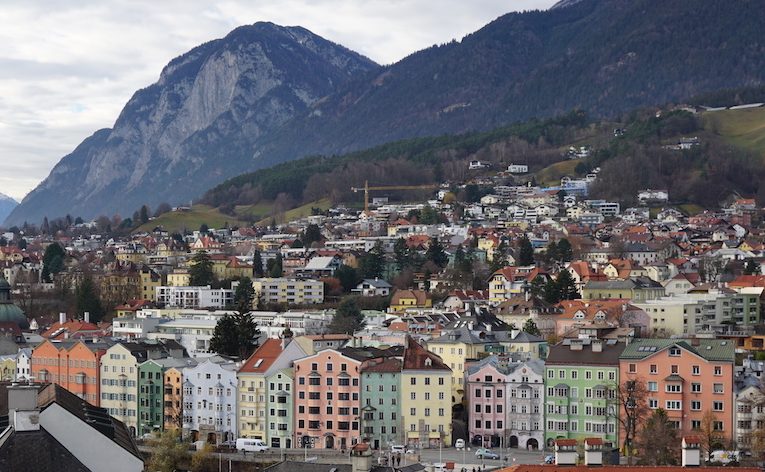 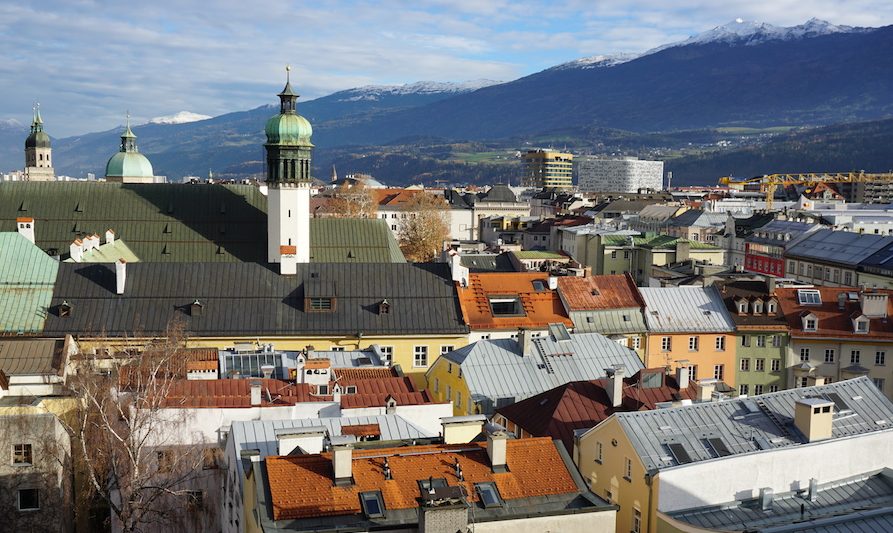 From here you’ll have a bird’s eye view of the Christmas markets spread out over the city. There are six markets in Innsbruck. The oldest – and our favourite – is the one beneath the Golden Roof. This is one of the most famous sights of the city. It was built in 1500 for Emperor Maximilian I’s wedding and its 2,657 fire-gilt copper tiles shimmer in the sunlight.

The wooden huts here sell traditional Tyrolean hats and gloves and beautiful Christmas ornaments made from cinnamon sticks, dried oranges and cloves – you can smell them even before you see them. Stop off at one of the stalls for a mug of glühwein. Children or non-drinkers will love the cinnamon-spiced hot apple drink. 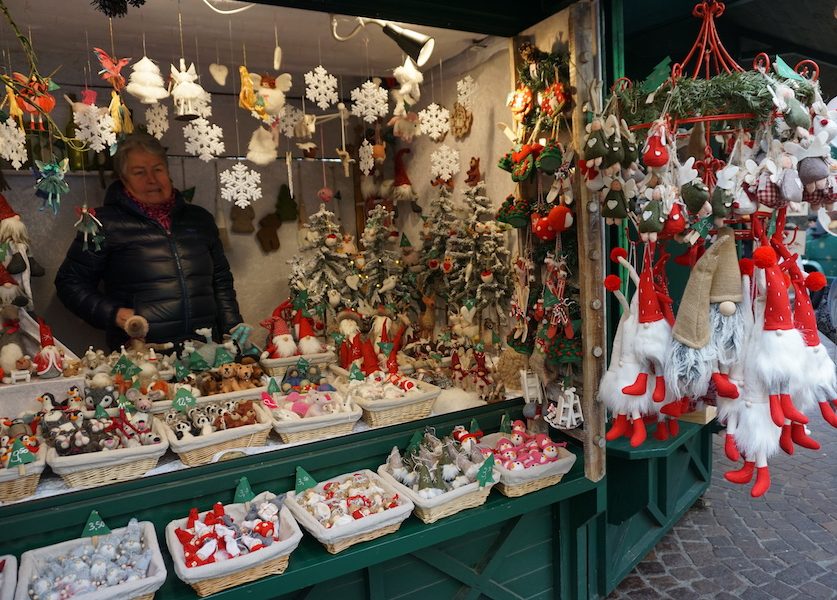 Look up and you’ll find large fairytale characters hanging from the walls of the buildings above you: Pinocchio, Little Red Riding Hood and The Goose Girl. There’s a tiny theatre here where fairytales are performed for children every afternoon. Your kids will also enjoy Riesengasse, the aptly-named Giants’ Alley where giant figures from fairytales stand guard along the passage and above the arches.

Walk over to the river and you’ll get to Marktplatz. The Christmas market here is towered over by the 14-metre tall Swarovski tree, covered in over 90,000 crystals. This is a great market for children as there are tiny ponies to pet, a vintage merry-go-round and a couple of old-fashioned fairground stalls where you can win a soft toy by hooking a duck on the end of a fishing line. You can buy beautiful Christmas ornaments here too along with sheepskin slippers and heart-shaped gingerbread biscuits.

As it starts to get dark, a spell of enchantment is cast over the city. Fairy lights and crystals sparkle on the Christmas trees. Christmas lights appear above the streets and the trees lining Maria-Theresien Strasse look as if they’re dripping with diamonds. The streets fill with people wrapped up warm against the cold, chatting together in groups as they try all the festive treats on offer in the food stalls.

Now is the time for feasting. Who wants to go to a restaurant when it’s far more fun and atmospheric to eat at the market? You can wander from stall to stall, sampling different foods from each. We were excited to try traditional Tyrolean food like Tiroler Gröstl (a bacon, onion and potato fry up), Kiachl (fried dough pastry topped with Sauerkraut) and the delicious potato spirals on a stick.

There are plenty of sweet treats too, from Krapfen (doughnuts filled with vanilla or chocolate), Kiachl topped with fresh cranberry jam and crêpes dusted with cinnamon and sugar.

When you’ve wandered around the various markets of the Old Town, it’s time to head up the mountain. A funicular railway goes all the way from the centre of Innsbruck to Hungerburg where you’ll find Innsbruck’s highest Christmas market, 300 metres above the city. There are marvellous panoramic views over Innsbruck and the surrounding mountains. 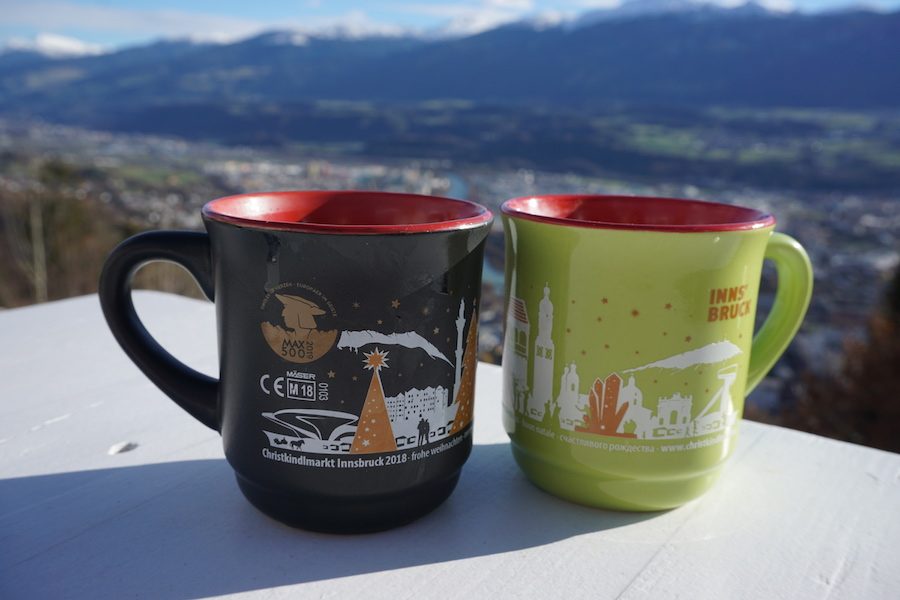 From here, it’s a short walk across the village square to the cable car station which will take you up the Nordkette Mountain in just 20 minutes, past forests of Christmas trees covered in pine cones. Step off at the top and you’ll find yourself in a winter wonderland of snow and ice – and biting cold air.

It’s a thrill to be at the top, surrounded by mountains and looking down on Innsbruck in the valley below. The Hafelekar cable car station is 2,256 metres above sea level so there are incredible views. Walking around is a challenge here if you’re not dressed for the snow. The slope up to the top was like an ice rink. Our kids were so thrilled to be in the snow that they went a bit mad, whooping and hollering and sliding down drifts of snow. They both lost at least one shoe in their excitement.

The best place to warm up after some fun in the snow is at Karstube, the little restaurant above the cable car station, where you can admire the amazing views from the picture windows without getting cold. Here you can eat steaming hot bowls of goulash or Tyrolean specialities like potato soup with bacon and onion or Kaspressknödel (flat bread dumplings filled with mountain cheese and served in a bowl of beef broth).

We decided to visit the Alpine Zoo on our way back down the mountain – it’s the first stop on the funicular railway. It’s Europe’s highest zoo and there are over 2,000 examples of Alpine wildlife. We saw otters and beavers curled up like bundles of fluff, massive bearded vultures and golden eagles, moose, Alpine cows and pigs nursing their young and brown bears that looked like giant teddy bears.

It was already dark by the time we got back to the city centre. The magical Christmas lights were already on. We could smell the chestnuts roasting as we walked through the streets and could hear the trumpets playing in the square. It was time for another evening inside this Alpine fairytale.

The Innsbruck Christmas markets are open daily from 11am until 9pm from November 15th until January 6th. Several of the markets finish on December 23rd.

It can get cold at a Christmas market so wrap up warm. You can always pop into cafés to warm up with tea and delicious cakes – this is Austria after all! We loved the cakes in the 200-year-old Café Munding.

I was concerned that the Innsbruck Christmas market would be really crowded. I needn’t have worried. There are lots of people there but we never felt hemmed in by crowds in any of the streets or markets in the way that we’ve experienced at Christmas markets in the UK, like in Bath and Winchester where thousands of people are crammed into a very small space. There is more room to spread out here in Innsbruck so it’s a much more pleasant experience.

There are more people than usual in Innsbruck during the Christmas period so it’s well worth booking a table in advance if you want to eat at specific restaurants.

What to eat and drink 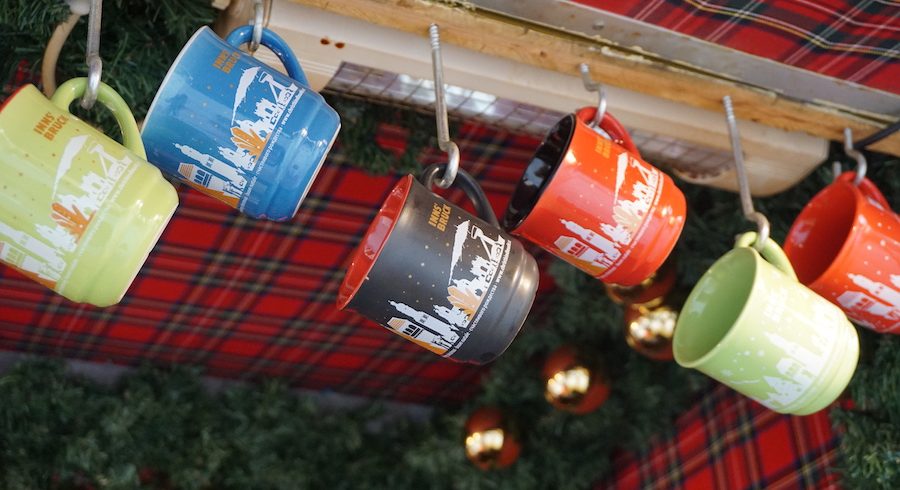 The glühwein (mulled wine) is a must and tastes as delicious as it smells. A mug costs €3.20. You will also need to pay a €3 deposit for one of the mugs which come in a range of colours. We appreciated how environmentally friendly it was to re-use our mugs with the option of keeping them as a souvenir or returning them at any one of the glühwein stalls for a refund.

Our favourite Tyrolean speciality at the Innsbruck Christmas market was the Kiachls with cranberry jam – they made an ideal breakfast treat.

You can bring the smells of Innsbruck home with you. We bought beautiful star-shaped tree ornaments made from cinnamon sticks and other spices – the scent should last for at least a year Painted nutcracker dolls are also a good buy as well as traditional wooden toys.

Classic Things to Do in Salzburg, Austria

All the Winter Sports You Have to Do in Austria