On the coast of Koloa, this rare old Hawaiian village is being restored as an authentic learning space for all.

It’s the only one of its kind. Across the street from Poipu Beach, the most popular beach on the south shore of Kauai, remnants of its ancient life emerge at the 13-acre Ke Kahua O Kaneiolouma (The Kaneiolouma Complex).

Dating back to the mid-1400s, Kaneiolouma is one of the only remaining historic Hawaiian villages on the south shore and includes house sites, taro patches, fishponds, heiau (temples), shrines—and, in the middle of it all, possibly the only intact makahiki sporting arena in the state.

Beginning when the star cluster of Pleiades rises over the horizon at sunset, the makahiki was an ancient Hawaiian festival that began at the end of October and lasted until February. A festival to honor Lono, the god of agriculture, it was a time when war was prohibited. There were religious rituals full of protocols, feasting, and games—hakoko (wrestling), mokomoko (boxing), oo ihe (spear throwing), kuikui (fistfighting), to name a few. 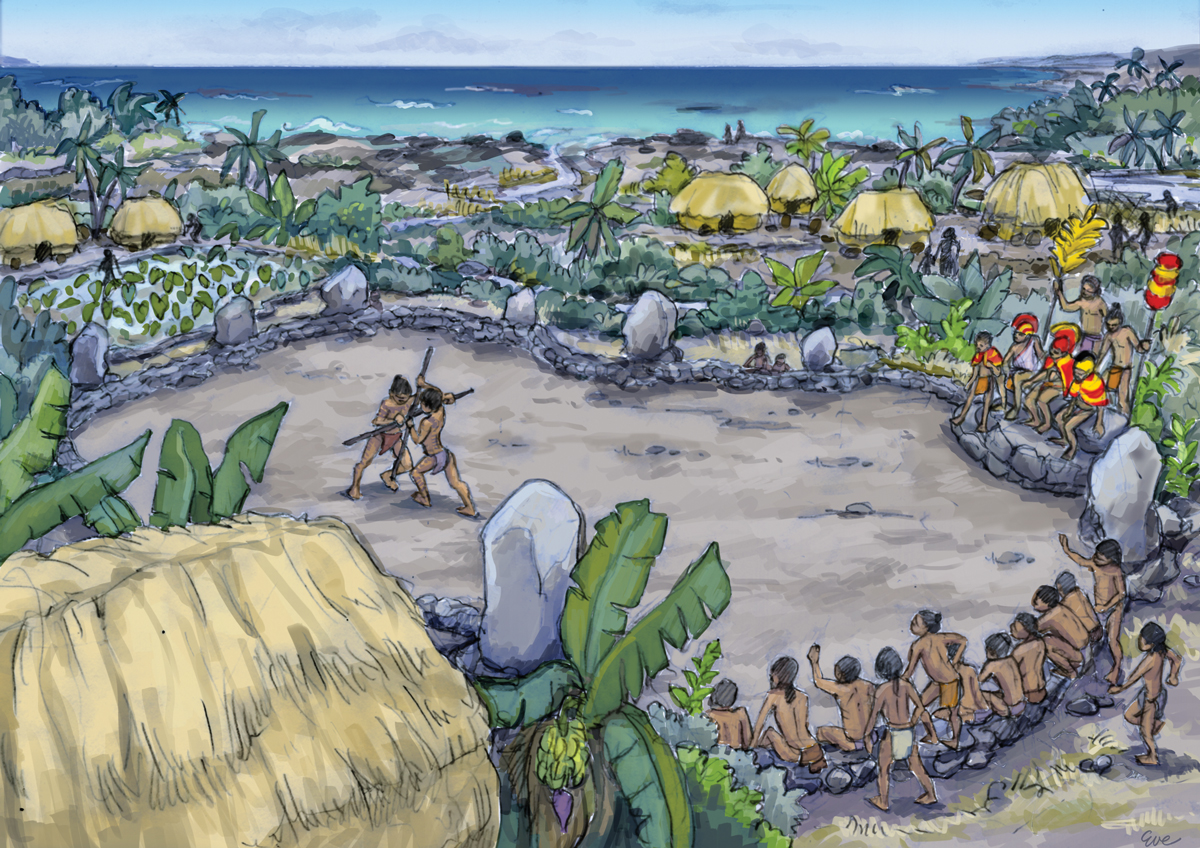 An illustration depicting what Kaneiolouma may have looked like in the 15th century during the makahiki festival. The upright stones represent the kii that surrounded the arena.
Illustration: Eve Furchgott

Seeing the arena—large, oval-shaped, smooth flat ground, delineated by rock walls—it’s easy to imagine how it could have been used for spectator sports. When Kaneiolouma was first surveyed in 1959, Native Hawaiian archaeological expert Henry Kekahuna was able to distinguish an alii (chief) seating area on the higher ground toward the center of the arena, and a general seating area on the far end. He also found 23 kii (idol) sites that were once inside the village. Eighteen of that kii surrounded the edges of the arena, denoting the sacred nature of the space.

“It’s special that it exists in modern times,” says Rupert Rowe, president of Hui Malama O Kaneiolouma, a nonprofit organization founded in 2003 to preserve Kaneiolouma and educate the public. Rowe and Hui’s vice president, Billy Kaohelelaulii, have worked purposefully to bring the land back to the present since 1998 when it was overgrown and forgotten. “Nobody came in here. … It was impossible to know what was back here. A tremendous amount of cactus surrounded this whole place and kept the public out.” 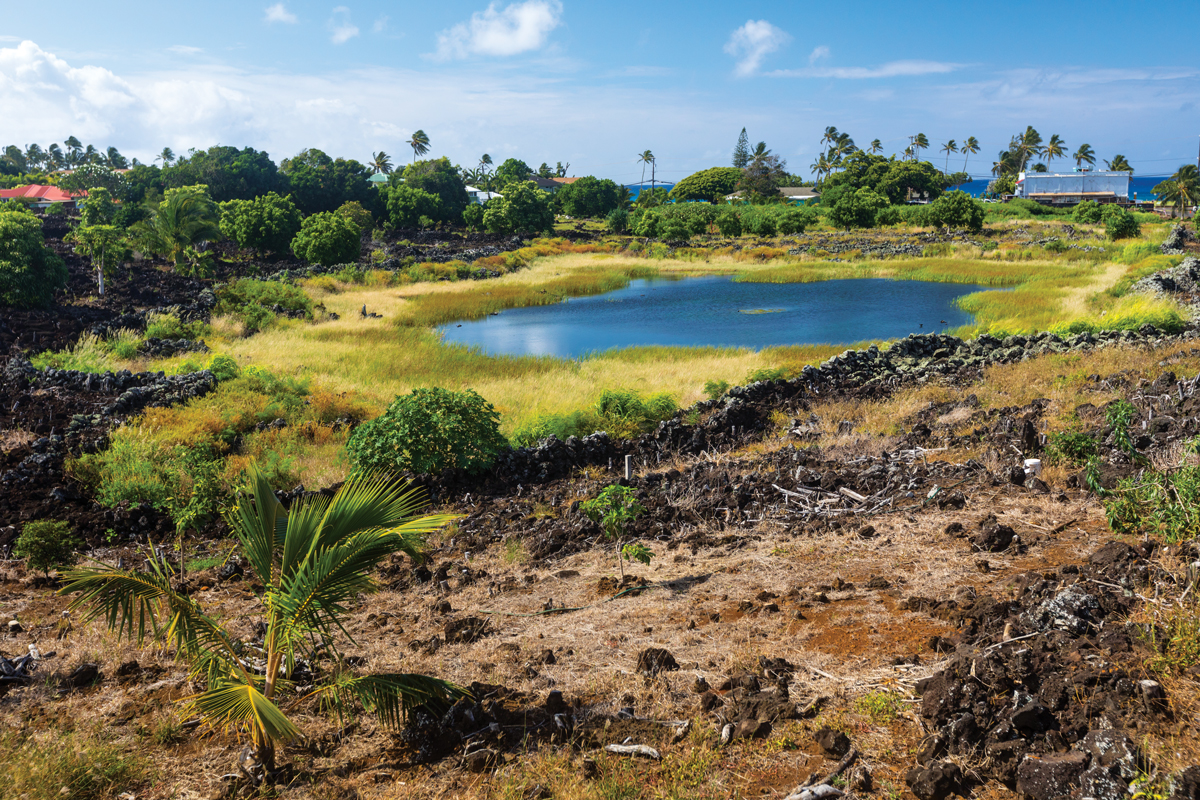 Kaneiolouma, as viewed from Poipu Road, shows the makahiki arena filled with water and the spectator seating in the immediate foreground.
Photo: Lace Andersen

It’s no longer possible to drive by without noticing the historic village—four, 16-foot-tall kii call attention to it. On a platform named Ke Apapalani O Manokalanipo, the kii were installed by the Hui to commemorate Kauai’s ancestors who studied the movement of the stars. Facing east, west, north, and south, the kii create a celestial map, marking the path of the winter and summer solstices.

Hui Malama O Kaneiolouma’s mission doesn’t stop there though. Much of its vision has been organized around Kekahuna’s lengthy list of suggestions for the complex back in 1959, which includes making Kaneiolouma a living and functioning Hawaiian village.

“The island of Kauai should receive the honor of being the very first to produce the only true Hawaiian village of ancient character in the world,” Kekahuna wrote as part of his report. “Not only should it be a village of real Hawaiian houses and surroundings, but especially of genuinely native life, with genuine Native Hawaiians preserving and perpetuating the now largely lost fascinating arts and crafts of their ancestors.” 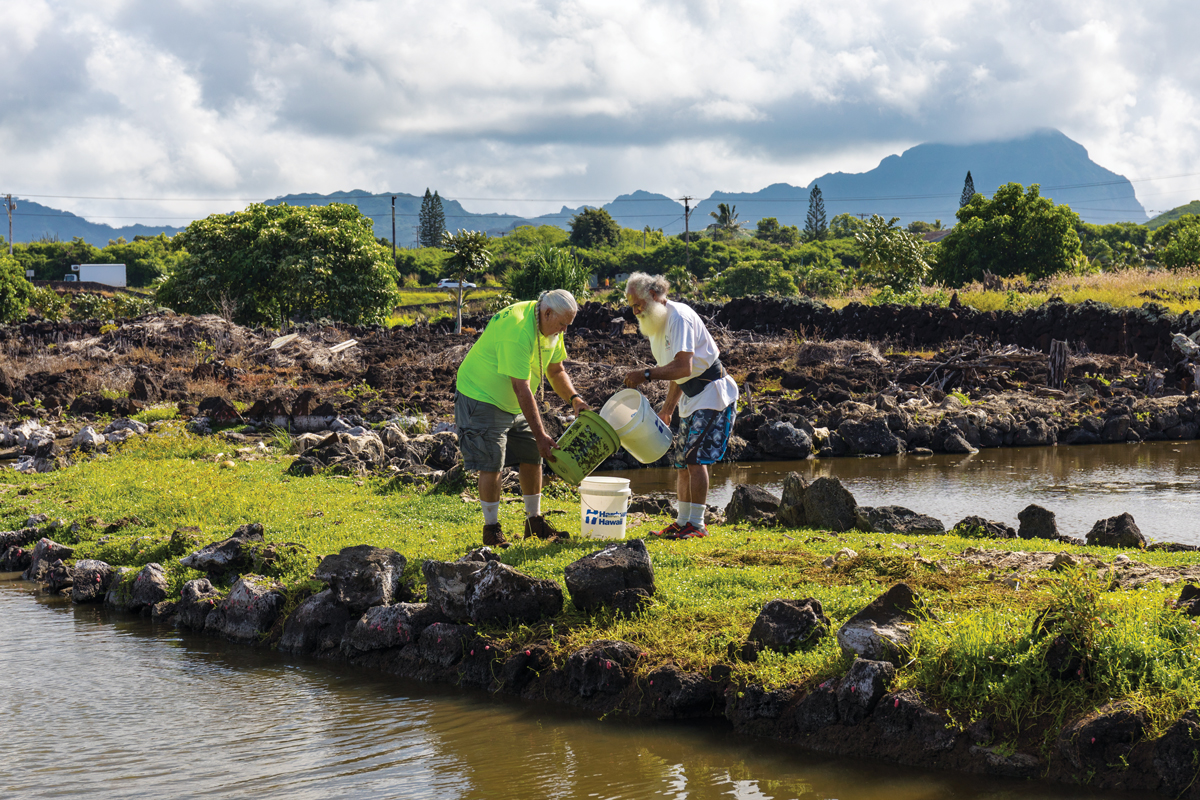 Consistent with Kekahuna’s dreams, plans for Kaneiolouma call for two caretakers (cultural practitioners) to live on the land, take care of it and act as guides, and for the area to become a venue for the perpetuation of Native Hawaiian life and culture, with the teaching and sharing of art, music, farming, and language. It could also be used for traditional ceremonies and competitions—yes, it’s possible that the makahiki games may once again return to the arena.

“As a kupuna (elder), he (Kekahuna) seen our future back in 1959. I believe he set the tone of our journey because without him and the understanding of his mission, I would never do what I did,” says Rowe.

“When the time comes for you to take your journey—I’m talking as a kupuna now—you must look back in your past and look at the legacy that you leave for all. It gives me great honor to give to the future.”

The Best Authentic Luaus To Experience In Hawaii

A History Of The Waipio Valley On Hawaii’s Big Island

1 thought on “In Poipu, Kauai, a Historic Hawaiian village is Coming Back to Life”