Jack Ryan (yep, like the TV show) makes his living by pedalling visitors around Sydney. When asked what he loves about his home town, his answer is simple. “What’s not to love about Sydney? Great food, friendly people, so many activities to do and amazing weather.”

There is one thing cyclist Jack Ryan doesn’t love, though: traffic. Sydney is an enormous city, and car-choked roads make for marathon journeys. And the less said about public transport, the better.

“Going on a bike gives you the freedom to go anywhere, including places cars aren’t able to reach,” Ryan says. “And Sydney is quite a large city, so it’s very hard to see everything on foot. I truly believe that a bike tour is the best introduction to a city.” 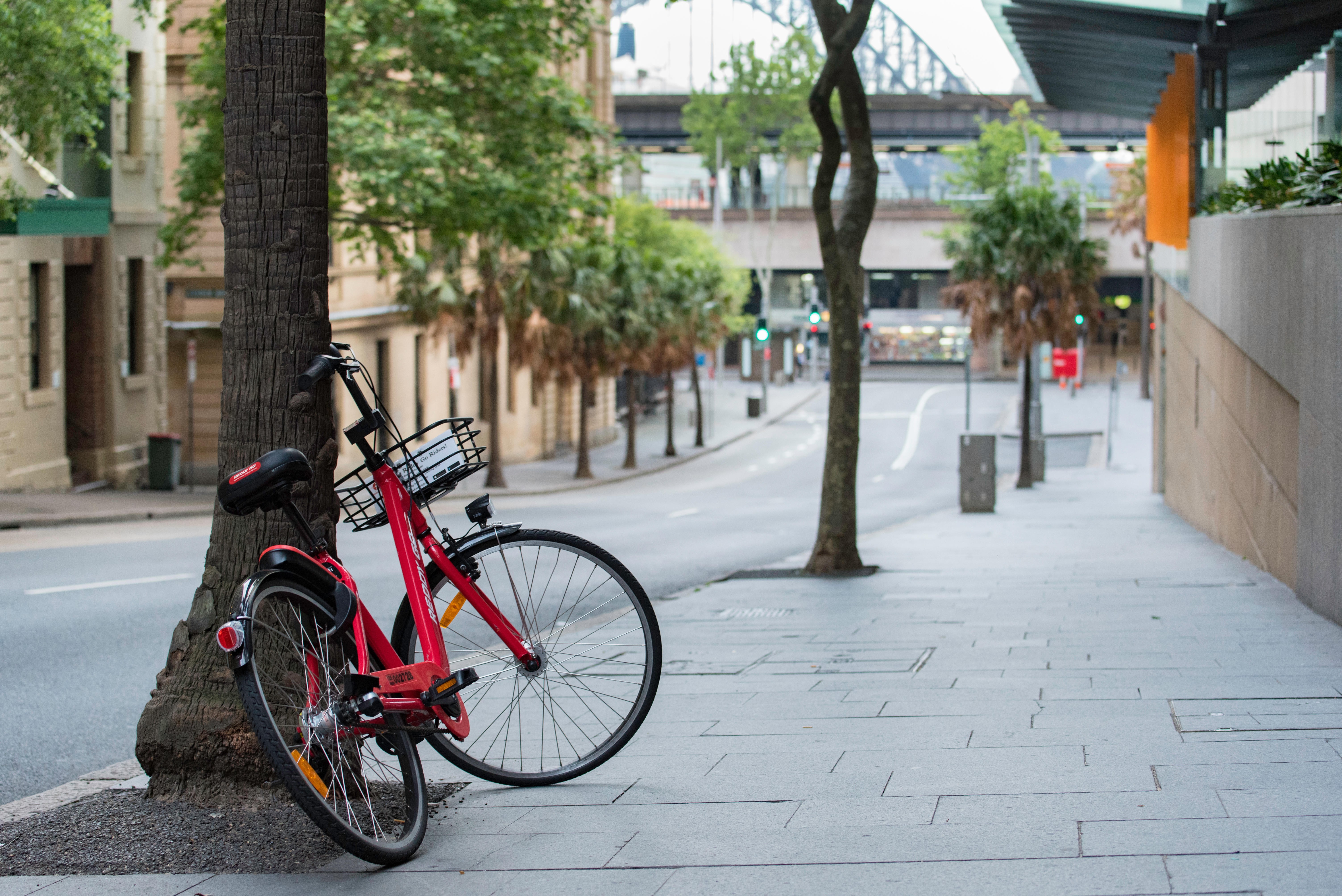 The best way to see the sprawling city of Sydney is by bike, and there are plenty of hire options available | © Stephen Dwyer / Alamy Stock Photo

Sydney’s vast distances mean that the best way to see the city on a week-long itinerary is to break it up into neighbourhood-sized chunks, spending one day at a time in a different corner of town rather than slogging between them. From the sandy Northern Beaches to the eclectic Inner-West, CBD skyscrapers to sun-bathed Bondi, this is how to make the most of seven days in Sydney, Australia.

A stay in Sydney cannot start anywhere other than the sparkling waterway at its heart. The sun glistens on Sydney Harbour by day, beating down on the city’s two most iconic landmarks: the Sydney Harbour Bridge and the Sydney Opera House. Visitors can cycle along one side of the bridge, stroll down the other, or walk around the perimeter of the harbour beneath the sails of the Opera House, then onwards into the immaculately curated Royal Botanic Garden. But the perspective from a BridgeClimb cannot be beaten.

“This is voted as one of the top activities to do in the world,” Ryan explains. “You will join a group and scale the height of the bridge on one of their various tours. The view from the top and the whole experience is something you can’t get anywhere else.”

By night, retreat to the Rocks – once a convict-era slum now crowded with cobbled alleyways and historic sandstone pubs.

“The Lord Nelson Hotel, Endeavour Tap Rooms, The Squire’s Landing – these three pubs do all their own brewing on site,” Ryan says. “These are some of the most popular drinking spots with the most famous drinks in Australia. The Lord Nelson Hotel is also the oldest hotel in Sydney, so it has the historical aspect, too.”

Commuters pour into Sydney’s central business district just south of the harbour every morning, and there’s an abundance of quality cafés to fuel them with caffeine: Skittle Lane, Normcore and Hills Bros. to name three. Grab a flat white before tackling the city-centre attractions listed in every Sydney guidebook – the Art Gallery of New South Wales, the Powerhouse Museum, the Australian Museum, Hyde Park Barracks, St Mary’s Cathedral, Hyde Park and the Sydney Tower soaring over the skyline.

By night, head to Circular Quay for high-end dining – Aria, Quay, and Bennelong in the bowels of the Opera House plate up Sydney’s finest contemporary Australian cuisine. For more budget-friendly options, go south to Chinatown instead.

“Some of the best spots in Chinatown include Zilver and Emperor’s Puffs,” recommends Ryan, who’s also partial to a pastry from Harry’s Cafe de Wheels in Haymarket, Ultimo, Darling Harbour or Woolloomooloo. 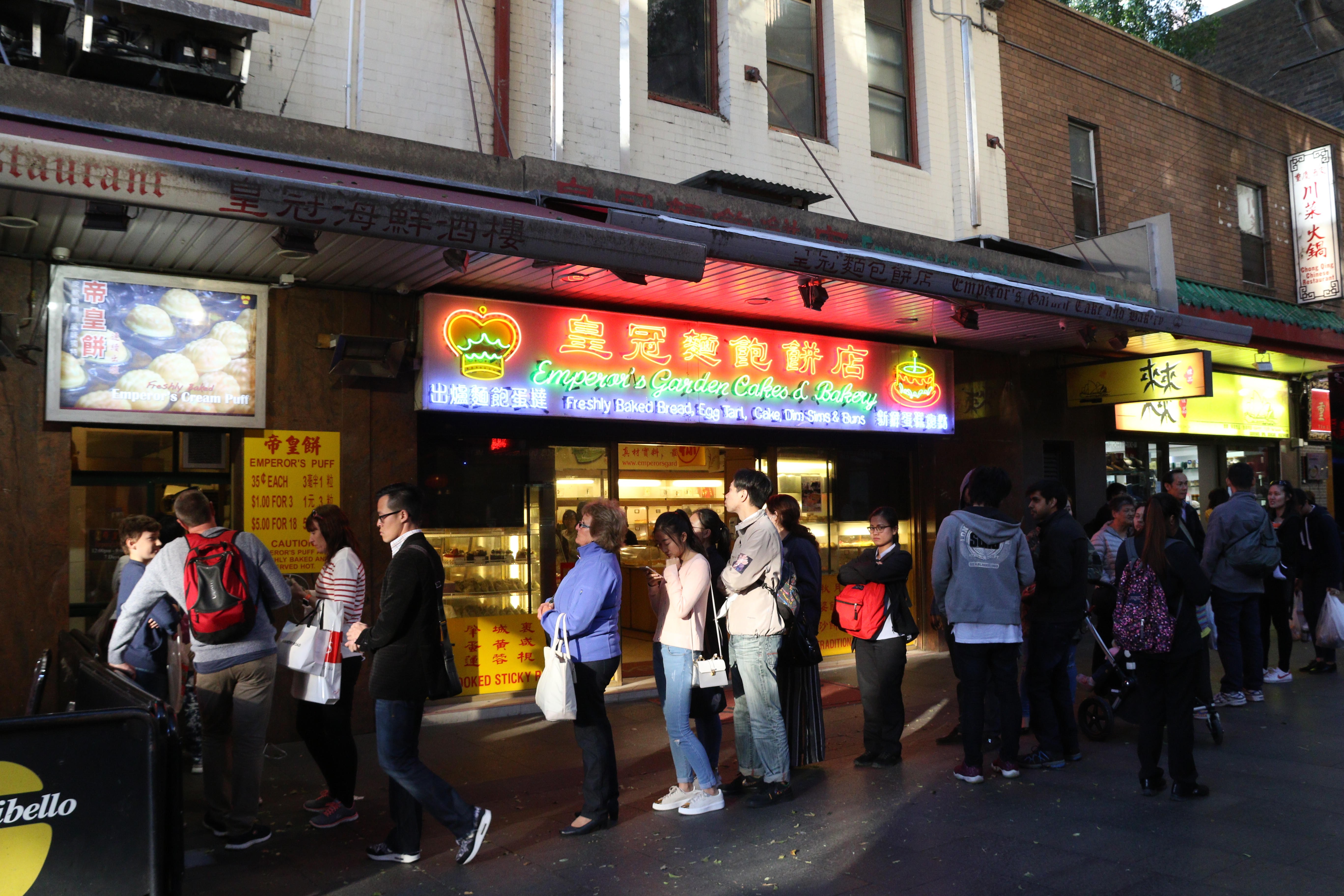 A queue outside Emperor’s Puffs in Chinatown, a budget-friendlier option for dining out in the city that loves to eat | © Richard Milnes / Alamy Stock Photo

The golden sand of Bondi Beach attracts travellers like a magnet. Plenty of international visitors grab the chance to learn to surf at one of the world’s most famous beaches, while other simply lap up the buzzing atmosphere at the beachside bars, cafés and eateries – none more famous than the Bondi Icebergs dining room above Sydney’s most Instagrammable ocean pool.

But the highlight is the clifftop walk from Bondi past Tamarama, Bronte, Clovelly and Gordons Bay, popping out at the other end in Coogee — another beautiful arc of sand shaded by the Coogee Bay Hotel and the Coogee Pavilion, two of the Eastern Suburbs’ most iconic watering holes.

“Bondi to Coogee lasts only a few hours and it’s extremely scenic, as it’s by the water’s edge the whole time,” Ryan says. “And Manly to Bondi is a new route only launched in 2020. While it is very scenic, it’s also very long and it’s not for everyone – it’s a whopping 80km (50mi).” 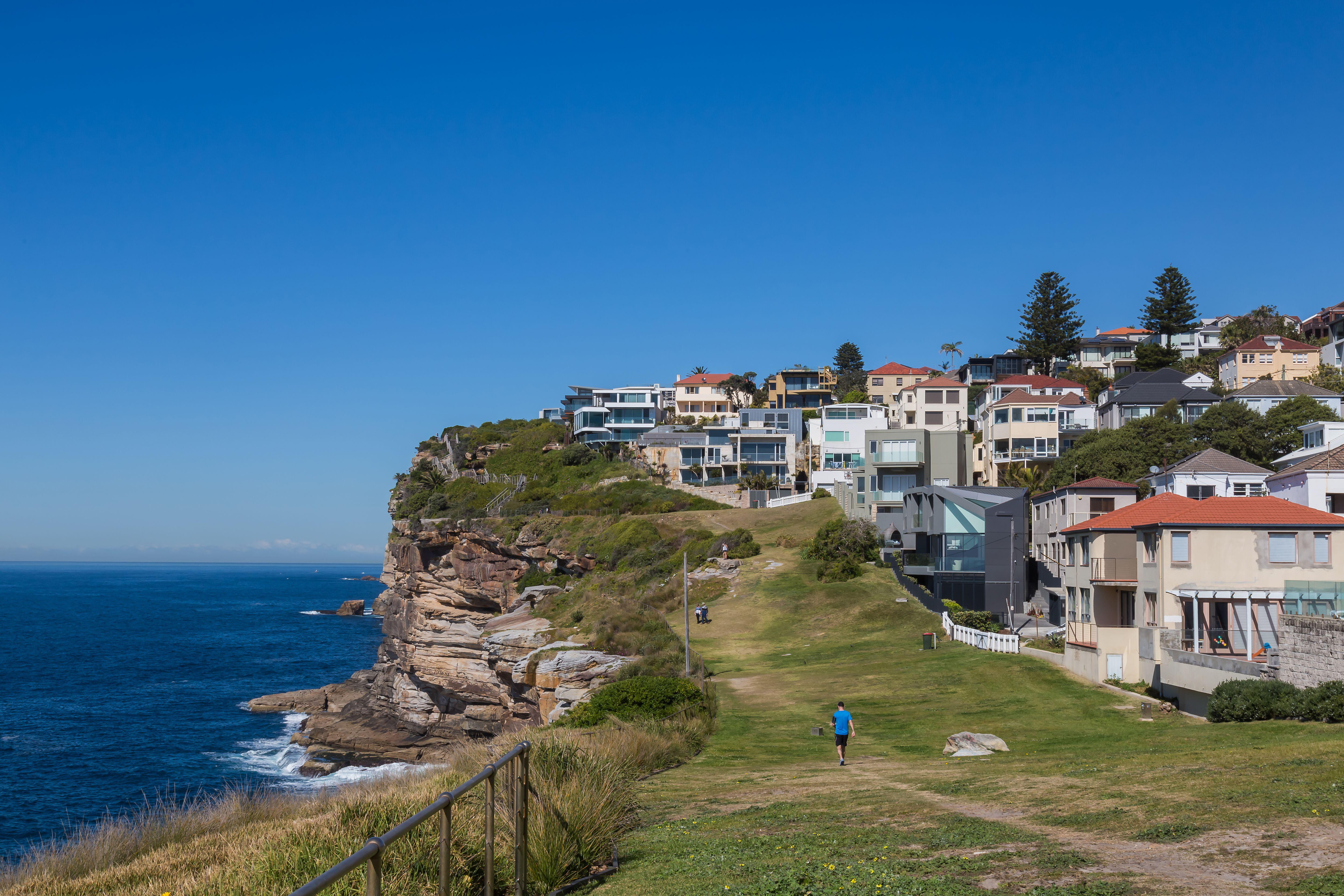 The Inner West is brimming with all the things that hipsters adore: specialty coffee, craft beer, vintage stores and street art. For coffee, try the Grounds of Alexandria, Annandale’s Cornersmith and Marrickville’s Coffee Alchemy. For boutique booze, there’s Young Henry’s in Newtown, The Grifter Brewing Co in Marrickville and Rosebery’s Archie Rose Distillery for spirits aficionados. Shopaholics should wander down Newtown’s King Street for vintage stores and vegan eateries, and check out weekly markets in Glebe (Saturday), Eveleigh’s Carriageworks (Saturday), and Marrickville (Sunday). 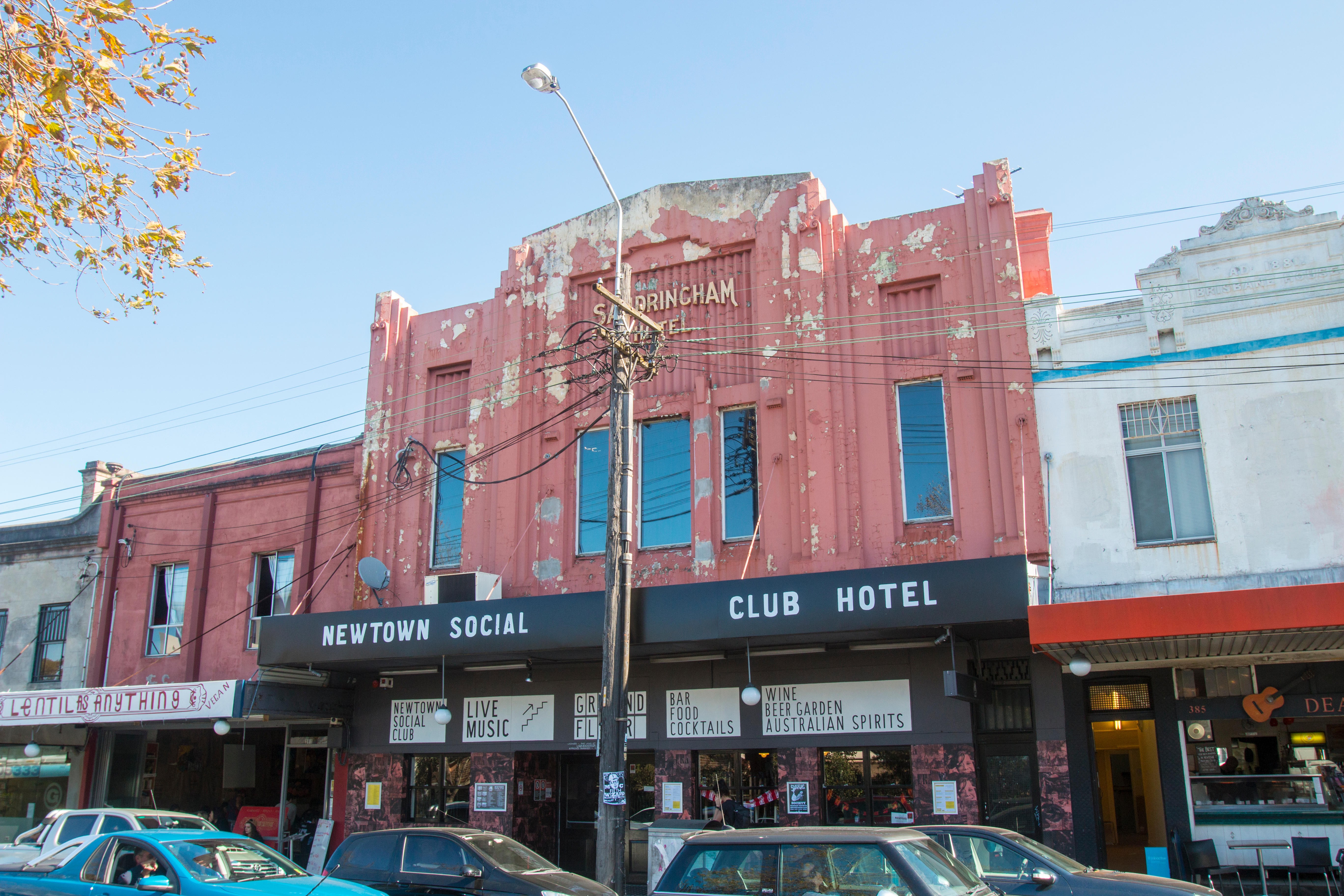 Newtown, an inner west suburb of Sydney is about all things bohemian – from speciality coffee and trendy restaurants to indie cinemas and vintage boutiques. | © sammy / Alamy Stock Photo

Fintan Magee, dubbed the Australian Bansky, blankets Newtown with his large-scale murals, while the White Rabbit gallery in Chippendale is Sydney’s premier contemporary art museum for its thought-provoking collection of modern Chinese works.

“It has over four floors of various artworks created since 2000,” Ryan explains. “And it also has a library and Chinese tea house, too.”

Every visitor to Sydney makes a beeline to Bondi, but Manly is Ryan’s favourite beach.

“While Bondi is alright, Manly has a much more local atmosphere and is far more enjoyable,” he says, who recommends sitting on the right of the ferry from Circular Quay to Manly Wharf for dazzling views of the harbour en route. “The beach itself is great and the surrounding restaurants, cafés and bars are phenomenal.”

That local, quintessentially Australian vibe is cemented in the walls of old-school beachside boozers like the Steyne and the Ivanhoe. But Ryan’s top tip is the North Head lookout on the cliffs above Manly. 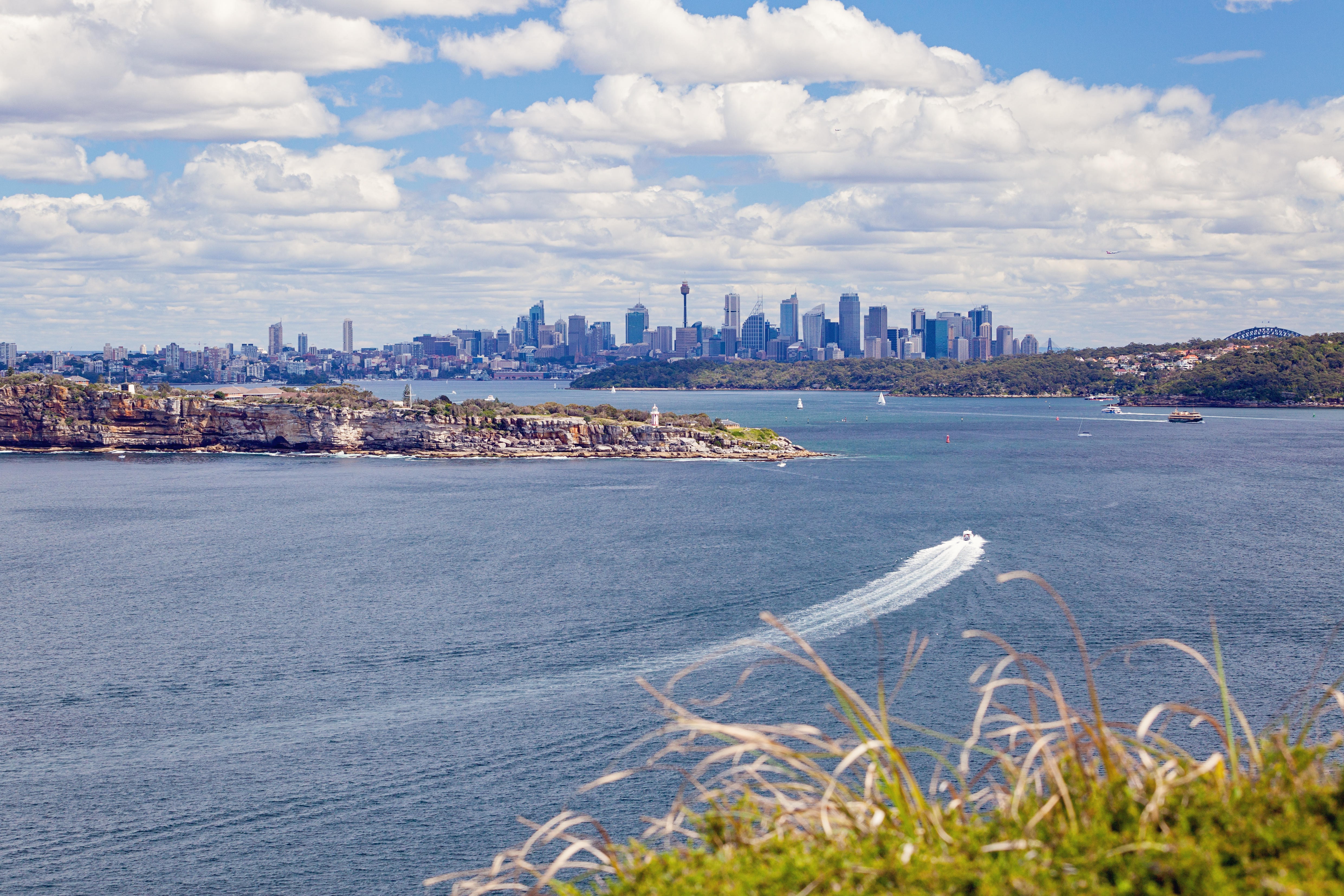 Hop on a ferry from Circular Quay to Manly to get a glimpse of the North Head view of Sydney skyline. | © Sally Crane / Alamy Stock Photo

“This is 100% the best view in Sydney,” he insists. “You should take either a car or a bike to get there as you would have to climb a steep hill. Simply search on Google for the lookout and you will see what I’m talking about.”

Australia’s most scenic zoo, Taronga, is another big-ticket Sydney attraction on the north side of the Harbour – just a 12-minute ferry from Circular Quay.

“This is a great spot to see some wildlife,” Ryan says. “Many people get disappointed that you can’t find koalas in the city. Going to the zoo is a great alternative.”

Surry Hills is Sydney’s culinary capital, and deserves a day spent eating, drinking, then eating some more. Once a working-class neighbourhood next door to Central station, this chic inner-city suburb now boasts Sydney’s most diverse collection of cafés, restaurants and bars covering every price point. 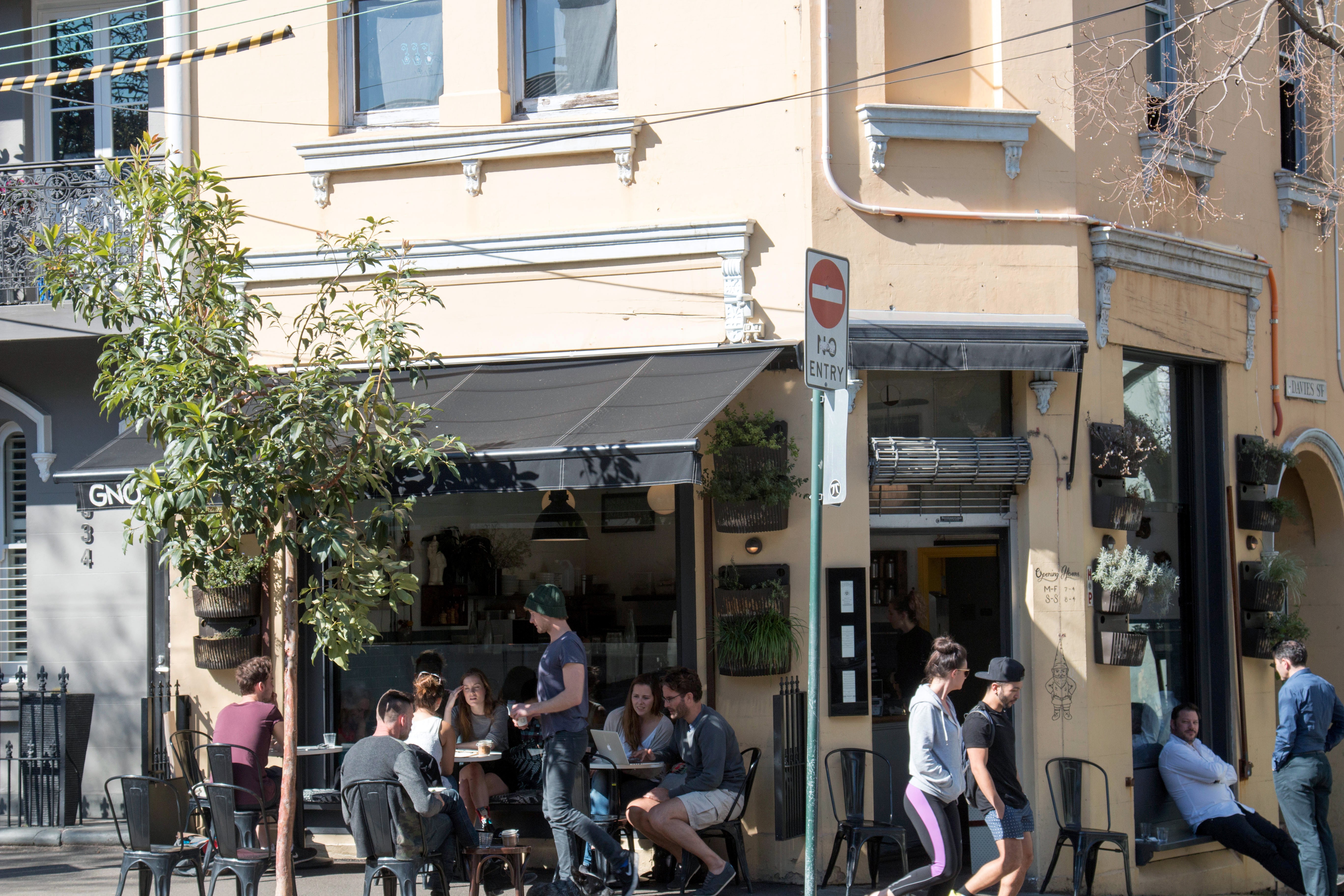 Sister cafés Paramount Coffee Project and Reuben Hills, plus institutions like Single O, Sample and Artificer, lead the Sydney specialty coffee scene. Chin Chin (Southeast Asian), Firedoor (barbecue), Nour (Middle Eastern), Sáng by Mabasa (Korean) and Yulli’s (vegetarian) push the envelope when it comes to food. And after dark, the long line of pubs on Cleveland and Foveaux Streets are joined by the likes of wine bar Poly, upscale Irish bar the Wild Rover, and the late-night Soda Factory.

“For Surry Hills, I would advise you go check out Venue 505, which is a rustic jazz bar,” Ryan adds. “It’s one of the best spots in Sydney.”

A stay in Sydney could easily be stretched to seven days and beyond, but a smorgasbord of compelling day trips sit right on the city’s doorstep. The UNESCO World Heritage-listed Blue Mountains two hours west of Sydney are a trove of serene walking trails and jaw-dropping lookouts. The sun-kissed beaches of the Central Coast, up-and-coming Newcastle and the vineyards of the Hunter Valley wine region form a trail north of town. And heading south, the unspoiled bushland and beaches of the Royal National Park – then Wollongong and the South Coast further along – lure travellers south of Sydney. Indeed, many Sydney locals flock to these places every weekend to put their feet up.

“It’s a city with so much hustle and bustle during the working week,” Ryan says. “And yet come the evening and weekend, the pace slows down and everyone relaxes.”

This is an updated version of a story created by Paris Donnatella Callan.

22 Natural Wonders in Australia That Will Take Your Breath Away