Elephants live in mile-long savannahs or tree-filled rainforests. People tend to ask, how do elephants communicate when they can live far apart from each other? Or, how are they able to warn each other of potential dangers?

The answer is that elephants have a variety of ways to communicate. These large mammals have developed both verbal and non-verbal communication skills. Their unique abilities help them survive potential dangers. Here are some Asian and African elephant facts about how they communicate.

Just like any animal, elephants can communicate using distinct sounds. These large mammals use distinct sounds to speak and warn each other. They can produce rumbles, snorts, barks, roars and cries. These creatures also produce low and high-frequency sounds.

Believe it or not, but African and Asian elephants can pick up vibrations using their feet. A researcher from Stanford University discovered that elephants can feel the low rumble or foot stomps with their feet.

How is this possible, you ask? Well, elephants have sensitive nerve endings on their feet that allow them to pick up frequencies from other herds or members. The sound of other rumbles or stomps is picked up from their toenails and then makes its way into their ear.

Being able to detect sounds through the ground is important for this species. It allows elephants to communicate with other elephants. When elephants are far distances they can send signals when danger approaches, where water or food is near. It’s also believed that elephants can hear storms.

Not only do elephants communicate with sound and feet, but also through movements. Researchers like, Petter Granli and Joyce Poole, found that these giant mammals can interact through gestures. In other words, they have sign language.

To ordinary people, an elephant folding its ears or taking a step back can mean nothing. But, it means something to one another and other species.

Just like humans, elephants use non-verbal communication. According to National Geographic, they intimidate and show aggression by spreading their ears, standing tall and lifting their tusks. When these large mammals are playful, they can climb on and start to bob their heads. 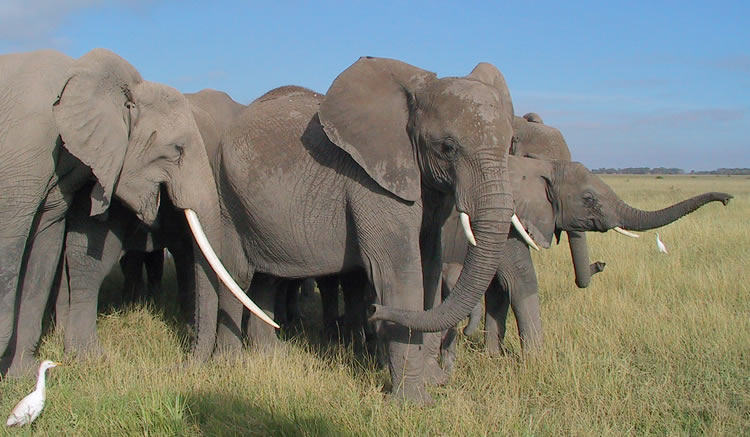