In one picture, Red Ar.my soldiers stand guard outside a burning building in the east of Berlin with machine guns at the ready. Seven decades later, another shows a man cycling past the same scene, seemingly without a care in the world.

These astonishing photographs compare Berlin in 1945 – when the city was falling to the Soviets as they marched on Adolf Hitler’s last line of defense – to the peaceful German capital now.

The incredible pictures from the end of the Second World W.a.r – in Europe, at least – were taken by Red Ar.my photographer Georgiy Samsonov.

The images were unearthed by Fabrizio Bensch, who used black and white film to capture the exact same locations today – and the comparisons are extraordinary.

Soviet soldiers are seen celebrating outside the Reichstag in central Berlin just days after Adolf Hitler’s suicide in 1945. The historic building bears the scars of the w.a.r, which saw it bombed on numerous occasions. The contrasting scene today shows people cycling past where artillery once stood, presumably on their way to work.

Other pictures show shaken German parents and children daring to leave their homes shortly after the end of the Battle of Berlin. The calm scene today shows Mercedes and BMWs parked up alongside the now upmarket street.

Another moving image shows Red Ar.my troops pointing to a sign outside the New Reich Chancellery, the offices of Adolf Hitler. It took five years for the rubble of the Nazi stronghold to be cleared, but in its place now stand offices, social houses and – where the men posed for the photograph – a pre-school. 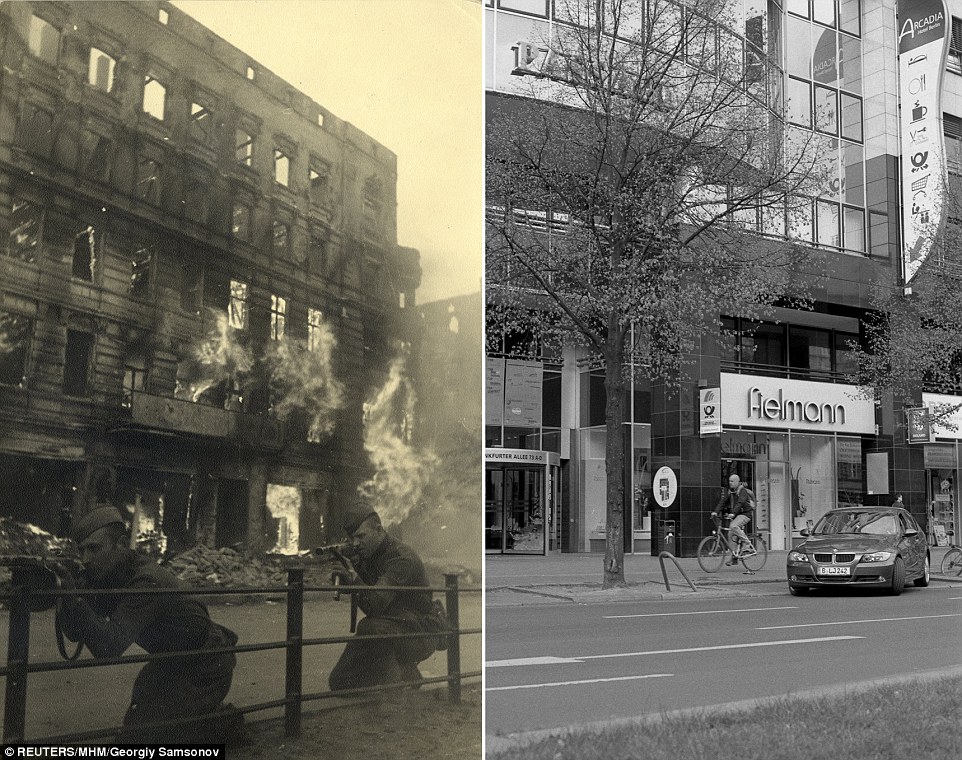 Soviet soldiers take position in front of a burning building (left) in Frankfurter Allee in Berlin in 1945. Today, an opticians (right) stands in its place 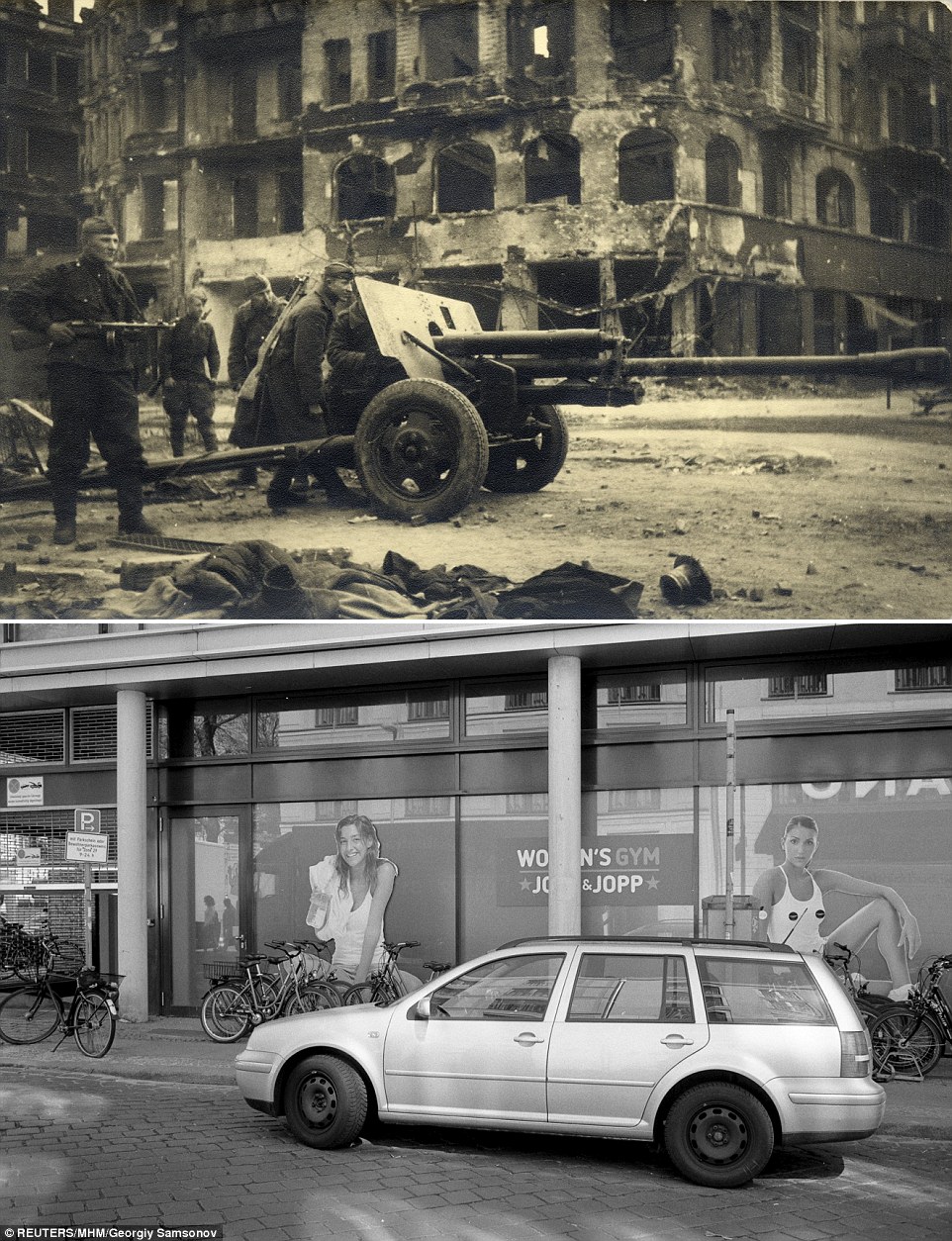 Red Ar.my soldiers man artillery (above) as they storm through a devastated Berlin in May 1945, just days after Hitler’s death. 70 years later and a gym (below) has replaced the rubble 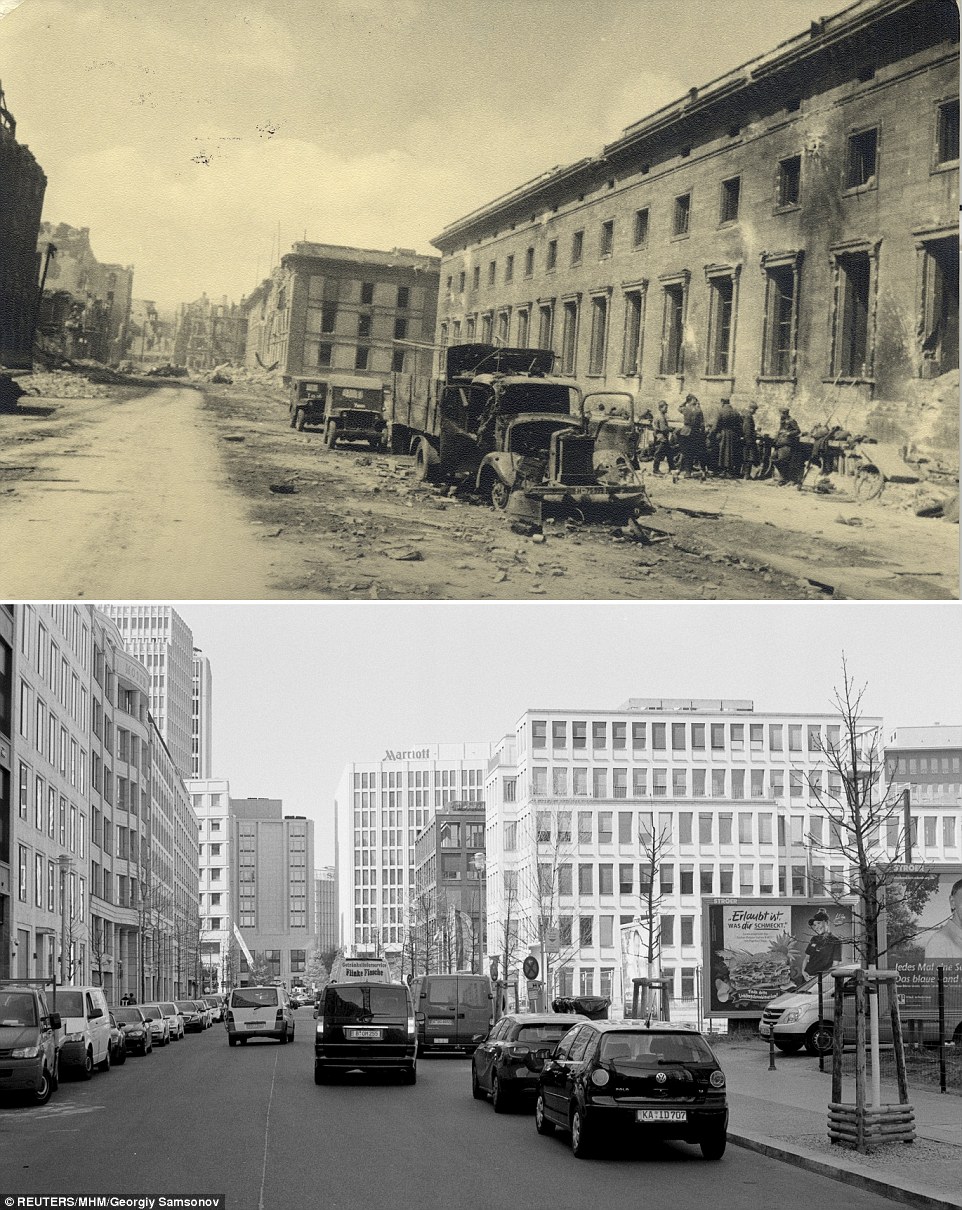 The crumbling remains of the New Reich Chancellery – the offices of Adolf Hitler – are seen in 1945 (above). The building was almost completely destroyed in the Battle of Berlin, and was eventually cleared and knocked down. The street is now lined with offices and a hotel (below) 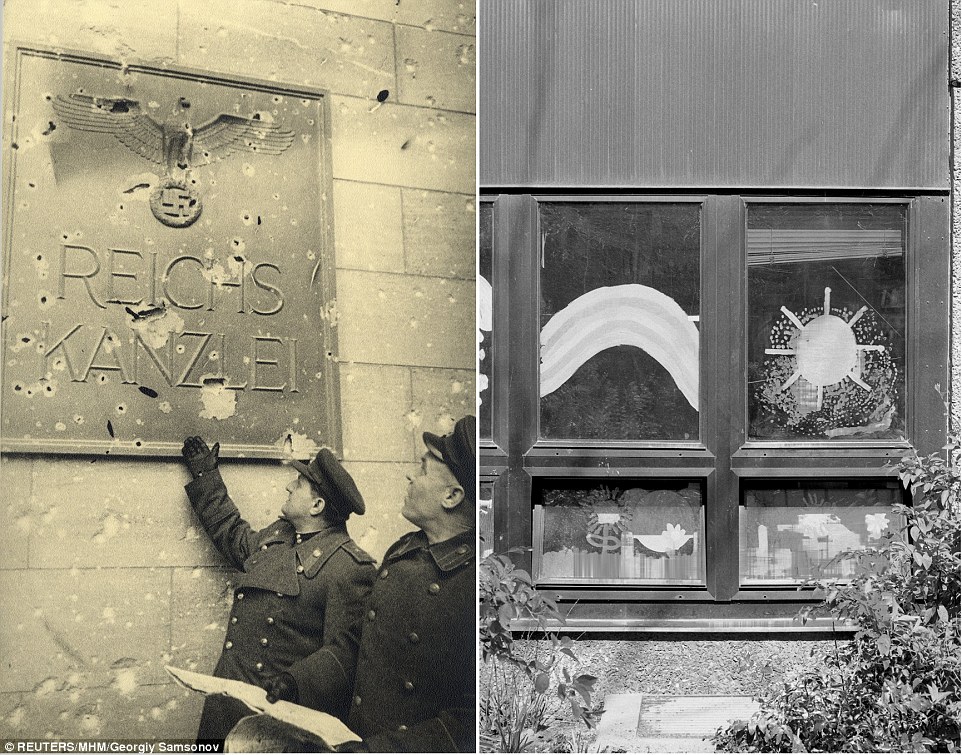 A Red Ar.my officer points to the sign outside Hitler’s main office (left). Standing in the sign’s place today is a pre-school (right), with paintings by children seen in the window 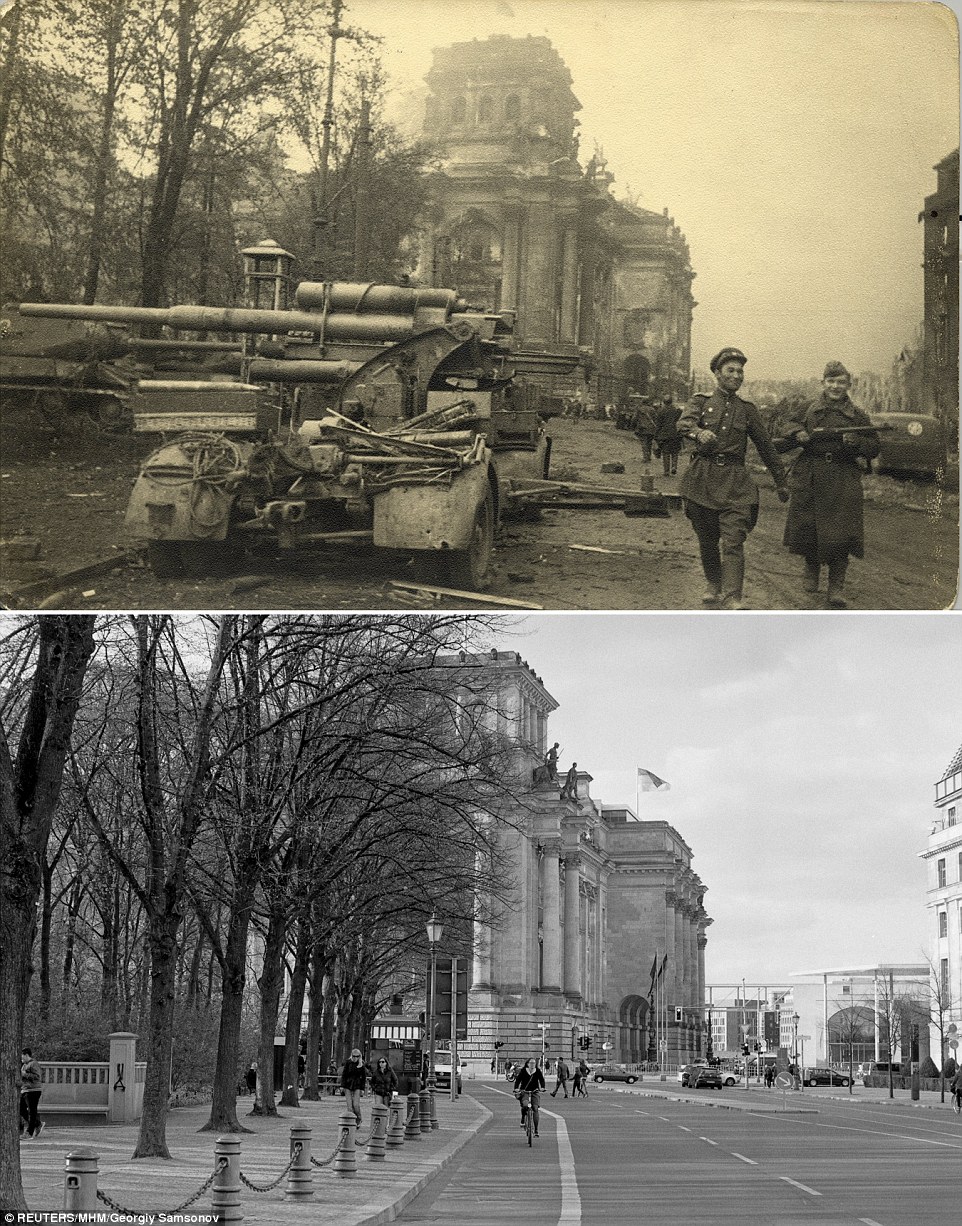 Soviet soldiers smile for the camera (above) as they march past the Reichstag in Berlin after the Germans surrendered. The building (below) still remains some 70 years later and is visited by millions every year 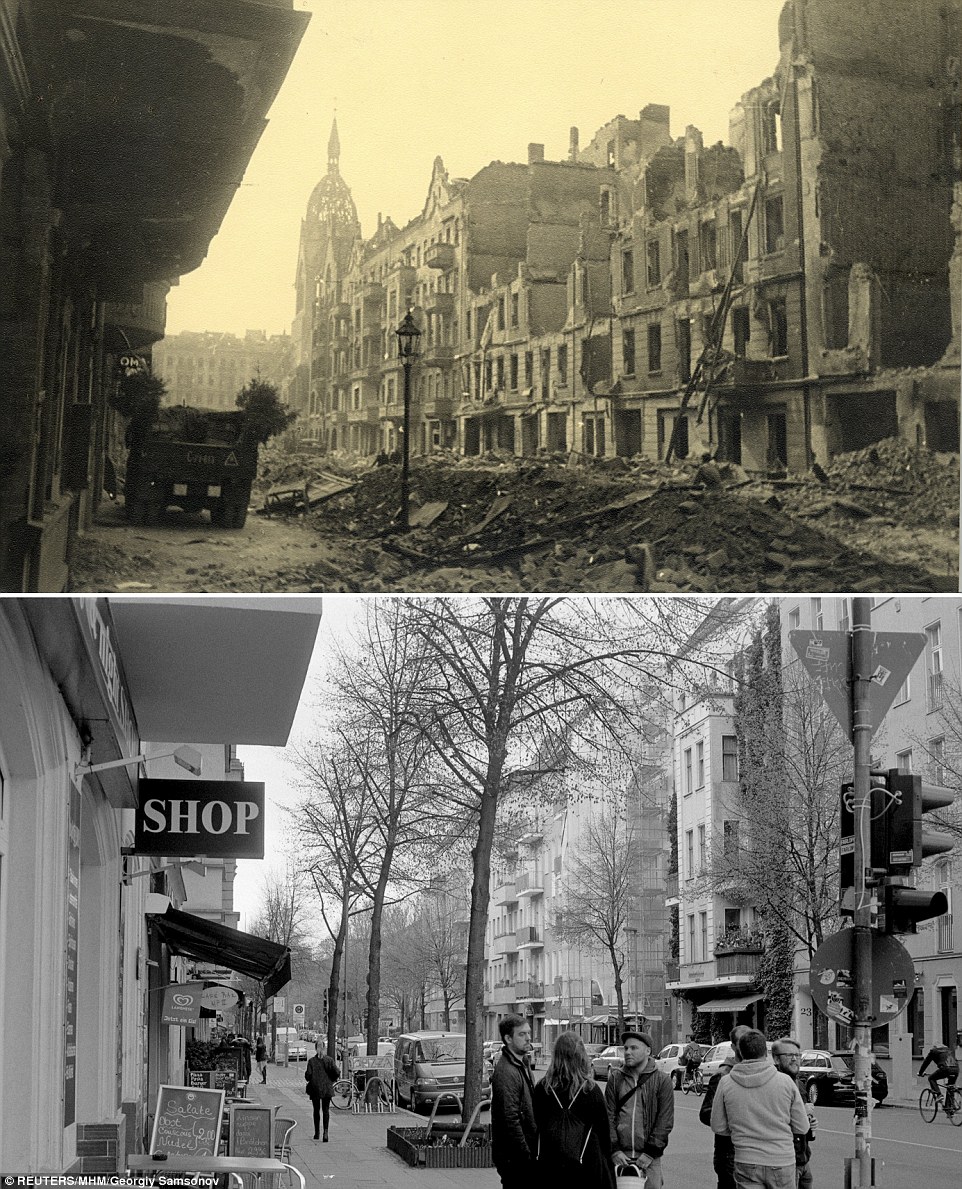 A Soviet vehicle (above) is parked next to the rubble of a row of buildings on Gruenburger Strasse. Some 70 years later a Volkswagen van (below) sits on the street, which is now bustling with shops and cafes 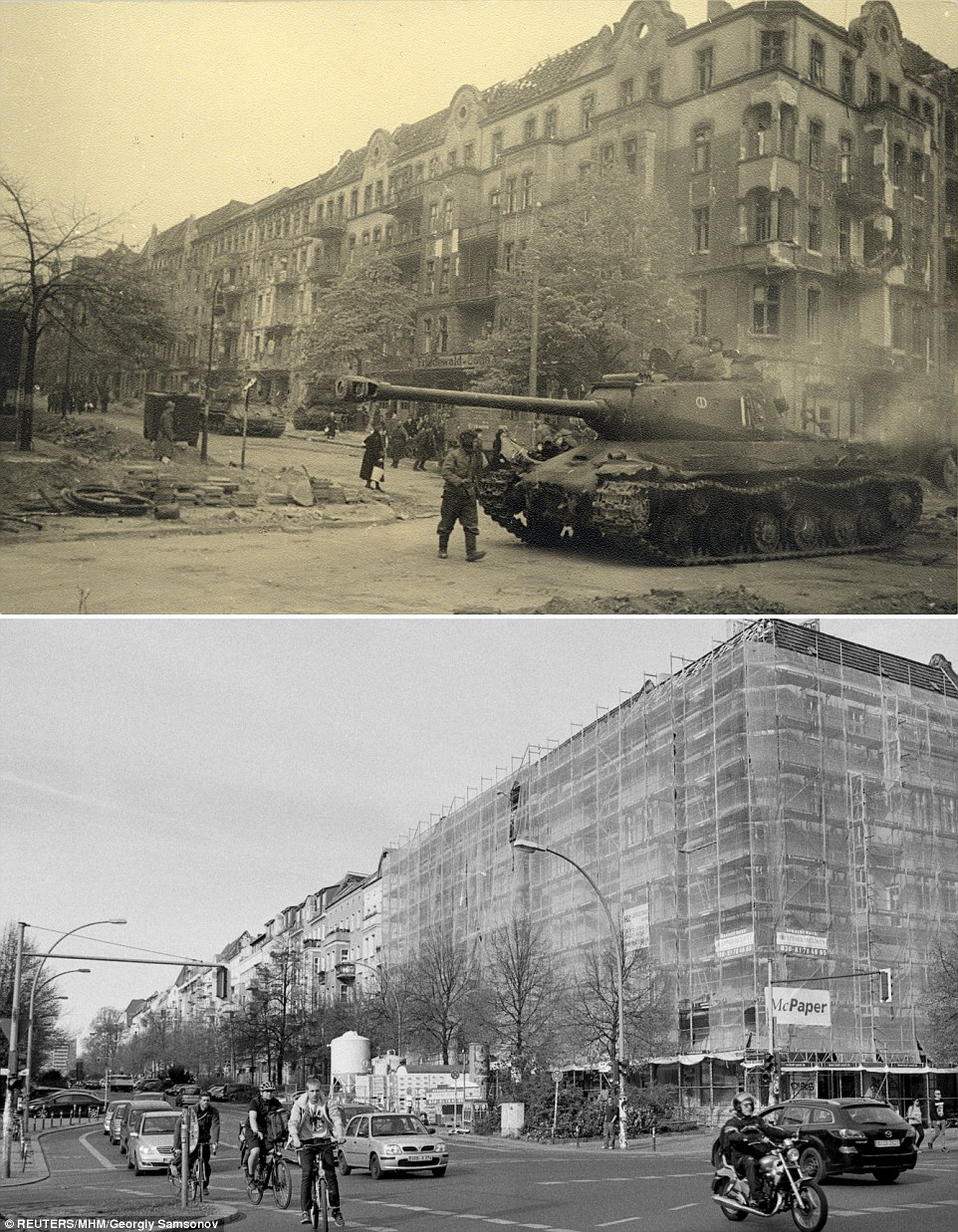 Red Ar.my tanks (above) trundle through a crossroads on the east of Berlin, but the same road is almost unrecognisable now, with many of the buildings (below) renovated after the w.a.r 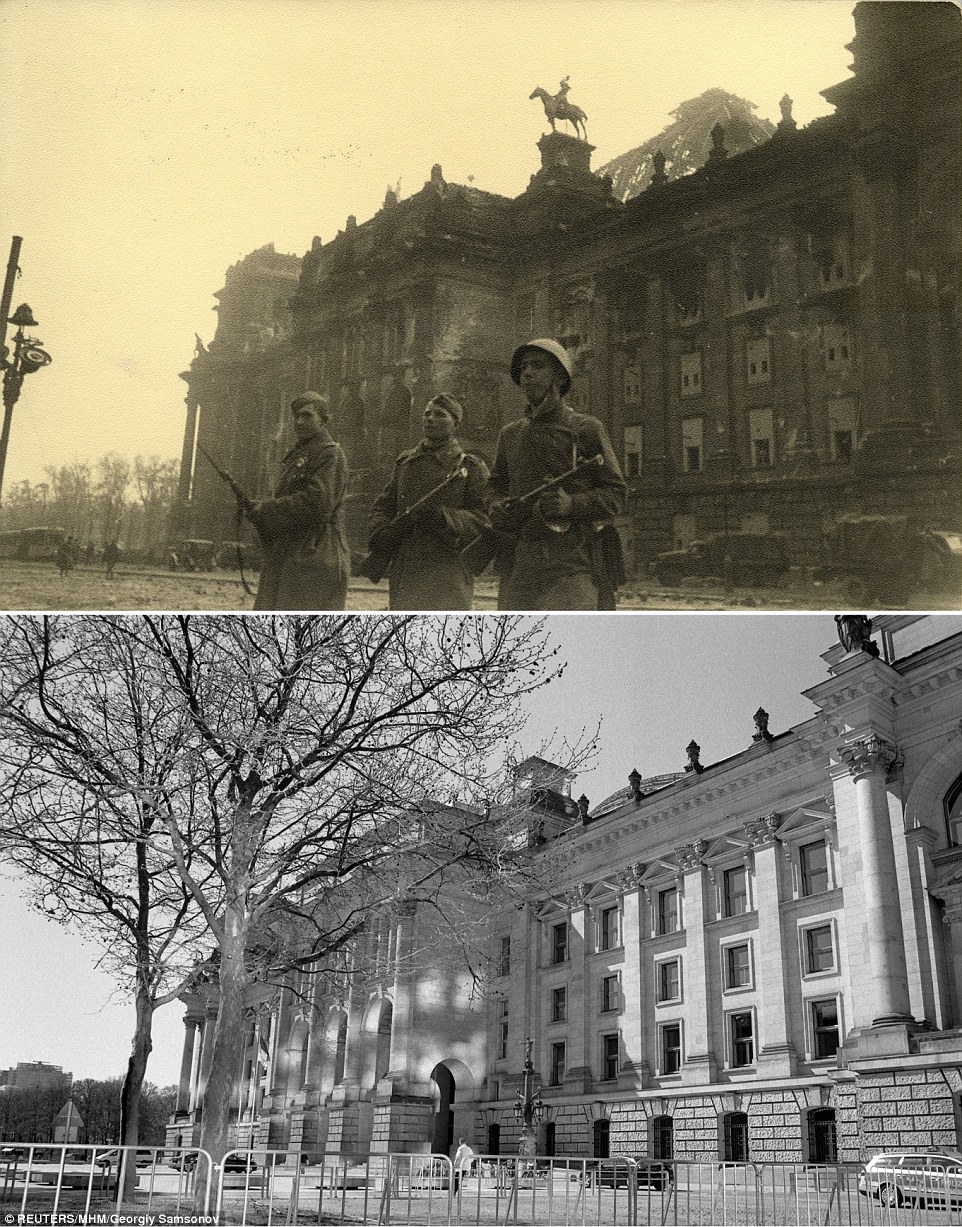 Soldiers gather in front of the heavily damaged Reichstag for a photograph (above), with the historic building still bearing the dedication ‘Dem deutschen Volke’, meaning ‘To the German people’, decades later (below) following extensive repairs

The Reichstag has the appearance of a palace nowadays (below), but its battered shell is scarred by the battering it took during the Second World W.a.r (above) 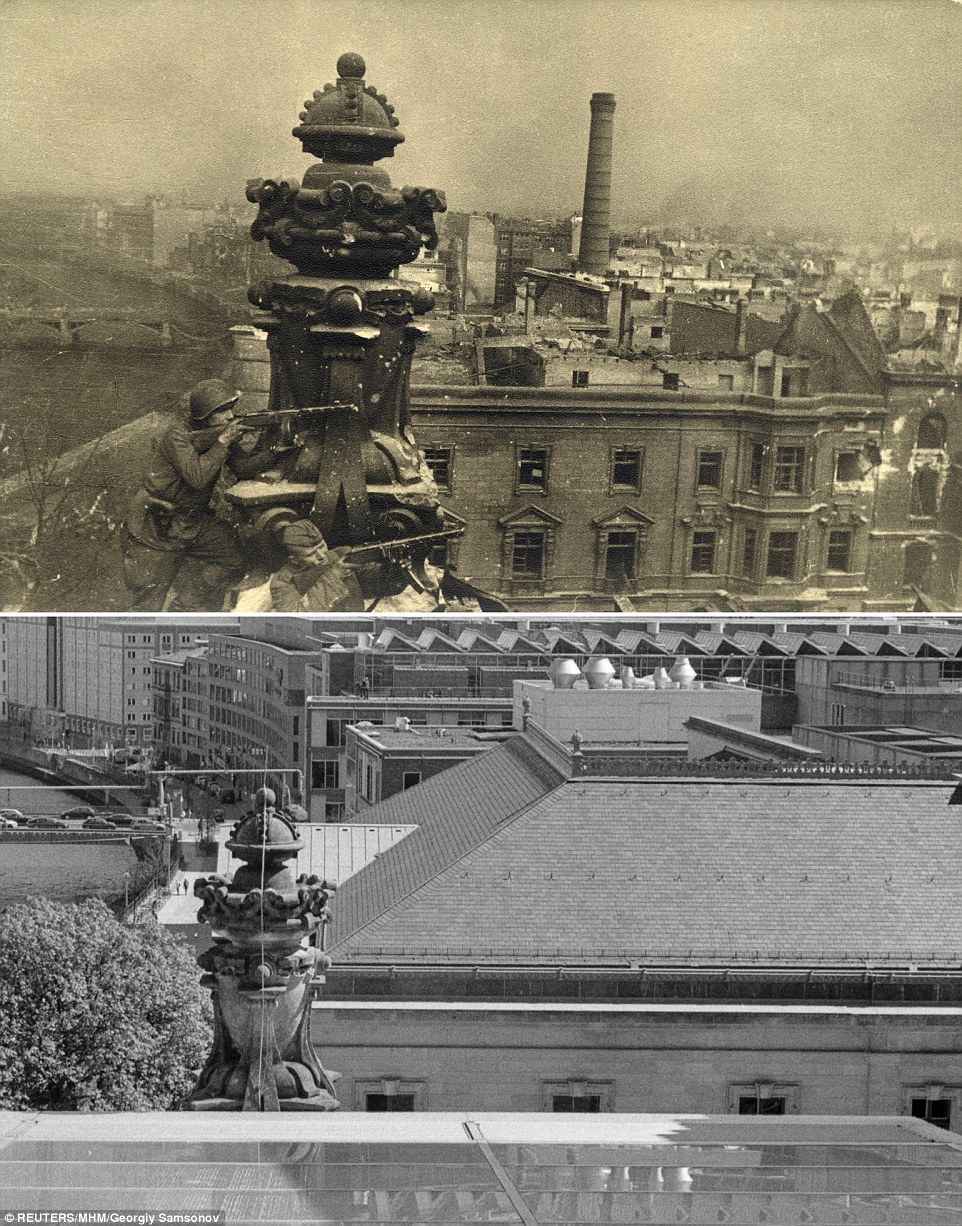 Soldiers take aim from atop the Reichstag in this photograph (above) by Georgiy Samsonov. A picture taken in the same place this year (below) shows people walking next to the river in a peaceful Berlin 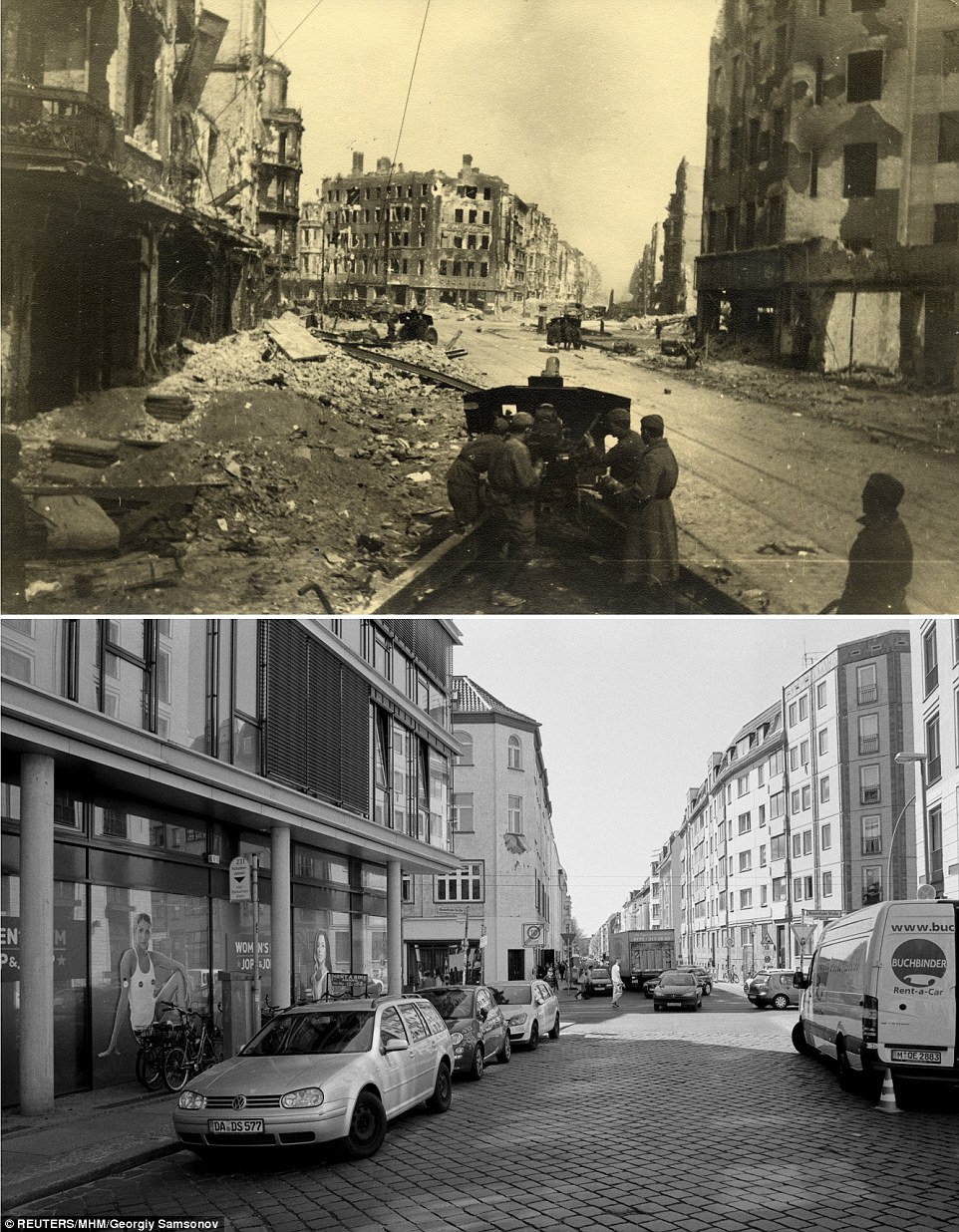 Cannons are prepared by Soviet soldiers in the uneasy days following the fall of Berlin (above), with no sign of the bloody w.a.r now (below)

Families walk down the middle of Borsig Street (above) in the uncertain days after the Nazis surrendered. The scene nowadays (below) is a picture of peace, with cars parked on the side of the upmarket road 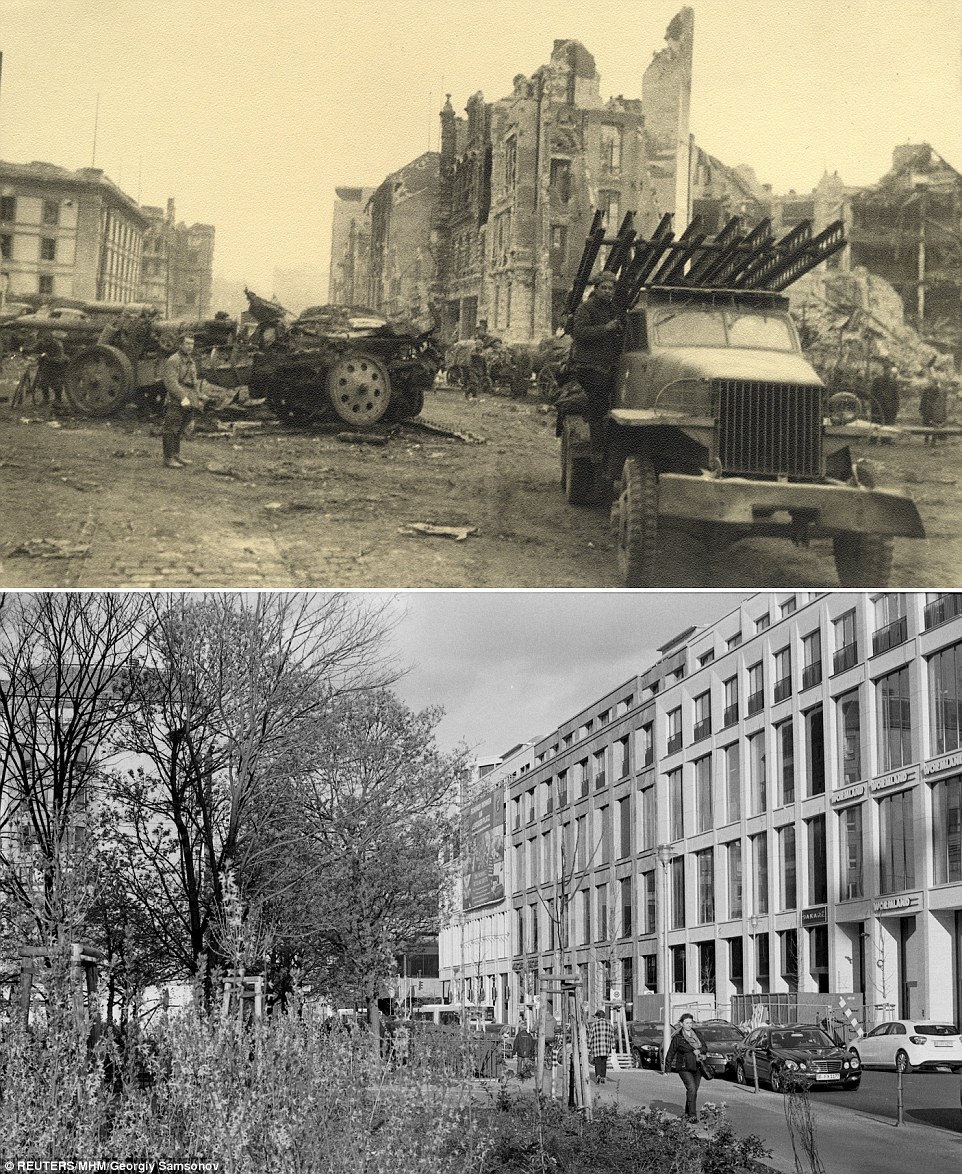 A Red Ar.my tank guards Ritterstrasse (above) in central Berlin, just a short walk from Checkpoint Charlie. This year, a Volkswagen (below) crosses the smart street

Russian ar.my vehicles sit outside the remains of the New Reich Chancellory (above), which took five years to clear and is now social housing and shops (below)

8 of the Most Magical Places in Germany