The “Stairway to Heaven” hike in Hawaii is arguably one of the best-forbidden attractions in the world. Lookup any list of the world’s best hikes – or the most dangerous ones – and you’re bound to see this one on the list. It’s been our goal to hike this stairway for a while, and we can’t believe we did it! 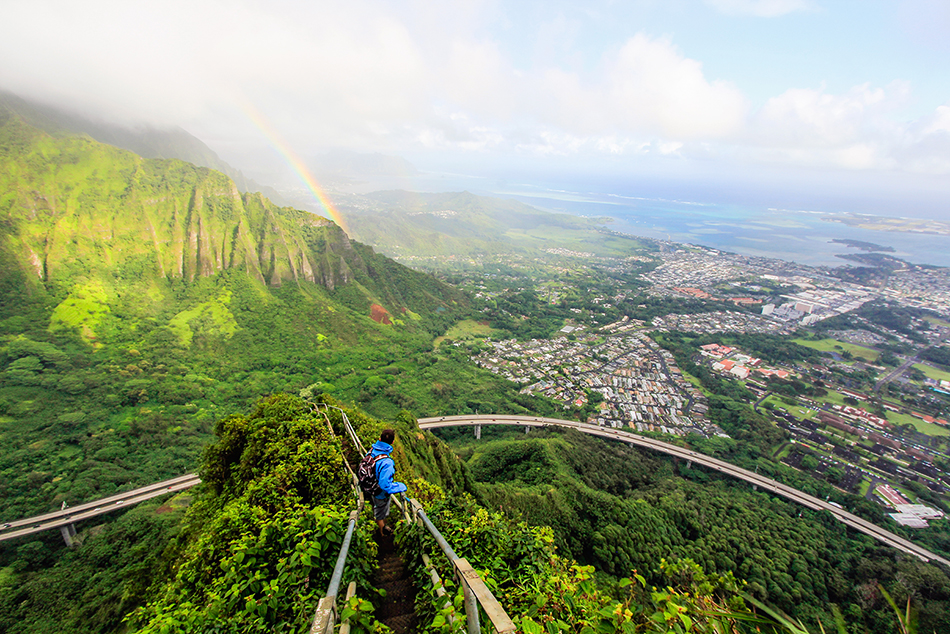 What did it take to achieve this? Only avoiding barbed wire, passing multiple “no trespassing signs”, and making our way past a live security guard. No biggie, right?

THE STORY BEHIND THE HAIKU STAIRS

The Haiku Stairs (ie. Stairway to Heaven) are a set of 3922 steps to the top of the mountain Puʻukeahiakahoe in Oahu (the CN Tower in Toronto has 1776 – so it’s like running up it twice). The stairs were initially built in 1942 for the Haiku Radio Station – a top secret facility for the US Navy to send signals to their ships in the Pacific. With time, it became popular with hikers for its stunning views and hair-raising climb. 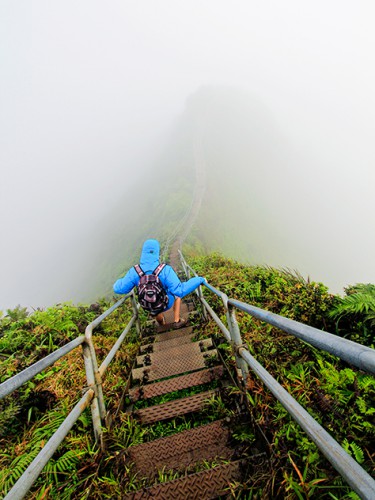 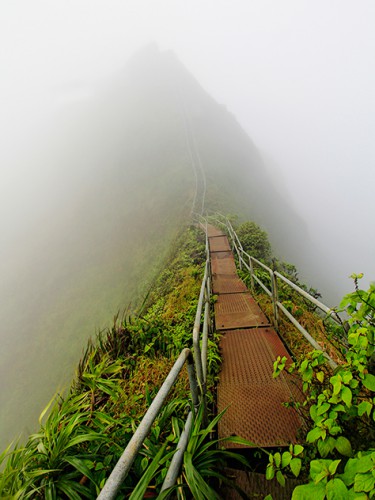 The stairs are a never-ending set of steel ship ladders that are only 45 cm wide. The trail is not for the faint of heart; at times the steps are as steep as climbing a ladder straight up, and most of the time they wind up a narrow ridge with steep cliff drops on either side. Not to mention that at that altitude the weather changes in minutes, from powerful winds to pouring rain.

By 1987, the Radio station at the top closed and the trail shut down. It became illegal to climb the stairs, and hikers could be fined for trespassing. Plus, the government stopped restoring the stairs, and they were left to rust and wear away with the elements.

Despite this, hikers continued to try to reach the stairs. Over the years, the city started going to increasing lengths to ensure the stairs were inaccessible. The road leading to the start of the stairs was shut down, with large fences lined with barbed wire blocking the route. Multiple trespassing signs were posted. In the last couple of years, a security guard has been hired to sit at the bottom of the stairs to watch for hikers. And in the last few months, the police have been known to circle the nearby neighborhood and ticket trespassers with a hefty $600 fine.

Even so, there continue to be hikers who attempt the climb almost every day. The internet is full of success stories, as well as failures of people who were caught, ticketed, or turned away. It is also full of information on how to find the hidden start to the stairs or how to circumvent the multiple barriers in place. We read all the information we could, and headed out on our hiking attempt at 3 AM on a Friday morning with the hopes of catching the sunrise at the top… 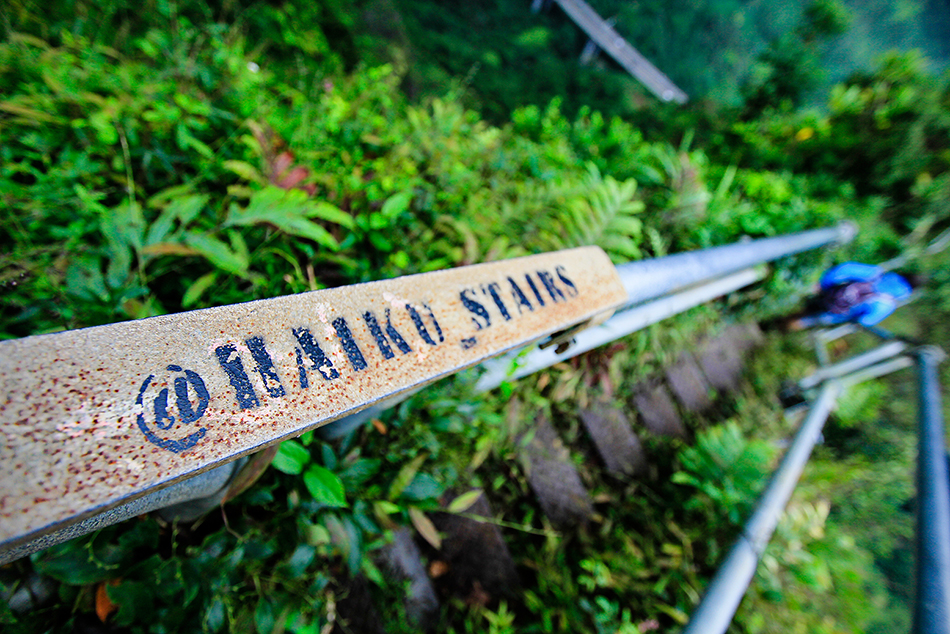 HOW WE GOT THERE

After parking a fair distance away and tiptoeing our way in the dark towards the barricaded gate, we were surprised to see the tall fence lined with barbed wire and marked with numerous “Private Property” signs. We heard there was a hole in the fence – but when we couldn’t find one, we realized we’d have to climb into the jungle to try to get around the gate. After gingerly avoiding the barbed wire along the ground, we squeezed our way through thick jungle vegetation and slid down muddy hills to pop out onto the road on the other side. Our first success! 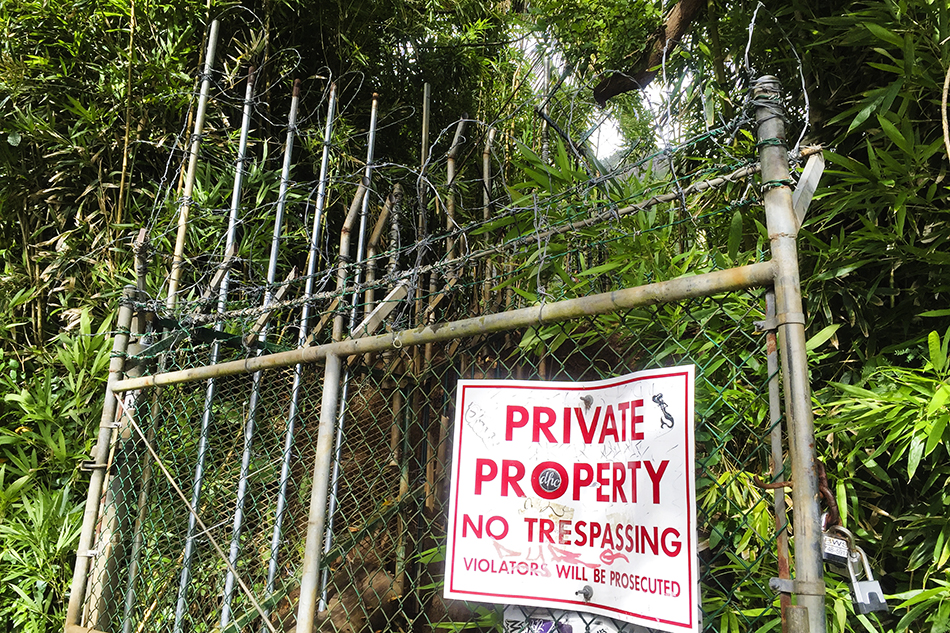 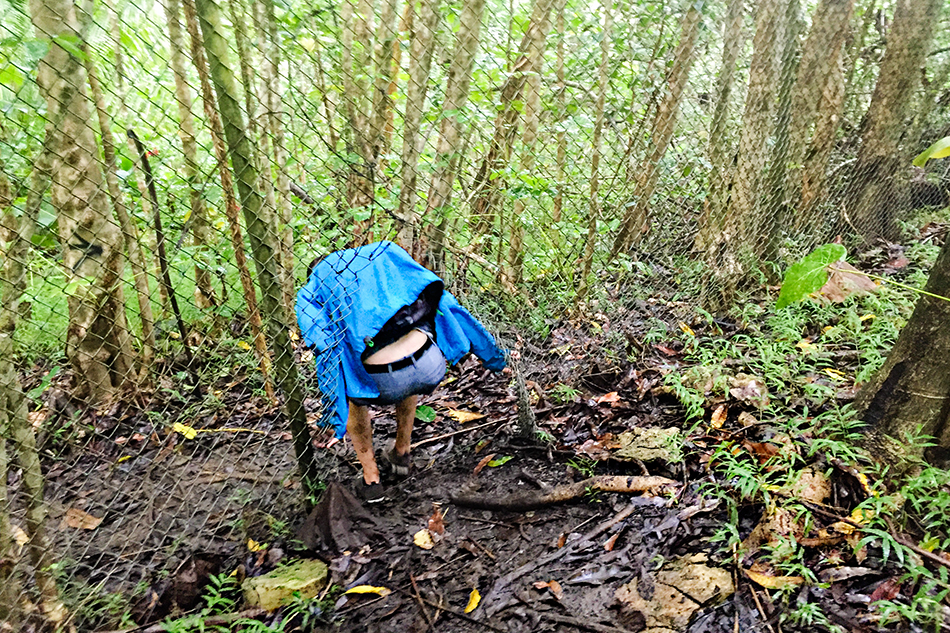 At this point, we followed the general directions we read online (“when you see a small path to the right, take it”… “crawl through the hole in the fence”…) and somehow – I don’t know-how – ended up successfully on the final road to the stairs. Pleased with our success, our heart sank when up ahead we saw a car running, headlights on, with a nearby outhouse: the security guard was on duty. 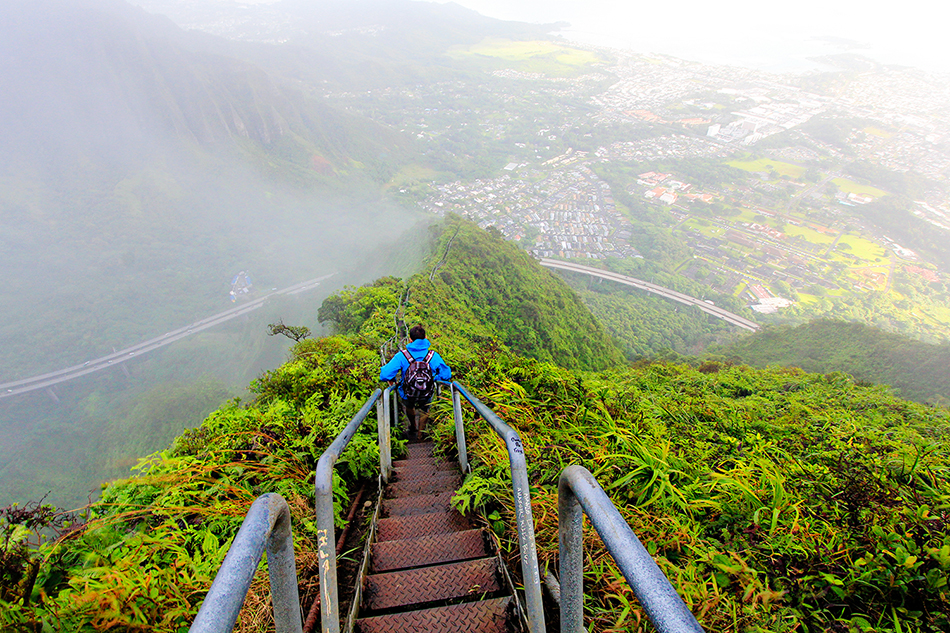 We walked towards him with confidence, and as he shone a flashlight in our eyes we told him we were visitors and would be quiet, careful and litter-free. He informed us that we were trespassing on government property, that the hike was illegal, and that we could be fined if caught by the police. After chatting for a period of time, we figured we won him over when we got him to admit he himself had climbed the stairs a few years earlier. With that said, we thanked him for the information and trudged forward – his headlights illuminating the first set of stairs ahead. 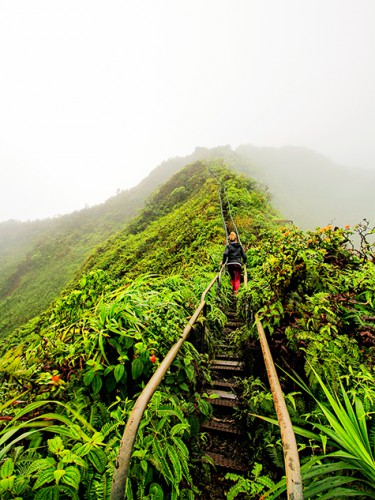 We climbed quietly with our headlamps on, initially crawling up an incredibly steep set of stairs (trying not to look down) and, once on the ridge, heading forward on our snaking climb towards the clouds.

At the very top, we came upon the remaining Radio station, which provided us with shelter from the wind and misty clouds until sunrise. It was also here that we met the few other hikers who, like us, chose to take their chances on the hike that day. 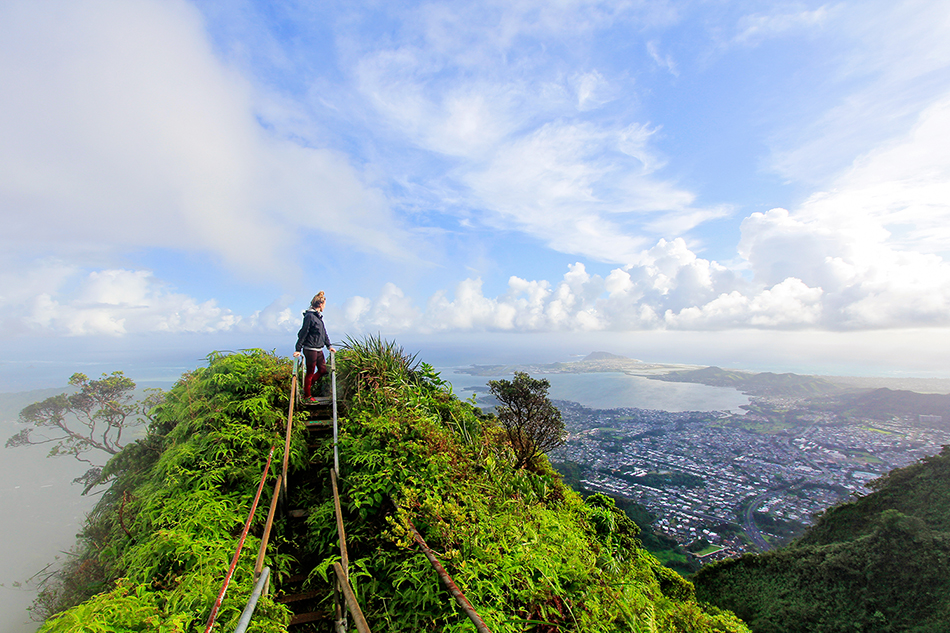 As the sun came up we truly felt like we were up in the clouds. On our descent, the sky cleared and we came to realize how dramatic our climb was and what an amazing adventure we were on. The views were stunning, and we couldn’t help but recognize that we had just successfully completed a once-in-a-lifetime kind of adventure!

These 8 Majestic Mountain Ranges In Hawaii Will Blow You Away