Visit Friesland Netherlands: Discovering Cozy Cities and a Distinct Culture Hidden in Plain Sight at the Top of the Netherlands.

When we told people our first trip of 2017 was to visit Friesland Netherlands, I’ll admit most people’s reaction was pretty similar; something along the lines of, you’re going where?

Other than one blogger friend who had previously lived in the Netherlands (his reaction: Wow, you’re going to visit Friesland! Enjoy working out the language, and enjoy the ice skating!), mostly we just got blank stares, or the digital equivalent thereof.

Simply put, Friesland is not a region that most non-Europeans have heard of and, to be fair, we were among that group. For two people who’ve spent the better part of the last three years in Europe (and having watched CPG Grey’s Holland vs. the Netherlands excellent explainer video more than a handful of times), we’d never thought much about Friesland, and I’d expect we’re not all that unusual in that regard.

That’s all set to change in the next year, as Leeuwarden/Friesland ramps up to serve as the European Capital of Culture in 2018. Predicting a bit of a moment in the spotlight next year, it felt like as good a time as any to poke around the region and see what the sure-to-be-fuss is all about.

And so we jumped on a train heading north from Amsterdam Zuid to Leeuwarden, Friesland’s ultra-cozy and walkable/cyclable capital city. 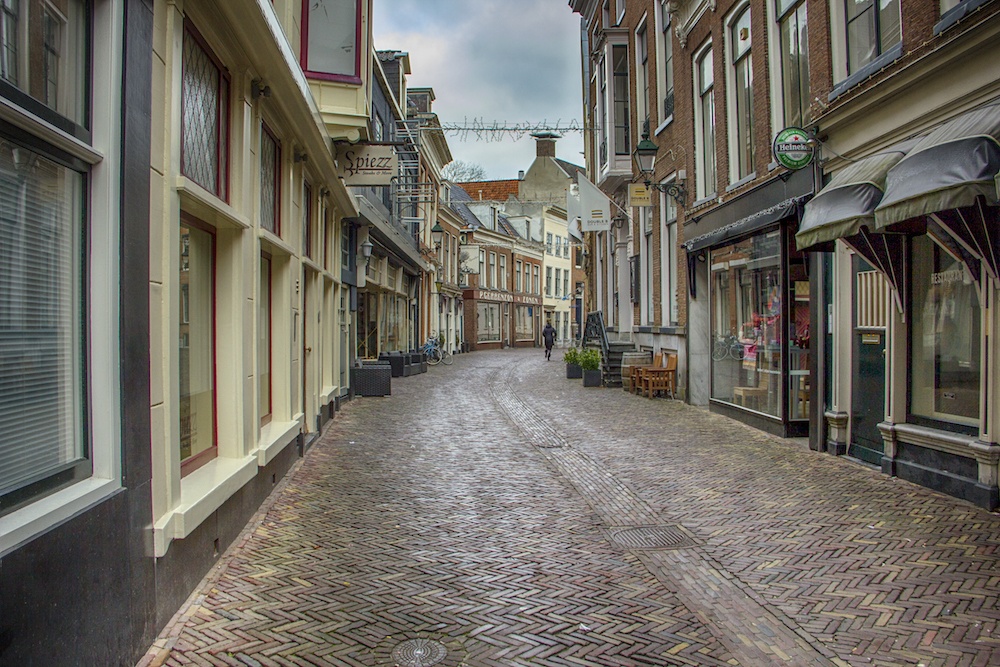 A typical street in Leeuwarden

Getting There: Amsterdam to Leeuwarden

Coming from North America, the first thing you have to do during a trip to the Netherlands is adjust your sense of space and geography, vis-à-vis time spent to get there.

Glance at a map, and Amsterdam to Leeuwarden looks like a commitment: a long ride to the very northern Netherlands. It’s a bit intimidating; it seems to be capital-R Remote.

In truth, it’s more helpful to think of the Netherlands as a megalopolis connected by a highly efficient and comfortable train network, and Friesland/Leeuwarden as it’s own connecting metropolitan area.

Think of it this way: in so many North American cities, it’s not uncommon for someone to spend up to 90 minutes commuting to and from work each day. In the Netherlands, you can drive from Amsterdam to Leeuwarden in about the same amount of time, or relax on a train — nice coffee in hand and excellent wifi for your device — in just over two hours.

In other words, there’s no reason not to tack-on a few day trips to your Amsterdam, and even an overnight or two in different parts of the country. It’s a tiny country packed with gems.

On our first night in the region, we visited a pub in Leeuwarden after dinner, and got to chatting with the bartender, Durkje, about what makes Friesland Frisian*.

As a rule, Geoff and I don’t do too much research about a place before getting there, unless we’re going for a project that requires it. Going in blind, we find, is more interesting and enjoyable; destinations and cultures tend to uncover themselves slowly, and, in our experience, we end up having more interesting conversations with locals. And so it went in Friesland.

Durkje patiently explained to us that, among other things, Frisian** is a separate and distinct language from Dutch, is taught in Friesland schools, and is an official language of the region. While there are political and cultural groups that advocate for more Frisian autonomy within the Netherlands’ federal system, there’s no fierce independence movement to speak of like you find in Catalonia, Scotland, or Quebec.

Like so many things in the Netherlands, it’s just all so damn civilized.

**There are actually three different Frisian languages. West Frisian is the language spoken in the Netherlands’ Friesland province, and for ease, I’m referring to it as Frisian, no West. 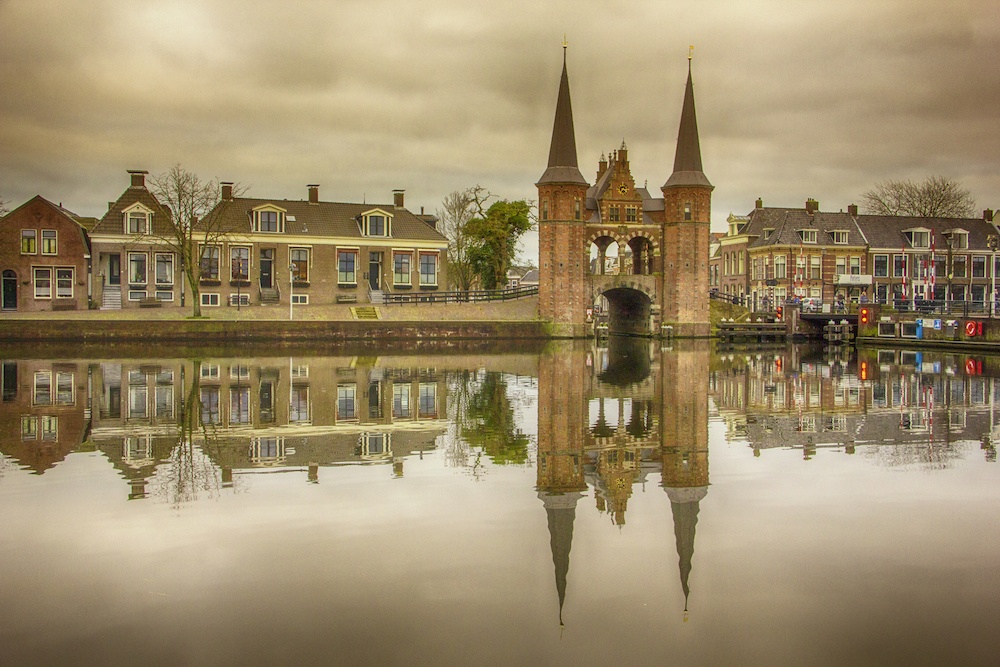 The Waterport in Sneek, Friesland, Netherlands

Before you even arrive in Friesland, it’s obvious there’s something special about the region.

For one, the language changes. After four weeks in Amsterdam and Gelderland (a central-eastern province we’ll be writing about soon!), our ears had gotten used to the sounds of Dutch. And while we certainly had no idea what was being said, we could tell, “hey, they’re speaking Dutch!” The syllables and rhythm and intonation became familiar.

Standing in the vestibule of a jam-packed train heading north from Zwolle, that all changed and our ears struggled to adjust. A close cousin to English (and similar-ish to Old English), it sounded to our foreign ears like a mix of English, German and Dutch. Over the course of our visit, there were multiple times when we thought a shopkeeper was speaking to us in English, and we’d of course answer in English, only to have an awkward pause when they realized we weren’t Frisian. They’d then switch to actual English, and we’d walk away wondering what the heck just happened, unable to tell where Frisian ended and English began, even though we couldn’t actually understand the Frisian.

And then there’s the water. Frisians are a people driven and a culture shaped by their special relationship to the water. In Sneek, one of the 11 historic Frisian cities that we visited, one of the main attractions is the WaterPort, a beautiful 17th-century city gate that’s a window to how Frisians used to live; a reminder of a time when canals outnumbered roads as the primary way of getting around the city, and the water was embedded into daily routines.

Even in the frosty throes of winter, water — or more specifically, the ice it forms — is a dominant force in Friesland. Before we’d even arrived in Leeuwarden, people had clamoured to tell us about the Elfstedentocht, an 11-cities, 200-km (120 mi) ice skating race that happens any year in which the ice is thick enough. It’s only been held 15 times, first in 1909 and last in 1997, when it attracted approximately 2 million people to the province.

There’s something wonderfully refreshing about a culture that, in the deepest and coldest of winters, people rejoice and prepare for one of their most celebrated cultural expressions while the rest of us retreat indoors. 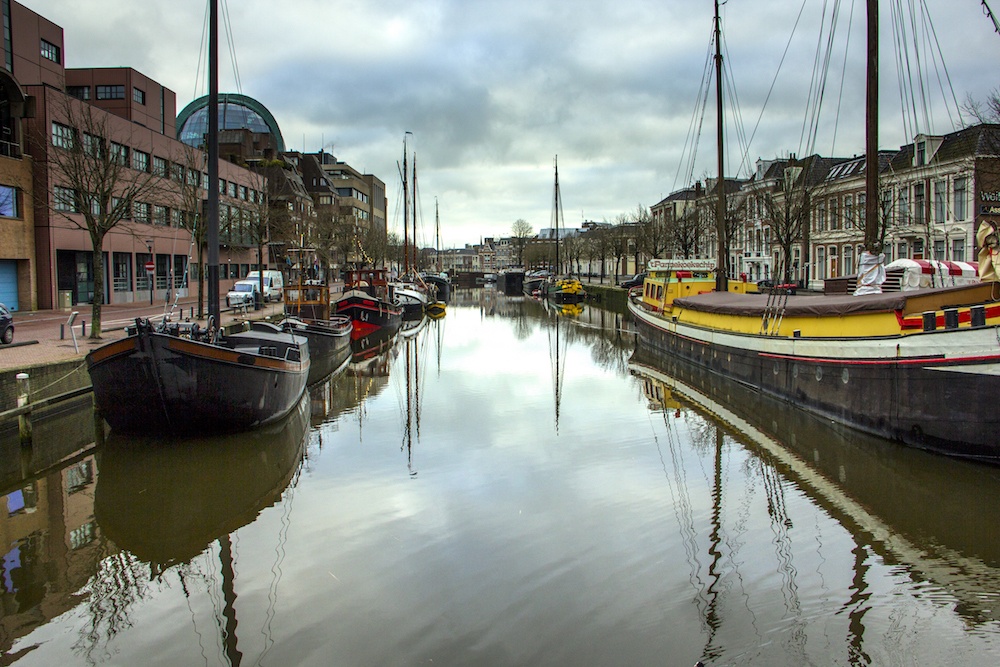 A beautiful canal in Leeuwarden

Why You Should Visit Friesland

Had we visited Friesland in the summer, our trip would have been very different, I’d expect.

In the very north of the province and the country lie the Wadden Islands, an upside-down pearl necklace serving as a hat to the Netherlands. Here, summers are shaped by walks and bike rides along vast and windswept landscapes, nature and the sea, and quaint villages and towns. In the cities, everything springs to life as people flock to terraces and the water, or hop on their bikes to explore the region under their own power.

As it happened, we visited in early January, arriving in Leeuwarden on a day when the city was lying snugly under a heavy blanket of wet fog. The theme of our trip was moody explorations, our wanderings broken up by stop after stop into cozy spot after cozy spot, asking locals about their home as we went.

Along the way, we found a region with people who seemed even more friendly-to-visitors than their extraordinarily friendly Dutch compatriots, and a unique and distinct culture that is hidden in plain sight at the top of the Netherlands.

How to Spend 3 Days in Rotterdam