They say that an elephant’s family ties can be stronger than those of even the closest knit human clan.

And the bond between this elephant calf and its relatives probably saved this youngster’s life when his family rallied round to save him from drowning when he got stuck on a muddy riverbank.

A touching set of pictures taken in the Sabah region of Borneo show the calf getting into difficulty as it tried to clamber up the steep bank after crossing the river Kinabatangan with his mother. 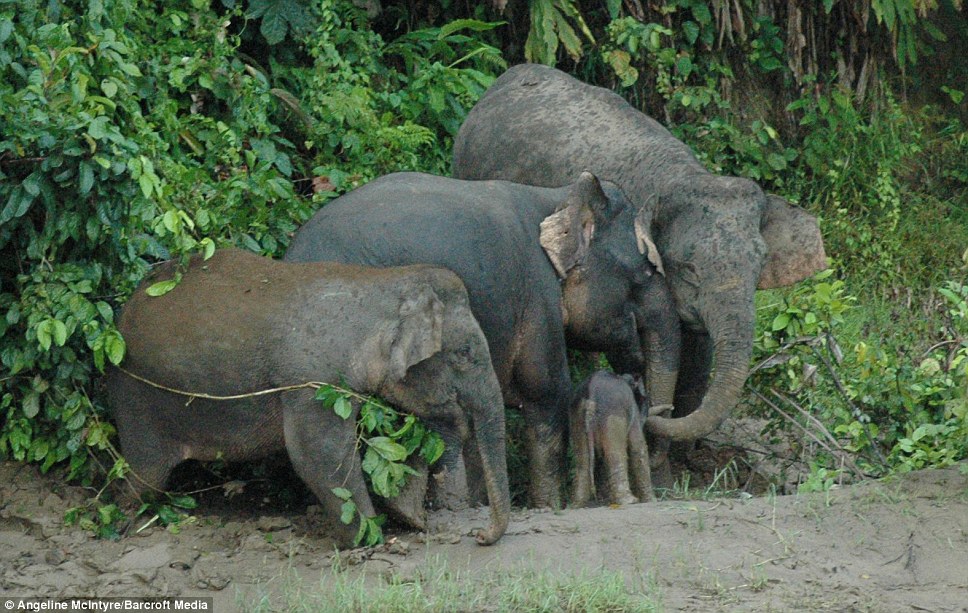 Family affair: The elephant clings closely to his relatives after they came to his aid when he got stuck on a muddy riverbank 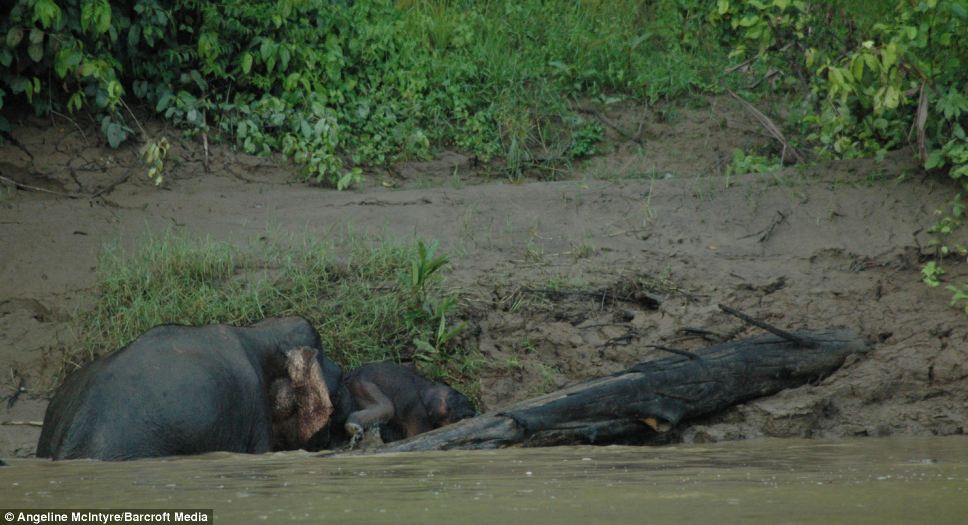 Mother’s love: The elephant had got stuck on the muddy bank after swimming across the river with his mother. Heshe is pictured helping him out of the water 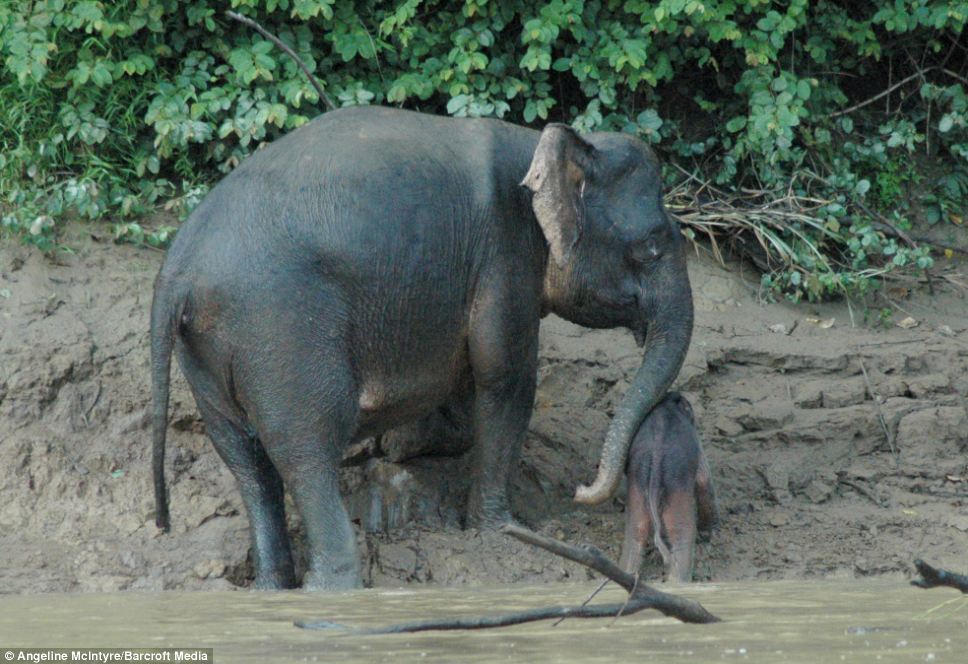 Slippery: While the adult elephant has no problems getting to grips with the mud, the baby struggles to get a grip without falling over 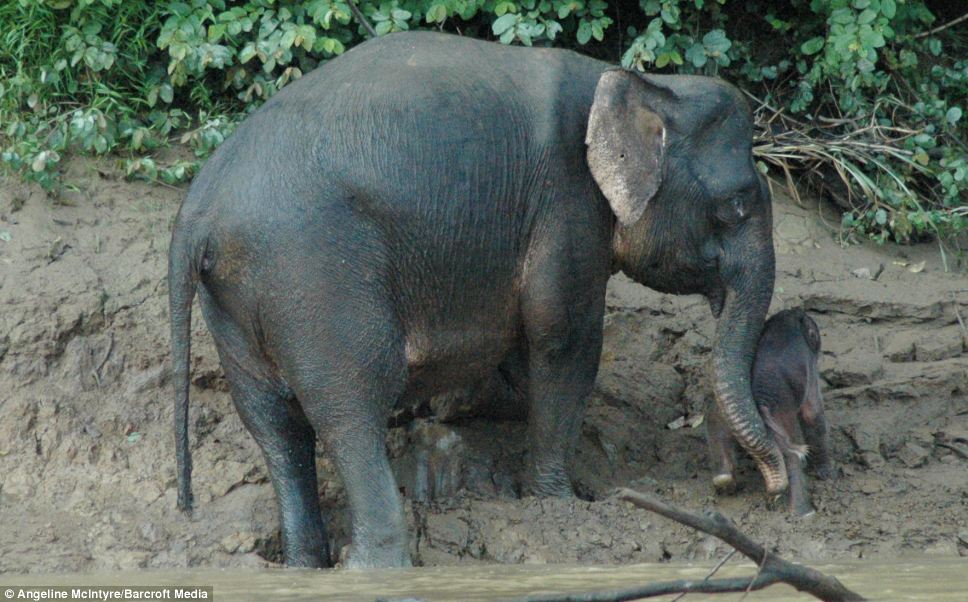 Stuck: The mother tries to push the baby up the bank using her trunk but is unable to get him to safety

With the youngster distressed, their mother tries to come to his aid by pushing him up the bank with her trunk.

But the task proves too tricky for her on her own.

Given the animals’ traditionally close family bonds, it is no surprise that two relatives came to the rescue.

The pair managed to flatten the mud around the calf, making it easier for him to climb to safety.

Once the calf is safe, the adult group gathers around him as he clings close to his mother’s legs in an adorable show of unity.

Photographer Benoit Goossens, of the Danau Girang Field Centre in Sabah, said that it took all three adults about half an hour to get the baby on its way again. 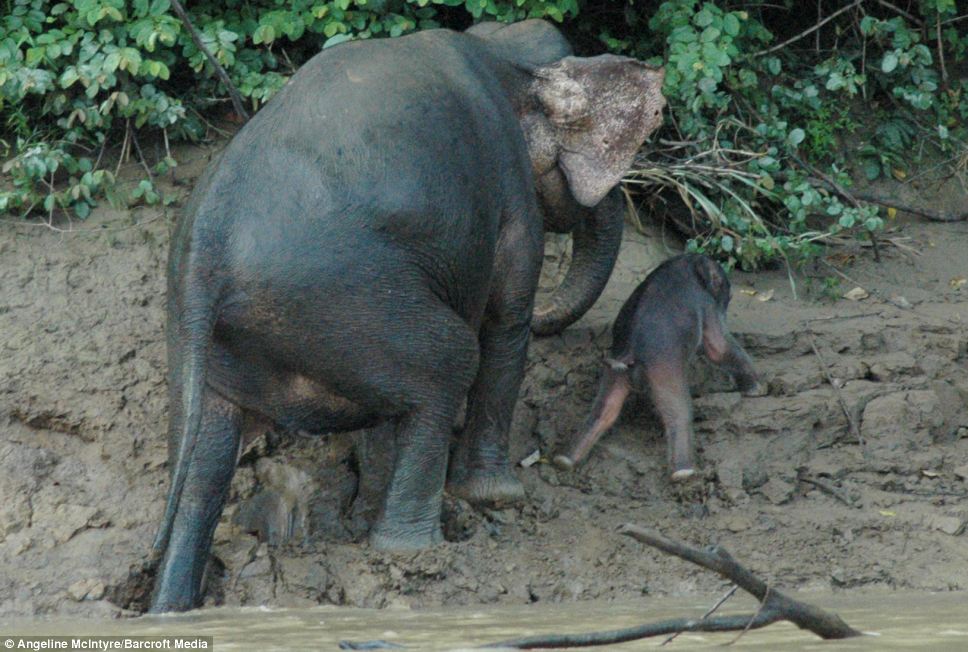 Not moving: The distressed elephant is unable to make it to the safety of the trees and is seen slipping 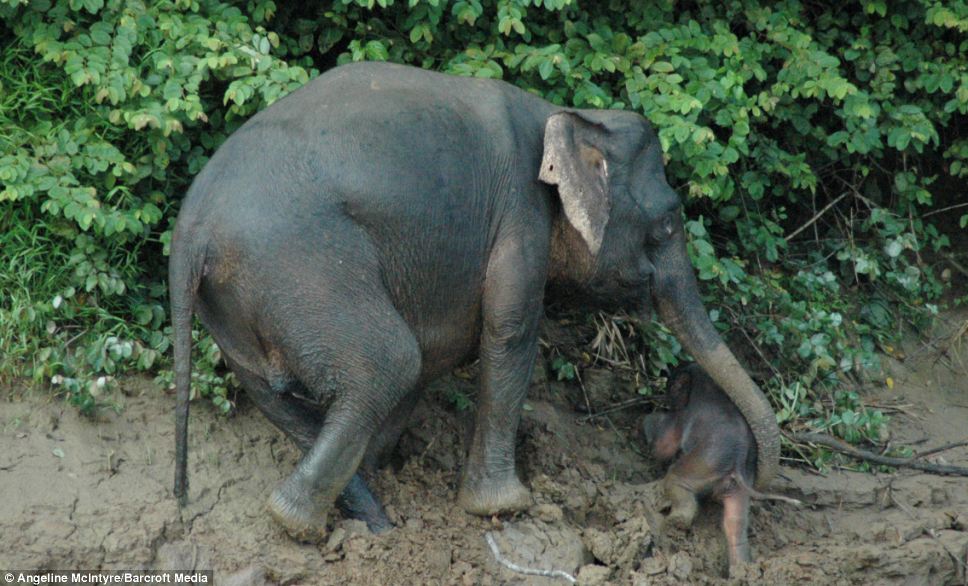 Helping hand: The elephant has nearly made it to the top of the bank thanks to a little help from his mother 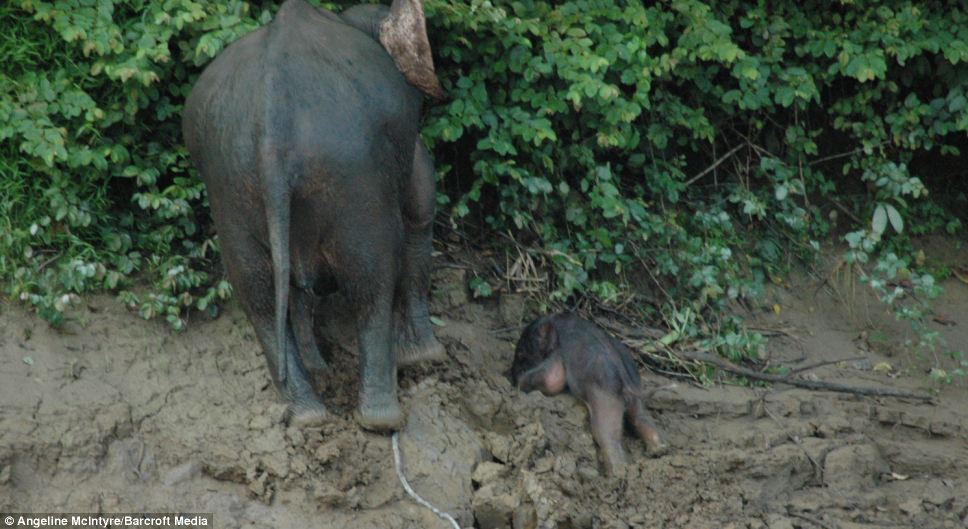 Distressed: But the poor baby elephant slips in the mud once again

He said: ‘The mother and baby were crossing the river but the bank proved too steep for the calf.

‘The mother tried to push it but she couldn’t manage on her own so-called on two members of her family.

‘While the mother pushed the others flattened the mud to make it more accessible for the calf. About half an hour later they were all on their way.’

Benoit described the sight as ’emotional’.

He added: ‘I’ve been studying elephants for many years but some of the students I was with were blown away by the elephants’ behavior.

‘It goes to show that animals often take care of each other better than humans.’

Elephants are known for living in tight-knit matriarchal families with adult females looking after their sick, injured, or orphaned offspring.

Like human offspring, calves remain with their mothers until they are teenagers, with some female elephants known to stay with their parents for their entire lives.

Elephants usually give birth to one calf every two to four years with their babies already weighing around 200lbs when born and standing at 3ft tall.
They eventually grow up to 9.8ft tall and consume a staggering 270kg of food a day.

Asian elephants have been domesticated for thousands of years. The powerful beasts have been employed to move heavy objects, such as felled trees, to carry humans on their backs, and even to wage war. 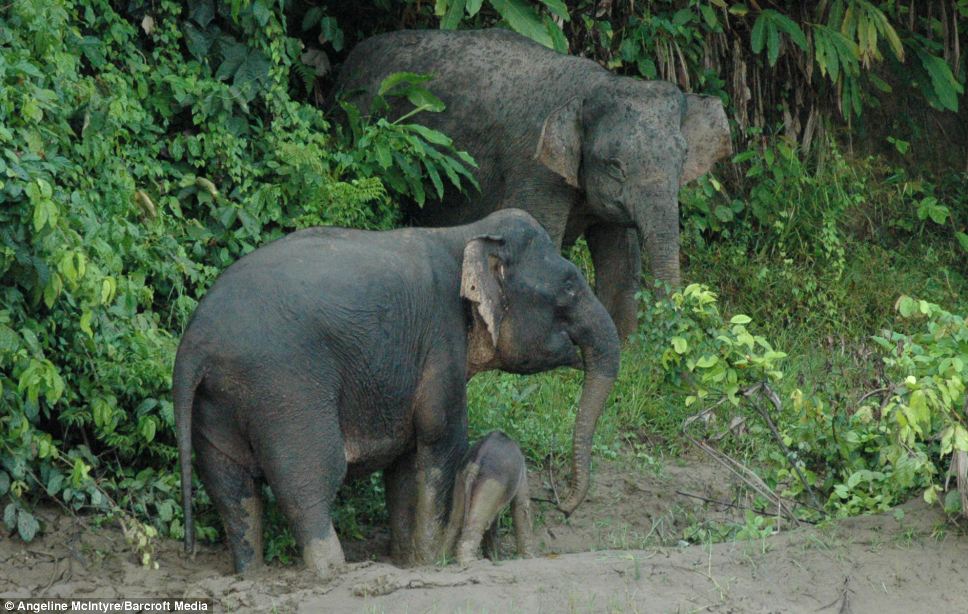 Close bond: Another two elephants emerge from the trees to give mother and baby some help 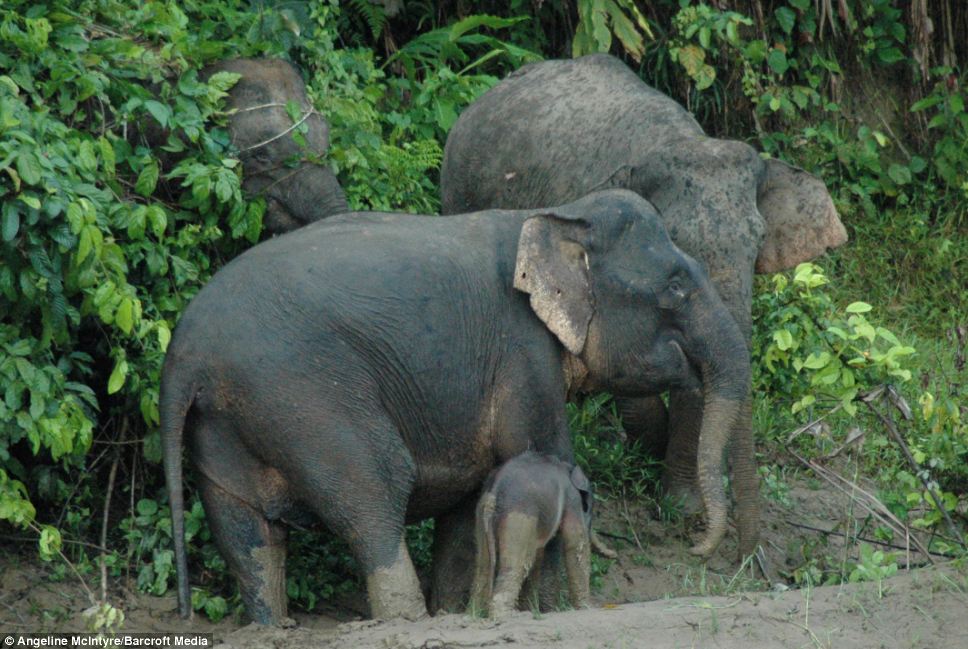 Cavalry: The elephants clear a path for the baby, flattening the boggy mud to ensure its safe passage to the trees 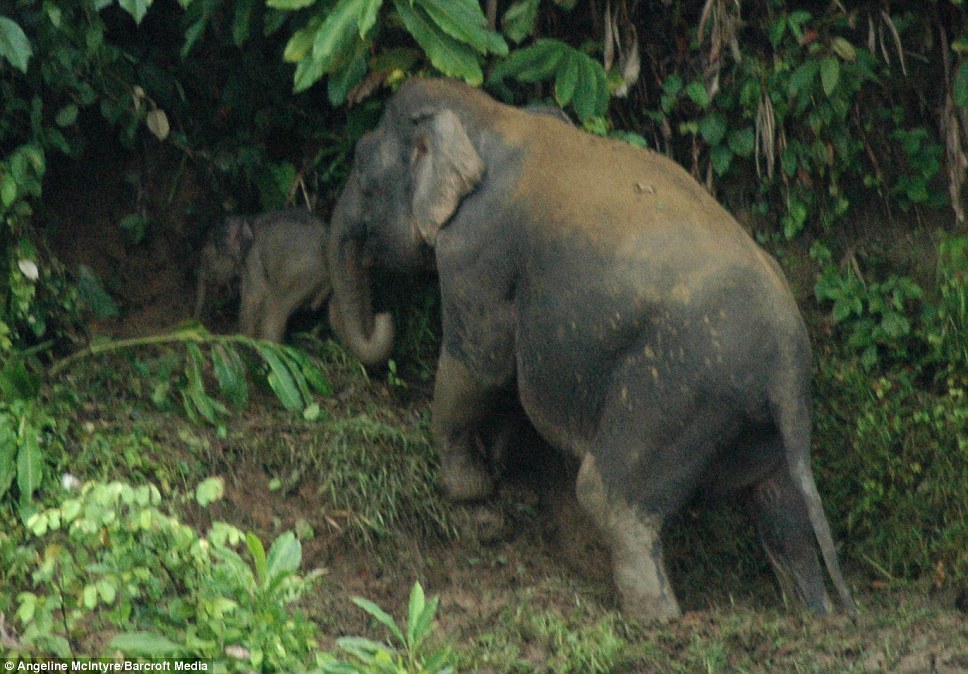 Safe at last: Covered in mud, the little elephant is ushered into the trees by his mother

Trapped elephant clambers out of canal after rescuers throw it ladder