In northwest Austria, surrounded by Alpine peaks and dotted with centuries-old architecture, Salzburg—a quaint medieval city of 150,000 residents—is packed with a not insignificant amount of cultural points of reference.

For many international travelers, however, the most recognizable thing about this riverside city is that it’s where many scenes from The Sound of Music were filmed, and a huge percentage of visitors come specifically to see these Silver Screen locations. Many of them only come for a few hours before heading off to their next destination or returning back to their cruise ships.

As much fun as it is to live your Maria von Trapp fantasy for a half a day, there’s a lot to stick around Salzburg for that has nothing to do with climbing every mountain or fording every stream.

For history (and beer) enthusiasts, for instance, there’s the massive Stiegl brewery, which was erected in the 15th century; the imposing Hohensalzburg Fortress, which lords over Salzburg, is one of the largest on the continent; the city played an important role during the Protestant Reformation, and it is covered with countless Baroque churches; and then, there’s the prodigious Wolfgang Amadeus Mozart. Despite the staggering number of impersonators you might see walking around Vienna, it’s actually in Salzburg’s Old Town where he was born.

And layered on top are more contemporary experiences that speak to today’s Salzburg, where the von Trapps comprise but a small part of the narrative. Austria just announced that it has reopened its borders to U.S. travelers, meaning there’s no better time to discover what else makes this city sing than right now.

For classic luxury, there’s only really one choice: Hotel Sacher Salzburg, the five-star stalwart that’s been housing politicians, royalty, and celebrities since the 19th century. Its riverfront perch offers peerless views of the Old Town, but inside, it’s all about feeling like you’ve stepped into a noble residence. Think: lots of beautifully carved wood panels, perfectly layered drapes, priceless antiques, and oversized crystal chandeliers. The staff is only too happy to serve guests a slice of the famous Sacher Torte—the chocolate cake that was invented at its sister hotel in Vienna. 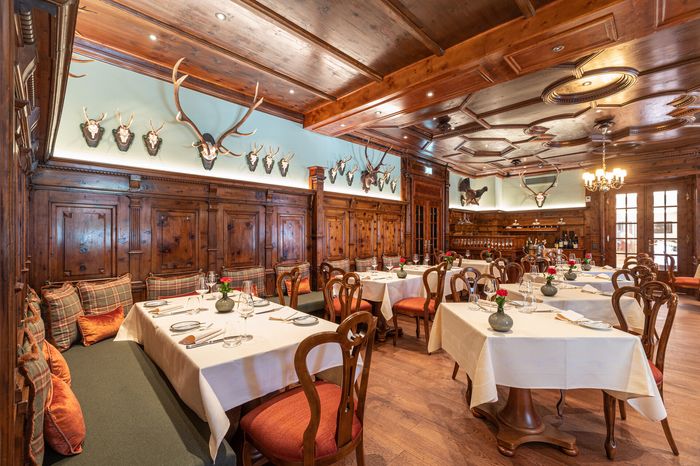 Hotel Sacher Salzburg, a five-star stalwart, has been housing politicians, royalty, and celebrities since the 19th century.
Hotel Sacher

Arthotel Blaue Gans, which puts you on centrally located Getreidegasse, presents more minimalist accommodations. A boutique property that specializes in uncluttered, curated interiors, Blaue Gans combines outstanding architectural details (thanks to the building’s history that dates back to the 16th century) with more modern furnishings. The rooms’ original wood beams, decorative stucco molding, and vaulted ceilings are strikingly complemented with plush velvet sofas, mid-century side tables, and sculptural light fixtures. Throughout, find over 100 original works by artists like Timm Ulrichs, Christian Ecker, and Julius Deutschbauer. WHERE TO EAT AND DRINK

Inside Hangar-7—billionaire and Redbull owner Dietrich Mateschitz’s museum-like homage to aircrafts and race cars—is Ikarus, a two-Michelin-starred fine-dining destination that features a rotating schedule of guest chefs. The culinary program is overseen by Eckart Witzigmann, who travels the world to recruit for temporary kitchen partners. Previous names invited to create modern, multi-course tasting menus here include Sicilian chef Ciccio Sultano, whose Ragusa restaurant Ciccio Sultano Duomo is known for presenting dramatic, extravagant meals. And in September, Belgium’s Tim Boury, whose restaurant Boury in the tony town of Roeselare also has two MIchelin stars, will be overseeing the Ikarus kitchen.

For something more traditional, the walls of St. Peter’s Abbey claim to house Europe’s oldest restaurant: First opened in 803, St. Peter Stiftskulinarium’s elegant interiors are all about hand-painted walls and dramatic chandeliers, which perfectly complement the kitchen’s authentic Austrian fare. Start with the black-bread dumpling soup, crowned with a foam of Stiegl beer, followed by stick-to-your-bones beef goulash, before committing to an iconic Salzburgian dessert—the three-mounded, souffle-like Nockerl. At Meissl & Schadn, you can tuck into yet another national delicacy: the schnitzel. They take their schnitzel so seriously here, you can even pick the oil in which it’s fried.

For a meal with a view, make your way up to Steinstrasse, on the rooftop of Hotel Stein, for its globally inspired menu and the best dining vistas in the city. The terrace overlooking Salzburg’s Baroque rooftops attracts a well-heeled crowd, who pair plates of king crab tiradito and teriyaki meatballs with classic cocktails built with distilled-in-Austria spirits.

For those who come from outside Europe, Salzburg has become one of Austria’s most popular tourist draws largely because of music: Mozart’s 18th century birthplace (now perched atop a chain supermarket) can be visited in the Old Town. The Oscar-winning 1965 movie The Sound of Music was filmed in and around Salzburg, and there are plenty of guided tours that stop at its shooting locations, including Mirabell Gardens and the Pegasus Fountain, where Maria and the Von Trapp children sang Do-Re-Mi. The famous Christmas carol Silent Night was penned nearby.

And every year the classical music community descends on the city for the Salzburg Festival, which staged its 100th edition last year. While some of the celebratory events were held last year, the city will continue to fete this milestone through summer 2021 with 14 performances of Hugo von Hofmannsthal’s dama Jederman and concerts from classical music bigwigs like the Vienna Philharmonic, Christian Thielemann, and Riccardo Muti, who at 80 is making his 50th appearance at the festival.

But if you want to give your auditory nerves a break, there’s still plenty to do to make a well-rounded itinerary: Ahead of the multi-course feast at Ikarus, it’s absolutely worth it to explore the Hangar-7 grounds. Redbull is based in a small village in the outskirts, and this stunning all-glass gallery by the airport is a grand showcase for a priceless collection of Formula 1 race cars, historic fighter planes, and other brand paraphernalia. Hangar-7 also hosts rotating art exhibitions—from photography to sculptures—so there’s much more to the space than just a fancy dinner.

And for a more modern expression of performance art, check out SEAD, or Salzburg Experimental Academy of Dance, a small studio that organizes a variety of shows that orbit around contemporary choreography brought to life by its own company (under the Bodhi Project program) or by visiting international troupes.

For a little retail therapy, walk up and down Getreidegasse, which is home to some super traditional shops marked by ornate guild signs. One of the most artisanal is Kirchtag Umbrella (Getreidegasse 22), which has been around since 1903, fashioning high-quality umbrellas—most of which can be custom-made and every part is created by hand, from the handle rod to the canopy cloth. Getreidegasse is one of the more popular tourist thoroughfares in town, and such, there’s a McDonald’s, but so that the fast-food chain will blend in with its Medieval surroundings, even its double-arch sign has been reimagined to look centuries-old and emblematic of the district. Judging by the number of people taking pictures of it, it’s safe to say, they’re loving it.

12 Photos That Will Make You Want to Visit Austria