Germany have rarely been mentioned among this summer’s leading contenders but, in the best game of Euro 2020 so far, they produced a sensational response to their doubters. It was a triumph for Joachim Löw, whose reign has looked close to ending miserably, and included an individual performance that may not be bettered all tournament.

Robin Gosens wreaked havoc down the left flank and Portugal simply could not cope; he forced the own goal from Ruben Dias that restored parity after a brilliantly worked opener from Cristiano Ronaldo, created Germany’s third for Kai Havertz and emphatically added his own to take matters beyond the point of no return. Portugal, who may feel unlucky that Raphaël Guerreiro also scored at the wrong end in a frantic spell after the half-hour, struck last through Diogo Jota but were well beaten in a potentially transformative statement from their hosts.

A scintillating first half ended with Löw entitled to feel vindicated. It was no mean achievement given Germany, criticised in the buildup for being shot-shy, had not put the ball in the net themselves. But they had contrived an exceptional, intense and insistent display that showed genuine mental strength, too, given the blow they were dealt after 15 minutes.

Portugal had barely left their own half by that point and Ronaldo had looked like someone in need of, say, a caffeine kick. Then a Toni Kroos corner was cleared beyond the far post and Bernardo Silva, offered the entire right flank to run into, turned on the afterburners. His diagonal pass to Jota, completed after carrying the ball 50 yards, was wondrous and the Liverpool forward’s chest control perfectly cushioned; now all Jota had to do was look to his right where Ronaldo, who had eaten up plenty of ground himself, tapped in.

It felt like a seismic moment in Germany’s tournament. They had already felt acute disappointment when Gosens’ early goal was ruled out by VAR for an offside against Serge Gnabry, who had stretched for and missed Matthias Ginter’s delicious cross.

A decisive combination between his right-sided centre-back and left wing-back might have silenced the critics who had wanted Löw to change the team that showed France too much respect on Wednesday. He stuck with the same system, an interpretation of 3-4-3, and must have been bracing himself for brickbats after Ronaldo applied such a hefty punishment.

Instead Germany, who had also come close through Kai Havertz and Kroos, came again in waves after a short spell licking their wounds. They had just begun to work up another head of steam when Gosens, an irrepressible presence all half, volleyed across goal with venom and was rewarded when Dias deflected the ball past Patrício with Havertz hovering. 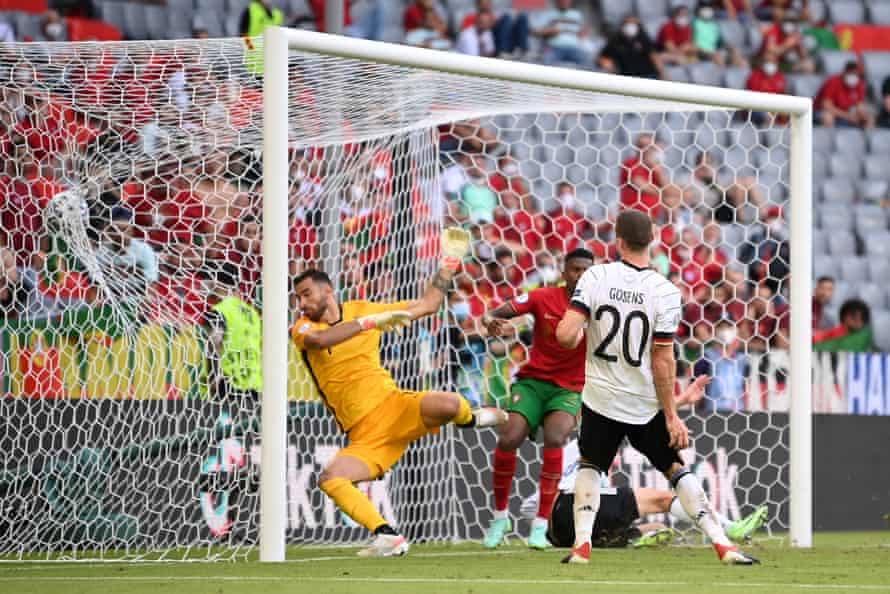 Three minutes later, with Portugal now firmly pegged back again, came a near carbon copy. This time an isolated Havertz strained to convert Thomas Müller’s lobbed cross but could not connect fully; Joshua Kimmich retrieved the situation on the byline and Guerreiro could do little more than bullet the resulting cutback into his own net at point blank range.

Gosens broke again and stung Patrício’s palms; then Serge Gnabry, a perpetual menace, forced an even better stop. Germany could have led by more at the interval and whatever this was, it had nothing to do with over-caution.

Fernando Santos appeared to feel it owed at least something to Bernardo Silva’s lack of protection for Nelson Semedo, his struggling right-back, against Gosens. On came Renato Sanches and, as it turned out, so much for good intentions.

Five minutes into the second half a slick interplay of passes culminated in Müller finding Gosens completely open again. Gosens slipped when crossing but it did not matter: every final ball he delivered all evening had information on it. This one was deftly converted on the run by Havertz, whose place in the team had been under scrutiny, and Germany had the margin they deserved.

Then, on the hour, Gosens found the goal he richly merited. It sprung from another flowing move, although Portugal’s level of pressure on the ball was abysmal. Kimmich had all the time he needed to cross from the right and Gosens, hanging in expectation at the back post as if no other outcome was possible, converted a thudding header.

It seemed a fair time for Gosens to depart, receiving a prolonged ovation as he did. But Germany’s job was not completely done and Jota, finishing simply after Ronaldo had strained to keep a free-kick alive, set nerves jangling again. Sanches almost put everyone on tenterhooks but rapped the post, and Group F could not be more tantalisingly poised.

The Most Stunning Portugal Islands You Should Visit