Hippos are widely considered to be the most dangerous animal in Africa – but that didn’t stop a group of about 50 audacious turtles from trying to turn one into a giant sun lounger.

The giant hippo, weighing in with a mass of up to 2.5 tonnes, was ambushed by dozens of much smaller pan-hinged terrapins after going for a quick dip at a waterhole in South Africa’s Kruger National Park.

The water-loving reptiles, seen in marshes and slow-moving rivers in South Africa, enjoy basking on rock faces – not to mention the odd grumpy hippo – or floating close to the water surface.

Kruger National Park describes its hippos as ‘waterway wallowers which are a common sight in most watering holes and are often in herds, but they’re also very easily mistaken for grey rocks.

‘Their snouts sometimes even look like crocodile noses when they’re just floating beneath the surface of the water.’

But be warned, if they open their massive jaws and expose their humongous lower canine teeth, that means they feel threatened. 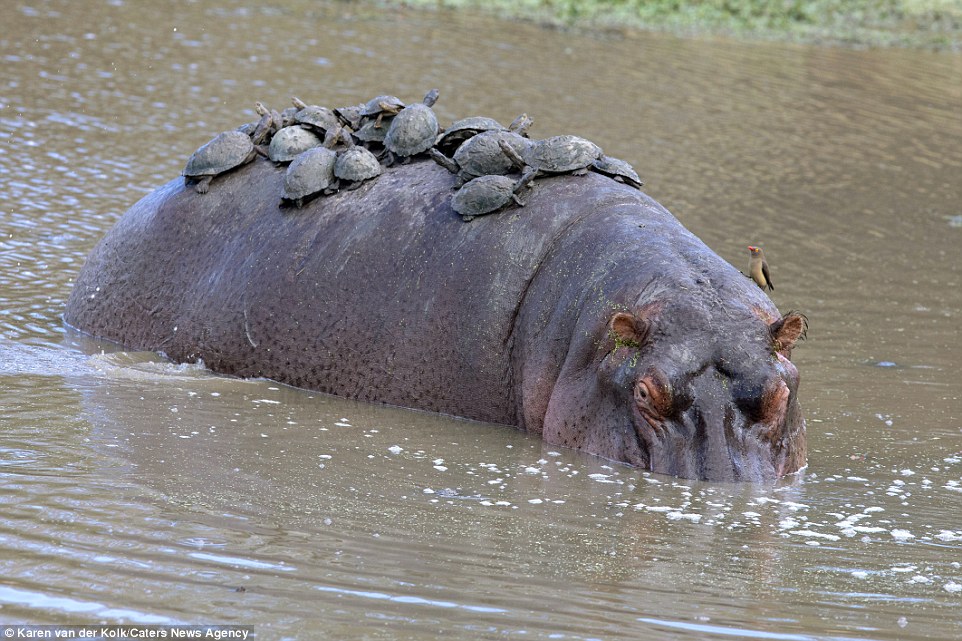 This hippo looks distinctly unimpressed after pan hinged terrapins start clambering up his back while he wallows in a watering hole in Kruger National Park, South Africa 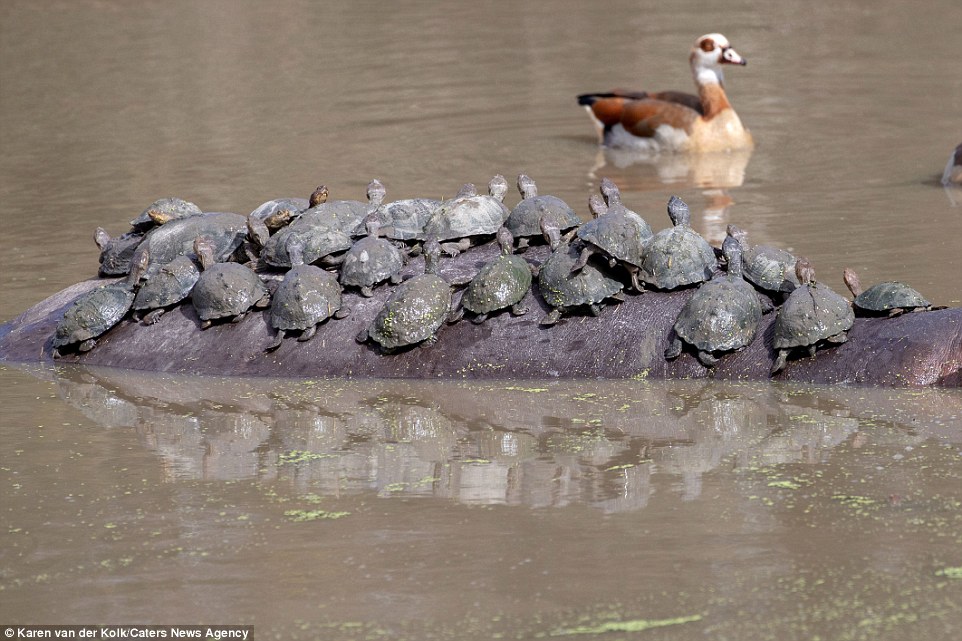 About 50 reptiles ended up on the hippo’s back, despite him sinking lower into the water, to try and get rid of them 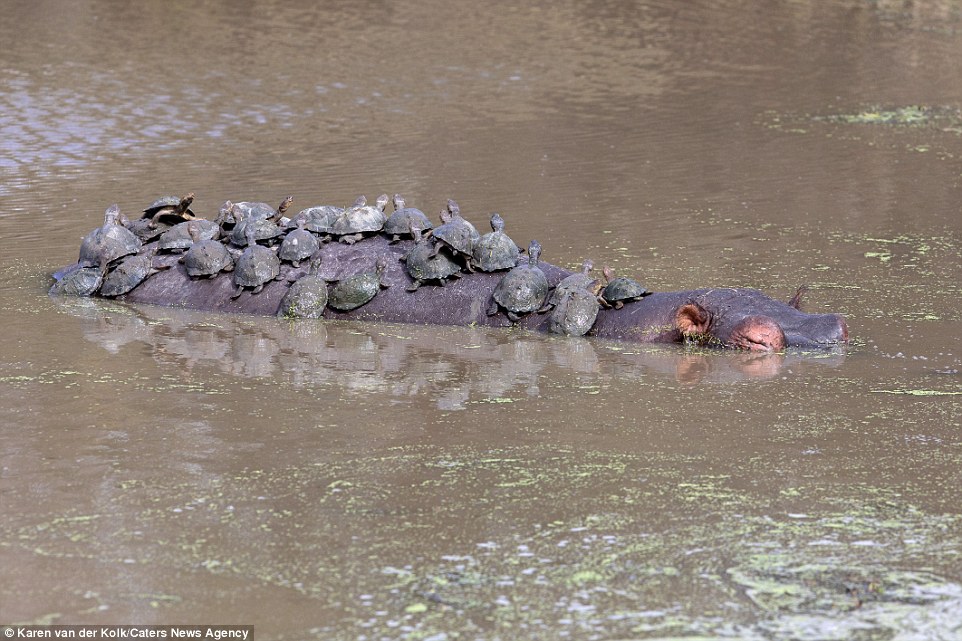 Photographer Karen van der Kolk, 45, who captured the unique moments while visiting the park, said: ‘It was such a funny scene. We stayed the whole morning’ 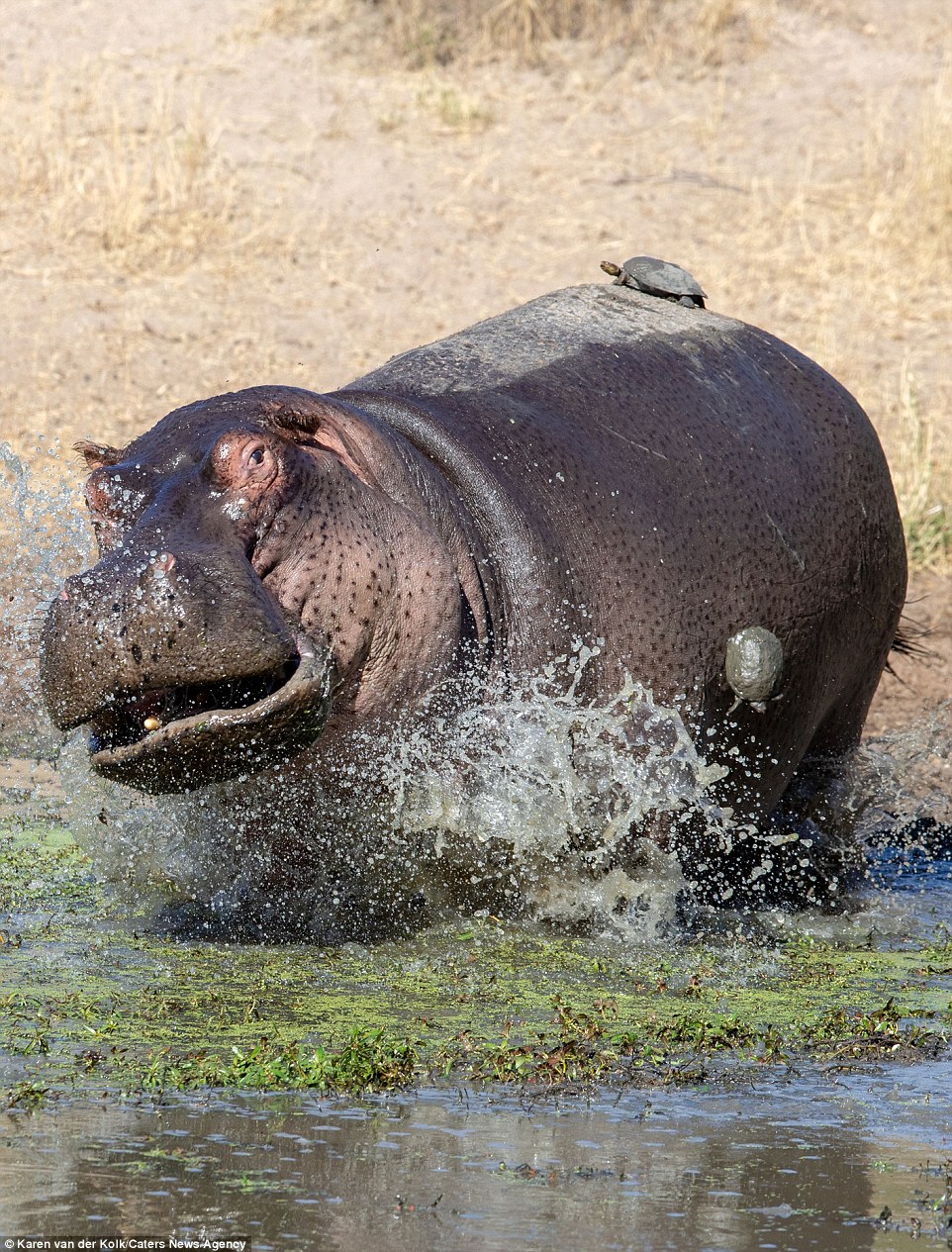 On shaky ground: the funny sequence of photos shows the hippo being climbed on by the terrapin until he walks out of the water and starts to get rid of them 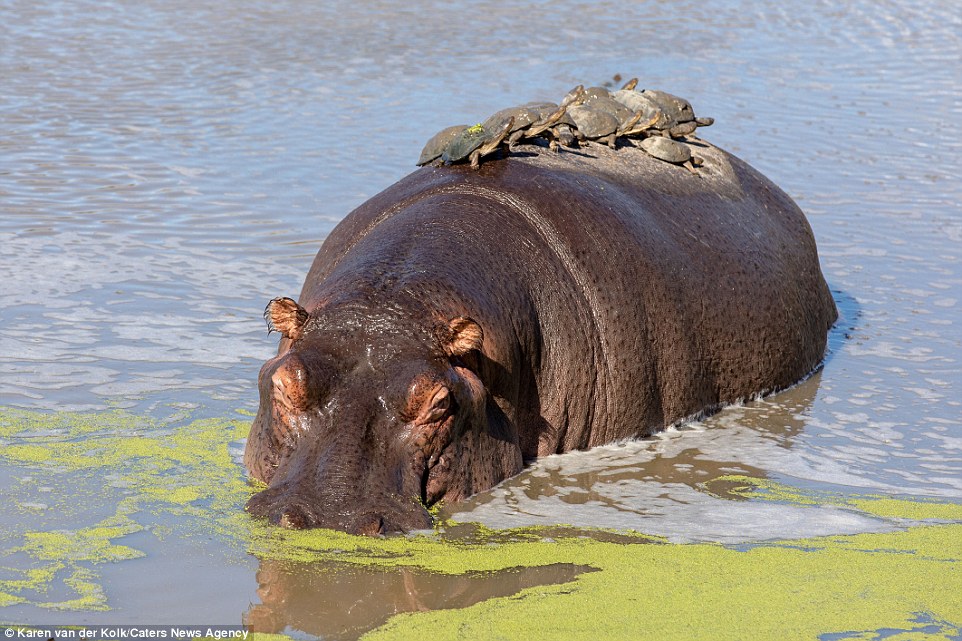 You wouldn’t think it while looking at this photo, but apparently, at some Kruger National Park rest camps near rivers, such as Lower Sabie, you can hear these great animals laughing in the rivers at night’, according to the park’s online guide 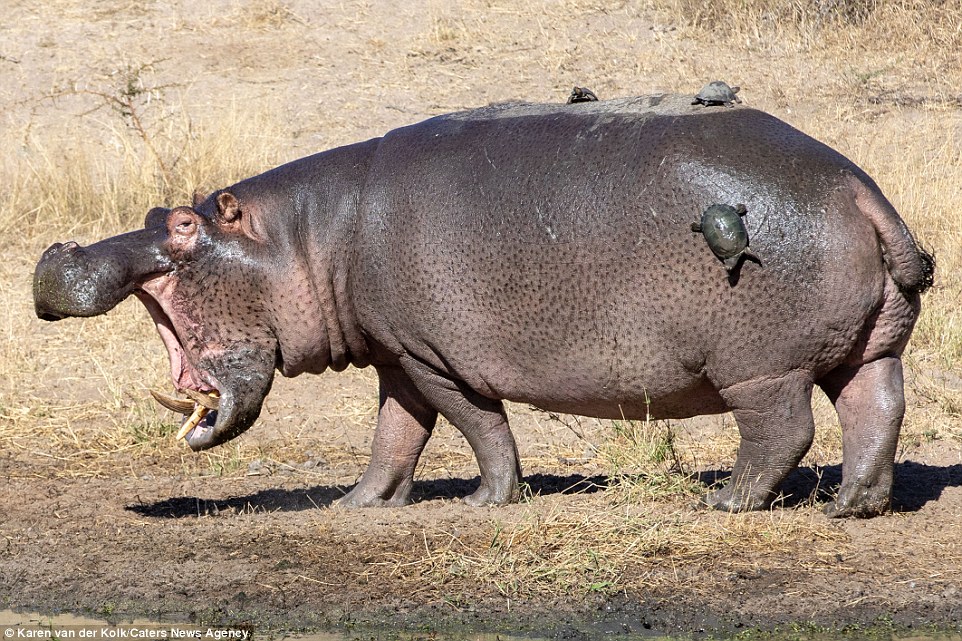 The hippo once ranged from the Nile Delta to the Cape but is now mostly confined to protected areas. Kruger National Park says that if they open their massive jaws and expose their humongous lower canine teeth, that means they feel threatened 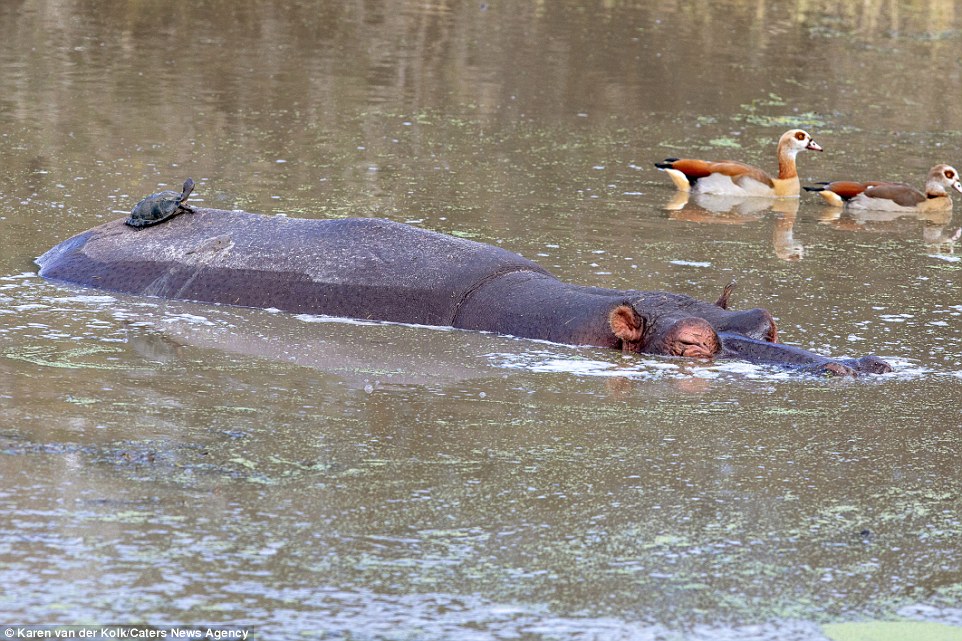 It started with just one turtle. The photographer explained: ‘A hippo was relaxing in the water. When we arrived one terrapin was sunbathing on the back of the hippo but it quickly led to dozens. They climbed up, sometimes falling back into the water’ Then there were four, plus a cheeky bird… they clearly don’t care that hippos have been known to bite wooden canoes in half and tip small boats over 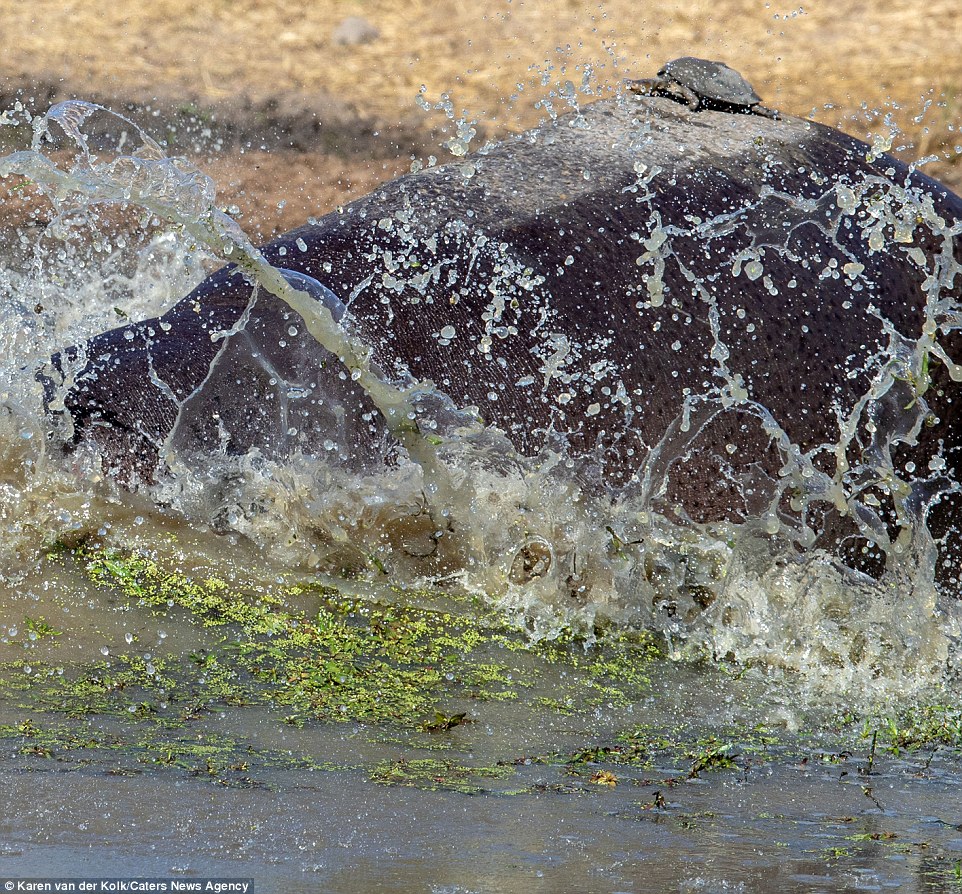 ‘He had enough when he got out of the water and tried to shake them off, and took a dive. It made me smile as it was funny to watch,’ said Karen van der Kolk Stubborn: somehow, despite all the shaking and diving, several terrapins managed to cling on to their moving ‘rock’ as he clambered back onto land

By DEBBIE WHITE FOR MAILONLINE

Now that’s a snarl-up! Car caught in awkward traffic jam between elephant and pride of lions on South African safari