When it comes to the World Cup, German footballers have never been beaten in a penalty shootout.

Either as West Germany or Germany, the nation has won every shootout they’ve been involved in on the biggest stage in football, so just what can be done to stop this spot-kicking juggernaut?

We’ve analysed every single penalty they have taken in World Cup shoot-out history to find out how they do so well – and where their opponents have gone wrong. The statistics suggest that Germany’s reputation as masters of the shootout is entirely justified.

They have won every penalty shootout they have ever played at a World Cup and they’ve only ever failed to convert one kick in all of that time. 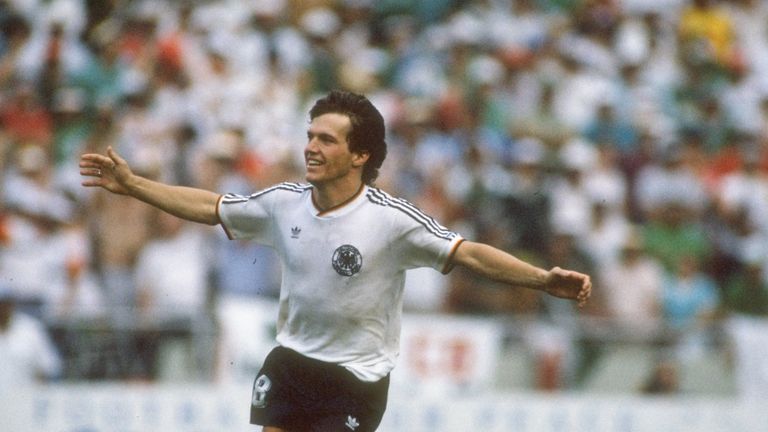 Since that moment, German players have scored 15 consecutive penalties taken in shootouts at World Cups.

Opposing goalkeepers have dived the right way for nine of the 18 penalties, but Ettori was the only one to make a save or indeed to even touch the ball. 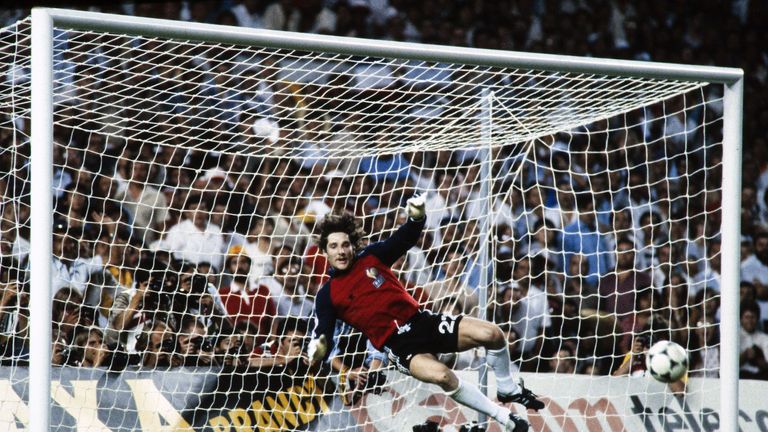 Remarkably, opposition goalkeepers haven’t even got a touch on any of the other 17 penalties despite diving the right way 50 per cent of the time.

For example, England’s Peter Shilton went the right way every time in 1990 but his tactic of waiting until he knew the direction of the kick yielded no reward. German goalkeepers: Ahead of the game 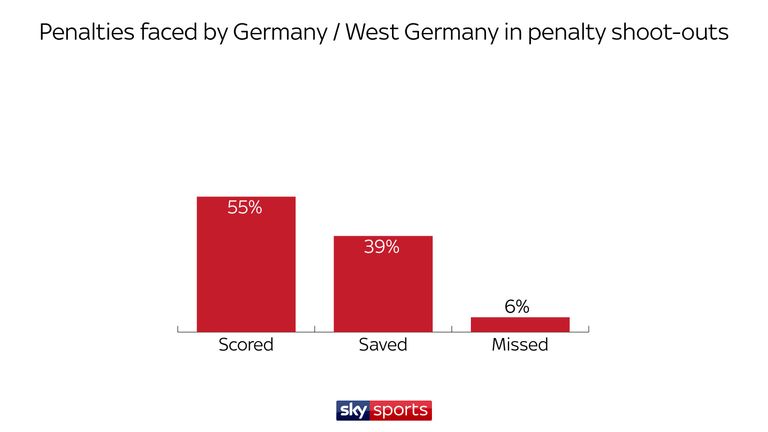 Germany has taken 18 penalties in World Cup shoot-outs and their goalkeepers have also faced 18 penalties.

And while they have scored 17 out of 18, they have only conceded 10 of the 18 taken against them.

England’s Chris Waddle famously blasted over the bar to settle the 1990 semi-final, but every other penalty Germany have faced has been on target.

That means German goalkeepers have saved seven of the 18 penalties they have faced – an astonishing saving record of 39 per cent.

That’s quite some feat when you consider only 26 per cent of penalties were saved in the Premier League last season. 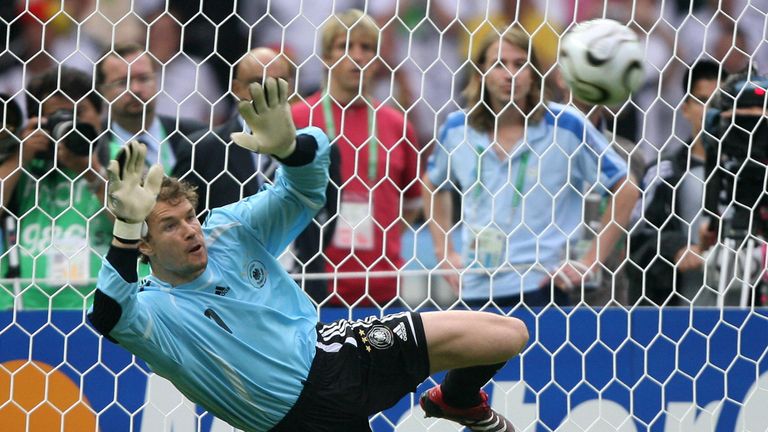 How do Germans take penalties? 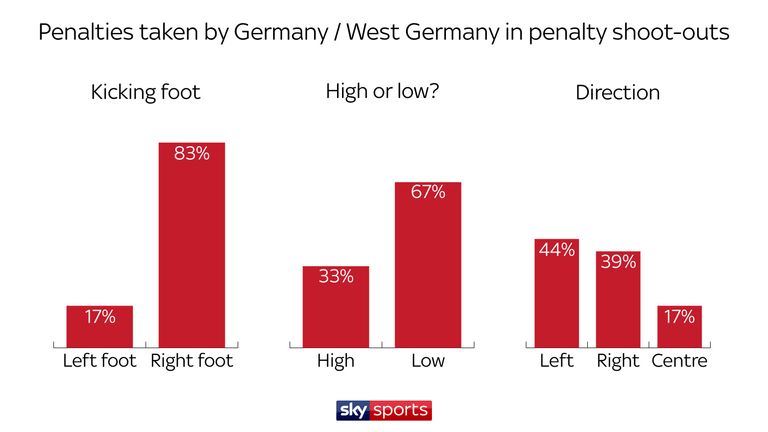 Of the 18 penalties taken by German players, 15 were taken right-footed. All three of their left-footed penalties were scored.

Six of those penalties were struck high, including the only failure. Whenever they have kept a shot low at the World Cup they have scored. The only failure by Stielke was struck to the goalkeeper’s right but was not near the corner and was saved.

What sort of penalties have Germany faced? Of the 18 penalties taken against Germany, 14 were with the right foot and four with the left.

Only one of the four left-footed strikes resulted in a goal, meaning that statistically, the success rate is just 25 per cent if you let a left-footed player take a penalty.

That increases to 65 per cent for right-footed kickers. Five of 14 right-footed efforts have been saved by German goalkeepers.

In terms of height, 12 of the efforts were struck low with six of them (50 per cent) being saved. Six shots were struck high with only one save and one going over the bar.

That means that 50 per cent of low penalties against Germany result in goals, in contrast to 66 per cent of penalties kicked high. 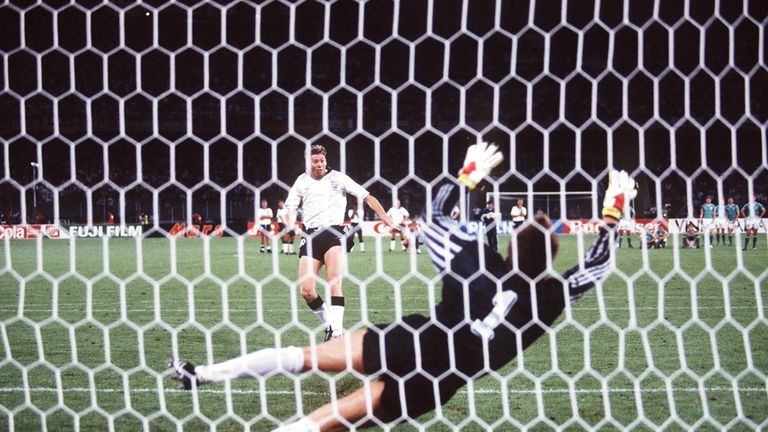 While Germans have a variety of styles, opposition players have tended to shoot to the goalkeeper’s right. Half of the penalties have gone in that direction with only five resulting in goals (55 per cent).

Three of the five kicked to the goalkeeper’s left were scored (60 per cent), while two of the four kicked down the middle were saved (50 per cent) – suggesting that is not a wise option. However, a German goalkeeper has only dived left five times and only two of those dives resulted in saves suggesting that might be the best route to success.

Germany has only ever lost one penalty-shoot-out in a major tournament – against Czechoslovakia in the final of the 1976 European Championships. They have won all six they’ve contested since then.

With the Czechs leading 4-3 on penalties after a 2-2 draw Uli Hoeness – now the president of Bayern Munich – sent his kick over the bar. Their opponents then claimed the trophy when Antonin Panenka scored with the outrageous chipped penalty that has been named after him ever since.

After being humbled by the Panenka, Germans have only missed a total of four of the 30 penalties taken in major tournaments – though three of those failures came in their most recent shootout.

In what has been described as one of the lowest-quality penalty shoot-outs of all time, Germany and Italy needed 18 kicks to settle their Euro 2016 quarter-final. Italy failed with four efforts, while Germany incredibly failed to convert three penalties – more than in their other six major tournament shootouts combined.

Thomas Muller became the first German to fail in a penalty shoot-out for 34 years when his kick was saved by Gianluigi Buffon, while Mesut Ozil became the only second German to miss the target when he struck the post. Bastian Schweinsteiger became the third when he shot over the bar moments later.

So how do you beat Germany in a World Cup shootout? Winning the toss and shooting first could be crucial. German sides have never missed a penalty when they’ve kicked first.

All of their major tournament misses have come in shoot-outs where their opponents have taken the first penalty. However, this summer’s tournament may be different due to the use of the new ABBA format.

The biggest problem is stopping their efforts from going in. Of the 37 penalties they’ve taken in major tournament shoot-outs, the goalkeeper has only touched the ball twice – and on both occasions, saves were made.

If your goalkeeper can get anywhere near it, he’s got a decent chance of keeping it out, but German players kick in all directions, so keepers can’t favour one side and must dive in a variety of directions.

According to the data, the best way of beating a German goalkeeper in a World Cup penalty-shoot-out is to do the following:

Kick with your right foot and aim high to the goalkeeper’s left.

Ultimately though, it’s probably easier just to beat them in normal time…

Lakes in and around Munich

5 Enchanted Places in Germany Straight out of Fairytales

Royal for a Day: Germany’s Palaces and Castles Are Fit for a Queen