Back in 2019, Germany wowed the world with the construction of what would soon be known as the world’s tallest sandcastle. A feat that’s not often seen outside of creative beach-goers during the summer, crafting an architectural masterpiece such as this actually takes a significant amount of time, patience, and know-how. It’s one thing to take in the sights of a beautiful beach, but a sandcastle in the foreground just makes the experiences even better.

Everything, from the conditions and density of the sand to the area and stability of the foundation, can be factors when it comes to the difference between a brilliant sandcastle or a pile of mud. Anyone who has attempted a sand-based structure knows that it’s a constant battle between ocean water (unless you’re at a lakeside beach) and sandy grit, but don’t let frustration get the best of you – this summer, take some tips from the pros and try your hand at a sandy wonderland. There’s no guarantee it’ll be nearly 18 meters tall, but it’ll be rewarding nonetheless! 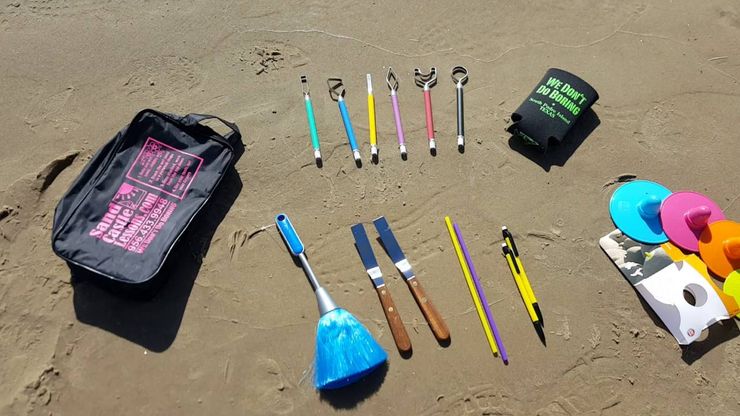 Having a solid arsenal of building tools is the first step to building any type of structurally-secure sandcastle. It might seem silly, but the better and more versatile the tools, the more detail a sandcastle can have. The basics consist of buckets, PVC pipes, a straw, a shovel, a trowel, and a spray bottle.

For extra creativity, things such as a melon baller, a cake decorating kit (or tools from one, such as palette knives, offset spatulas, and even decorating tips), and make-up brushes or paintbrushes are also helpful. These will help to add texture and dimension to the structure which is what takes it from a plastic-bucket-sandcastle to a work of art worthy of international competition.

Location And Method Are Important

This is more important than many people realize. While the spot you put your towel down on might be the perfect location to catch some rays, it could also be the reason why a sandcastle’s foundation fails. It’s imperative to pick a spot that’s above high tide so that all your hard work won’t be swept away, but also a spot that’s close enough to the water to not become a hassle when it’s time for a refill.

Additionally, the finer the sand, the better the structure will be – so finding a spot that has relatively untouched sand, free of shells and rocks, is preferable.

Once a good spot has been picked out and it’s confirmed that sand will pack easily (try doing a test-run with a spray bottle for some extra moisture), it’s time to rock and roll. Start out with a basic structure and practice – Rome wasn’t built in a day and while many sandcastles are, it’s best to save the big stuff for when the basics have been perfected.

Once a basic structure has been built, things such as windows, ledges, and architectural intricacies can be added. Narrow tools such as palette knives or clay tools can be used to scoop out windows, but be sure not to get too ambitious with their size. Working from the top down is the way to do this, as taking out too much from the bottom could infringe on the structure’s stability.

To make things such as window ledges and turrets, use sand that’s the consistency of mud. Make these separate from the structure by piling this mixture on the ground, compressing it with your hands, and cutting out bits, then shaping it into their final form. Allow to dry just a bit, then spray and attach to the actual sandcastle. Pro tip: While building, especially in the sun, be sure to spritz your sandcastle every now and then in order to maintain the form.