Nearly two months ago, Pretty Boy, an elephant, found himself in quite a bit of trouble – but he knew exactly how and where to get help.

In June, Pretty Boy, who lives and roams around Mana Pools National Park in Zimbabwe, had been s.h.o.t in the head and then walked around with his wounds for several weeks. There was a prominent hole where the bullet had entered. 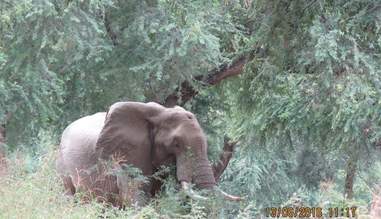 When veterinarians from the Animal and Wildlife Area Research and Rehabilitation Trust (AWARE), a wildlife conservation organization, heard the news, a team immediately went out to track down the elephant in order to give him the medical assistance he needed. 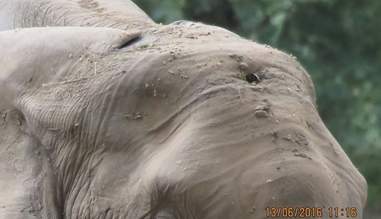 However, the AWARE team didn’t have to do much searching at all. 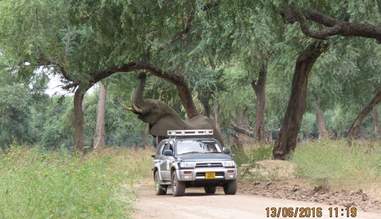 “He made himself available for examination within half an hour, coming right up to their car,” AWARE wrote on Facebook. 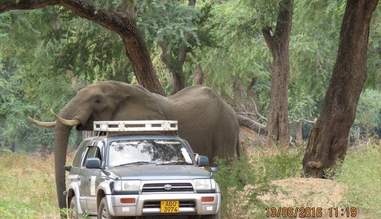 Pretty Boy happened to be an incredibly gentle and relaxed elephant, allowing veterinarians to tranquilize him, examine him and patch him up before sending him on his way. 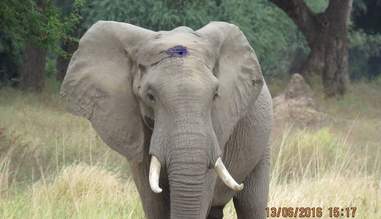 Even the morning after his surgery, Dr. Lisa Marabini, director of AWARE, and others were still amazed that they were able to get so close to Pretty Boy without him showing any signs of aggression – describing him as a “perfect gentleman.”

He’s been doing more than well ever since and getting up to the same antics that saved his life in the first place.

Pretty Boy, who stands out from the herd with his sloping back, was seen recently by Moira Whitaker, a local, during a visit to Mana Pools. 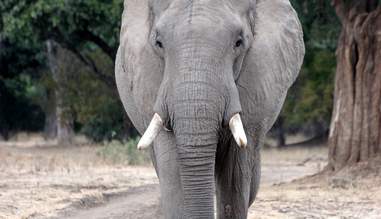 Despite the harm inflicted upon him by humans in the past, Pretty Boy continued to prove that he’s unafraid of people – and on some level, doesn’t even mind mingling with them. 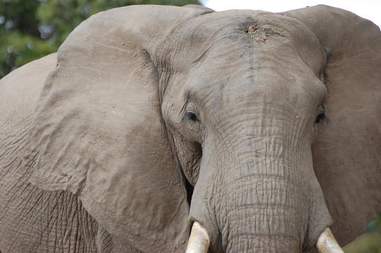 “Pretty Boy was browsing at a tree close to the road,” Whitaker told The Dodo. “As we always do when we approach an elephant, we stopped a distance away to watch him. He looked at us and started ambling down the road toward us. Although he looked perfectly happy and relaxed, we reversed to give him space to go to the next tree.”

Instead, Pretty Boy moved past the tree and continued to walk toward Whitaker and her husband. “We got the feeling that he wanted to walk up to us, but as we didn’t know his nature we reversed again,” she said. “He eventually stopped to eat right near our car and we were able to watch him for a long time before we continued with our game drive. He was completely relaxed at all times.” 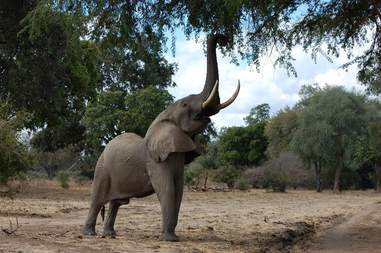 Whitaker’s close encounter with Pretty Boy matches the same amazingly gentle demeanor he exhibited to the veterinarians who rescued him months ago.

“I never usually feel totally comfortable getting very close to a wild elephant,” Marabini told The Dodo at the time. “But he literally emanated serenity. There were no aggressive vibes coming from him whatsoever.” 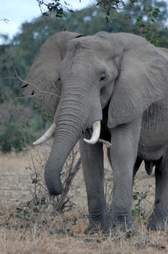