It might be hard to drag yourself away from Geneva’s ritzy lakefront, knockout Mont Blanc views and rainbow-kissed Jet d’Eau fountain, but you’ll be glad you did – trust us. This sophisticated polyglot of a Swiss city is but a day trip away from vineyards, Alpine peaks, medieval castles and towns with cultural cachet. And given that Switzerland has truly nailed slow travel, most places can be reached by boat, rail or cable car. Here we bring you eight of Geneva’s best day trips.

For dress-circle views of Geneva and Lac Léman to the Alps beyond, make the quick hop over the French border to 1379m Mont Salève, where a cable car hauls you to the summit in minutes. On cloudless days, the view reaches all the way to the Jura Mountains and pearl-white Mont Blanc massif. In summer, there’s lots of action at the top, with hiking, climbing and paragliding, while winter attracts sledders and cross-country skiers. 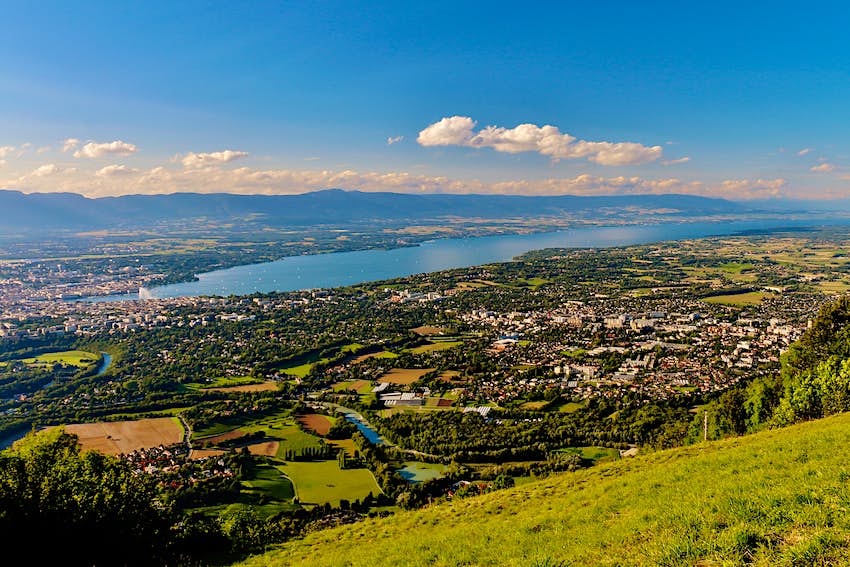 Watch this space: the cable car is set to relaunch in 2022 with a new panoramic restaurant, museum, botanical garden and climbing wall.

How to reach Mont Salève: It’s a 20-minute drive east to Etrembières, where the cable car rises to Mont Salève. Alternatively, take bus 8 from Gare Cornavin to Veyrier-Douane, a 10-minute walk from the cable car base station.

A medieval castle to trump them all, Château de Chillon makes people gasp out loud with its riot of towers and turrets, and ravishing backdrop lifting the gaze from the lake to the oft-snow-encrusted Alps. If the scene looks like a painting, it is: Turner committed it to canvas back in 1836, and Gustave Courbet did likewise in 1874. 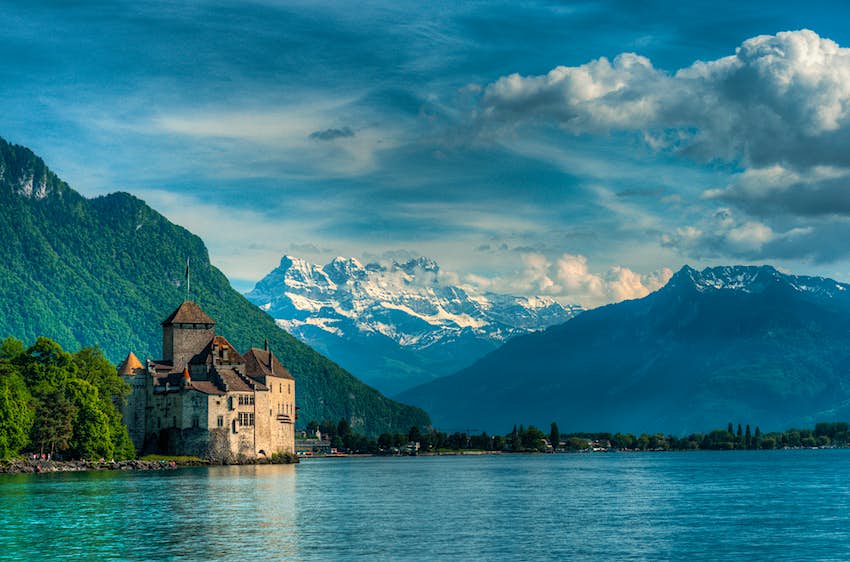 And they weren’t the only ones smitten with its romance: Lord Byron penned The Prisoner of Chillon, a poem recounting the fate of François Bonivard, incarcerated here for his seditious ideas and freed by Bernese forces in 1536. Highlights of a visit include the frescoed Chapelle St Georges and the Gothic dungeons.

When you tire of the crowds, take time out in nearby Carouge. Though it’s just a 10-minute tram ride from Geneva, this village-within-a-city moves to its own laid-back, bohemian beat. Architecturally Carouge is a one-off, too, with plane tree-lined lanes and pastel-painted, shuttered houses overlooking courtyard gardens. It bears the 18th-century hallmark of Vittorio Amedeo III, king of Sardinia and duke of Savoy, who had grand plans to rival Geneva as a center of commerce. 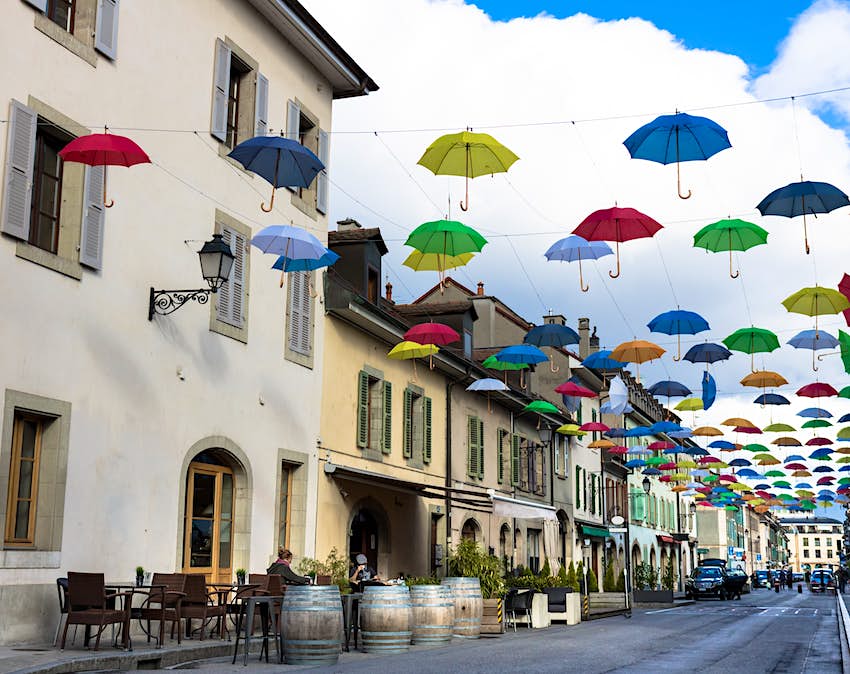 Carouge brims with appealing bars, boutiques, artists’ workshops and bistros, some of which spill out onto the pavement when the sun’s out. You’ll also find the Musée de Carouge, zooming in on the neighborhood’s 19th-century glory days. Stop for lunch at Café du Marché on the main square, then return at night for tapas, jam sessions and DJ sets at the artsy Chat Noir.

How to reach Carouge: Trams 15 and 18 connect Geneva’s Gare Cornavin to Carouge in just 10 minutes.

If you’re culturally minded, you won’t be able to resist the siren call of Lausanne, whose medieval historic center, crowned by the weighty Gothic Cathédrale de Notre Dame, tumbles down to the lake in a maze of steep lanes and gardens. Lausanne’s sizeable student population gives it verve and more of a party scene than many a Swiss city. Factor in at least a day – if not a weekend – to do the city and its staggering location on the lake justice. 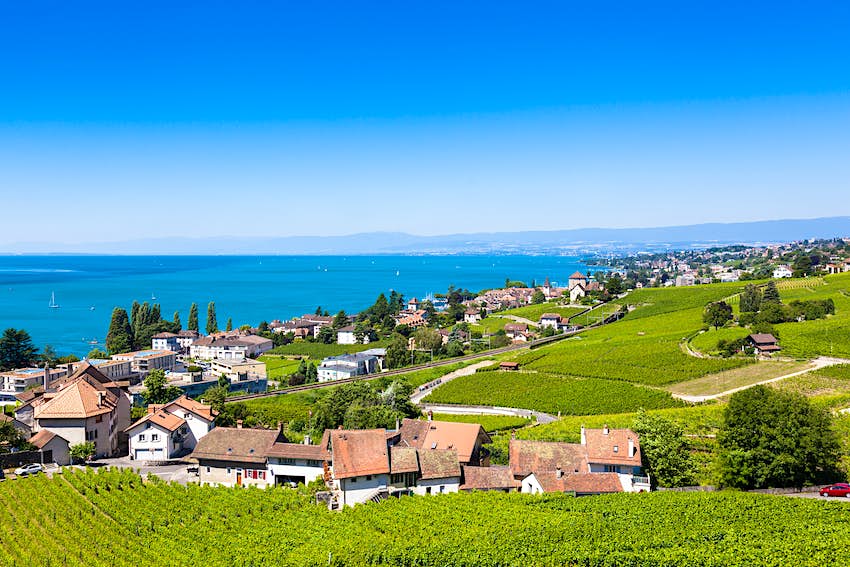 Lausanne’s star has risen more than ever recently with the opening of PLATEFORME 10, a thrilling new arts district in born-again train sheds, bringing together the city’s three flagship museums. For more post-industrial cool, nose around the Flon district, where cafes, bars, boutiques and galleries reignite former warehouses. Try Eat Me for global tapas and cocktails, and ever-so-eccentric Le Perroquet for brunch or a G&T.

How to reach Lausanne: Regular trains zip along the lakeshore from Geneva to Lausanne (40 minutes), or it’s a 50-minute drive via the A1.

Reclining serenely on the lakeshore, midway between Geneva and Lausanne, petite-and-pretty Nyon punches above its weight culturally, with a nautically themed museum, the ruins of a Roman basilica, and not one but three chateaux. Its 12th-century crowning glory is the whimsically turreted Château de Nyon, looking every inch the fairy-tale dream, where you can take a romp around the town’s historical museum, admire ringside views of the lake from the terrace, and taste red and white wines from the surrounding vineyards in its brick-vaulted basement Le Caveau de Nyon. Venture slightly out of town to reach the 18th-century mansion Château de Prangins for more historic exhibits and walks in glorious French-style gardens. 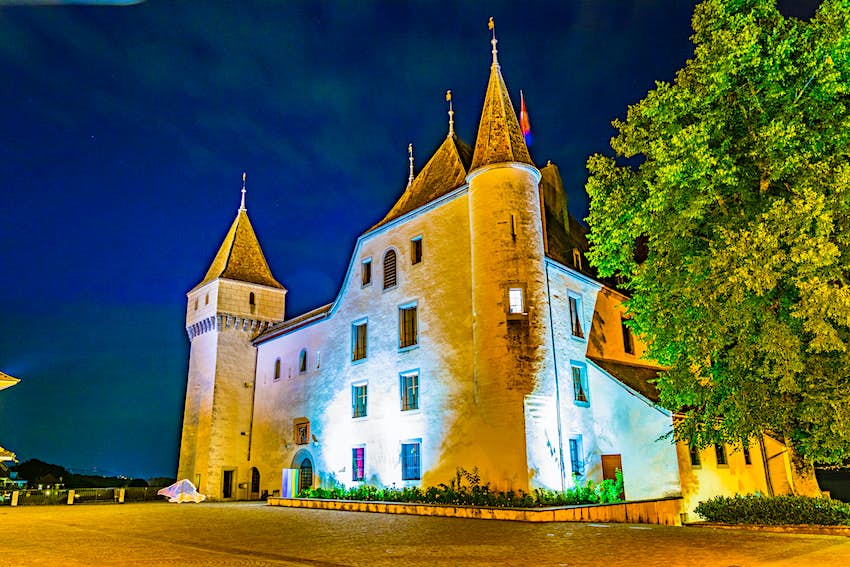 Nyon really comes into its own in summer with its lakefront lido, alfresco dining at La Plage de Nyon (try the lake perch), and proper Italian gelato at Gelateria Venezia. In July, the town rocks at Paléo, Switzerland’s biggest outdoor international music festival.

How to reach Nyon: Very frequent trains connect Geneva to Nyon (15 minutes) or it’s a 30-minute drive north along the lake via the A1.

With an uplifting panorama of lake and mountain, flower-rimmed shores for a promenade, a microclimate so mild that palm trees flourish, and belle époque hotels that wing you back to a more graceful era of travel, Montreux is an instant heart-stealer. Romantics from Lord Byron to the Shelleys have eulogized its views. And if you’re going to fall hard for one town on the lake, this will most likely be it. 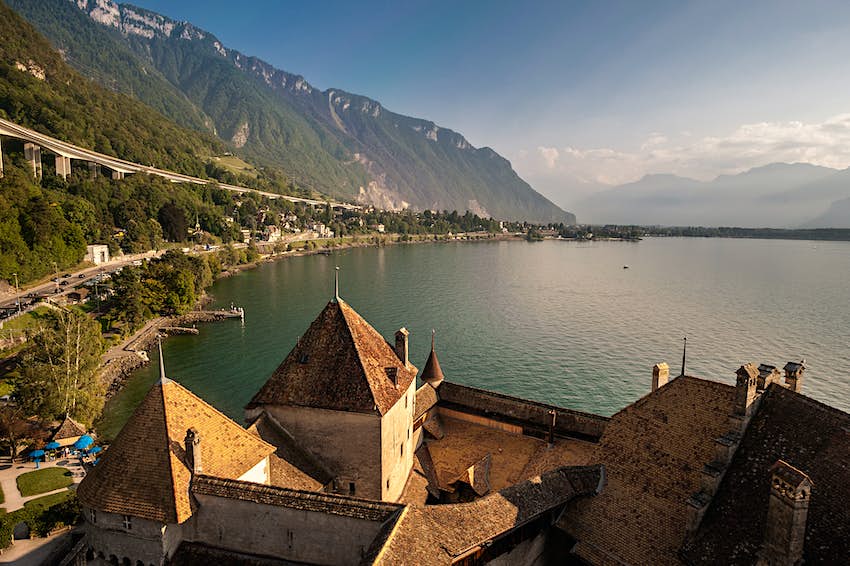 To enjoy the view from above, take the cogwheel train up to the 2042m peak of Rochers de Naye, surveying Lake Geneva and the Alps from on high.

If jazz rocks your boat, you’ll have surely heard of the summer Montreux Jazz Festival. Many a legend recorded albums at the Mountain Studios in Montreux Casino over the years, among them Freddie Mercury, to whom a statue and Queen: The Studio Experience are devoted.

How to reach Montreux: At the eastern tip of croissant-shaped Lac Léman, Montreux is an hour’s drive or train ride from Geneva.

Rising north of Lausanne, the World Heritage-listed Lavaux vineyards are ridiculously lovely. Diving down to Lake Geneva, the gravity-defying slopes are intricately scaled with terrace after terrace, vine after vine, dry-stone wall after dry-stone wall. If this is the first you’ve heard of them, it’s because the wines here are so select and small-scale that many of them never leave Switzerland (lucky Swiss). 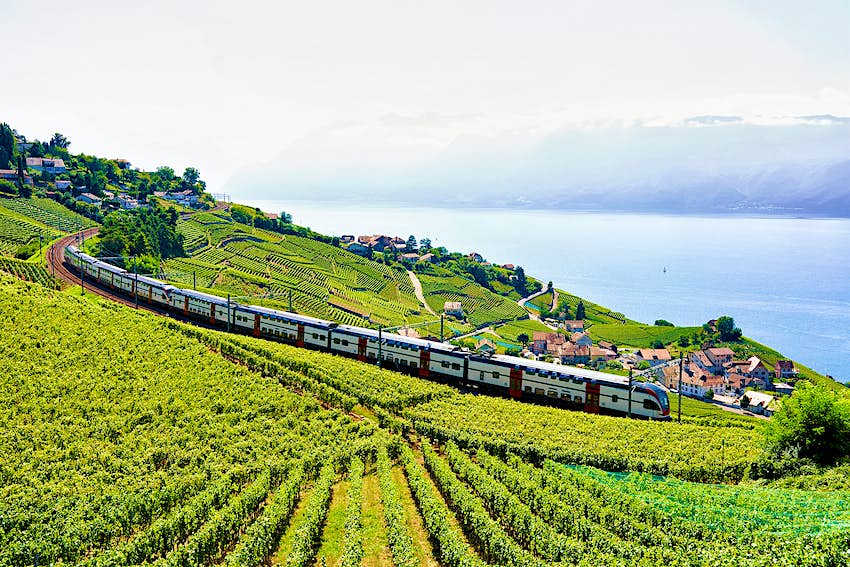 For the full-on Lavaux experience, allow time for a walk and wine tasting at local caveaux (cellars). A great springboard for the area is the adorable medieval village of Lutry. Here you can strike out on the 5.5km Grandvaux trail, stitching together vine and hamlet, before a petite dégustation (tasting) at the Domaine du Daley, the region’s oldest wine-producing estate, going strong since 1392.

How to reach the Lavaux: Trains run at least twice hourly to Lutry (one hour). Or it’s a 50-minute drive east of Geneva via the A1 if you’re driving.

Sitting smugly on Lake Geneva’s northern shores, with an alley-woven center and views rippling across glass-blue water to the Alps, Vevey is the kind of town that makes you want to crack open a bottle of something special. And the terraced vineyards that tear up the surrounding slopes make sure there’s plenty of that. Pairing with excellent wines like crisp, flinty Chasselas whites, there’s sensational cuisine, as noted by the giant fork sculpture protruding from the lake and the food-focused Alimentarium, with its museum and cookery workshops. 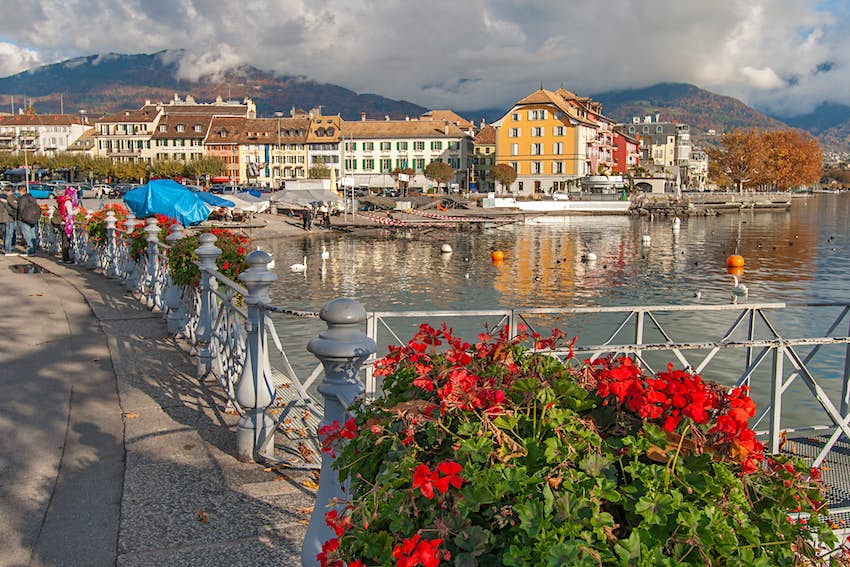 The town has certainly done its bit to put the region on the global gastro map, shining with a total of five Michelin stars and offering plenty of opportunity for saying to hell with the budget. For molecular wizardry and 20-course tasting menus, aim to score a table at the rather fabulous Denis Martin.

How to reach Vevey: Vevey is an hour’s train ride or drive east of Geneva. It’s a beautiful journey skimming the shores of the lake.

The Most Luxurious Hotels in Switzerland

Best Things To Do In Leukerbad, Switzerland: Alps & Thermal Springs

7 Of The Most Picturesque Train Trips In The World