Australia’s Great Ocean Road clings to dramatic clifftops like a twisting serpent. Drivers round corners for incredible views of vast blue seas and gigantic rock formations chiseled by nature. No wonder this famous drive is a bucket list item for travelers.

Geelong (population 253,269) is Victoria’s second-largest city and the gateway to the Great Ocean Road. Though in 2009, a Freeway Extension (M1) deprived tourists of a drive through this fantastic city.

My suggestion is to detour for a waterside lunch stop or a few days’ stay, as Geelong is ripe with attractions

1. A UNESCO City Of Design

Geelong was globally recognized as a UNESCO City of Design in 2017, joining a network of cities such as Dubai, Singapore, Berlin, Beijing, and Detroit.

Geelong shares another link with Detroit, where Henry Ford founded The Ford Motor Company in 1903: Ford Motors chose Geelong as the site for its Australian headquarters in 1925.

During the Great Depression, Lewis (Lew) Bandt, a 22-year-old Ford Australia designer, read a letter from a farmer’s wife, “My husband and I can’t afford a car and a truck. But we need a car to go to church on Sunday and a truck to take the pigs to market on Monday. Can you help?” Bandt designed the ute, paving the way for the pickup, now one of the world’s best-selling vehicles.

Geelong, with its Ford factory, cement works, dockyards, and railway yards, was an industrial city. But just as Detroit is famous for the deindustrialization of its urban core, Geelong has morphed into a “post-industrial city” where design remains paramount. 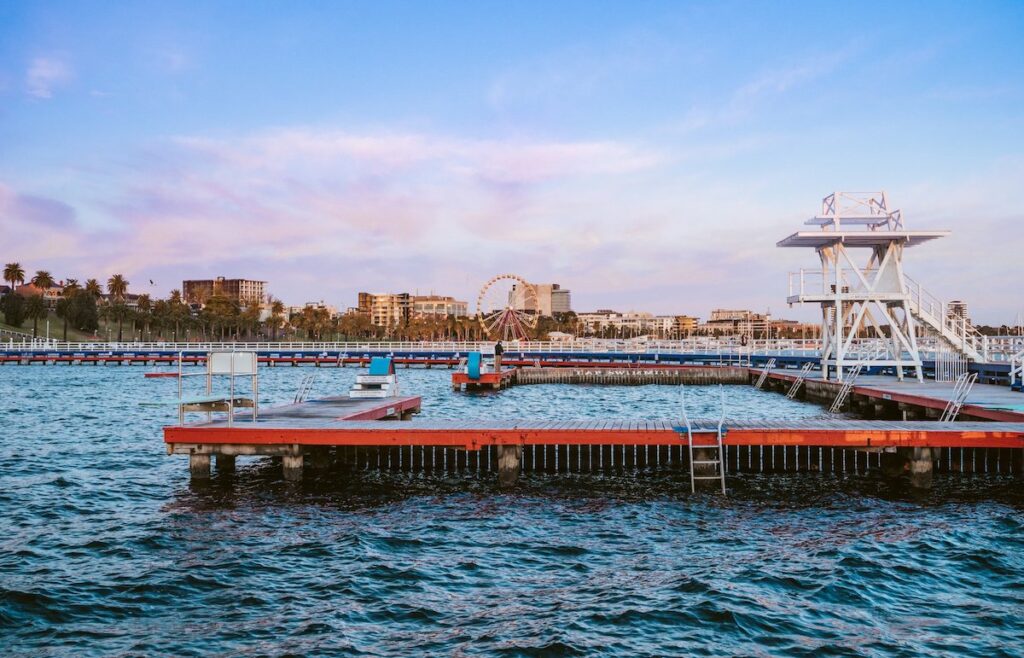 Before the 1990s, Geelong’s waterfront was an industrial wasteland. Today, it’s one of Australia’s top waterfronts with multiple awards for design.

Families can relax at the waterside Steampacket Gardens, which has green lawns for picnics and towering palm trees that frame the Geelong Ferris Wheel — one of the biggest in the Southern Hemisphere.

There are many excellent fish and chip restaurants and picnic spots. Ride a trackless train along the foreshore. Hover over Corio Bay in a helicopter or extend the trip over the Great Ocean Road and the 12 Apostles.

A UNESCO delegate described artist Jan Mitchell’s painted bollards as inspirational. Mitchell carved and painted pylons from a disused pier, turning them into 104 whimsical characters drawn from Geelong’s past. Take selfies with crusty old sea captains, lifeguards, and 1930 bathing beauties on the 2-mile bollards trail. The Rifle Band and others come alive with an Augmented Reality App. Note the rabbits. Mitchell references Lord of the manor, Thomas Austin, who imported 24 rabbits from England in 1859 for his hunting pleasure. What could possibly go wrong? By the 1920s, a plague of over 10 billion had eaten two million acres of Victoria’s pastures and was munching its way to Queensland.

Geelong’s Botanic Gardens, established in 1851, are Victoria’s oldest botanic gardens. The English landscaping means lush lawns and clipped garden beds. But as design is paramount, a 21st Century Garden blends native garden beds with dramatic design. It contains lots of specimens of Australian trees, such as the boab, which has a trunk that fills with water until it resembles a bottle. Tours of the gardens and self-guided heritage tree walks are available.

Pro Tip: The garden is on the headland. The walk down offers superlative bay views. 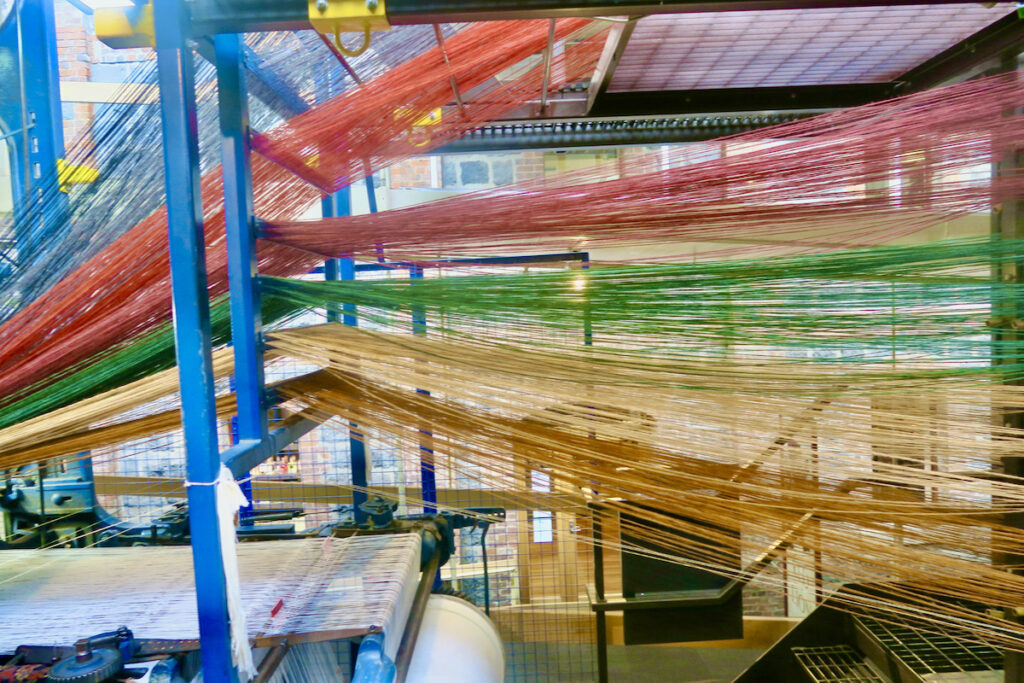 Australia “rode on the sheep’s back” as wool was a major export in colonial days. Geelong’s position on Corio Bay on the cusp of the Western pastoral district made it perfect for the wool trade and major textile industries. The National Wool Museum is in an 1872 bluestone wool store near the waterfront. This museum explores the terrain “From the sheep’s back to the clothing rack,” offering insights into life on the land, how wool mills operated, and wool’s place in fashion and handcraft. The gift shop sells fashion knitwear and Manor House rugs woven on-site on traditional machinery. The Black Sheep is an in-house restaurant and gin bar. 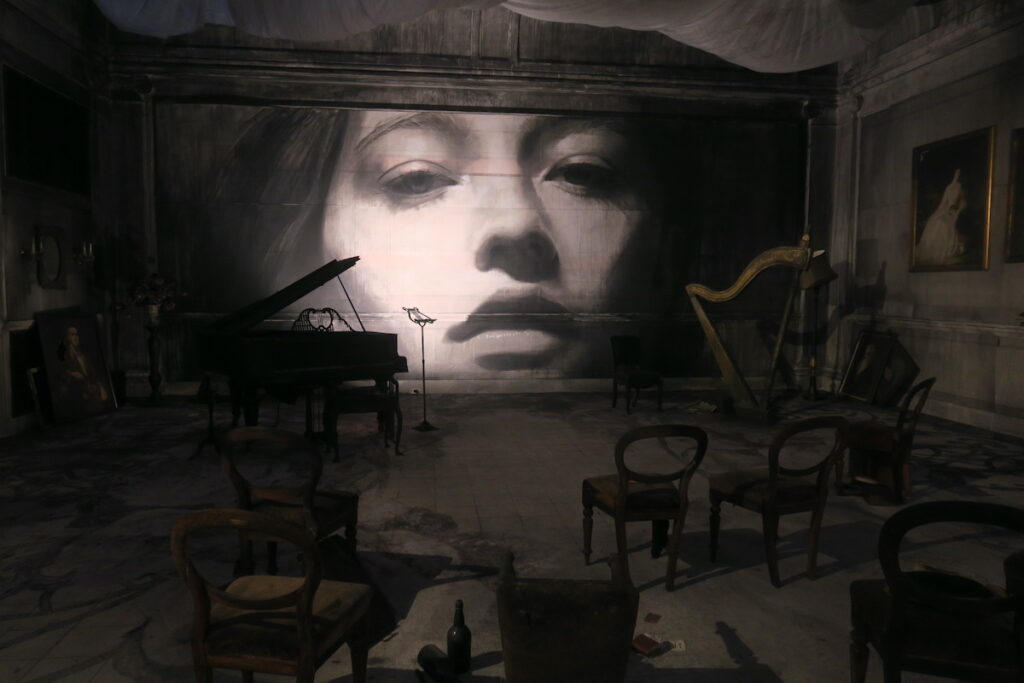 The Geelong Gallery is one of Australia’s oldest regional galleries with a magnificent collection of 19th and 20th century Australian and European paintings. The 1915 architecture is a temple to the arts with Greco-Roman columns and high ceilings. In contrast to the building’s classical roots, exhibitions are often cutting edge. They recently had a Rone retrospective, highlighting the work of a local street artist who has become world-renowned for his large-scale wall paintings of esoteric female faces and immersive installations exploring beauty and decay.

Geelong Library and Heritage Centre tower over the gallery. The glass-clad masterpiece nicknamed “the Dome” cost $45 million and has won several architectural awards. An elevator goes to the top floor. Step out on the balcony with the pigeons, and Geelong is at your feet! Enjoy lunch at Public, a contemporary library cafe with views of the parklands.

Melbourne is famous for its laneway culture, and Geelong, its little sister, is emulating this attraction. Little Malop Street and surrounding alleyways are car-free and offer alfresco dining and a street art vibe. Imbibe at the 18th Amendment Bar, a Chicago-style speakeasy, chow down on Nashville-style hot chicken at the Hot Chicken Project, or dip in the spoon at Twisted Dessert Bar. Celebrate Geelong’s wines at Geelong Cellar Door over charcuterie platters. The Geelong area has 40 vineyards and cellar doors and is becoming a premier wine region.

Shop in Pakington Street (“Pako” to the locals). You’ll find lots of creative gift shops, fashion, and jewelry. The long stretch is great for a wander. Try brunch at King of the Castle — “food fit for a king.” Two Sugars made my night with its fresh, authentic Italian cuisine. Not far away, Boom Gallery is in an old wool mill, a cavernous space showcasing massive colorful paintings. They also stock handmade jewelry and ceramics and serve great coffee.

Pro Tip: Geelong is mostly walkable. Should you need a cab, they only cost a few dollars. 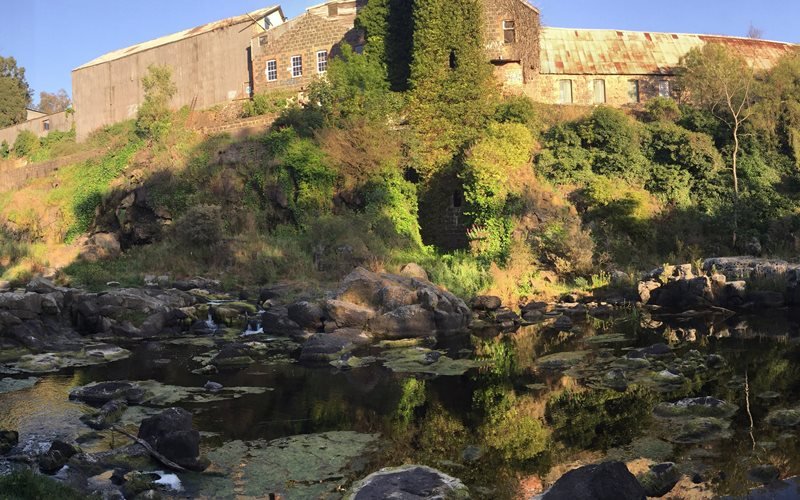 Hubcaps To Creative Hubs is the title for a series of short films about creative Geelong. Hubcaps are a reminder of Ford as a major employer before pulling out in 2016. Vacant industrial spaces such as factories and wool mills have become creative villages.

I stayed in a Vrbo in the Old Paper Mills (1878). In Victorian times, this bluestone mill pulped rags to make paper. The dramatic waterfall setting reminded me of the cover of George Eliot’s novel The Mill and the Floss. The present owner, Alex Robins, has lovingly restored what he refers to as an Industrial Cathedral. The old mill is a labyrinth of galleries, studios, workshops, and boutique shops with handmade goods. Enjoy a coffee at The Door Gallery Cafe surrounded by antique Indian doors. Provenance Wines has a cellar door and restaurant in the main building. Enjoy tastings matched with bite-sized food pairings. Rone painted one of his famous esoteric faces on the back wall. As street art is so transient, it’s great to see a lasting testament to his work. 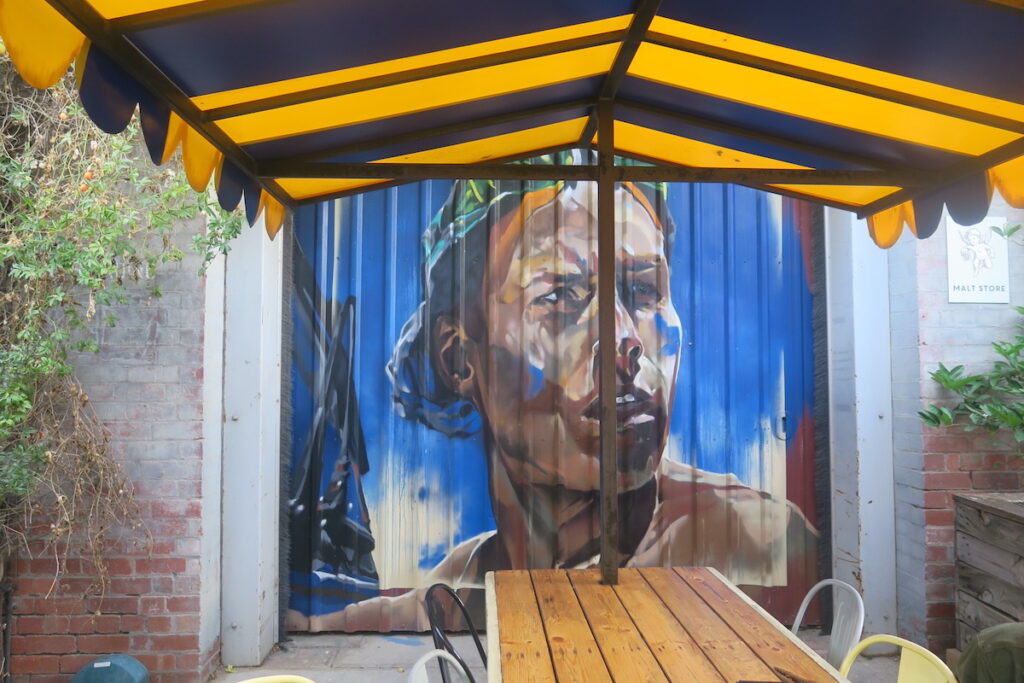 Little Creatures Brewing started with a group of mates who wanted to brew an awesome, hop-driven American Pale Ale like they’d experienced in the US. Their thriving company based in Perth took over Geelong’s Valley Worsted Mills as their main brewery site for the Eastern States in 2000. The 1924 Art Deco mill features red Geelong brick, white trimmings, and a sawtooth roofline. Though the site is enormous, there are many intimate corners for a quiet drink or meal, including a vibrant cantina featuring street art. Many young families have moved to Geelong, so it was great to see a family-friendly brewery with a sandpit for the kids.

The Federal Woollen Mill (1915) is a Geelong icon that played an essential role in producing army uniforms and blankets for Australian soldiers during the First World War. Now, it’s a dynamic tech and innovation hub with coding firms and start-ups. The place buzzes. The cavernous Geelong Vintage Markets are in the old Pilkington Glass factory as you drive in. You swear you won’t buy anything until the memories come flooding back. Early Australiana: they’ve got it. That toy you loved as a child. Or the long-lost lid for a favorite piece of Tupperware. The Popcultcha Collector Gallery is full of superheroes, statues, action figurines, comics, and fine art prints. Anther Gin has just moved in. They use Australian botanicals such as lemon-scented gum, river peppermint and offer tastings and flights of gin cocktails. One of Geelong’s favorite cafes, The Pickers Union, is on-site.

A little further down Mackay Street is the abandoned Powerhouse, a derelict site with broken windows. When industries leave, street artists take over. The six-story-high walls and industrial staircases became a canvas for gigantic murals. The gate was open, so I drove in, but I guess I met the new owner as I was asked to leave. It’s still worth photographing this amazing building from the road. The street artists have moved on to a (disbanded) distillery in Corio, something to save up for before my next visit to Geelong.

11. Getting There And Accommodation 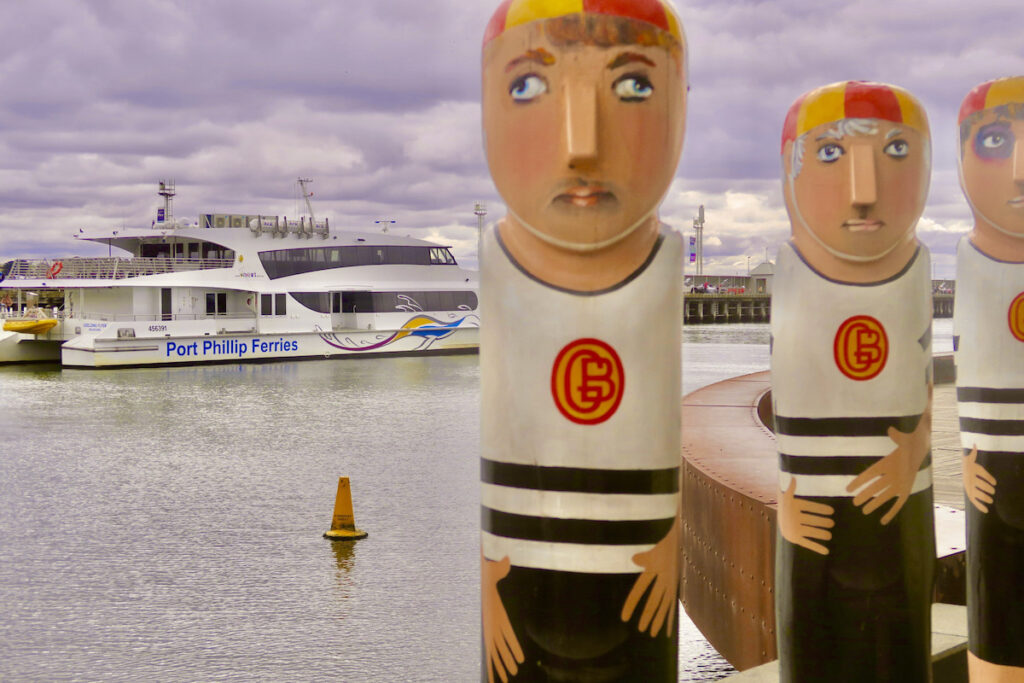 Trains depart Melbourne for Geelong every 10 to 20 minutes on trips of around an hour. If driving, Geelong is a 10-minute detour off the M1 and an hour from Melbourne. The multi-laned highway is monotonous and often starts with traffic snarls and is rife with trucks. Port Phillip Ferries depart from Melbourne’s Docklands and offer a quiet, reflective journey across the bay to Geelong’s Waterfront. Some of Geelong’s best accommodation is walkable from here. I’ve enjoyed stays at Hotel R (modern hotel suites overlaying an 1854 building) and Vue Apartments Geelong, which are colorful, streamlined, and contemporary. Ask for rooms overlooking the water.

Pro Tips: Tourists board coach tours from Melbourne to the Great Ocean Road that bypass Geelong. To experience this great city, begin such tours in Geelong such as chauffeur-driven Mustang tours, surfing tours, and others.

A Tour of Australia’s Greatest Mountains