There’s no city quite like Innsbruck in Austria with its mountainous walls, and this is the very first thing you will notice upon arrival. The proclaimed ‘Capital of the Alps’ is an urban basin filled with 800 years of history, defined by the peaks and alpine forest slopes that hug it.

Its dual city and mountain offering make it a unique city for visiting. From the altitude heights to the riverside landscapes and attractions below, here are the things to do in Innsbruck in and outside of its famed Old Town.

1. What to See in Innsbruck Old Town

Quite literally picture perfect, you can’t go wrong with any angle of the city. I first explored the history laced in the urban grounds below before heading up to various elevated viewpoints for an alternative angle on the city layout.

It’s quite the entrance into Innsbruck’s Historical Old Town. I started at the Triumphal Arch that faces the mountainous backdrop of the city. It was built in 1765, commissioned by Empress Maria Theresa to commemorate the marriage of her son, and now stands proudly on Maria-Theresien-Straße – the most navigable thoroughfare from which to enter the cobbled stoned streets and alleyways of late-Gothic architecture. The Historical Old Town is tiny but packed full of sights and traditional eateries (once you weave past all the souvenir stores). Here you can wander into the past by visiting the Hofburg Imperial Palace, the gothic Hofkirche (Royal Court Church), City Tower, and the glimmering Golden Roof with 2,657 fire-gilded copper tiles (which makes it quite the star attraction). Innsbruck’s old streets are a conveyor belt of gothic and baroque architecture styles and facades – Helbling Haus being one of the most exquisitely detailed and stand-out examples. You’ll find it on Herzog Friedrich Straße, next to the Golden Roof. 2. What to Eat in Innsbruck

No trip to Tirol is complete without re-fueling with a local dish such as the Tiroler Gröstl (potato and meat fry up, topped with an egg). What to eat in Innsbruck is easy, but choosing where to go from the vast choice available can be hard.

The two best traditional establishments include Weisses Rössl, the oldest restaurant in the city that dates back to 1509, or Stiftskeller, which is set within an old monastery. For those craving a strudel, see how long it takes you to choose one of the many sweet or savory options at the Strudel Café Kröll in the Old Town. It’s a rite of passage after all the historical wandering. I decided on chocolate and raspberry in a move away from my traditional apple choice. 3. Places to go in Innsbruck Nature

Get up to the Nordkette Mountain

What’s unique when you visit Innsbruck is that it is an accessible nature haven and cityscape all rolled into one, where cable cars to the city’s darling 2000m high Nordkette Mountain leave from the very heart of the city. In less than 20 minutes you can reach Austria’s biggest nature park, Karwendel, and Europe’s highest (Alpine) Zoo alongside various viewing platforms. The avant-garde design of the three main Nordkettenbahnen cable car stations combines Innsbruck nature trails with modern design without impacting on the visual elements of the landscape. Wander Along the Inn River

During both my visits to Innsbruck, I was always curiously drawn to the Inn River for a stroll, with its famous multi-colored townhouse views and green spaces as a backdrop. Modern trends intertwined with the preserved old is one of the exciting things to see in Innsbruck. The Downtown area adjacent to the Historical City Centre is where you’ll find everything from the 360° (panoramic) bar or Trobaun for its huge selection of world craft beers on tap and the more swanky hangouts like Erlkönig. Swap old cafes for hipster coffee shops like Max Standard and Crema and try to score a table in the busy burrito joint, Machete, which is a local favorite. A city that’s home to 30,000 students and a lot of young professionals, it has a vibrancy that compliments that within its centuries-old offerings.

A short distance in the opposite direction of the Old Town and the Nordkette range is the 50m high Bergisel Olympic Ski Jump Tower. It’s one of my favorite places to visit, both in keeping with the winter sport pastime Austria is known for and watching the ski jumpers, but also as a platform for one of the best views of Innsbruck.

On the short trek up to the entrance of the Innsbruck Ski Jump, I stopped at the Tirol Panorama Museum, where history is depicted with a modern approach via a giant 1,000 meter-squared panoramic painting. 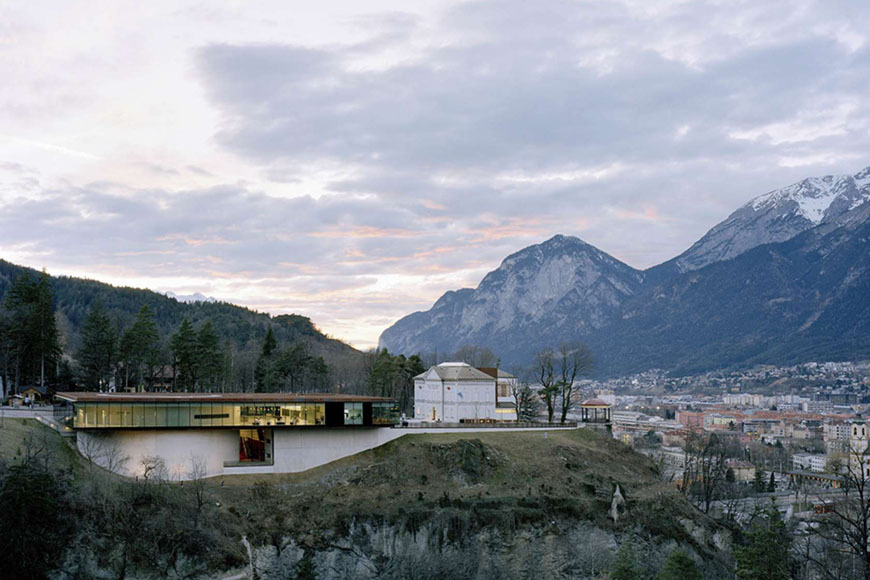 Arts and Festivals in Innsbruck

And with a state theatre and an opera, 30 museums, and art galleries, as well as a year-round timetable of festivals that take place in the old palace Historical Old Town grounds, Innsbruck is quite the pulsating modern town, considering its small size. 5. Things to Do in Innsbruck Outside of the City

Ambras Castle and Chambers of Art and Curiosities

Outside of the center of the city, you have further options for a historical or modern fix. I’m not one for tourist buses but the ‘Sightseer’ bus was surprisingly interesting, passing through Innsbruck’s outer neighborhoods and got me out to areas including the hillside where you will find Ambras Castle. This Renaissance castle built by Archduke Ferdinand during the 16th century and home to the Chambers of Art and Curiosities and all manner of weird and wonderful collections he built up. Many take the time to visit the famed Swarovski Crystal Worlds, which ranks as one of Austria’s most visited attractions. Bling and excessive in parts, the brand shows off its sparkling craftsmanship via exhibitions and art installations in its ‘Chambers of Wonder’ that includes a Crystal Dome and a crystal tree garden, upping the ante on the usual showroom model. Innsbruck urban landscape was craved out right in front of a dominating mountain range, giving it a unique makeup that cannot be found or replicated anywhere else in Austria.

Providing the best of the country’s great outdoors with a long history and trendy modernisation, you have it all in one place, without having to travel very far at all.