It may not be the largest Portuguese region (that’s the Alentejo), but the Centro de Portugal is the most diverse zone in the country. All it takes is a short one-hour drive or train ride to take you from wide, windswept beaches and energetic fishing towns (where it’s not uncommon to see fishermen chatting while cleaning their daily catches) to romantic castles, craggy mountains, remote villages of schist homes, and beautifully aged cities. Why stick to the capital when you could experience beauty, history, and culture without the crowds?

1. An incredible diversity of culture within close proximity

One weekend is all you need to experience each main corner of Portugal’s central region, and the train systems run through most of it (making it easily traversable, to boot). This means you can order fresh fish just off a boat in the morning, stare across a rugged mountain range in the evening, and enjoy breakfast from a flower-landscaped, palace terrace the next day. Portugal has been converting many abandoned castles and palaces into hotels.

Central Portugal is home to Nazaré, Peniche, and Figueira da Foz, three coastal towns with enormous beaches (sometimes you need to walk across the sand for five minutes or so before getting even close to the water). Cheerful rowboats and ominous stone fortresses (dating back to when Portugal needed to protect itself from sea attacks) create a unique energy to the landscape that is also lined with resort hotels and beachside cafés. The coast in central Portugal is where many residents retreat on long weekends, or even just the day, for some time under the sun and to enjoy the abundance of fish and seafood platters. 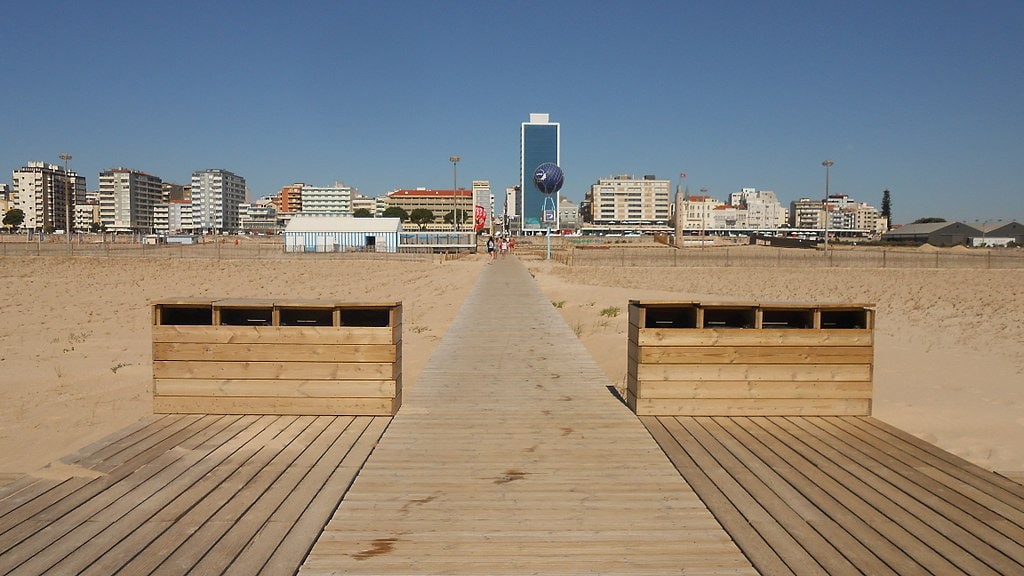 3. Bright and colorful Aveiro and its charming beaches

One of central Portugal’s treasures is Aveiro, known as the Venice of Portugal because of the long gondola-like boats that float lazily through the canals. Lined on either side of the main canal by Art Nouveau buildings, this is the heart of Art Nouveau in the country. There is also an open-air architectural museum. Aveiro is considered coastal but it is actually a 10-minute drive from two nearby beaches, Costa Nova and its rainbow dollhouse-like fishermen’s shacks, and Barra Beach. 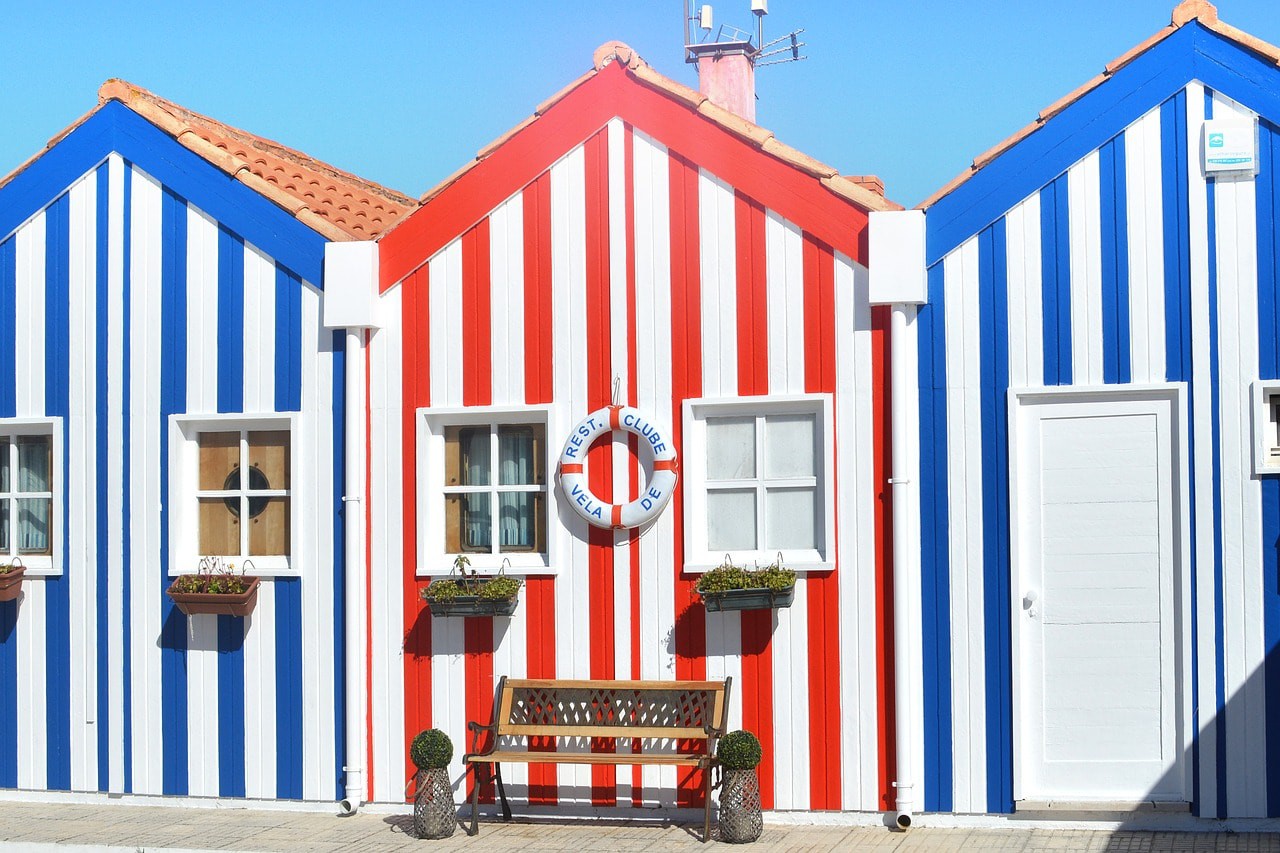 The center of Portugal is filled with a wealth of architecture and historically significant landmarks. You can visit the Cistercian Gothic Alcobaça Monastery, built in the 12th century and listed as a UNESCO World Heritage Site. There is also the Sanctuary of Fátima, Portugal’s most spiritual landmark, Coimbra and its famous university (one of the oldest in the world and where you’ll find one of the world’s most amazing libraries), the Manueline and Gothic Convent of Christ in Tomar, and about 15 castles along the eastern border along Spain. 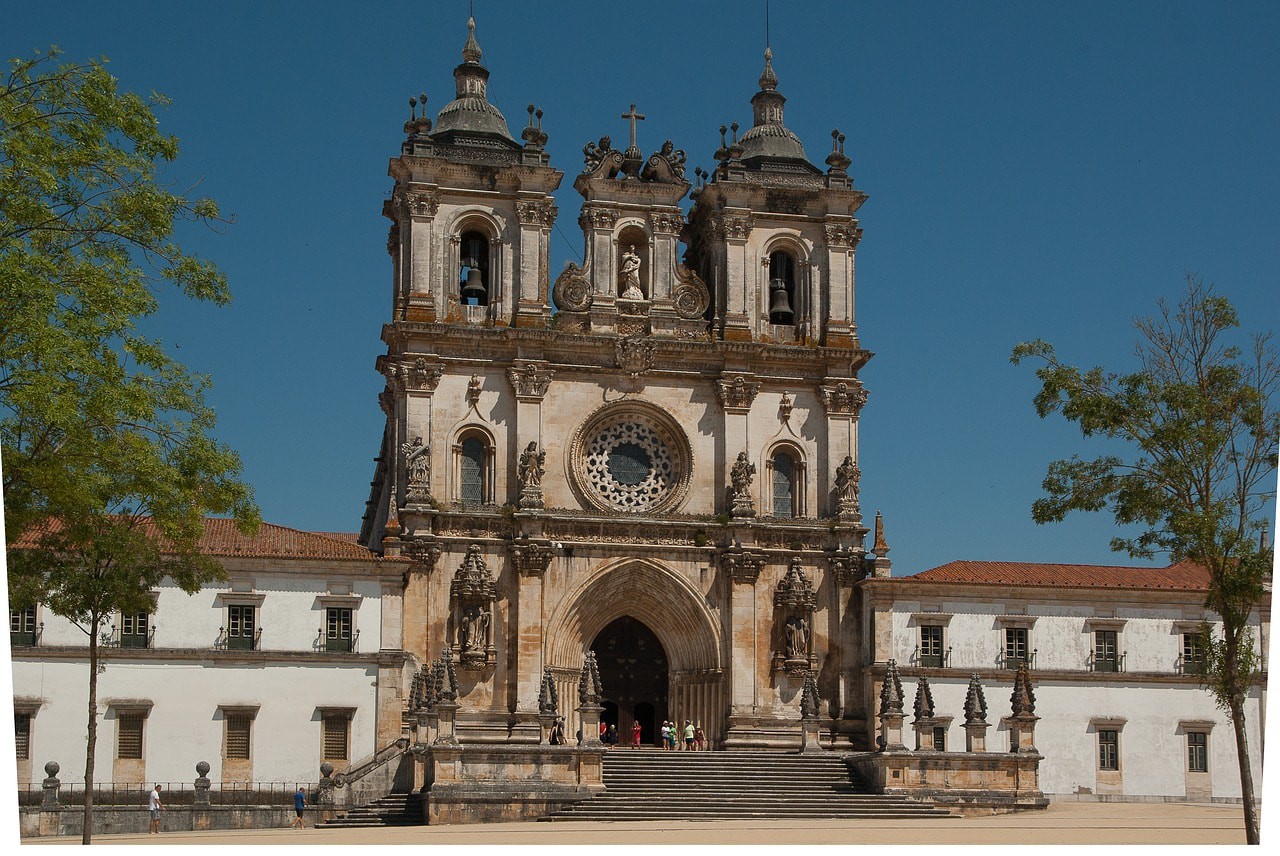 5. You can hop on a surfboard one weekend and skis the next

Though it may not have the number of museums, bars, galleries, and restaurants that are congregated in Lisbon and Porto, you still won’t get bored in the center of the country, and nature provides some of the best activities here. The terrain climbs from sea level to 1.2 miles (2,000 meters) above sea level in just 90 miles (about 150 kilometers), meaning you can surf in the morning and ski the snowy slopes in the afternoon during the winter months.

In pursuit of job opportunities and city life, the last few generations have moved to cities and larger towns, leaving some of the villages with a slightly abandoned feel, but they are very peaceful. These are perfect places to let your mind wander (do you need inspiration for a book or art project?). Spend a night gazing at the stars and across the countryside to pockets of light, hinting where the other nearby towns might be located. 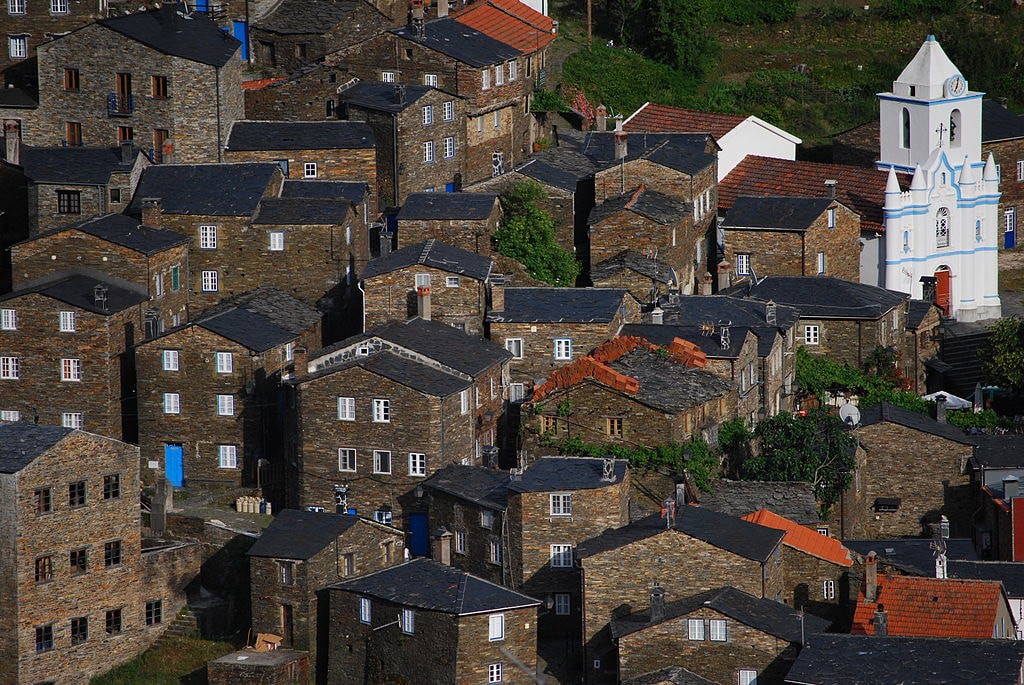 Piodão is just one of many beautiful and remote schist villages in central Portugal | © Concierge.2C / WikiCommons

7. For a spiritual experience in Fátima

Members of the Catholic world contribute significantly to tourism in central Portugal, attracted by the Sanctuary of Fátima and its legend about Mariam apparitions (according to the story, Saint Mary and an angel appeared to three shepherd children and then a crowd of believers, in a field where the sanctuary is now located).

8. Your dollar (or pound or euro) can stretch even further

As budget-friendly as Lisbon and Porto can be, you can save even more by visiting the coast and countryside of central Portugal.

9. The local pace is (even more) laid-back

Hard to believe, but true.

10. The local cuisine is delicious

You will see many of the same dishes in every Portuguese city, like grilled sardines, baked and fried cod, feijoada, and kale soup, but each region has its own specialties. The air in the coastal towns of central Portugal is filled with the scent of mixed fish stews (caldeirada) and freshly grilled and steamed shellfish, while inland an array of meat dishes like leitão (roasted suckling pig) and cabrito assado (roasted lamb) are common. During snacking hour (between lunch and dinner), enchidos (a mix of dried sausages) and cheeses are served with bread, olives, and jams, and residents of central Portugal are especially proud of the Queijo Serra da Estrela (Serra da Estrela cheese), characterized by its very aromatic, strongly flavored, and creamy center.

11. Laze away under an oak tree on the border of Portugal’s other favorite wine region

So maybe you will need to skip over the invisible line for this one – no one will tell. Hop across central Portugal’s southern border to be surrounded by miles of grape vines and wine-making farms in the northern Alentejo. While the Douro and its famously nectarous Port wine are international crowd pleasers and essential for holiday parties, the more subtle reds and whites produced in the Alentejo are the usual go-to table wines for daily enjoyment.

12. Chase after legends of the Knights Templar in Tomar

Tomar may seem like a sleepy city now, but it was once a powerful hub of the Knights Templar, and the Renaissance architecture and artwork are living memories. In addition to the hilltop, 12th-century Convent of Christ, once the Templars’ Portuguese headquarters, must-see landmarks connected to the Templars include the National Forest of Seven Hills and its gardens. Walking across the traditional calçada Portuguesa (tiled pavement) of the main square offers more picture-perfect and romantic moments, as does sitting by the Nabão River for a cup of coffee or to enjoy a leisurely lunch. 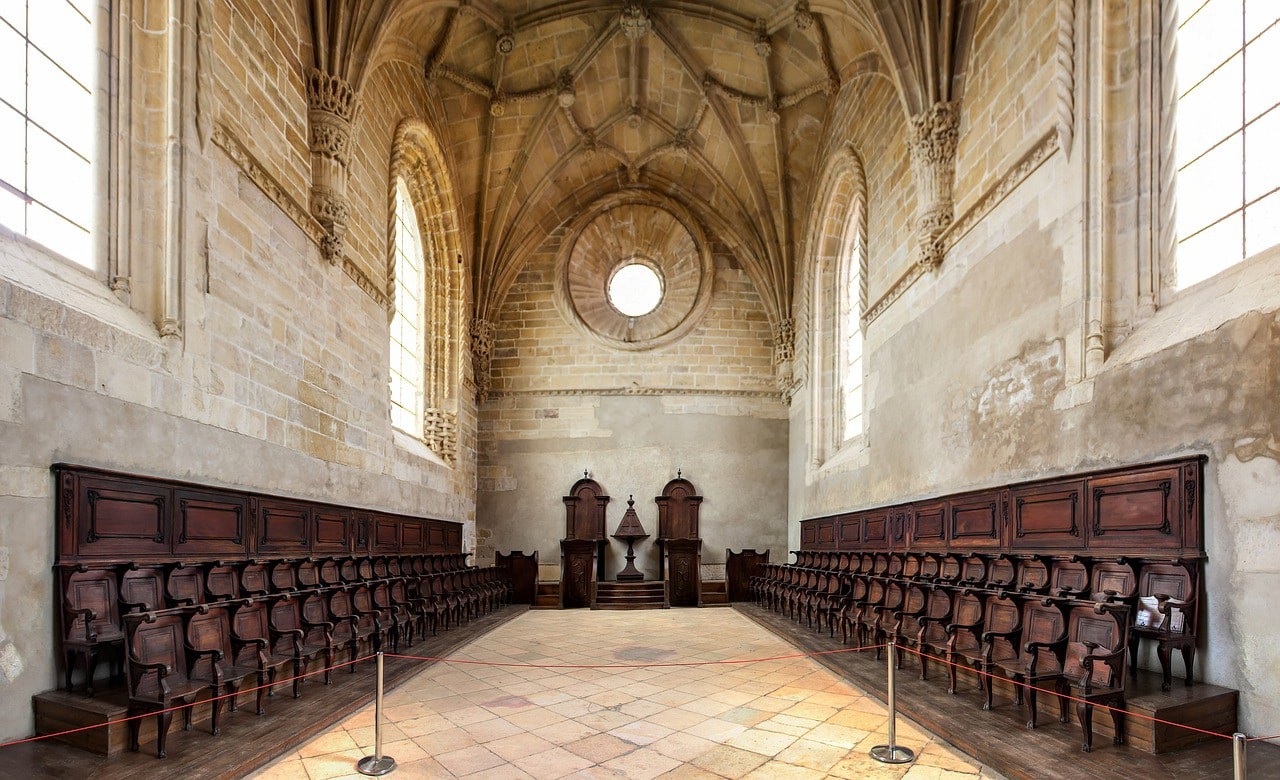 Inside the Convent of Christ | © XtianDuGard / Pixabay

13. Excellent hiking and Instagrammable locations in the Serra da Estrela

Hike Portugal’s highest peak, over craggy mountainsides and through tiny and remote villages, in the Serra da Estrela. Be prepared to be surprised, because hidden treasures pop out from around most corners, like a lagoon with a mysterious “waterfall hole” in the middle, and enormous religious pictures carved into the mountainside rock.

The medieval Castle of Almourol is believed to be haunted by young princesses waiting for their lost loves, but the castle’s setting, on a small wooded island in the middle of the Tagus River, is enough to make most visitors extra-imaginative and creative. Why not visit before or after exploring Tomar and see if you catch a glimpse of a princess sitting at the top of the tower? Prices for a boat ride and tour of the castle range from €6 to €10 per person and depend on the duration of the boat trip. 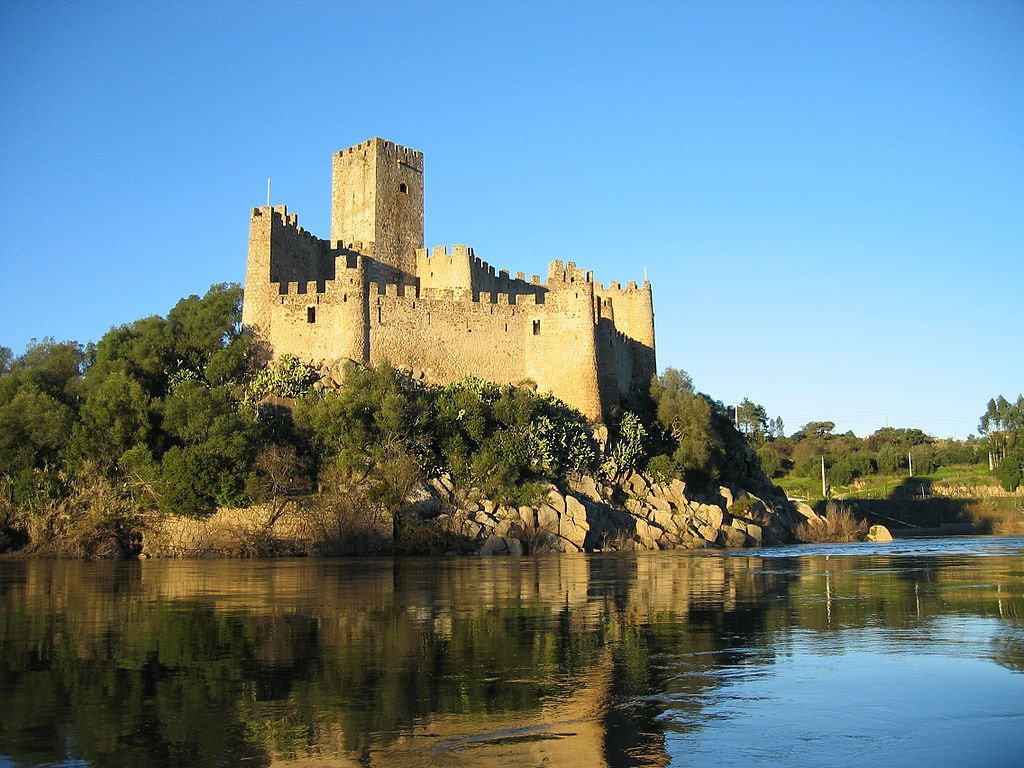 15. How many times can you say you’ve entered a fortified town?

Romantic Óbidos, set inside a tall medieval stone wall, can be seen from the highway, and the view is enough to make most travelers take the next exit and go exploring. Duck through the entrance, welcoming with a traditional azulejo mosaic, and you’ll find yourself in the middle of a charming whitewashed town filled with bright flowers and lined with eye-catching attractions from souvenir shops and restaurants to the cottages themselves and castles. One of the best things to do in Óbidos is walking around town on the top of the stone wall and enjoying the breathtaking view (just be wary if you’re afraid of heights, because much of the walk lacks a protective barrier).

10 Places That Prove Portugal is a Book Lover’s Paradise

1 thought on “Forget Lisbon; 15 Reasons Why You Should Visit the Center of Portugal Instead”