Home to great art and those prized ceramics, Delft is a Dutch delight off the beaten path.

The centre of Delft is one of the prettiest and most unspoilt of all Dutch cities – a classic grid of canals lined with lime trees and red-brick houses, many of them dating back to the 17th and 18th centuries.

At its heart is de Markt (1 on the map below) – the great market square dominated by the town hall and the high steeple of the 15th-century Nieuwe Kerk (the New Church), burial place of the Dutch royal family.

There is no better time to visit than this winter. Delft’s economic and artistic heyday was the 17th century, and no one caught the atmosphere and the detail of everyday life in the city then than the painter Pieter de Hooch.

Along with Vermeer, who lived nearby, he concentrated on scenes of ordinary people – often women – in their courtyards, kitchens and living rooms. They are among the most engaging of Dutch Golden Age paintings and a new exhibition of de Hooch’s work has just opened at the city museum – the Prinsenhof (2). Go now both to enjoy the city today and for this wonderful insight into its past.

British Airways (ba.com) flies from City airport to Rotterdam – about 15-20 minutes away by taxi. Otherwise fly to Amsterdam (try BA, easyJet and KLM) and travel on by train, about 40 mins €12, (£10.38). Another option is to travel by Eurostar (eurostar.com) from London St Pancras to Rotterdam and to travel on to Delft from there.

Museumshotel (3) (museumhotels.nl) is a neat, four star Best Western-affiliated hotel hard by the Oude Kerk (4) (Old Church) in the centre of town. If the main building is fully booked, there’s an excellent annexe just around the corner. Doubles from €125.

A little cheaper, but also in the historic centre, Hotel Leeuwenbrug (5) (leeuwenbrug.nl) is a small three-star with a lovely location on the old Cornmarket quay, with doubles from €79.

To get a grip on the historic centre of Delft start at the Oude Kerk, which was founded in 1246 but much adapted in later centuries – including the addition in 1350 of the tower which now leans so disconcertingly over the adjacent canal. The painter Vermeer is buried here and his tomb is marked by a modest plaque.

Next walk south along the Oude Delft canal (the first to be dug when the city was founded) past a flamboyant hop merchant’s house of 1520 and cross the bridge at Peperstraat (6). From here, jink through the back streets to de Markt.

This is the main town square – a huge open space defined by the 1618 Stadhuis (city hall) to the west and the Nieuwe Kerk (New Church) to the east. From here you can wander at will, exploring the quays and canals, or you can complete a neat circle back to the Oude Kerk via Voldersgracht (7) – Delft’s prettiest quayside – and Voorstraat.

The Pieter de Hooch exhibition is being held in the Prinsenhof museum (prinsenhof-delft.nl), a former convent which became a royal residence in the 16th century. The show opened a week ago with an unprecedented line-up of 29 of de Hooch’s paintings, including some of his greatest work from museums all over the world. It continues until Feb 16. Admission €17.50.

The blue and white ceramics for which Delft has been famous for centuries are still in production – and still hand-painted – at the Royal Delft factory (8), which was first established in 1653. It is the last remaining Delft earthenware factory from the 17th century. You can see the production process, visit the museum of historic pieces and a shop on site (royaldelft.com). Admission €14.

For local shops, boutiques and cafés Voldersgracht is the key street, while the city’s main market hosts 150 stalls in the square every Thursday. The amazing flower market is held on the same day a five-minute walk away on Brabantse Turfmarkt (9). And on Saturdays there is an art and antiques market along the Voldersgracht and the canals in the Hippolytusbuurt and Wijnhaven areas (though only from April until the end of October).

Het Klooster (10) (cafehetklooster.nl) is a friendly, relaxed bar and café on the corner of Vlamingstraat quayside near the Oude Kerk. It sells an impressive array of local and other Dutch beers (Delft is known for its brewing) from an impressive line-up of brass pumps and stays open until 1am. 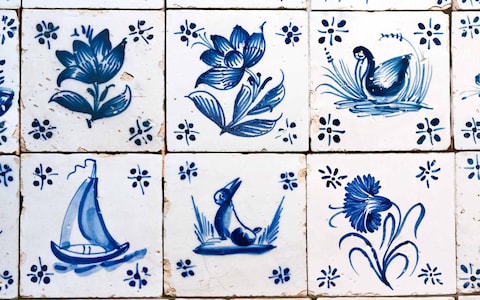 Delftware is to be found across the city CREDIT: ISTOCK

Spijshuis de Dis (11) (spijshuisdedis.com), which is on the Beestenmarkt, is cosy and informal but it gets rave reviews. Traditional Dutch influences dominate (lots of fish – both fresh and smoked) and there is a good choice of vegetarian dishes, but also meat and game. Excellent value with starters around €12 and main courses €18-25. Open Tues-Sat from 5pm.

Delft is sandwiched between Rotterdam (contemporary architecture and vibrant atmosphere) and The Hague (Holland’s historic capital with excellent museums). Both are just a short journey away by train.