BAKU: Switzerland face an anxious wait to see if they will make Euro 2020’s last 16 after Xherdan Shaqiri’s superb double helped them secure third place in Group A on Sunday (Jun 20) with a 3-1 win over a dismal Turkey, who were sent packing after another defeat.

The Swiss, who finished level on four points with Wales but behind on goal difference, will hope to secure a spot in the knockout round as one of the four best third-placed finishers from the six groups. 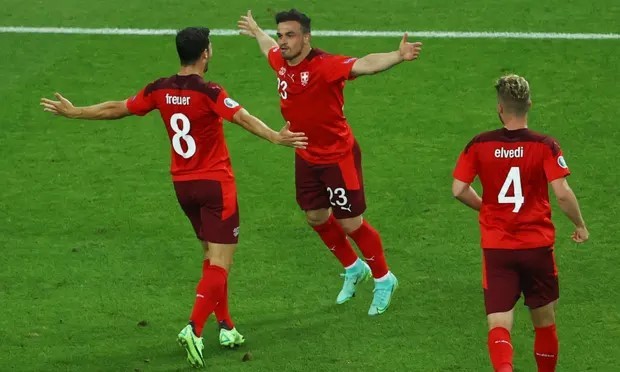 Turkey, who finished fourth with three defeats, were tipped as pre-tournament dark horses but instead will head home after a hugely disappointing campaign that saw them lose all three games, conceding eight goals and scoring only once.

The game encapsulated Turkey’s tournament, as they began full of fire and fury and started at a scintillating pace, only to collapse quickly as Switzerland outmanoeuvred them tactically to take an early lead.

The Swiss took the lead when Haris Seferovic received a pass from Steven Zuber on the edge of the area before rifling the ball into the bottom right corner in the sixth minute.

Exasperated, Turkey regrouped and tried again, only to go 2-0 down 20 minutes later when Zuber found Shaqiri in a similar position, and he curled an exquisite shot beyond the despairing dive of Ugurcan Cakir.

Turkey had their chances, but Swiss keeper Yann Sommer made a string of superb first-half saves as they searched for their first goal of the tournament. 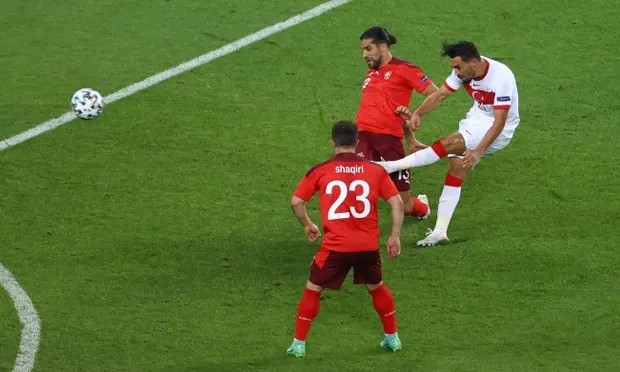 Irfan Kahveci finally delivered it, salvaging some pride for the Turks in the 62nd minute with a spectacular strike from distance to reduce the deficit.

Whatever joy their thousands of supporters in the stands felt was short-lived as their shortcomings were shown up again six minutes later as Shaqiri fired home another Zuber pass to complete a surging counter-attack.

With Shaqiri withdrawn, Granit Xhaka hit a post with a powerful free kick as the Swiss continued to chase the goals that might have enabled them to take second spot, but to no avail.

With Burak Yilmaz was left isolated up front, the Turkish challenge fell away. All too often, they settled for wild shots from distance, but it was the defence that was the source of their problems.

Switzerland created 23 scoring opportunities, getting 10 of them on target, and Turkey never got to grips with the scheming Zuber as he set up all three goals.

“When the expectations are high, the disappointment is bigger … I apologise to our nation. I trust my friends, we have learned a lot from this experience,” defender Merih Demiral told Turkish TV.

The Swiss will now have to wait for the knockout picture to become clearer, but their industrious performance and Shaqiri’s finishing bodes well for the next phase if they make it.

“I think we played like a unit, and it was crucial today against this team. We knew if we play good we’re going to create a lot of chances against this team, and we did so,” Shaqiri told BEIN Sports.

What To Do In Geneva, Switzerland | 25 Great Geneva Attractions

The Top Peaks Of Switzerland