A cheeky elephant sneaked into a game lodge to drink from a swimming pool – and ended up bumping against a game ranger filming the amazing encounter.

The majestic wild animal got so near that its tusk touched the man’s shoulder and provided an extreme close-up of its wrinkly grey hide.

Wildlife manager Eugene Troskie, 34, had just settled down on some decking at the lodge he runs in South Africa when a herd of elephants arrived.

The juvenile male elephant, around 20 years old, had taken a big slurp from the pool with his trunk when Mr. Troskie reached for his phone to record the moment. 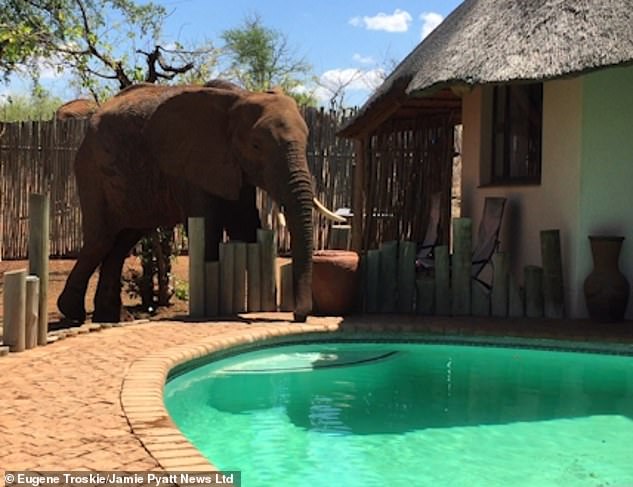 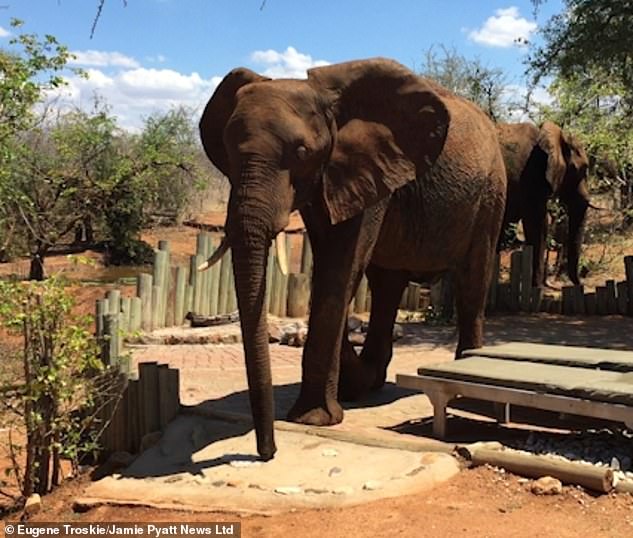 As Mr. Troskie rests against a tree bearing juicy shoots, the animal, aged around 20, heads his way, at Lion Place Lodge in the Grietjie Private Game Reserve inside Kruger National Park

To his surprise, the elephant began walking straight towards him, looking to feed on juicy new shoots from the tree which the ranger was resting against – without seeming to notice the man was there.

Mr. Troskie, who runs Lion Place Lodge in the Grietjie Private Game Reserve inside Kruger National Park, kept calm and stayed still so as not to spook the elephant.

He said: ‘I thought he must have seen me as he got closer and closer but he clearly hadn’t and as his trunk went up to feed from the tree, his right tusk came down on my shoulder. 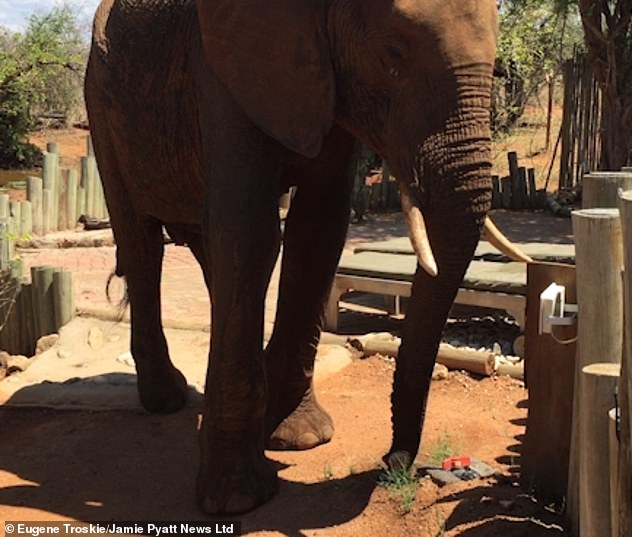 Before aiming straight at the ranger, the elephant chomps a short while on some vegetation 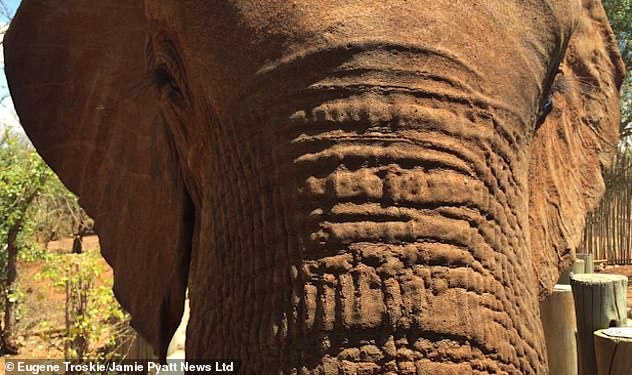 The animal then notices the shoots which Mr. Troskie is sitting against and goes to feast on them. At this point, the ranger stays very still – and the elephant gets so close that his right tusk makes contact with Mr. Troskie’s shoulder 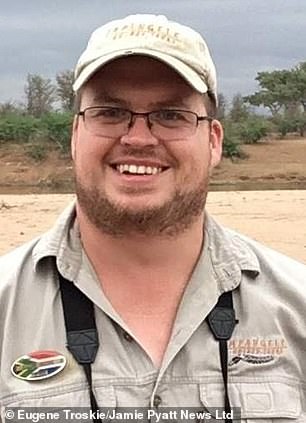 Eugene Troskie (above): ‘I think the elephant thought I was a deck ornament and was a little surprised when I moved. He showed no aggression even when he found out I was a human’

‘I moved my phone to try and get a better shot but as I moved it, the elephant realized I was not a part of the fixtures and fittings but a human and got a shock and shied away.

‘It was the most incredible of encounters to have a wild elephant who was unaware of your presence rest his tusk on you but I knew I was never in any danger from the animal.

‘My ten years as a game ranger teaches you when they are agitated or angry but this fella was completely relaxed and I was more than happy to let him come forward and say hello.

‘It is not something I would have allowed a guest to do as you never know how a guest would react – but this was just me and him getting to know each other a little better and to chill out’.

The herd of 25 elephants regularly visit the waterhole just on the edge of the camp but sometimes they wander in and take a drink straight out of the pool to the delight of the camp guests.

Lion Place Lodge is situated near Phalaborwa in Limpopo Province and is home to the Big 5 of elephant, lion, leopard, buffalo and rhinoceros and is set in 2,800 hectares of prime savannah. 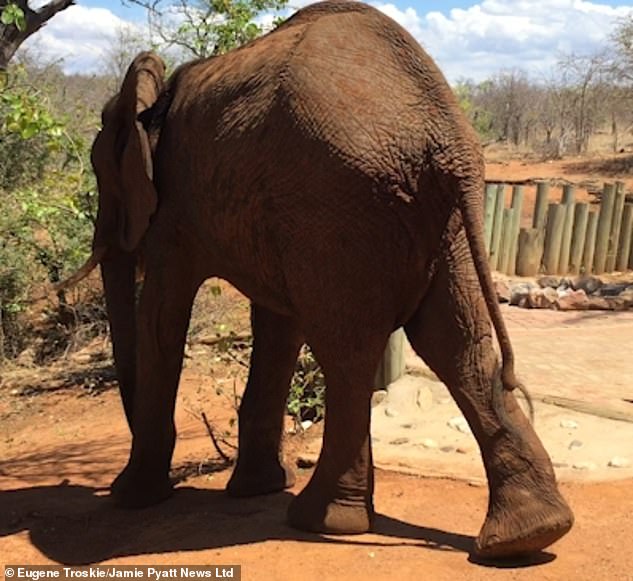 ‘If you approached them at their waterhole, they would perceive you as a threat but when they come into a lodge, everything smells of humans so they are not surprised by humans,’ said married father-of-one Mr. Troskie

Mr. Troskie, a married father-of-one, said: ‘I have a lovely photo of three elephants lined up next to each other popping their trunks into the pool and having a lekker [delicious] drink of water’.

‘When the elephants come into the lodge, they know they are in your territory and it is a very different proposition to you approaching them when they are relaxing in their own territory.

‘If you approached them at their waterhole, they would perceive you as a threat but when they come into a lodge, everything smells of humans so they are not surprised by humans.

‘I think the elephant thought I was a deck ornament and was a little surprised when I moved. He showed no aggression even when he found out I was a human,’ he said.

African elephants can grow to 13 feet tall at the shoulder and weigh 12,000lb. 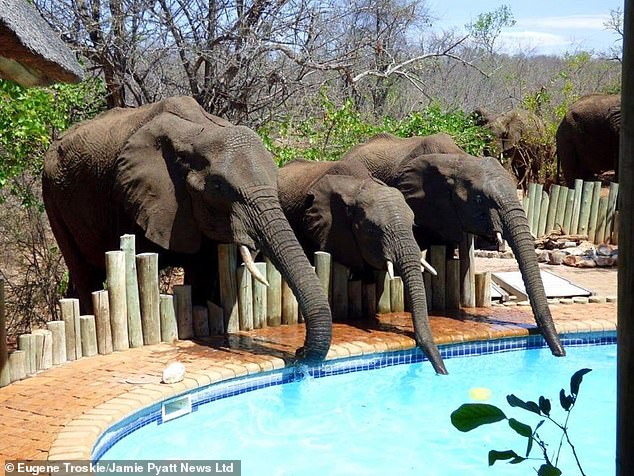 Mr. Troskie also took this picture of a trio of tuskers having a lekker [‘delicious’] drink of water at his lodge

DNA reveals new clues: Why did mammoths die out?

I want to make a trunk call! Cheeky baby elephant tries to steal her human friend’s phone from his hand