The Dutch port city of Rotterdam is an open-air gallery of modern and contemporary art, set against a backdrop of some of the most adventurous architecture in Europe. More than 1000 artworks and monuments from modern and contemporary masters fill its public spaces along with sculptures by under-the-radar artists, vivid street-art murals, pioneering urban landscaping and wildly innovative installations.

Rotterdam’s role as a creative hub rose phoenix-like from the ashes of its WWII devastation, which gave architects and artists a blank canvas that continues to evolve today and whose works inspired hope and courage during the city’s massive reconstruction. Thanks to Rotterdam’s pedestrian-friendly size, a tour of its public art is one of the great ways to explore this uniquely modern European urban landscape. 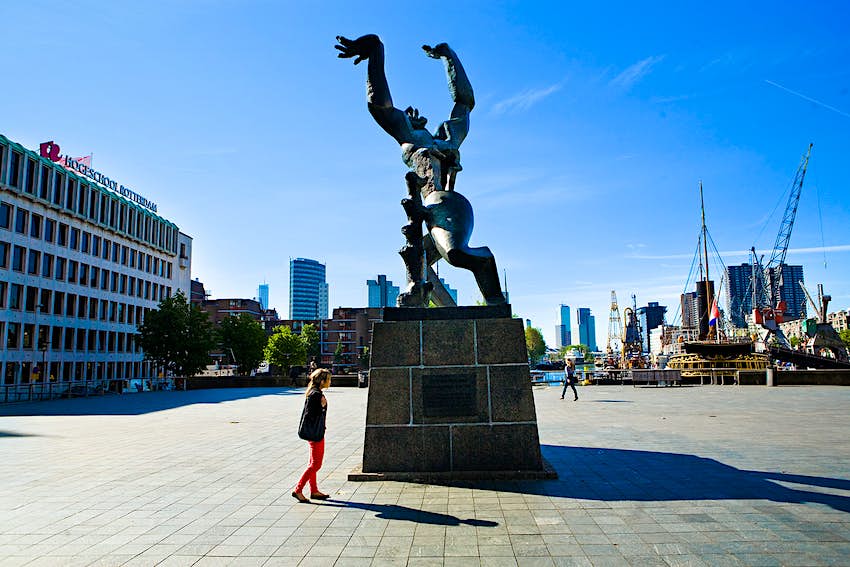 A powerful reminder of the horrors of WWII is Ossip Zadkine’s masterwork, The Destroyed City (1951-1953). Rising 6m high, it depicts a man falling back against a tree and throwing his arms skyward in despair; the gap in his torso represents the hole left in the heart of the city following the 1940 bombardment. The sculpture stands near Blaak, near Rotterdam’s monumental, Markthal Rotterdam, a futuristic residential building that opened in 2014 and incorporates an incredible arched muralled ceiling over its enormous market hall. At an unbelievable 11,000 square meters in size, some have pointed to this mural as the largest artwork in the Netherlands.

Other renowned artists you’ll encounter include Golden Age sculptor and architect Hendrick de Keyser, whose larger-than-life-size sculpture Erasmus (1622) commands the Grotekerkplein, a public square in front of Frote of Sint-Laurenskerk (St Lawrence Church), the only medieval building in Rotterdam to survive WWII bombing. The statue immortalises the humanist, theologian and thinker Desiderius Erasmus Roterodamus (the city’s signature white cable-stayed bridge, the Erasmusbrug, is also named after him).

Pablo Picasso was the mastermind behind Sylvette (1970), which he designed in Cubist style before it was rendered in sandblasted concrete and black stones by his friend and collaborator, Norwegian artist Carl Nesjar. Set on Westersingel near the city’s top art museum, Museum Boijmans Van Beuningen, it portrays Picasso’s model and muse Sylvette David, whom Picasso met in France in 1954 when she was 19 (David herself later also became an artist).

Appearing to protrude from a brick wall, Henry Moore’s Wall Relief No. 1 (1954), with geometric patterns and Moore’s classic abstract figures, is made up of 16,000 hand-carved bricks. It’s just southwest of the main entrance of the striking, stainless-steel-clad Rotterdam Centraal train station on Weena.

Perhaps the most controversial big-hitter is Paul McCarthy’s outsized Santa Claus (2001), on Eendrachtsplein. The bulbous gnome-like figure holds aloft what appears to be a Christmas tree but is actually a sex toy – a fact that stirred up huge debate among politicians and residents, reigniting the timeless question of what constitutes art. 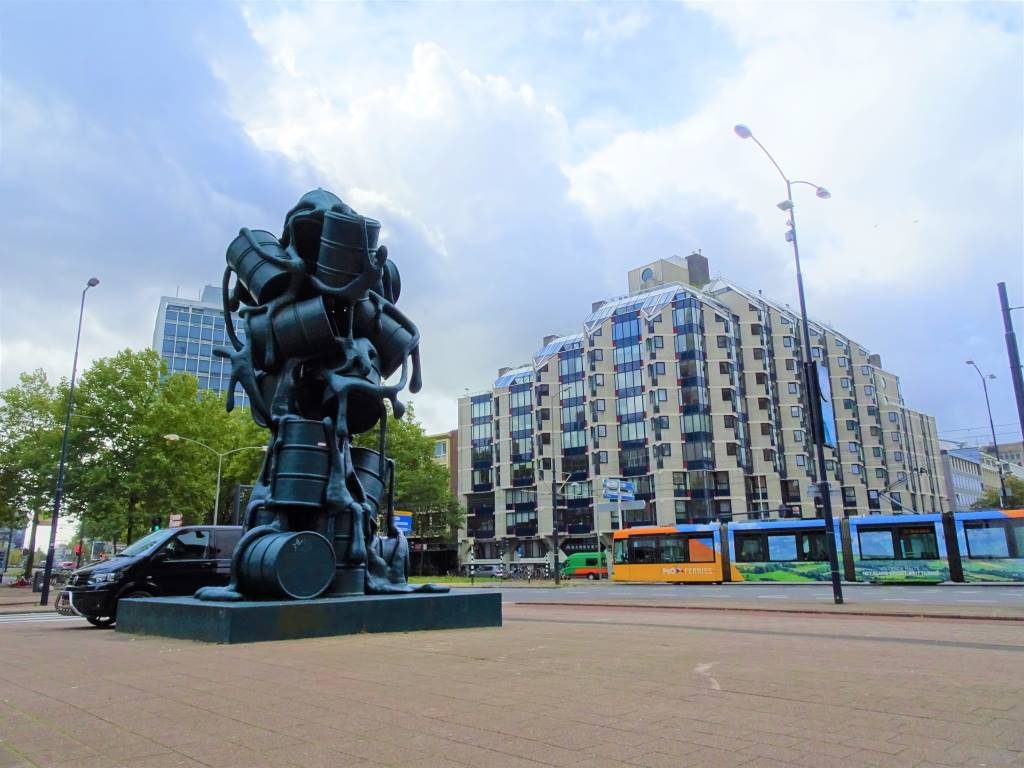 Lesser-known works are everywhere you look. Standouts include the highly symbolic sculpture Cascade (2010) by Atelier van Lieshout: a polyester-constructed stack of 18 full-size oil drums that drip with human figures. The soaring column dominates Churchillplein opposite the Maritiem Museum (Maritime Museum).

Intense yellows, oranges, greens, blues, pinks, purples and more eye-popping colours are used in Henk Visch’s Marathonbeeld (2001), with the artist’s aim being to brighten even the rainiest day. The angular structure, which recalls a giant, deconstructed Rubik’s cube, stands at Willemsplein in the shadow of the Erasmusbrug. 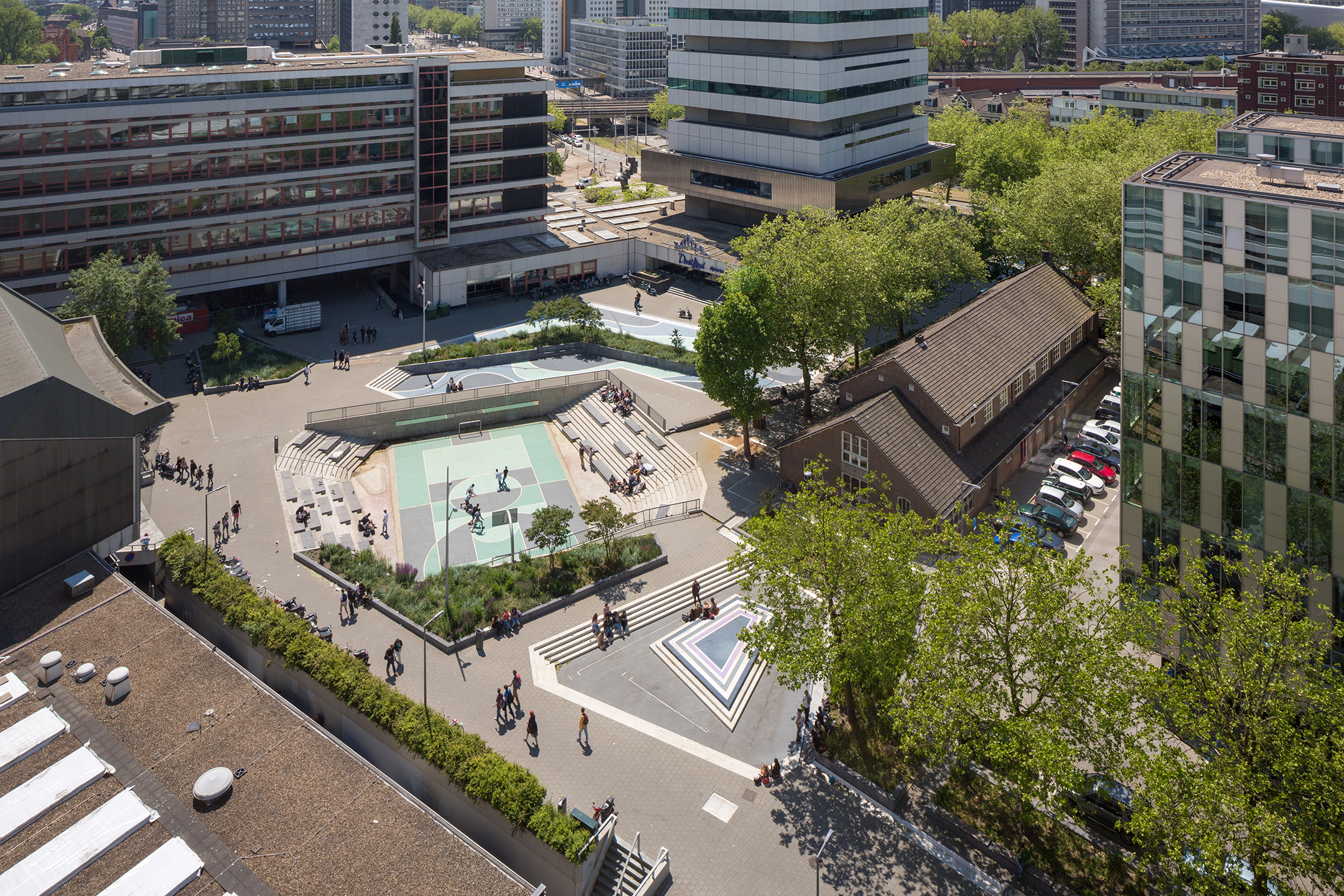 Art in Rotterdam is not only aesthetic but often functional too. In front of Appel’s work by the Hofplein Theater is the Waterplein, Benthemplein – a geometric, amphitheatre-style water plaza. Sections painted in blues and greens show where excess rainwater is collected, as part of the commitment to further climate-proof the below-sea level city by 2035.

One of the most intriguing installations in Rotterdam right now is the Bobbing Forest (www.dobberendbos.nl; 2016), built by local art collective Mothership founder Jeroen Everaert and based on work by artist Jorge Bakker. This installation is found in 19th-century port Rijnhaven, itself a ‘test site’ for new urban design initiatives where new high rises dominate. The ‘forest’ comprises 20 elm trees floating in decommissioned ocean buoys (including one on the shoreline that you can view up close), and is meant to question the relationship between urbanites and the natural environment. It’s expected to remain here in the harbour until at least 2021.

A brilliant place to find out about temporary public art exhibitions, installations and other events to check out during your visit is the Witte de With Centre for Contemporary Art – one of several contemporary culture institutions on and around Witte de Withstraat, the city’s most creative street. Several institutions on this street (including TENT, Worm and the gallery MAMA) are known as the ‘Kunstblock Rotterdam’ (Arts Block Rotterdam; http://kunstblock.nl). These boundary-pushing spaces encapsulate the diversity of Rotterdam’s art scene, both outdoors and in, across all genres. The first Friday of every month is Art Evening, when the venues are free to visit between 6pm and 9pm, and free one-hour introductory tours set out from 7pm.

Look out too for ‘Z-Files’ (www.cbkrotterdam.nl), a program of regular talks, tours and events that showcase public art in the city and spotlight new and upcoming projects.

More and more colour is splashed across the city as artists create dazzling street murals. This scene is much more fluid than the city’s sculptures, with works regularly being renewed. A reliable spot to catch rotating murals is around Station Hofplein (the former station of the disused Hofpleinlijn railway, with cultural and creative spaces in its viaduct arches). You’ll also find street art along with the wooden Luchtsingel (‘air canal’) footbridge over the train tracks, which links Station Hofplein with the repurposed office block-turned-studio hub, the Schieblock.

For insight into Rotterdam’s vibrant street art, join the Graffiti & Bar Tour. These two-hour guided walking tours are run by hip backpacker hostel Ani & Haakien, and depart at 9pm on Friday nights from the hostel, just near Rotterdam Centraal train station. Non-hostel guests are welcome and no advance reservations are necessary. Payment is by donation.

Alternatively, the excellent, inexpensive app, The Rotterdam Street Art Tour (RSAR; http://rewriters010.nl) maps out a 7km-long self-guided trail that takes in murals especially created by local artists for the route. Rotterdam is an immensely walkable city, and there are a number of resources to help you make the most of your time exploring the city’s rich public art. Apps that provide curated, self-guided tour routes through Rotterdam’s vast collection of public art include the free Rotterdam Routes (http://rotterdamroutes.nl), with various walking and cycling trails such as an Art & Poetry route.

Finger-on-the-pulse local outfit UrbanGuides has Art & Architecture walking and cycling tour route maps, as well as route maps of the city’s most artistic neighbourhoods; it also runs fascinating guided tours on foot and by bike.

Meanwhile, the city has just released its own Rotterdam Tourist app for iOS or Android, which it promises will feature info on loads of sights and attractions in Rotterdam, a city map, an updated events calendar and locations of Wi-Fi spots. It can also be used offline without an internet connection.

What do you know about Dutch cheese?