One sunny Thursday in May, we took a quick trip to visit the Gouda cheese market. We love cheese in general, but Sarah really really loooovvves Dutch cheese. Also, having lived in the Netherlands for six months (at the time of first publication), it was time to visit this small yet famous city. Though we were coming from Rotterdam, if you’re looking for day trips from Amsterdam, you should also put Gouda on your list. Here is some hopefully helpful information to plan your visit to Gouda and its famous cheese market.

How do you pronounce “Gouda”?

Gouda cheese is known throughout the world. And where we come from one pronounces this cheese “goo-da.” This is not how the city of Gouda in the Netherlands is pronounced. We learned this on a train a while back when the conductor announced the stop. She said something that kinda sorta sounds like “gghhow-da” (the Dutch “g” is difficult to say and even harder to transliterate). Needless to say, our minds were blown! But we’ve been attempting to pronounce it correctly ever since.

When is the Gouda cheese market?

The Gouda cheese market only takes place during a specific time of year. Specifically, you can visit the cheese market on Thursdays 10:00-12:30 from the beginning of April through the end of August. In 2020, it’s open from April 2-August 27. The market is not held on national holidays.

Can you take a day trip from Amsterdam to the Gouda cheese market? 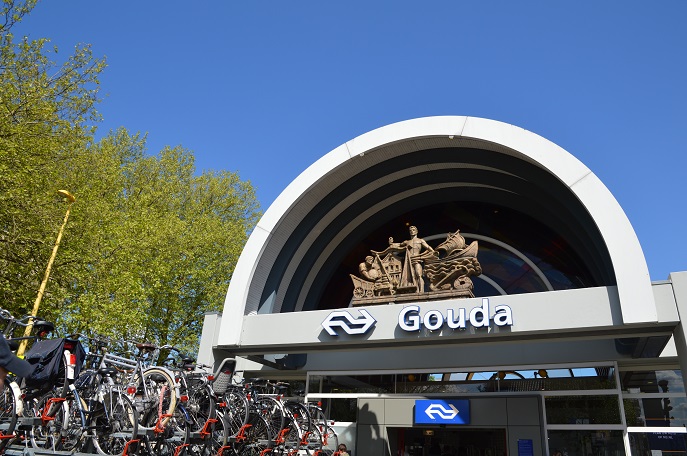 Gouda makes for a great day trip from Amsterdam or Rotterdam. And it’s really easy to take public transportation there. From Amsterdam, trains run every 10 minutes and take a little under an hour. From Rotterdam (where we live), trains run every 15 minutes and take about 45 minutes. The cheese market, which is held in the main market square, is about a 15 minute walk from the Gouda train station. There are super clear signs (as there are everywhere in the Netherlands) directing you where to go.

So what happens at the Gouda cheese market? 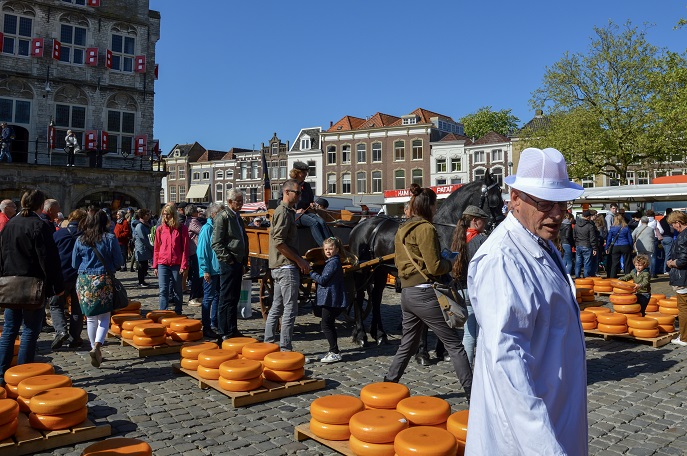 As we mentioned above, the Gouda region is well-known for its cheese – specifically its farm cheese (“boerenkaas” in Dutch). At the Gouda cheese market, farmers “sell” their cheese. (Read more about why this is in quotes in the next section). In the middle of the market square, surrounded by large wheels of cheese, farmers and buyers make their deals. 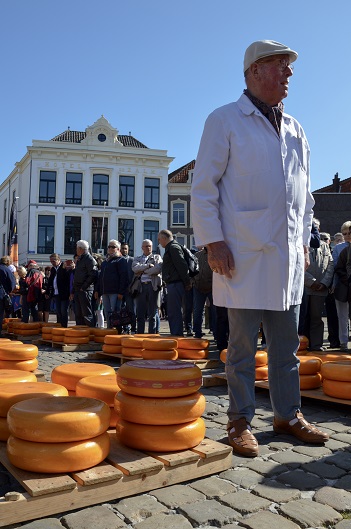 The deal-making process is done by back and forth negotiation accentuated by each person clapping the other’s hand. We must say, it’s fun to watch. But unfortunately, there are a lot of people watching. There’s also an MC (a somewhat absurd looking fellow dressed in a bright yellow suit holding a cheese microphone) who tells the crowd what’s going on (in Dutch). Once the cheese is sold, it’s loaded onto horse-drawn carts by young men and taken away. 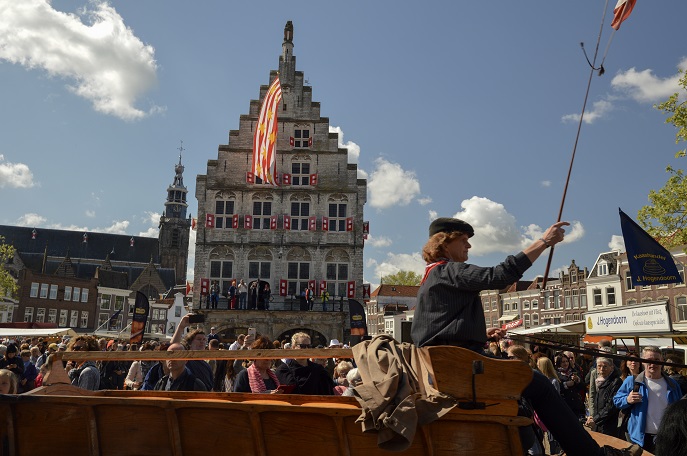 All the action takes place in front of the Goudse Waag, which was the old cheese weighing house. It’s now home to a museum and the Gouda tourist information office. It costs 4.50 EUR to enter and was absolutely swarmed with people when we were there so we skipped it.

Is the Gouda cheese market real?

We don’t think so. The Gouda cheese market is described as an historic reenactment and it is most definitely a tourist attraction. In researching this post, we learned there is a real cheese market in the Netherlands – where the prices of boerenkaas are determined. It’s held in the city of Woerden on Saturdays. In 2020, it’s open May 2-August 29. You can read more about the Woerden cheese market here.

Can I taste cheese at the Gouda cheese market? 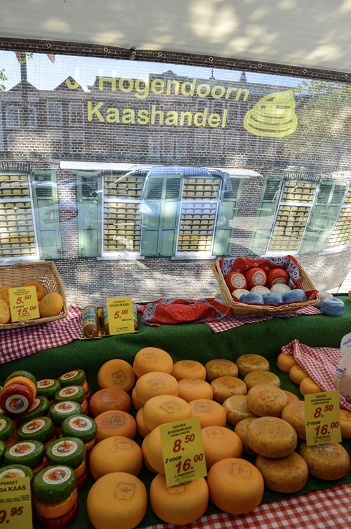 This is the most important question, right?! And the answer is yes. But unless you’re an extremely pushy person, you won’t have much luck tasting it at one of the tents outside. We tried, but were stymied by all the other tourists. We were able to taste quite a lot of delicious Dutch cheese inside two cheese stores. The first was Kaas van Kees, a smaller shop on a side street. The second was Gouds Kaashuis, which seemed to be the most popular place to taste and buy cheese due to its location right next to the market square. There was a long line of people when we first walked by, but we were able to get in on our way out. We love this kind of cheese, so we were quite happy and sated after tasting it all.

The Gouda cheese market is held outside. There are no barriers or steps to get to it, but there are a whole lot of tourists there. Moving around is annoying for able-bodied people, so it might be a bit frustrating for those with accessibility issues or special needs. We did not enter the Goudse Waag ourselves, but in our research we learned that the ground floor is wheelchair-accessible. 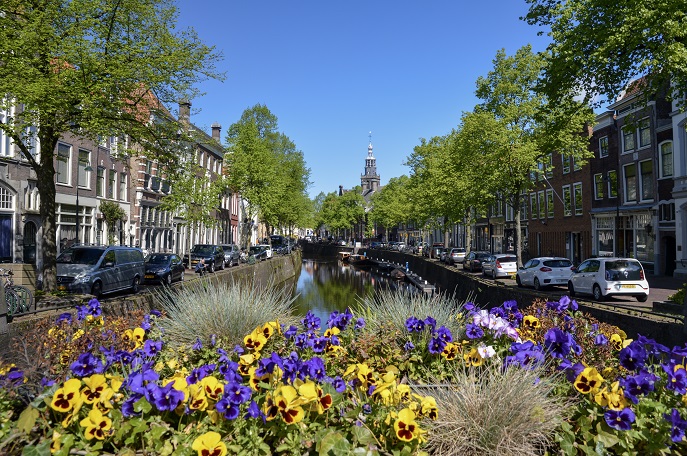 Yes! Gouda is yet another delightful Dutch city with canals and slightly crooked buildings and narrow alleyways and a whole lot of charm. 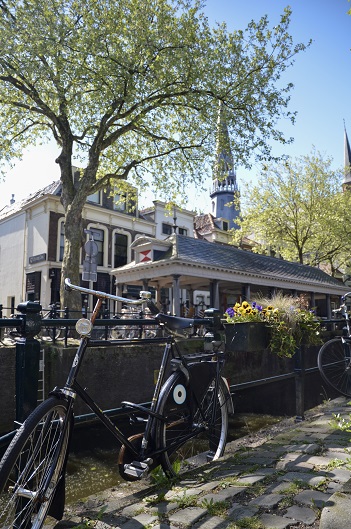 The cheese market activity is flanked by two stunning buildings: the Goudse Waag and the Stadhuis (city hall). We are keen to return to Gouda on any other day of the week or during another season to get to know the city better as it is on average, non-cheese-market days. 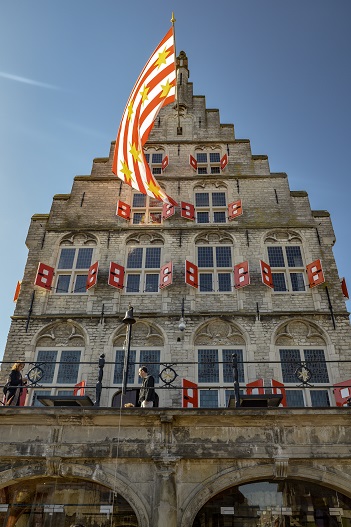 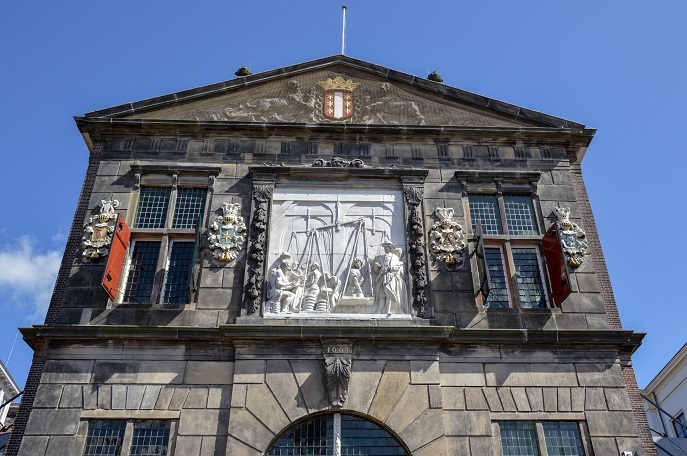