Short bobbed haircuts, figure-hugging skirts, flat shoes – the new fashions of the 1920s were wildly popular, but they also had their avowed opponents. Seeking a return to the values ​​of the past, these groups set about re-establishing Switzerland’s long-dormant customs of traditional dress.

The Grossratssaal council chamber in Lucerne had rarely seen so many women before. There were women from Zurich wearing the Patrizierinnentrachten garb, the ladies of Thurgau were there in their traditional regional workwear, and fräuleins from St. Gallen paraded in the costumes of the Fürstenländer and the Oberländer. Bernese ladies displayed their black shawls. There were also women from Solothurn, Baselland, Vaud, the Gruyère region and Central Switzerland – all wearing the distinctive traditional dress of their own regions. The 300 ladies in traditional costume to a rousing rendition of ‘Rufst Du mein Vaterland’, the former national anthem of Switzerland, and there was an atmosphere of real euphoria.

The reason for this folkloric mass gathering was the founding of the ‘Schweizer Trachten- und Volkslieder-Vereinigung’, the Swiss traditional dress and folk song association, in Lucerne on 6 June 1926. The new association aims to preserve the nation’s customs of cultural attire. and encourage Swiss women to wear their traditional local garb, referred to as the Kleid der Heimat, with pride. The Baselland contingent suggested that the new association take a stand ‘against fades such as the Eton crop’ and against ‘every foreign infiltration into the artistic sphere, especially in the areas of music and singing’; war was to be waged particularly on the ‘foxtrot, shimmy, tempo, the trashy songs in operettas, etc.’ The proposal was met with thunderous applause from the assembled women. 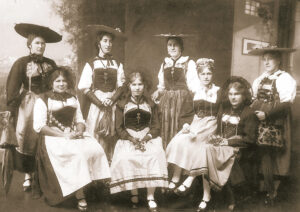 The term ‘foreign fades’ referred to the new trends of the time, in women’s fashion in particular. It wasn’t just traditional costumes that were being rediscovered; ladieswear in general took a major leap into the modern in the 1920s. The clean lines and unembellished forms in design and architecture were echoed in the latest fashion trends. Women were able to broaden their horizons during this period, no longer working only as nannies, waitresses or dressmakers; instead, they were needed in large numbers to help staff the booming offices. For many women, these changes mean being freed from old patterns of behaviour, and stepping into a new role in society. It’s no surprise that more women were demanding political participation with women’s suffrage, this time by means of a petition (and yet again, in vain!).

Nowhere was the new model of the role of women in business, politics and family so quickly and consistently as in fashion. Fashion houses and tailors brought in new cuts, shapes and articles of clothing that were in step with the new times. Women now showed their legs, which they used to stand firmly on their own two feet. They had strong arms with which they could drive their own cars. They had clever minds and short wanted hairstyles, because that was what they wanted. 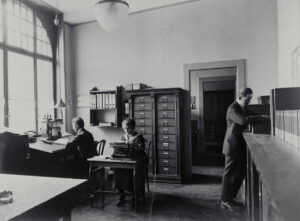 The modern life to which they now aspired necessitated a new style of dressing: women wore the shirt dress that previously had only been worn by women working the land, or knee-length, figure-hugging skirts, and under them – the very latest thing – transparent artificial silk stockings that showed their legs. The waistline, hitherto accentuated with constricting corsets, seemed to have disappeared completely. They had their hair cut to the length of a matchstick in the short, bobbed hairstyle known as the ‘Eton crop’, which sometimes disappeared under the hat known as a ‘cloche’ for its bell-shaped appearance. Long pearl necklaces, copious tassels and riotous fringes were the accessories of the new way of life. Even costume jewelry made from inexpensive materials was worn, as well as ostrich feathers and artificial flowers.

Something of the sparkle and glamour that was strutting the catwalks in fashion capitals like Paris and Milan found its way into the wider world, including Switzerland. The ‘new women’ stepped out with short hair, smaller busts, slim hips and long legs, sometimes wearing trousers, flat shoes, cigarette in hand, and seated behind the wheel of a car. When make-up, lipstick and nail polish made the jump across the Atlantic, Switzerland’s strait-laced conservatives finally hit the roof. The new-fangled powders and cosmetics were disparagingly referred to as ‘Müüli- und Nägelisüüch’. 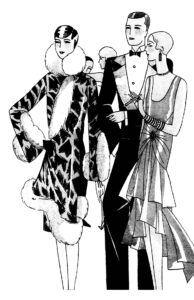 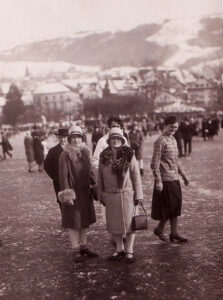 Scathing criticism and the anti-fashion movement

The new styles of ready-to-wear clothing attracted criticism, as in the magazine Katholische Schweizerin (The Catholic Swiss woman) in 1923: ‘The function of a dress is to cover and protect the body. Dresses that are too short, too tight-fitting, that accentuate the body’s shape excessively, dresses with low-cut necklines, with too short sleeves, diaphanous dresses without sufficiently protective undergarments, do not achieve this aim.’

In a way, World War I launched the comeback. In 1916 a group of Vaud women got together in Sauvabelin, determined to counteract the external pressures of the war by using traditional costumes to maintain Switzerland’s unique national character. Something important happened: for the first time, tailoring instructions for traditional dress types and rules for the correct wearing of traditional costumes were issued. 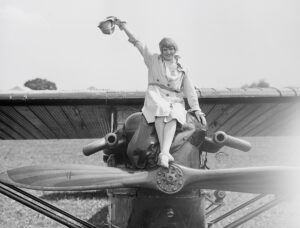 After the war ended, a renaissance in traditional costumes gradually took hold. What may come as a surprise is that the interest in wearing traditional dress was urban; city-dwellers too were now keen to wear the Kleid der Heimat. At that time the city was for many a mass of negative aspects, with poverty, housing shortages, moral decline, filth and suffocating overcrowding. This disaffection with city life, augmented by misgivings about the growing influence of international trends, was set against the down-to-earth customs of traditional dress and folk songs.

Then, as mentioned, the Swiss traditional dress and folk song association was founded in 1926 – and rather tellingly, not in the countryside, but in the urban city of Lucerne. From then on, the new mingled with the old; neither ousted the other. Instead, both past and present coexisted in Switzerland. Despite the popularity of the Eton crop, many new folk groups wearing traditional dress were still being formed at the end of the 1920s. Anti-fashion established itself alongside fashion: The Kleid der Heimat was reborn. 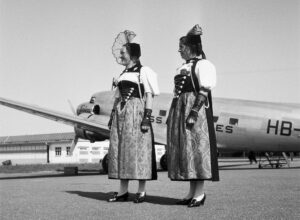 The 7 Best Coffee Shops In Switzerland

11 Things You Need To Do In Bern, Switzerland