A kayak trip in the Spreewald — a wooded moorland that has been designated a Unesco-protected biosphere reserve — is an easy train trip from the city.

From its source in southeastern Germany, near the Czech border, the Spree River flows steadily to the northwest, until it joins the Havel River in the Berlin borough of Spandau. Before it reaches the Havel, the Spree slices Berlin in two: a jagged cut from east to west.

A double-decker regional train follows the Spree from Berlin’s Alexanderplatz station through the concrete and clubs of East Berlin and into the open fields of Brandenburg, a state in the former German Democratic Republic. The train glides past lonely farmhouses and stumbling calves, unconcerned by their proximity to a major metropolis, headed for the Spreewald, a wooded moorland (named for the river that runs through it) that is crisscrossed by roughly 800 miles of waterways.

At the train stop for Tropical Islands, a theme park with white sand and palm trees built inside the otherworldly dome of the former Brand-Briesen Airfield, passengers in board shorts and flip-flops file out. Those in zip-off pants and SPF 50 stay on. Two stations later, they reach their own destination: Lübbenau.

Germans put a lot of stock in the regenerative powers of the great outdoors. The country has 16 national parks and thousands of conservation areas, nature parks, biosphere reserves and natural monuments. Many of these areas can be reached by train or bus — so that, for Germany’s urban, carless residents, public transit facilitates easy and affordable access to nearby nature.

On a warm spring morning in April, my partner and I took the train to Lübbenau for the first time after more than a year of living in Berlin. Over the next few months, I returned to the area twice, seeking the same rush I had felt on my first day trip there: a sudden certitude in the superiority of nature over the routines and vices of city life. In other words, a breath of fresh air.

On that first visit, we followed our fellow passengers off the train at the Lübbenau station, feeling sartorially unprepared in our jeans and sneakers, and cut through the town to the kayak rental shop. For visitors to the area, Lübbenau — like other Spreewald towns, such as Lübben and Burg — serves a primarily utilitarian purpose: a place to rent kayaks and bikes, or book accommodations and tours.

Lübbenau also provides a chance to stock up on local specialties like horseradish, linseed oil and Spreewald gherkins, a pickle so prized that it basks in the same European Union product protection granted to Champagne and Parmigiano-Reggiano. (During a later trip in May, I spent a night in Lübbenau in the top bunk of a cabin designed to resemble a pickle barrel.)

This year, the towns in the region are commemorating “Fontanejahr”: a yearlong celebration of the 200th birthday of the Prussian writer Theodor Fontane, whose travelogues, written in the latter half of the 19th century, extolled Spreewald for its unspoiled character and natural beauty.

Lübbenau itself is subdued, slow-paced and, like all German holiday villages worth their salt, features a castle. (Lübbenau’s is more Austen than Grimm.) Downtown, tourists strolled cobblestone streets or sat at cafes, nursing ice creams or pilsner or both. The more ambitious visitors passed us on our way to the kayak rental shop, wafting a trail of mosquito repellent in their wake.

After stepping unsteadily into our royal blue, two-seater kayak, we pushed off from the dock. In just a few minutes on the river, we had drifted away from civilization, and Lübbenau’s mild pleasures were replaced by more complicated ones. A few leggy spiders made themselves comfortable near my knees in the shade of the kayak’s thick plastic hull. Crickets whirred under baroque summer clouds, and frogs drowned out the distant roar of planes headed to Berlin’s Schönefeld Airport.

The Spreewald was designated a Unesco-protected biosphere reserve in 1991. The area is home to about 5,000 species of plants and animals — kingfishers, otters, ospreys, river mussels, storks, butterflies, eagles. Its moorland is dotted with birch, alder, pine, willow and linden trees, between which rest hivelike stacks of hay called “Schober,” which make for an iconically Spreewaldian image.

Wildlife to a techno beat

After a soporific Berlin winter, each sign of wildlife brought a particular thrill. We saw hawks, a bevy of swans and a nutria, a semiaquatic rodent easily mistaken for a beaver, splitting green algae with a determined stroke. We spotted dragonflies, fish and a snake slithering on the river’s milky surface. 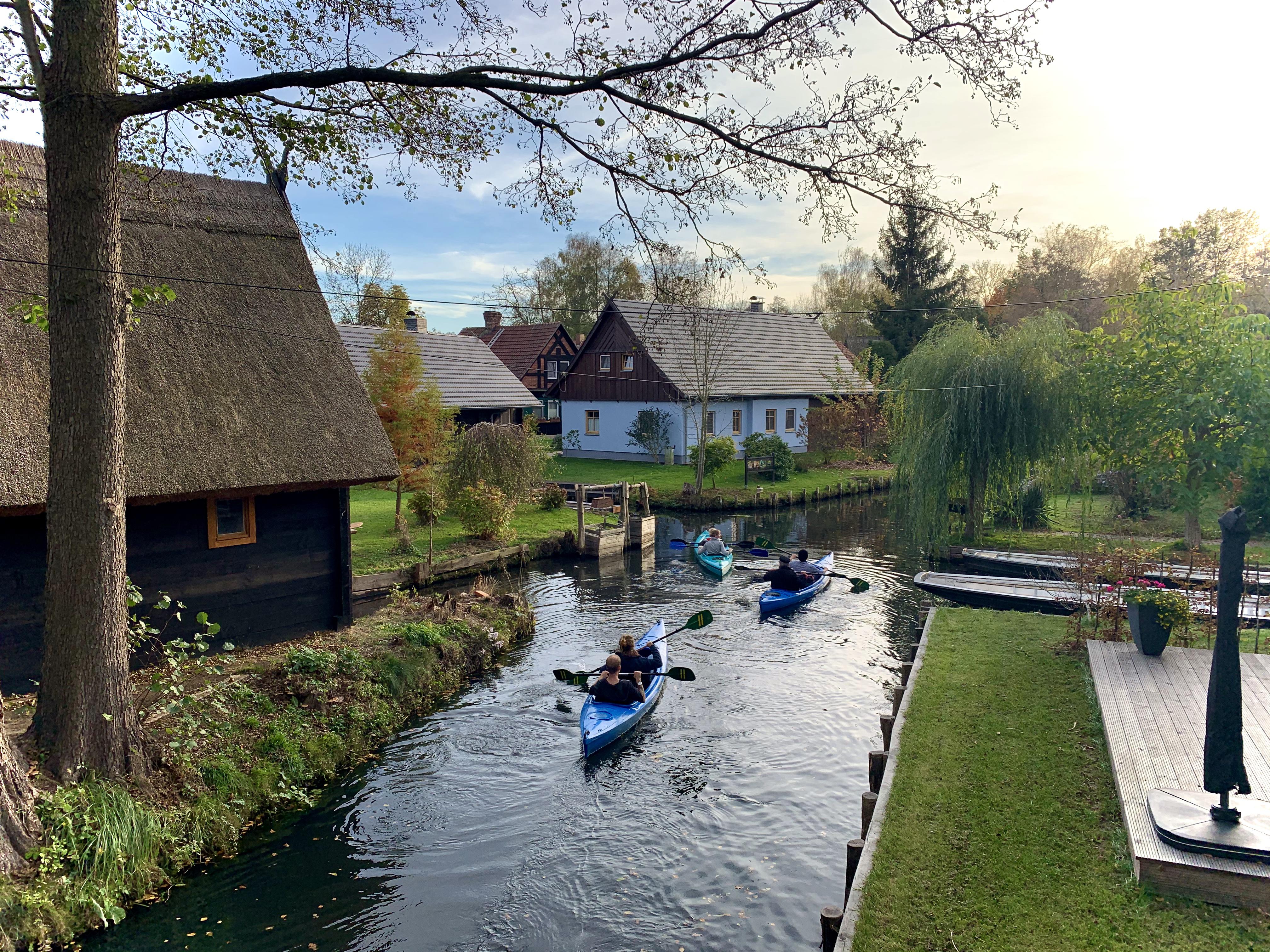 Behind us, a kayak, blasting techno music from a hand-held speaker, was gaining. We escaped into a tributary marked with a wooden sign indicating that it led to Leipe. After a few steady strokes, the thumping bass faded and bird calls once again drowned out all indications of urbanity. Twenty minutes later, we were in Leipe.

Snug inside the Spreewald’s network of waterways are the villages of Lehde and Leipe, with fewer than 300 residents between them. Though both towns are partly accessible by car, many of the houses in Lehde and Leipe are completely cut off from the mainland (save for footbridges) and rest on Kaupen, little sand islands. Leipe offers peaceful, waterside accommodation and a cafe known for its “Hefeplinzen,” blintzes brushed with cinnamon sugar and butter. They are soft and yeasty, and we ate them with cappuccinos topped high with whipped cream. After spiking our blood sugar, we folded our legs back into the boat and turned our plastic vessel toward Lehde.

A short distance from Lübbenau by foot, boat or bike — via a stretch of the 161-mile-long Gurkenradweg (literally: pickle bike path) — visitors stop in Lehde for a pint of the local Babben beer, a meal at the popular restaurant, Kaupen No. 6, or a stroll through the Freilandmuseum Lehde, an open-air local history museum. While visiting Lehde during another trip to the region in May, a commotion on the water made us look up from our glasses of Babben: a Sorbic wedding party was on its way to a ceremony in one of the museum’s historic buildings.

Much of the lore, culture and traditions of the Spreewald come from the Sorbs and the Wends: descendants from Slavic tribes who have been in the region for hundreds of years. Some 60,000 Sorbs and Wends live in Lusatia, a region encompassing sections of both Germany and Poland, and comprise one of Germany’s few recognized minorities. In modern times, Sorbic customs and languages have faded — in part due to pressures to assume a more uniform national identity, and in part, and more gently, through the passage of time. Still, Sorbic culture permeates the area, and more recently the Sorbian language has been reintroduced into local school curriculums. Today, many of the Spreewald’s signs are bilingual: in German and in Sorbian.

We had paddled for more than 20 minutes toward Lehde before we consulted the laminated map the kayak rental company had provided and realized we were lost. Ten minutes after leaving Leipe, we had taken a fork in the river, and since then we hadn’t seen another soul. We were now floating down a watery avenue framed by vines dripping white flowers into the river; a stork flew overhead. 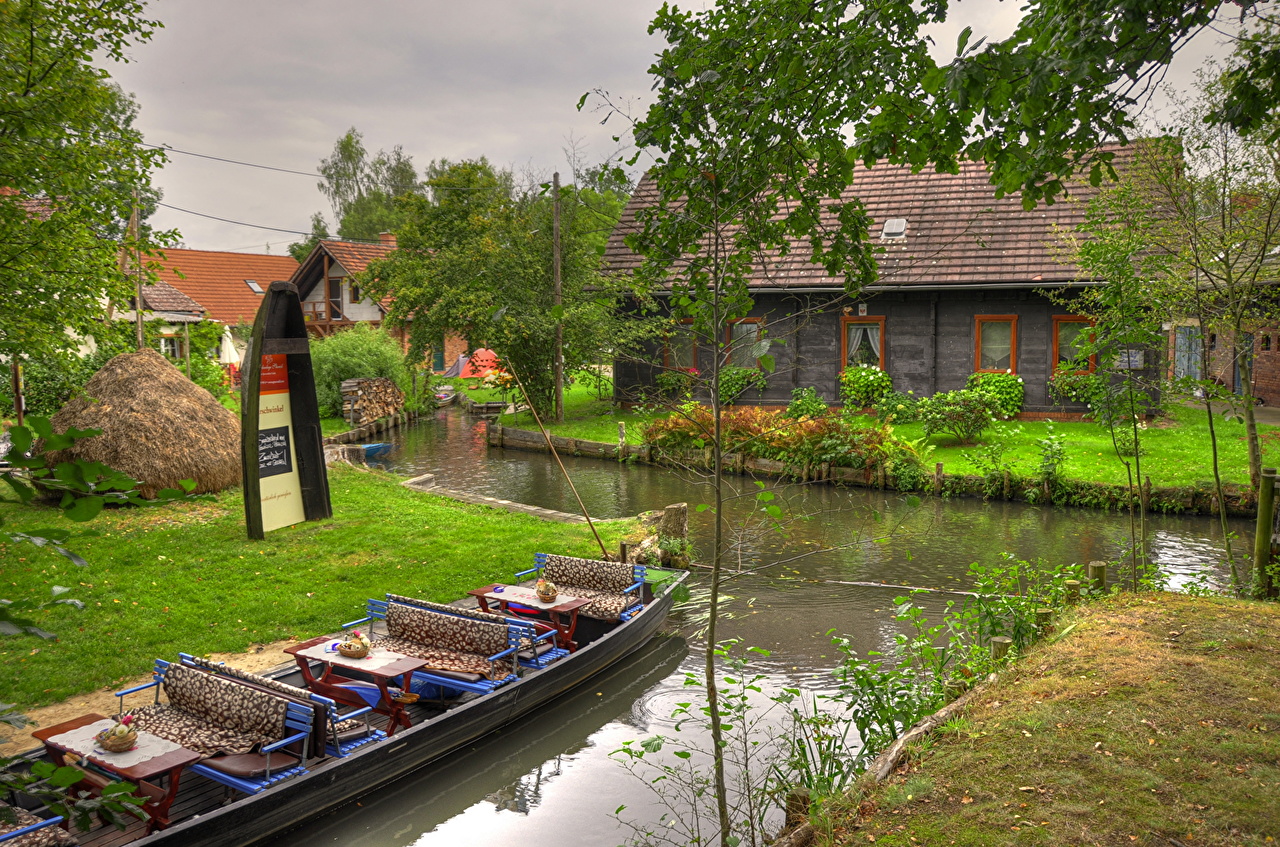 In Spreewald, a kayak seems to impart a sense of delusion to its navigators. Despite our situation, I felt, at the boat’s bow, supremely confident in our navigational abilities. Nothing (and nobody) stood between us and those 800 miles of water — nothing except hunger and German engineering. In the early 1900s, after several centuries of human habitation in the area, an extensive water management system was built in Spreewald. Today, water levels and flow are maintained through an assemblage of weirs, fish passages, dams and locks.

Over the generations, this management system has faced a battery of external challenges — most recently the Europe-wide drought in 2018. But it is mining in the region that has had the most enduring impact. When, for instance, years of heavy rain caused the water collected in nearby open-pit mines to pour into the Spreewald’s tributaries in the early 2010s, iron ochre from the mines’ water turned Spreewald a murky brown: a threat not only to the ecosystem, but also to the health of tourism in the area and, by extension, the livelihoods of the Spreewald’s residents.

The traditions of the Kahns

Like the gondoliers of Venice, the figure that stands as symbol for Spreewald is the Kahn captain. Kahns are punts made, historically, of wood, and propelled through the water with a pole tipped with metal teeth. The profession is a traditional one that often runs through the generations. “It’s a family matter for most people,” explains Steffen Franke, 46, who is the head of Kahnfährgenossenschaft Lübbenau, a professional cooperative for Kahn captains, “so the father naturally likes the son to follow in his footsteps.” 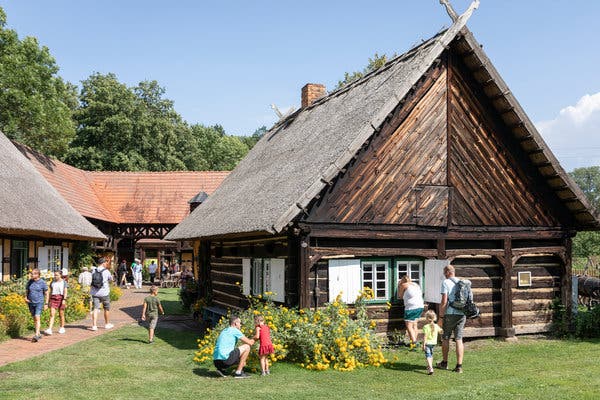 Steffen Bülow, 47, a Lehde local and Kahn captain, learned how to punt when he was 6 years old. It was how he would visit his grandmother’s house, and how his family tended their asparagus crop, more than half a mile from their home. “We had to, even in the summertime, reach the field using the punt at least once, maybe twice a day,” he tells me. By 16, Mr. Bülow became a Kahn captain. Though today it is not his full-time job, as it was his father’s, he still takes the boat out on weekends and holidays. In the towns’ harbors, tourists hire Kahn captains for a less aerobic tour of the waterways, featuring, more often than not, a round of schnapps.

But Kahn boats are not just a way to ferry tourists around; they are also a vital means of transport. Mail is delivered by Kahn. Police patrol by Kahn. Firefighters respond to emergencies by Kahn. Dung, hay and tractors are transported by Kahn.

Every year, Sebastian Kilka, 39, a fifth-generation farmer, and one of Lehde’s last, punts his cattle to and from the pasture. The operation, he says, is generally a smooth one — though animal instincts do sometimes kick in at inopportune moments. “I had problems this year,” he said with a laugh, “because my big bull said, ‘I don’t want to go boating anymore.’” It took the encouragement of six or seven men before the bull complied.

Eventually, my partner and I found our location on the laminated map, just as our thirst bettered our sense of unbridled freedom. We had drifted away from our destination of Lehde but were nearing another stop, recommended to us by the kayak rental manager. So half an hour later, we parked our boat on the banks of Wotschofska, an island home to its eponymous Gasthaus.

Like many of the Gasthauses in the Spreewald, Wotschofska is a combination hotel and restaurant. And like most every local establishment, their menu is a variation on a theme: blood sausage (Grützwurst), potatoes served with quark and dribbled with linseed oil, and, in late spring and early summer, white asparagus, engorged on salt water and blanketed in hollandaise sauce.

We sat on folding beach chairs in the sun to watch the traffic of Kahns and kayaks. Everyone, even those with small children, appeared to be in a genuinely good mood. Many of them, like ourselves, were probably destined for a late afternoon train back to the city, away from this waterlogged fairy-tale world where restaurants have kayak parking lots and mail is delivered by boat. When our drinks ran dry, we stretched our sore shoulders, and slid into our kayak and back out into the water.

Quedlinburg, Germany: A Charming German Village With an Interesting History