THIS is the moment a protective mother elephant f.o.u.g.h.t off a pack of savage
hyenas attacking her calf. 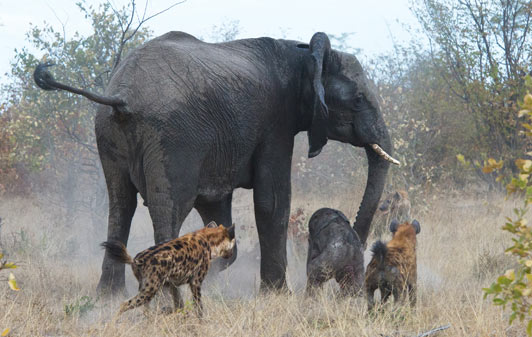 The distressed youngster was photographed cowering under its mother as the snarling beasts continued to circle.

A startled safari group – alerted to the sound of shrieking elephants –witnessed the furious mum s.t.a.m.p.e.d.e the snarling pack, repeatedly kicking out her feet and swinging her trunk to disperse them.

Several trees were left uprooted in her wake. 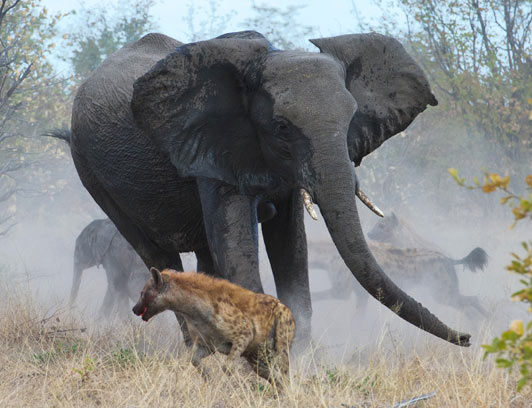 The brutal confrontation took place in the Linyanti bush, Botswana and began when 18 hyenas surrounded two female elephants and their babies before a smaller group managed to separate one of the calves.

While the mother charged them, the larger pack pounced on the lone baby and proceeded to b.i.t.e and c.l.a.w at it whilst jumping on its back.

Guide James Weis, of the tour company Eyes of Africa, witnessed the a.n.g.r.y elephant’s mothering instinct kick in as it leaped to the defense of its
child.

James, 50, recalls “It wasn’t alone for more than 10 seconds when the mother returned and was even more a.n.g.r.y. 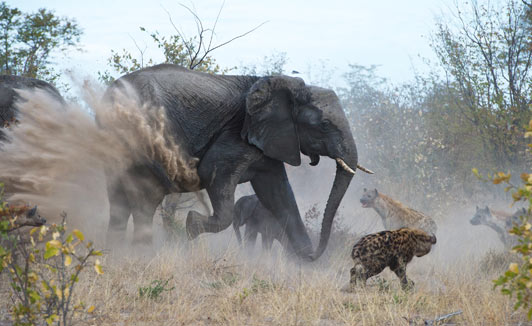 They were playing a dangerous game because had one hyena got in the way of her it would have been flung through the air like a beanbag.

She charged after the pack and was knocking over trees like they were matchsticks and the hyenas fled and scattered in a cloud of dust kicked up
by the mother.”

Despite losing its tail, the baby elephant lived to fight another day.

Mom And Kids Couple for you and your baby with a good price :