Startled holidaymakers got a bit more than they bargained for when a cheeky elephant nearly toppled their jeep.

The curious animal thrust its head inside the car’s window to look for food but got its trunk and tusks caught – completely blocking the vehicle from moving.

As the panicked driver tried to speed away, the fearful passengers stopped taking selfies and one man leaped out of the side of the jeep to escape the elephant’s trunk. 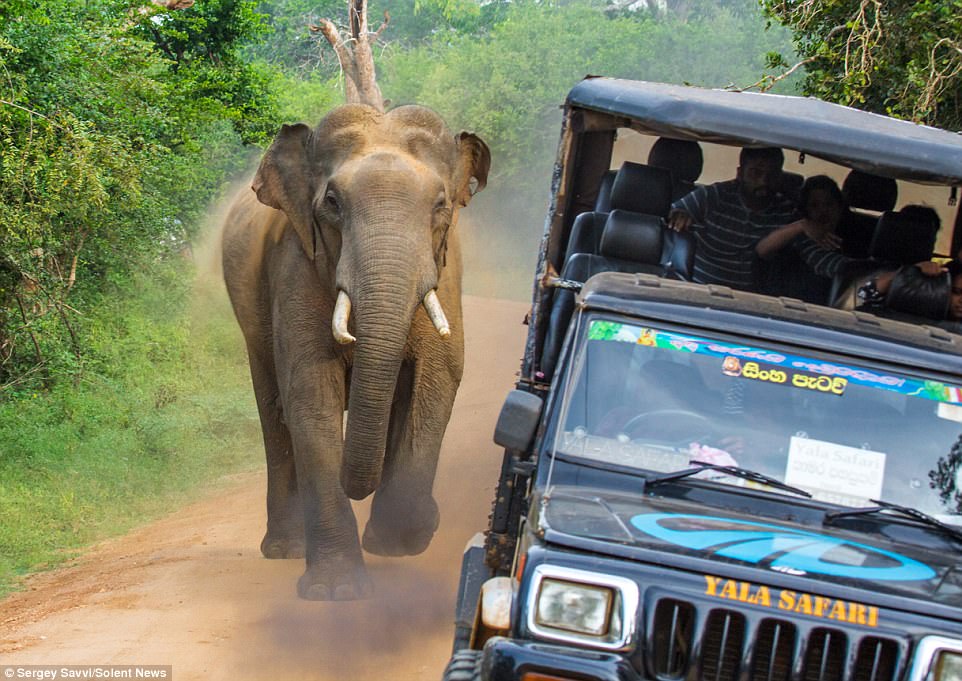 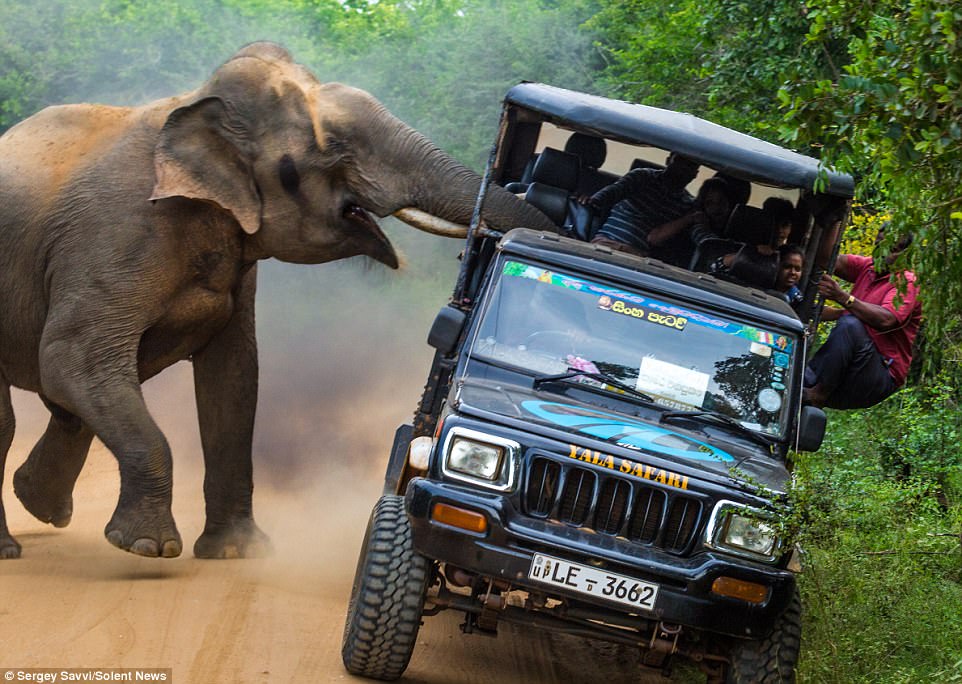 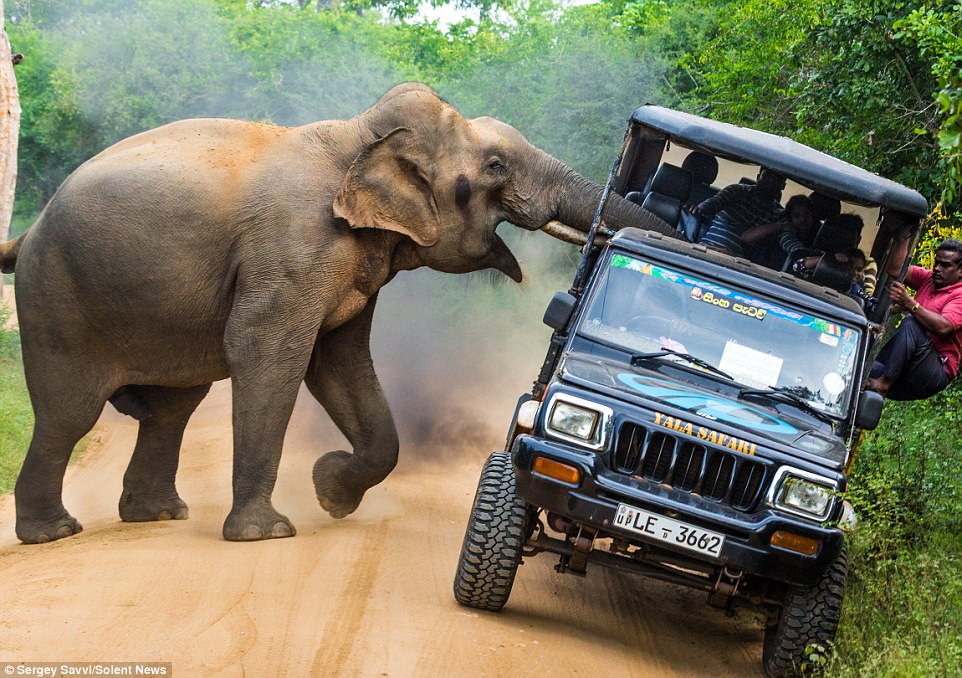 The terrifying close call was captured by Russian wildlife photographer Sergey Savvi, 37, who was on safari in Sri Lanka’s Yala National Park with his wife Julia.

He said: ‘It was terrifying and amazing at the same time.

‘The elephant was screaming like mad, making clouds of dust with its legs and shaking the jeep quite easily as it wasn’t a heavy vehicle full of people.

‘For a moment, I thought the elephant would turn the jeep right over!’

Mr. Savvi had stopped to take pictures of the male elephant, which was the biggest he had seen in the safari park.

He said: ‘He was looking calm and friendly, just eating grass and leaves from trees near the road. Then most likely it saw some food inside the jeep. 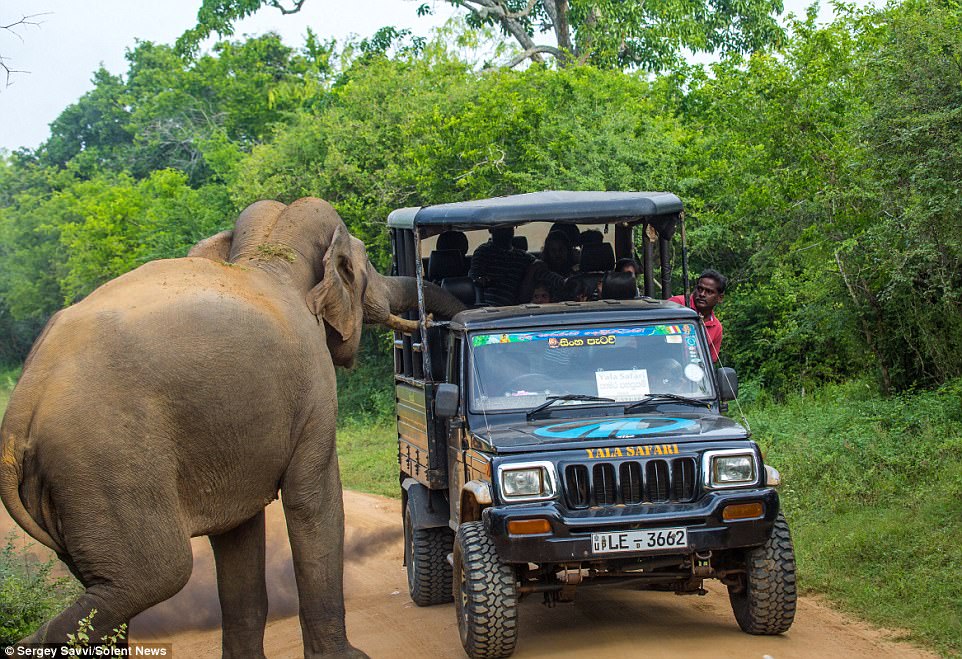 The curious creature thrust its trunk in to look for food which Mr. Savvi believes it saw as the vehicle went by 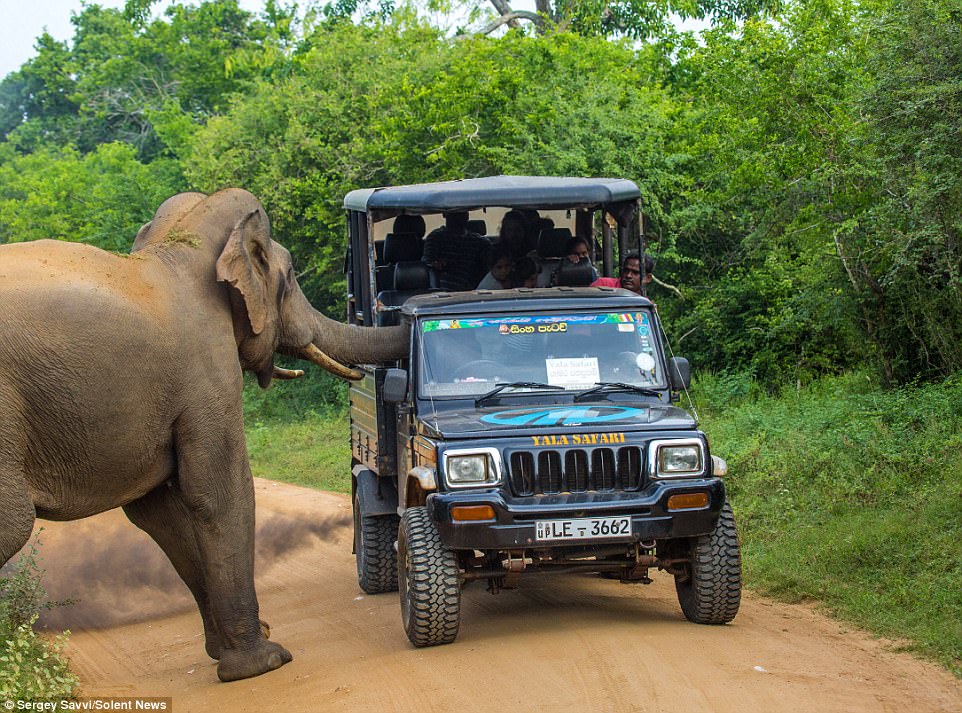 ‘The driver should have moved the jeep away immediately as he saw the elephant was interested but he didn’t. All the people inside continued taking pictures and selfies.

‘When the elephant put his head inside the driver’s cabin it was too late to move away – the jeep was blocked by his head and tusks.

‘After a few seconds, the elephant shifted his attention to the passenger cabin. It was looking very angry now.’

Eventually, the jeep managed to escape and the ‘screaming and crying’ occupants, a group of locals from Sri Lanka, were unhurt. 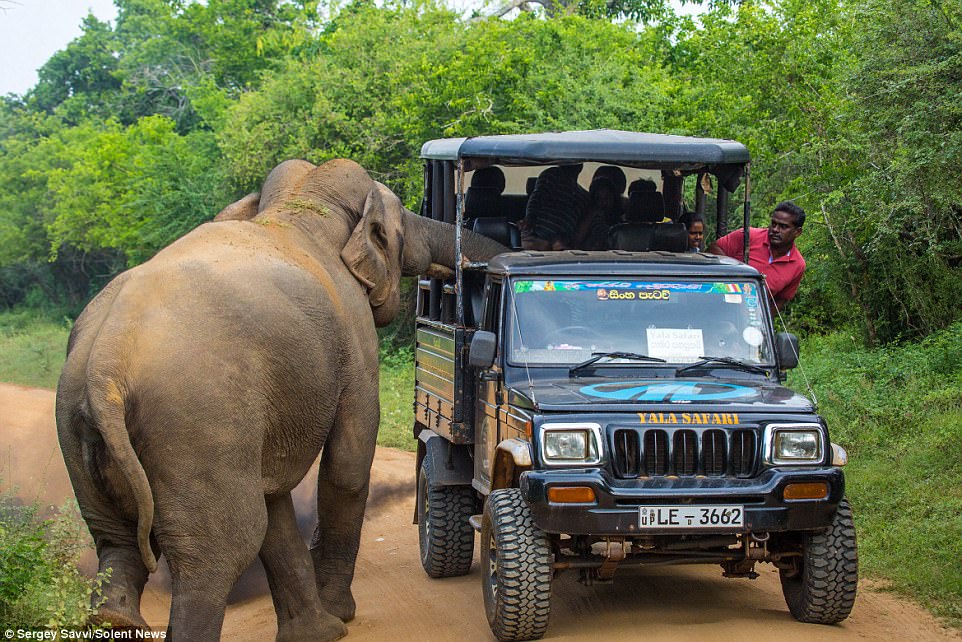 The animal then lodged his trunk and tusks inside the jeep, meaning it was unable to move for a while 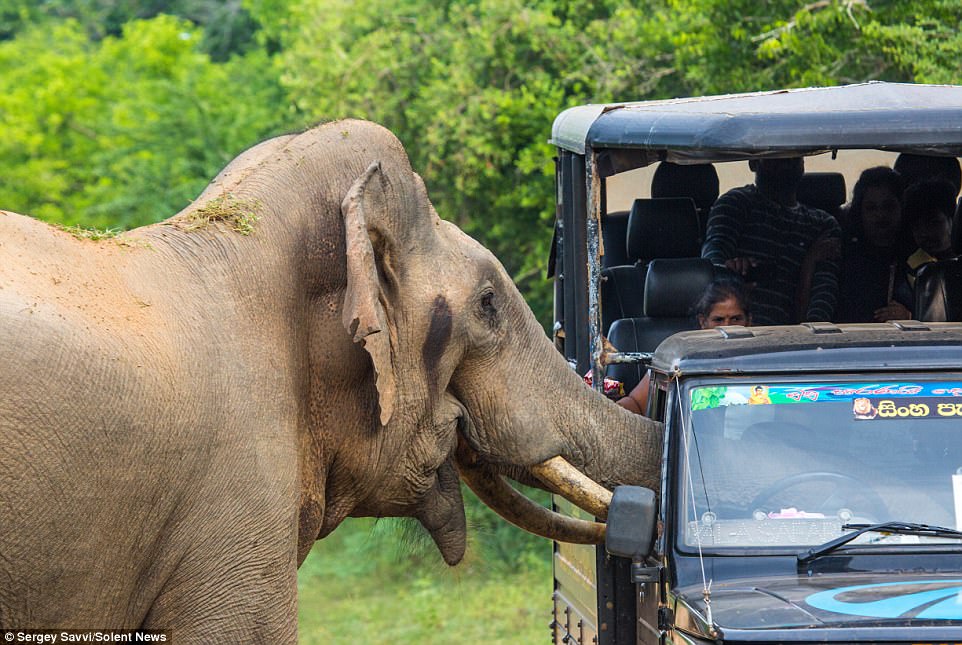 The occupants of the vehicle, who were were a party of locals, were left shaken but unhurt by the elephant’s intrusion

Mr. Savvi, a former financial manager at a publishing house from St Petersburg, Russia, later bumped into some of the occupants of the jeep.

He said: ‘During a lunch stop when most of the jeeps stop in an area where people can get out of cars and have a rest, I talked to a man who was inside the attacked jeep with his family.

‘He said they were all okay, everybody had calmed down a bit after the shocking event and they even smiled when I showed them my photos of their “elephant adventure”.’

The elephant was an Asian elephant, which is the continent’s largest mammal.

The average male is nine feet tall and can weigh as much as five tons.

The Sri Lankan elephant is an endangered species, with an estimated population of just 3,000.

The elephant is protected under Sri Lankan law and killing one carries the death penalty.

An elephant doesn’t forget… how to climb a fence: Animals have learned how to avoid barbed wire and even electric shocks