No trip to the UK is complete without a stop-off in Scotland, home to Edinburgh’s Royal Mile, Scotch Whiskey, Loch Ness (and its monster), and endless, glorious landscapes. While the UK has one of the densest rail networks anywhere in the world, we think there’s no better way to explore Scotland than by road. This is especially true if you’re planning on heading to those parts of the country – including its many island groups and the North Coast 500 route – that the railways simply don’t reach.

And while organized tours certainly have their place, we love the freedom and opportunities that self-drives offer. But should you be worried about having to drive on the ‘wrong side of the road? And what else should you know before driving in Scotland? Read on to discover all the inside info you need to know! No – you don’t need prior driving experience in Scotland to tackle a road trip.

What Do You Need To Drive In Scotland? 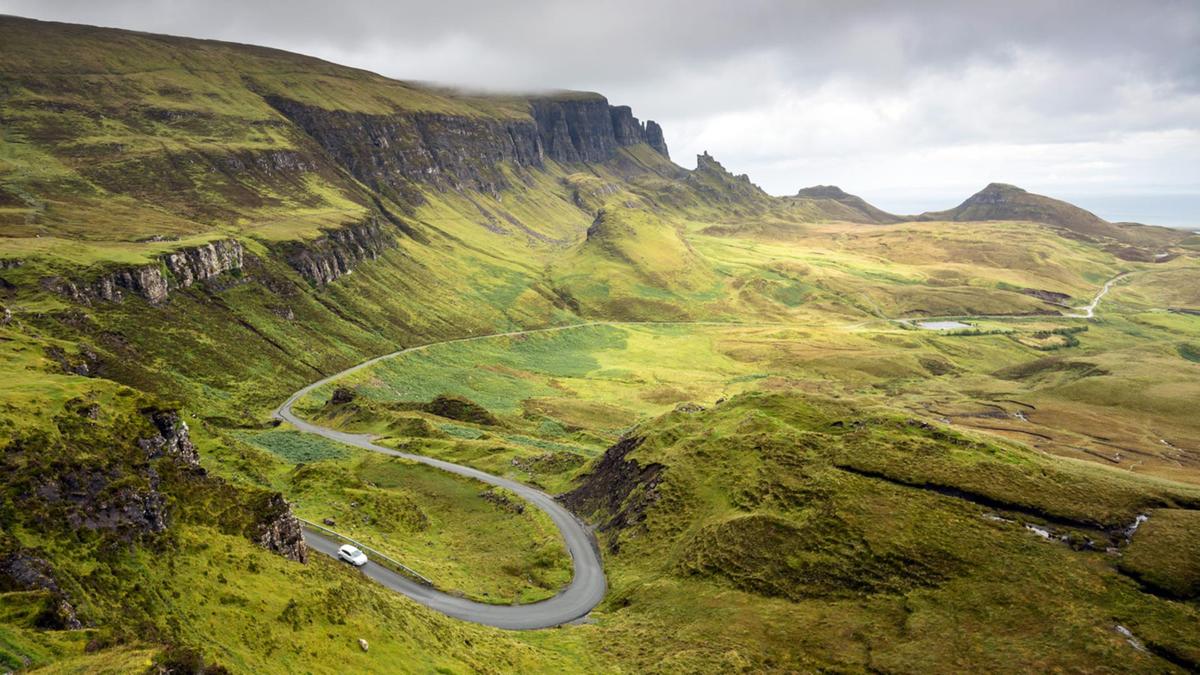 Good news! Visitors to Scotland can drive for up to one calendar year with a standard US driving license. If you can drive a car in the US, you can drive the same type of car in Scotland too!

The only other thing you need to drive in Scotland is insurance, which is a legal requirement. If using the car of a friend or family member, they will need third-party insurance (allowing anyone to drive their vehicle), while rental cars will come with their own insurance policies. Simple!

It’s also a legal requirement in Scotland to wear a seat belt/safety belt at all times, irrespective of whether you are the driver or a passenger. The police are authorized to fine anyone who isn’t wearing a seat belt, and if you don’t pay in the allotted time, a warrant can be issued for your arrest. There is no statute of limitation on this warrant, so any return visit to the UK (or presently any EU nation) could land you with a visit from the police – and an even heftier fine.

Where Do You Rent A Car In Scotland? 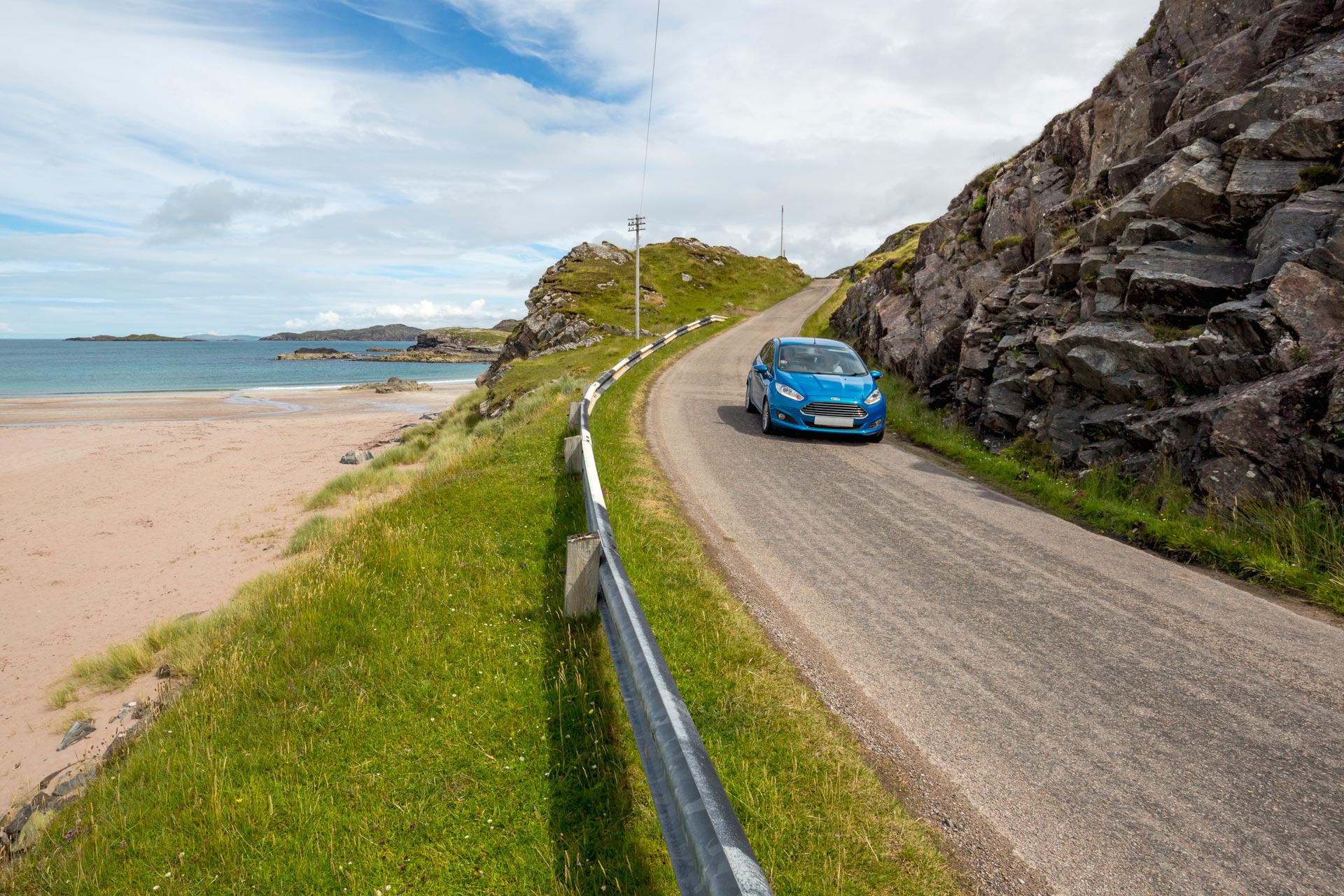 Search online before you arrive to Scotland for the best car rental deals. I generally like to check comparison sites so I can get the best prices. My favorites to look at are:

Cell Phones And Driving In Scotland

Fines are also given out to those who use their cell phones when driving. It is only permitted to receive calls if you are using a hands-free kit that doesn’t require you to take your hands from the wheel. Even so, we’d strongly recommend avoiding using your cell at all when driving, since you’ll be traveling along roads that are new to you. If you plan to use your cell phone as a navigation aid, you will need to find a way of placing it securely on the windscreen or have someone look after it for you. We recommend a good car dash holder.

Drive On The Left In Scotland 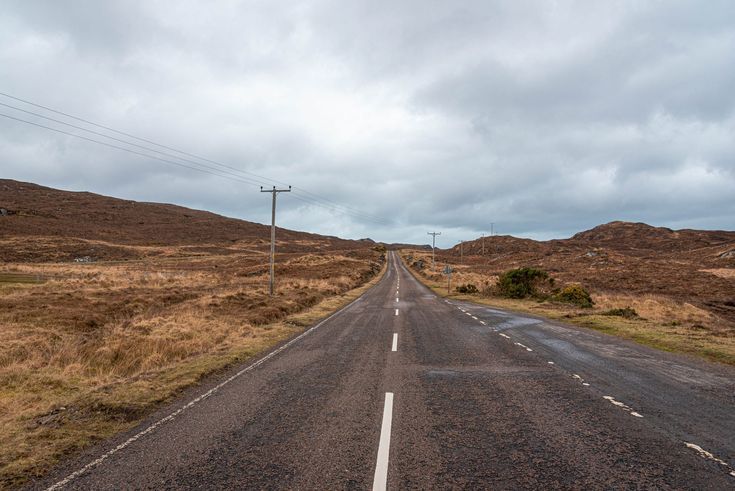 When you go on on a Scotland drive you’ll have to understand you must drive on the left. All four countries that make up the UK (Scotland, England, Wales, and Northern Ireland) drive on the left-hand side of the road – unlike the US and most of continental Europe. We found it surprisingly easy to adapt to the change, perhaps because everything inside the vehicle is ‘reversed’ too. But watch out on quiet roads or when approaching roundabouts or other junctions; it’s easy to relapse into what you’re used to doing at home!

You’ll find the steering wheel on the right-hand side of the vehicle and the gear shift in manual transmission cars on the driver’s left, alongside the parking brake. However, the order of the pedals remains the same as in the US: namely clutch (for manual vehicles), foot brake, and gas pedal, from left to right. (The gas pedal is usually known as the accelerator pedal, and the trunk is known as the boot.)

Make sure you’re satisfied with your vehicle before you set off on any journey. You’ll already be slightly more nervous than normal about driving on the other side of the road, and you don’t want to make things more stressful by not being able to find what you need later on.

Most vehicles in Scotland are manual transmission, meaning you’ll need to shift gears yourself. If you’re renting a car and not confident using a manual, automatics are available. Make sure you make your need for an automatic clear at the time of booking.

As a mental checklist, ask if you know how to operate the headlights, indicator lights, and hazard lights. Also make sure you know how to engage reverse gear, which can require pushing down a button or similar, which isn’t always immediately apparent.

While it’s also worth knowing where the vehicle’s horn is, drivers in Scotland use their horn only sparingly when it is absolutely necessary to avoid an accident or draw attention to something urgently.

Distances And Speeds To Know When You Drive Scotland 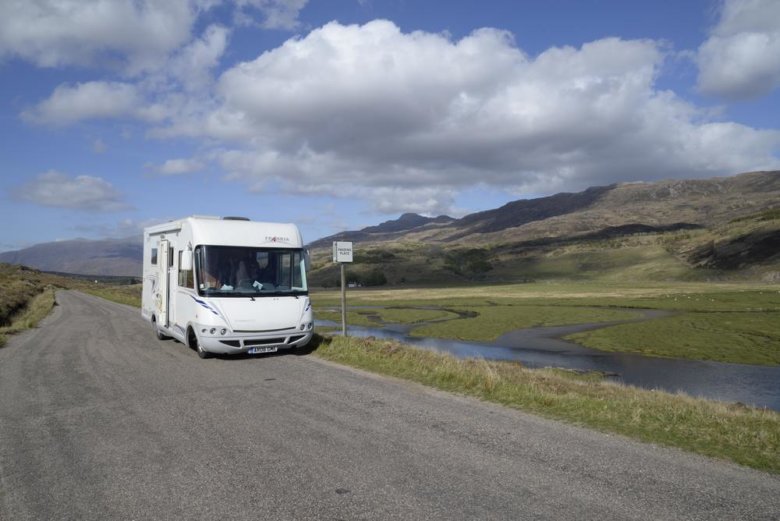 Distances and speeds are measured in miles, just like in the US. The speed limit is usually signposted on each new stretch of road or change in speed. Look out for round white signs with a red edge and a number in the center.

If in doubt about the speed of a particular stretch of road, you can use the following basic rules: motorways – the Scottish equivalent of highways – are denoted by an M. For instance, the M8 runs between Edinburgh and Glasgow. All motorways have a maximum speed limit of 70 mph, although over-road signage may reduce this given traffic or weather conditions. They are colored blue on maps and road signs.

The same speed limit is in force for dual carriageways (mini two-lane highways). Outside of built-up areas, the speed limit is generally 50 mph, while in more urban areas (anywhere with street lighting), the maximum speed is typically 30 mph – although around schools it can be as low as 20 mph.

Some rural roads may be single lanes (and roads tend to be quite narrow compared to those in the US in any case). There will generally be passing places that allow cars to pull aside to allow vehicles coming in the opposite direction to pass. (Speaking of which, don’t park in passing places – only ever use dedicated parking spaces.)

Speed limits are limits, not targets; only drive as fast as feels safe. Try not to worry if locals who know the roads better than you pass you at a safe place on the road.

Cars in Scotland can use either gas (known as petrol) or diesel. Definitely don’t get these confused! Rental cars will often have a sticker beside the filler cap of the fuel tank to remind you, but not always, so never assume.

Although gas stations are called petrol stations, they sell both gas and diesel. Unlike in the US, if you see a gas station, you can be sure they sell diesel too. All gas is now unleaded, with green pump handles, while diesel pumps are colored black.

Gas stations are pretty easy to find and look much the same as those in the US. Many in town and city centers, such as in Edinburgh or Glasgow, are open 24 hours a day. Elsewhere, they will be open from early morning until late at night. In more rural areas, gas stations are less numerous, so it’s wise to fill up when you see one. Those in the countryside also tend to be locally-run rather than operated by large gas companies, but this does not affect the quality of the fuel. You’ll pay the highest prices on highways.

Fuel is significantly more expensive than in the US – try not to look shocked! At the time of writing it’s about £1.28/liter. Unlike in the US, fuel is sold by the liter. You can fill up your tank entirely or fill up to a certain price or volume by eye. Gas pumps are mostly self-service: drive up, fill your tank, and then pay. You’ll need to go inside to pay; just tell the cashier the pump number or point through the window.

Parking And Other Costs Of Driving In Scotland

Finding a parking space in a busy city center at peak times can be a bit of a trial for everyone. Parking areas on the road itself can be identified by bays marked out on the road surface with white paint. You’ll need to make sure all four wheels of your vehicle are inside the bay, and it’s considered polite to avoid using a bay that is too small for your car, even if all four wheels are squeezed in. Towns and cities will often have signposted car parks and multi-story car parks.

Whether parking spaces are free to use or require a ticket is down to individual councils. Privately-operated public car parks (the largest operator of which is NCP) are sadly never free.

Having parked up in a bay, you will need to buy a ticket from a meter/machine. Some will make you pay for a certain length of time, while others will provide you with a barcoded/time-stamped ticket with the cost calculated when you plan to leave the space. Parking in hotels (if you’re a guest), and at tourist sights can sometimes be free, but in the city centers, you’ll probably have to pay for a car park even at your hotel. The average cost is £20/night. Outside of the major towns and cities, where credit cards might be accepted, expect to have to pay for parking with coins in British pounds sterling.

Driving In Scotland In The Winter 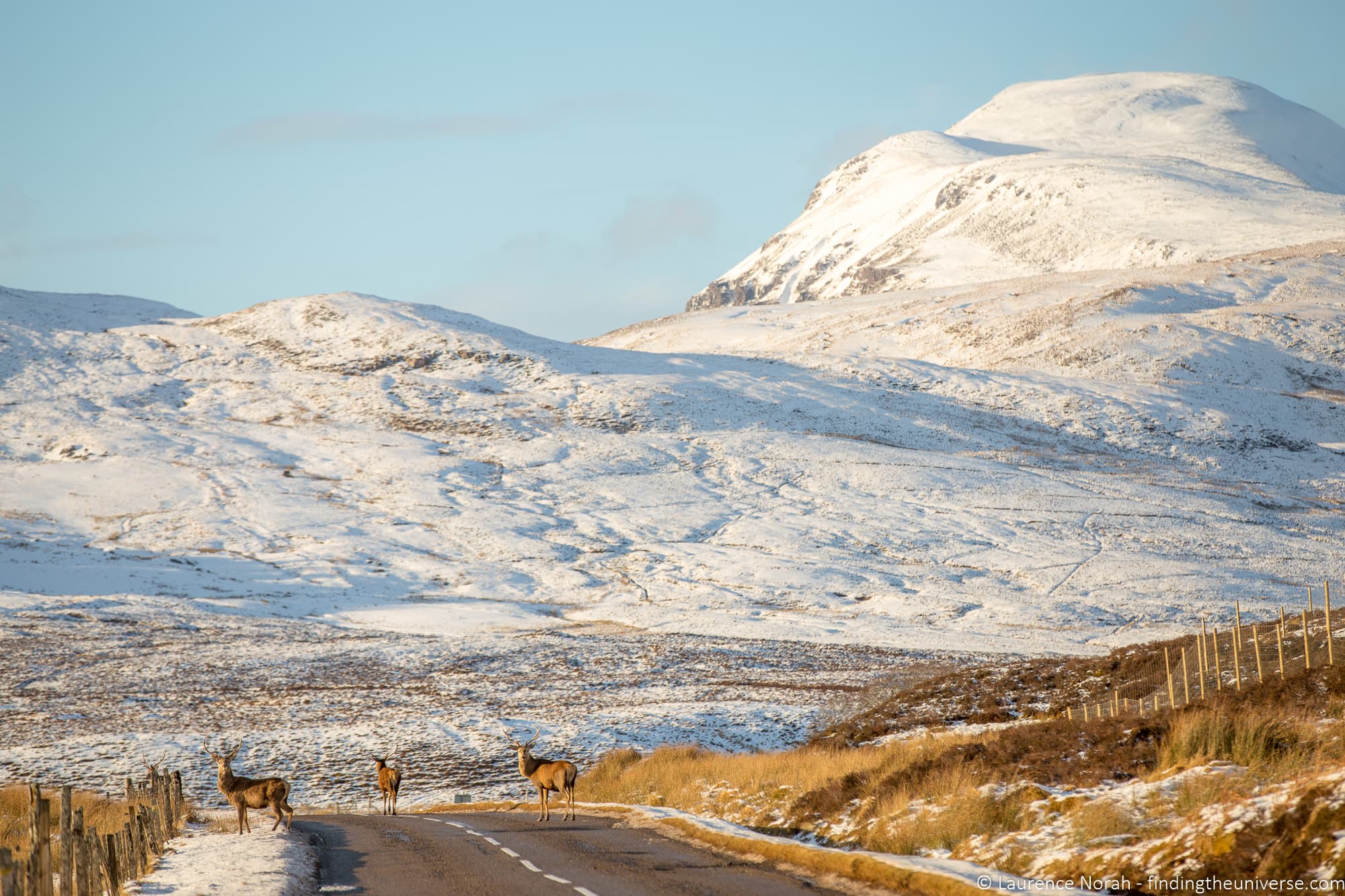 Scotland is not immune to snowfall; it snows for about 15 to 20 days during the winter months of December to February. That said, snowfall is normally nowhere near what you might be used to in Alaska or even New York, and rarely affects road travel for long.

Long winter nights (when the sun can set as early as 3 pm) and foggy days are much more of a hazard. The best advice is to drive extra carefully at these times, and if you are scared or hesitant, avoid long road trips.

Are You Planning On Crossing Into England?

Should you be planning to cross into England at any point, you can do this without issue; there are no customs or immigration checks between the two countries. If you miss the road sign welcoming you to either country, you won’t even realize you’ve crossed a national border!

Don’t Drive In The Bus Lanes

Do not drive in dedicated bus lanes that can be found in towns and cities, and avoid coming to a stop in yellow cross-hatch areas, which demark areas of congestion that should be kept clear at all times.

Watch Out For The Highland Cows!

Plenty of sheep, cows, and even deer roam the Scottish countryside so mind your speed and give these animals the space they deserve. You might come across a few of them in the road!

That’s it; we told you it was simple! From distances and speeds to fuel and parking considerations, we’ve given you all our tips on driving in Scotland. What else can we say but have a great time!

Where should we go to drink coffee in Edinburgh, Scotland?