THIS baby elephant is trying to forget her fear of water as she learns to walk again after losing part of her foot.

The nervous six-month-old grabbed a keeper for support as she was lowered into the pool at an animal hospital in Chonburi, Thailand. 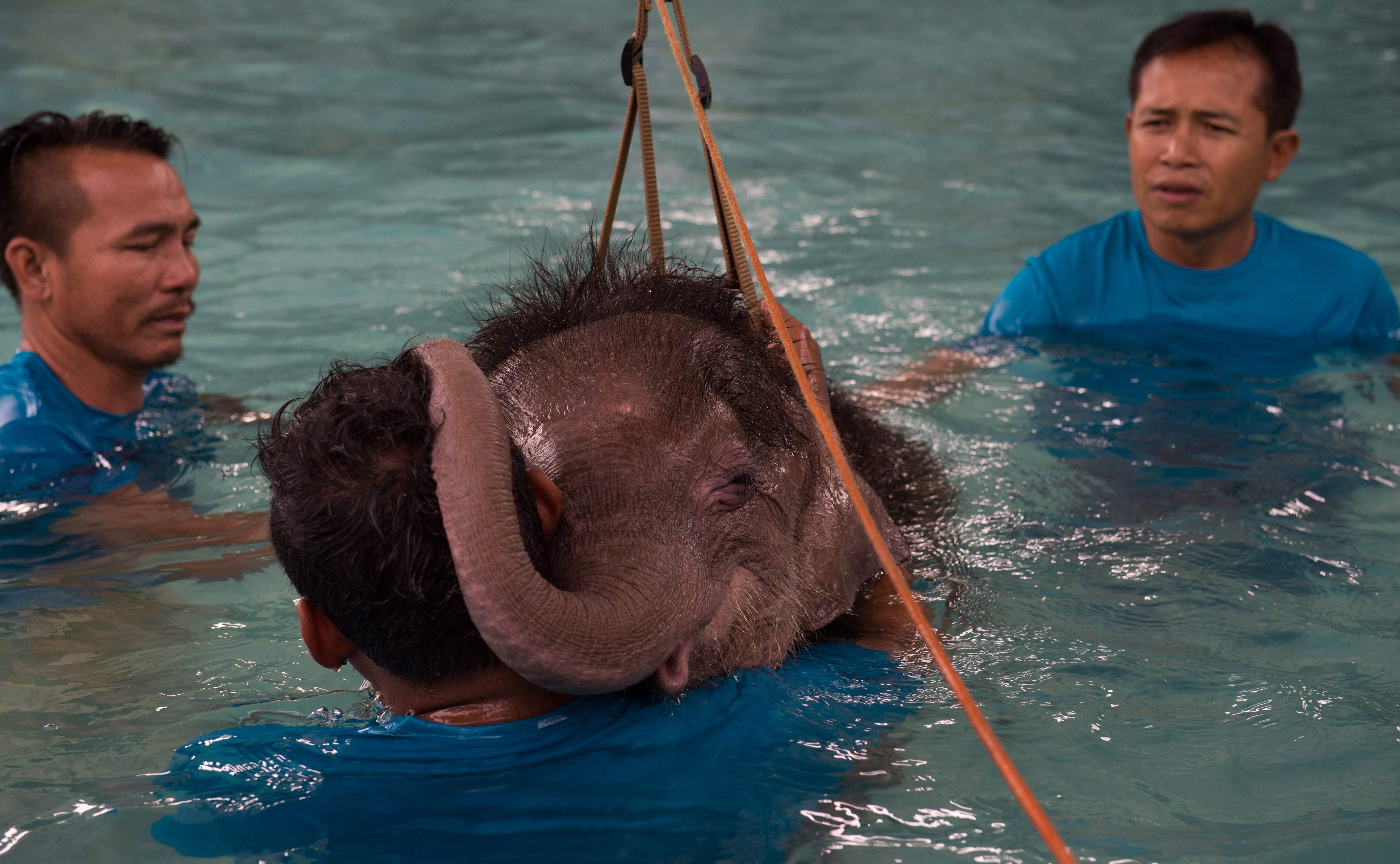 A baby elephant named Clear Sky is learning to walk again in a swimming pool after she injured her foot credit: Getty Images 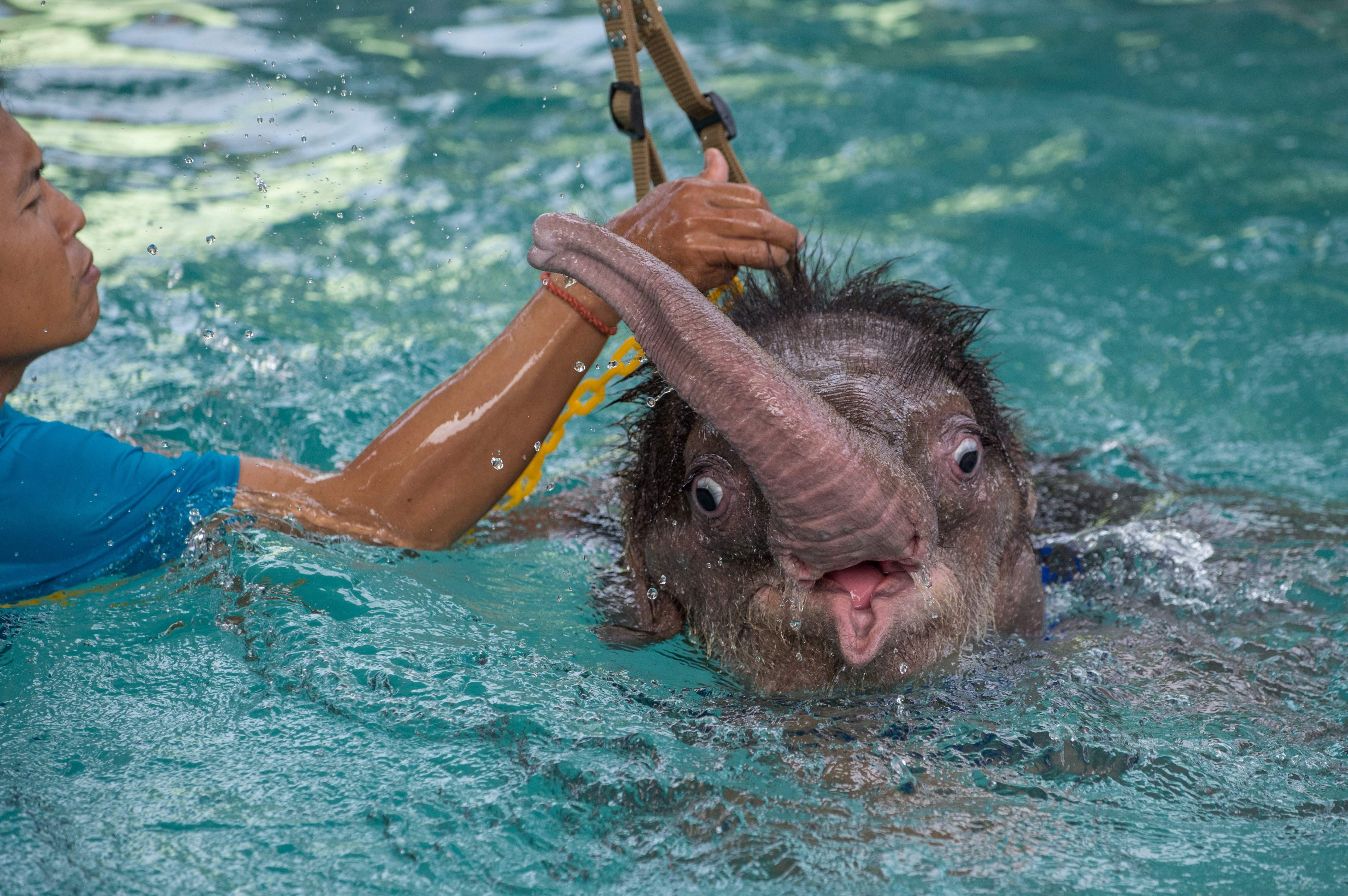 The six-month-old is the first elephant to receive hydrotherapy at the Nong Nooch Tropical Garden animal hospital in Thailand Credit: Getty Images 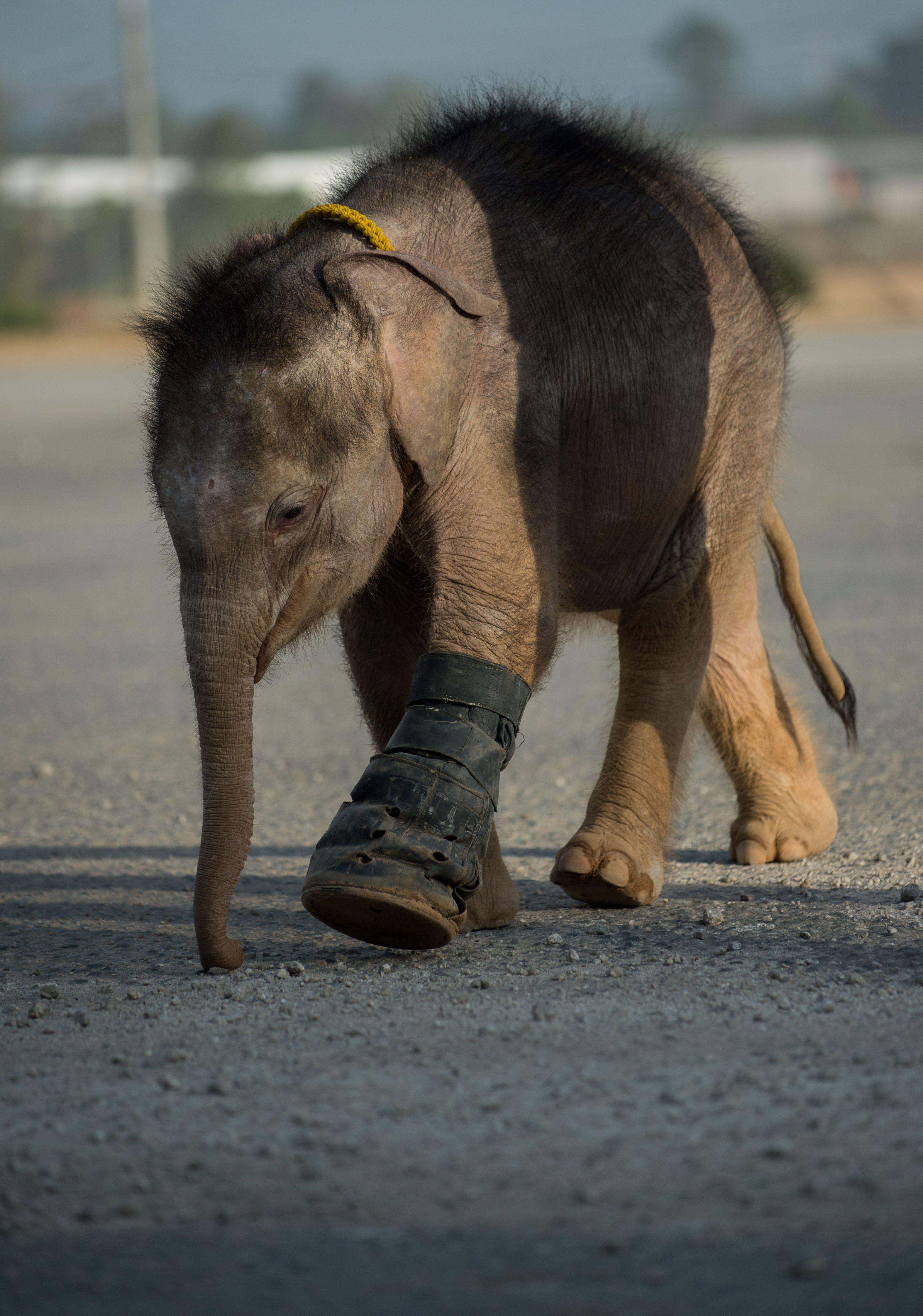 Clear Sky, an orphan, caught her leg in an animal trap laid by villagers to protect their crops credit: Getty Images 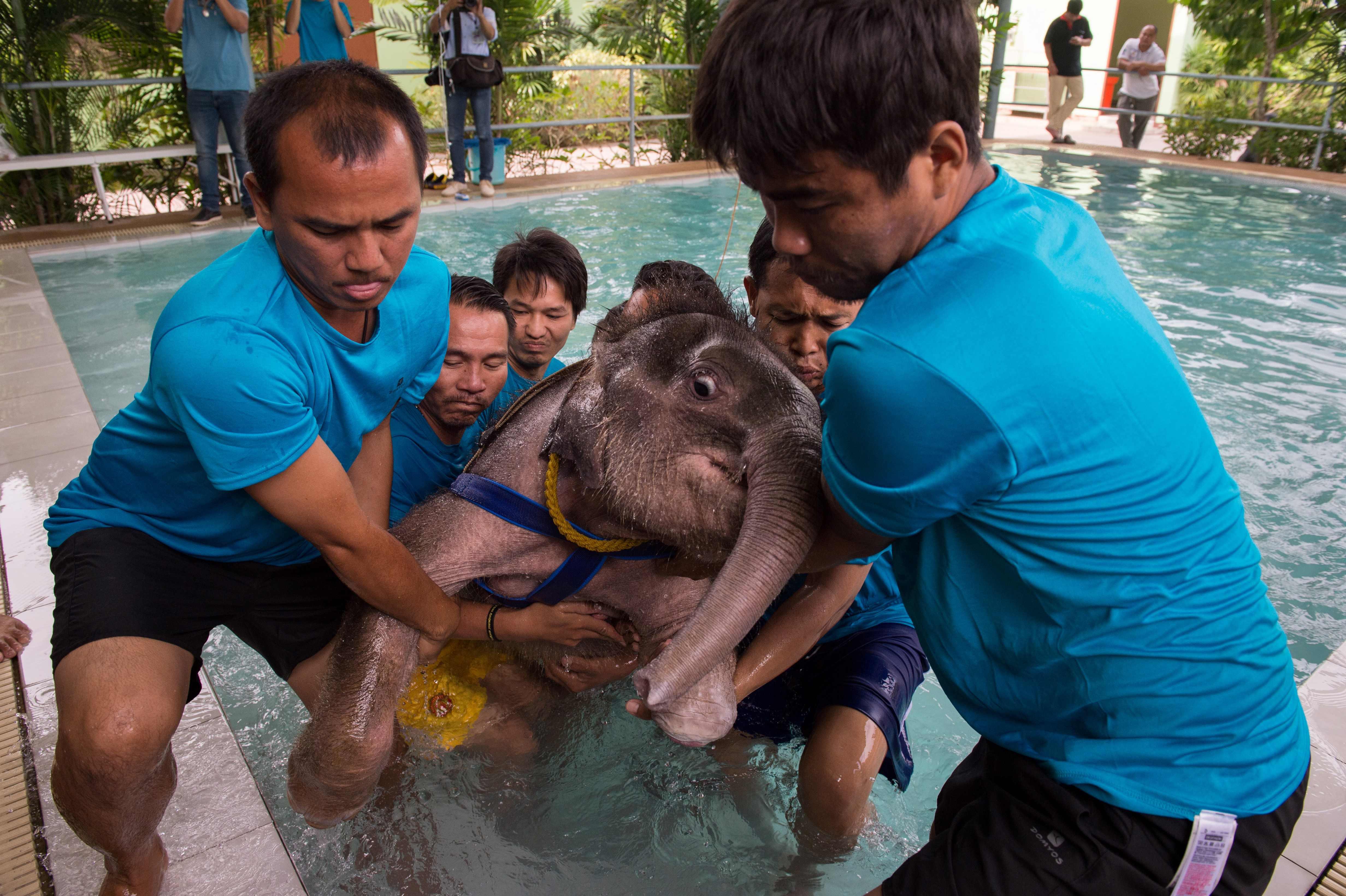 Staff at the animal hospital are trying to help her strengthen her withered leg muscle credit: Getty Images

Orphaned Clear Sky, who later seemed to enjoy herself, is the first elephant to receive hydrotherapy at the Nong Nooch Tropical Garden.

She was injured in a snare set by villagers protecting their crops.

After surgery she is now having treatment to strengthen her leg muscles. 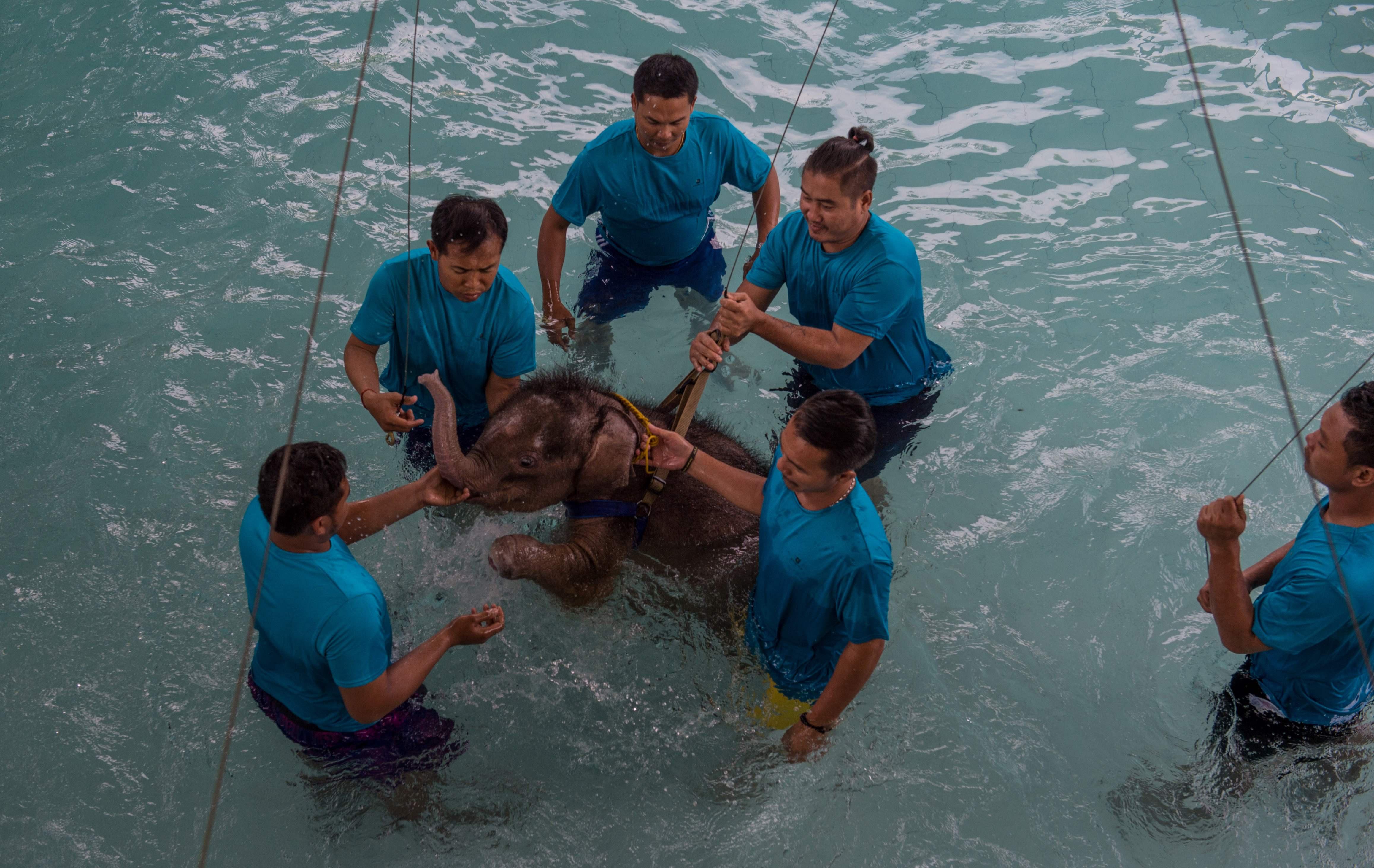 Staffers use a harness to help Clear Sky into the water and keep her float credit: Getty Images 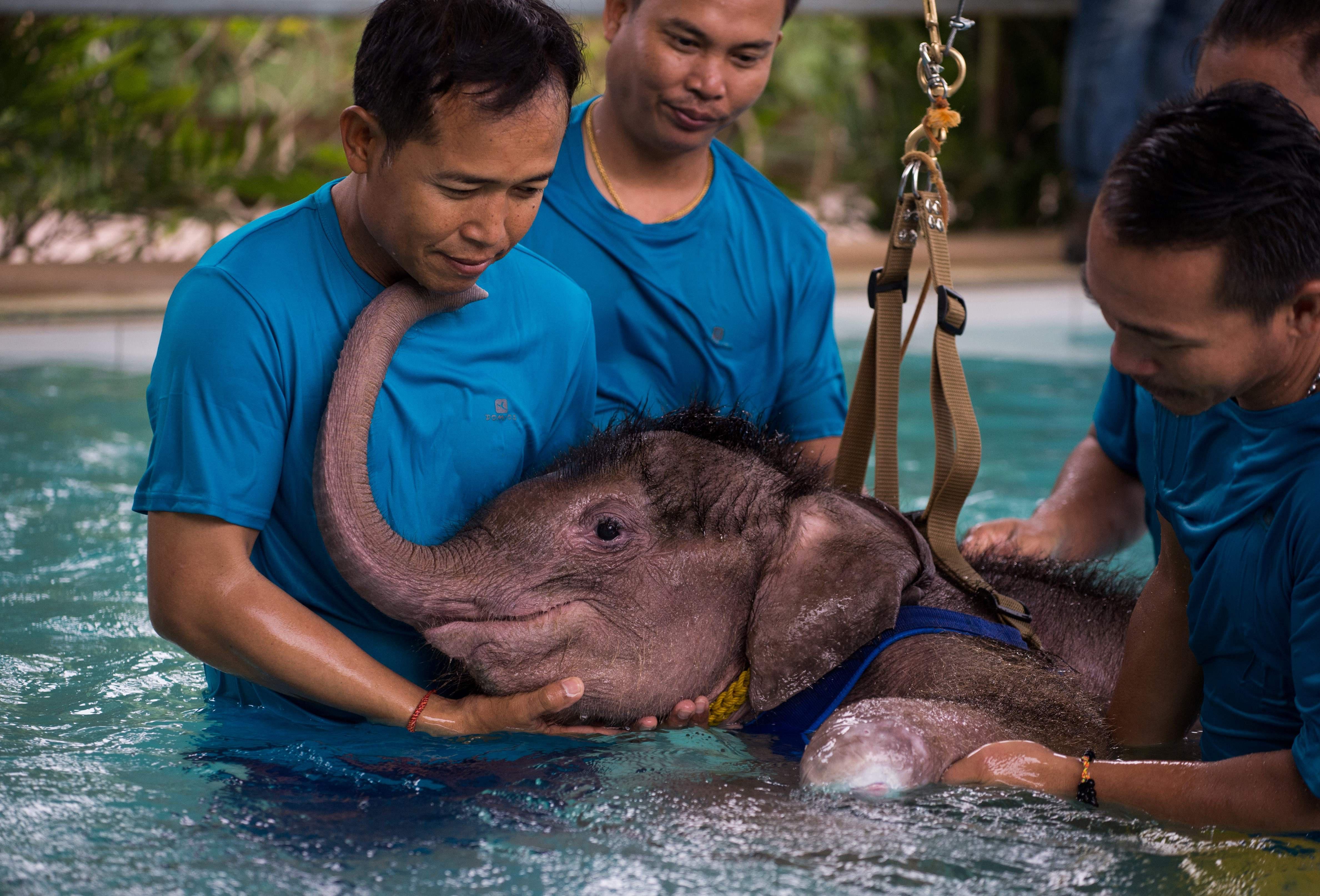 This was her second time getting water therapy credit: Getty Images 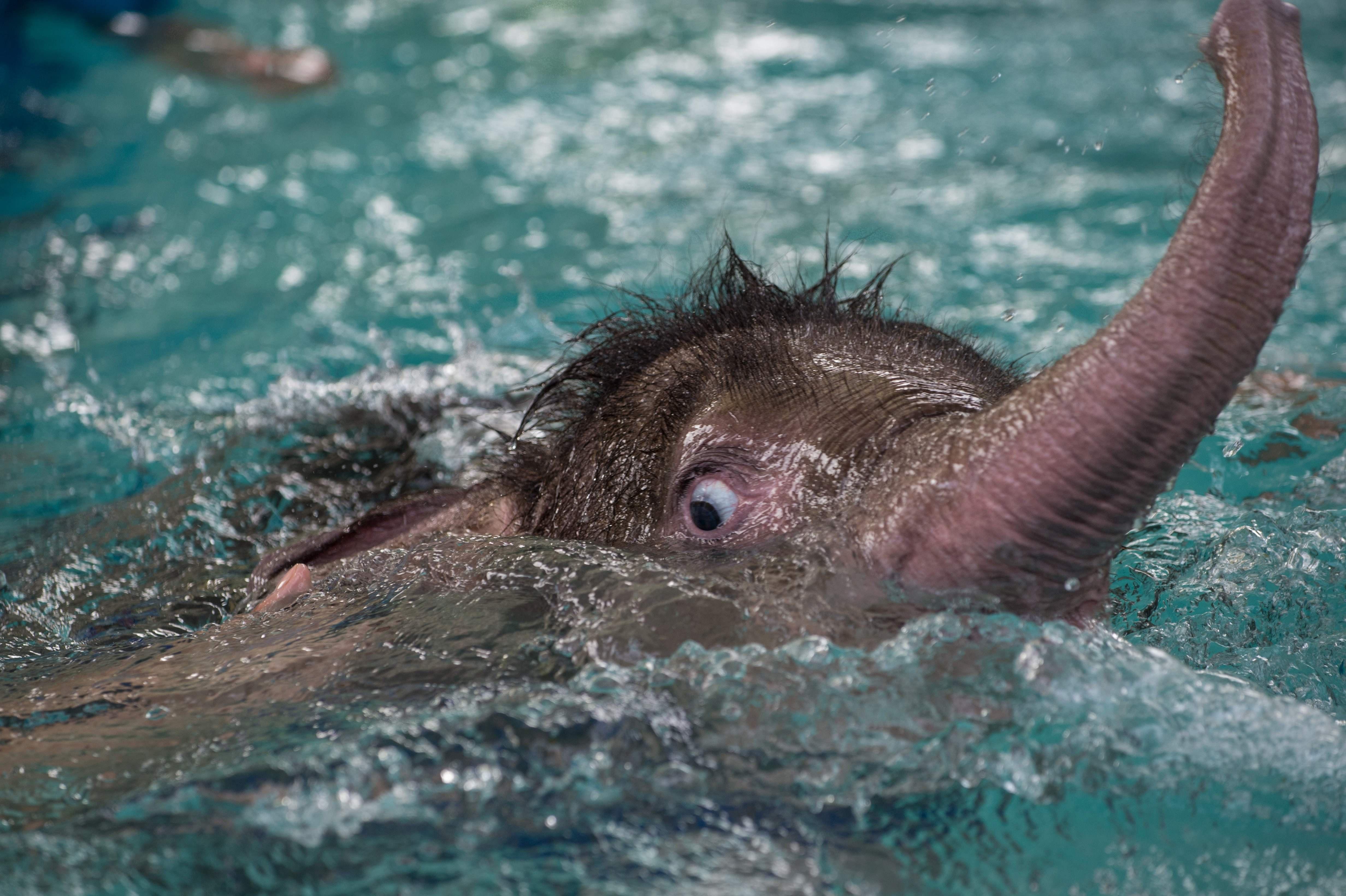 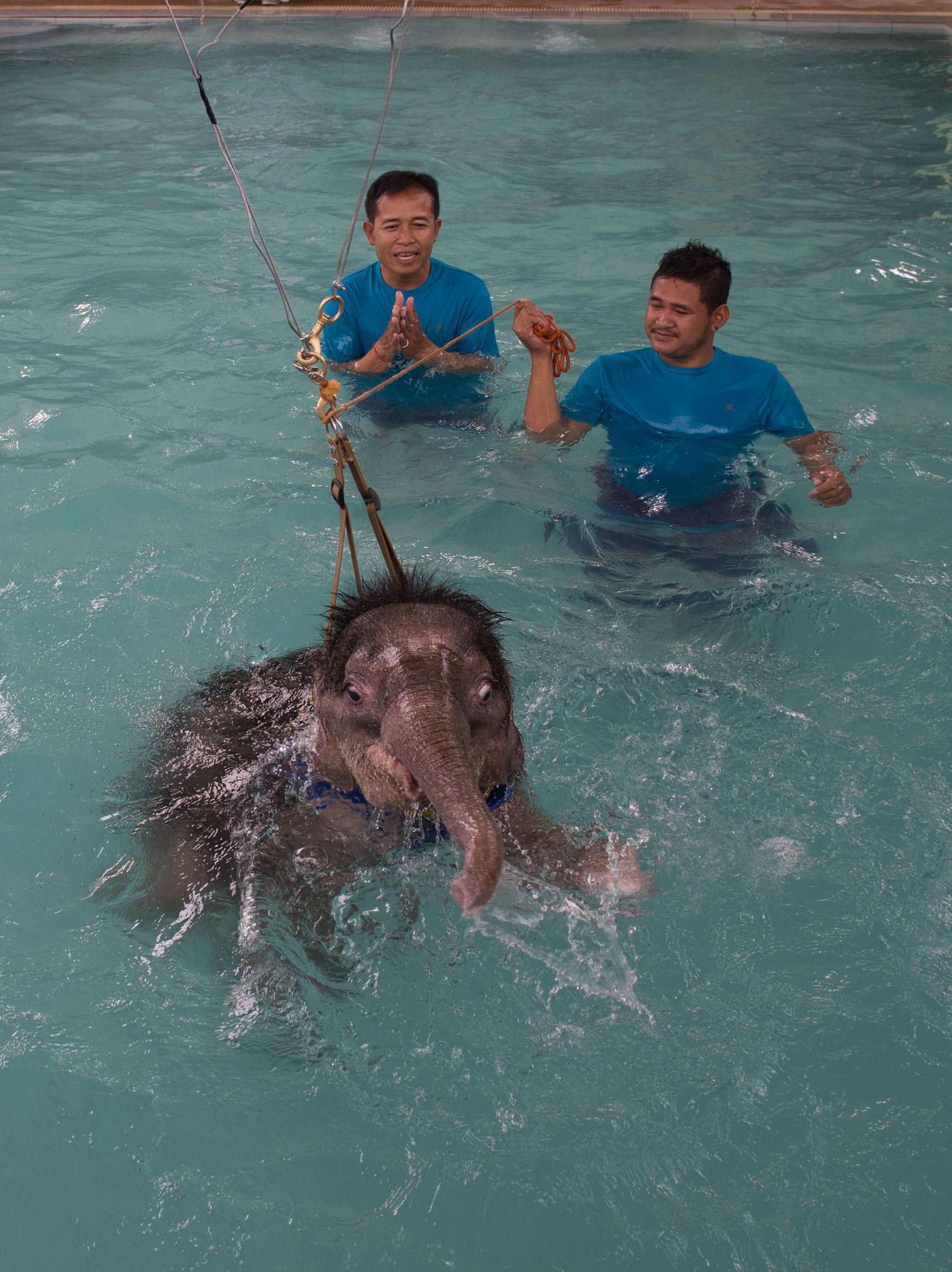 However, she appeared to relax by the end of the hour-long session credit: Getty Images

Vet Paget Siridumrong said: “She is still a bit nervous and scared of the water.

“If she can do this regularly she will have fun.”

Villagers had found Clear Sky hungry and hobbling, after being separated from her mother in the wild. 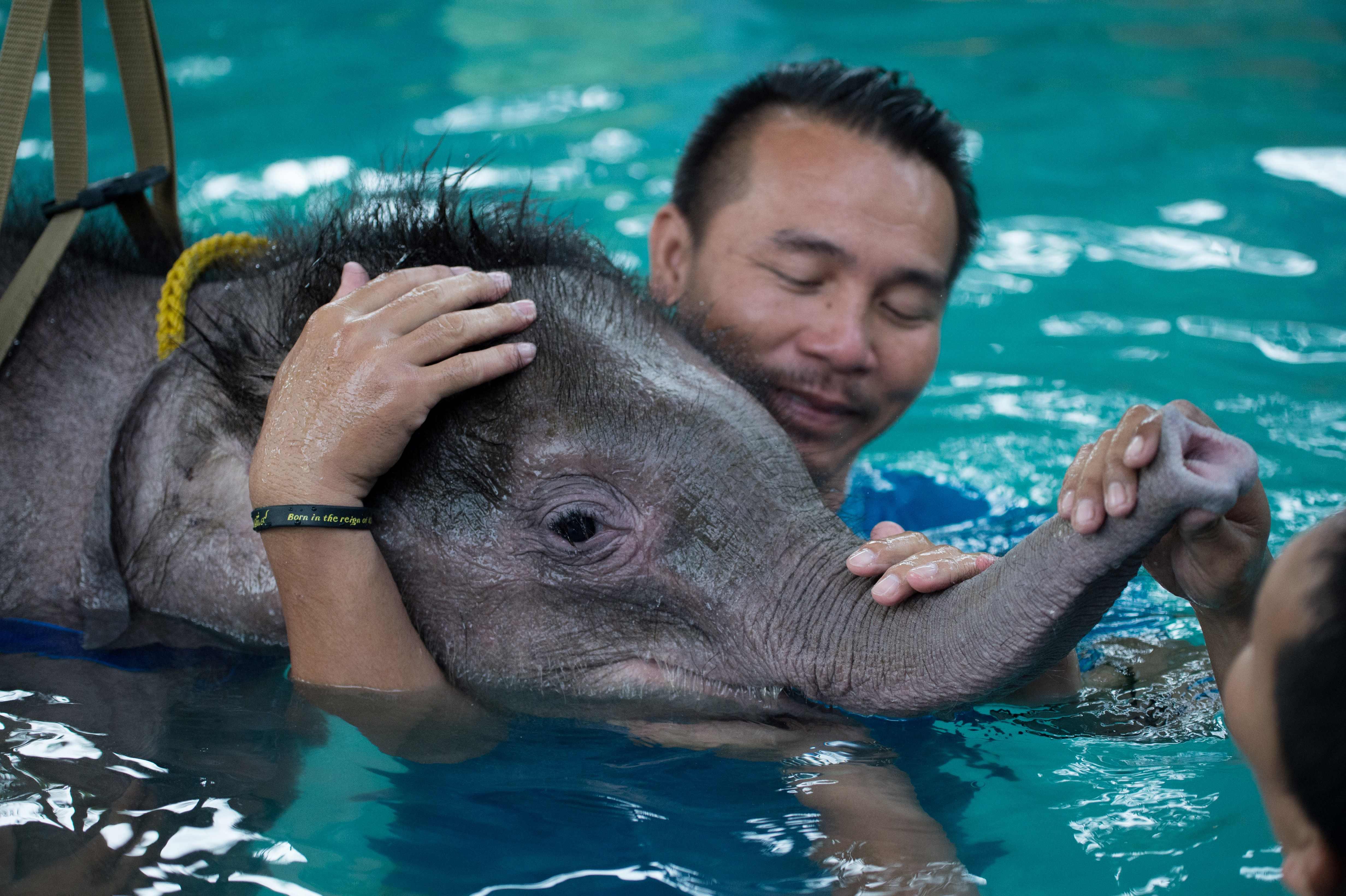 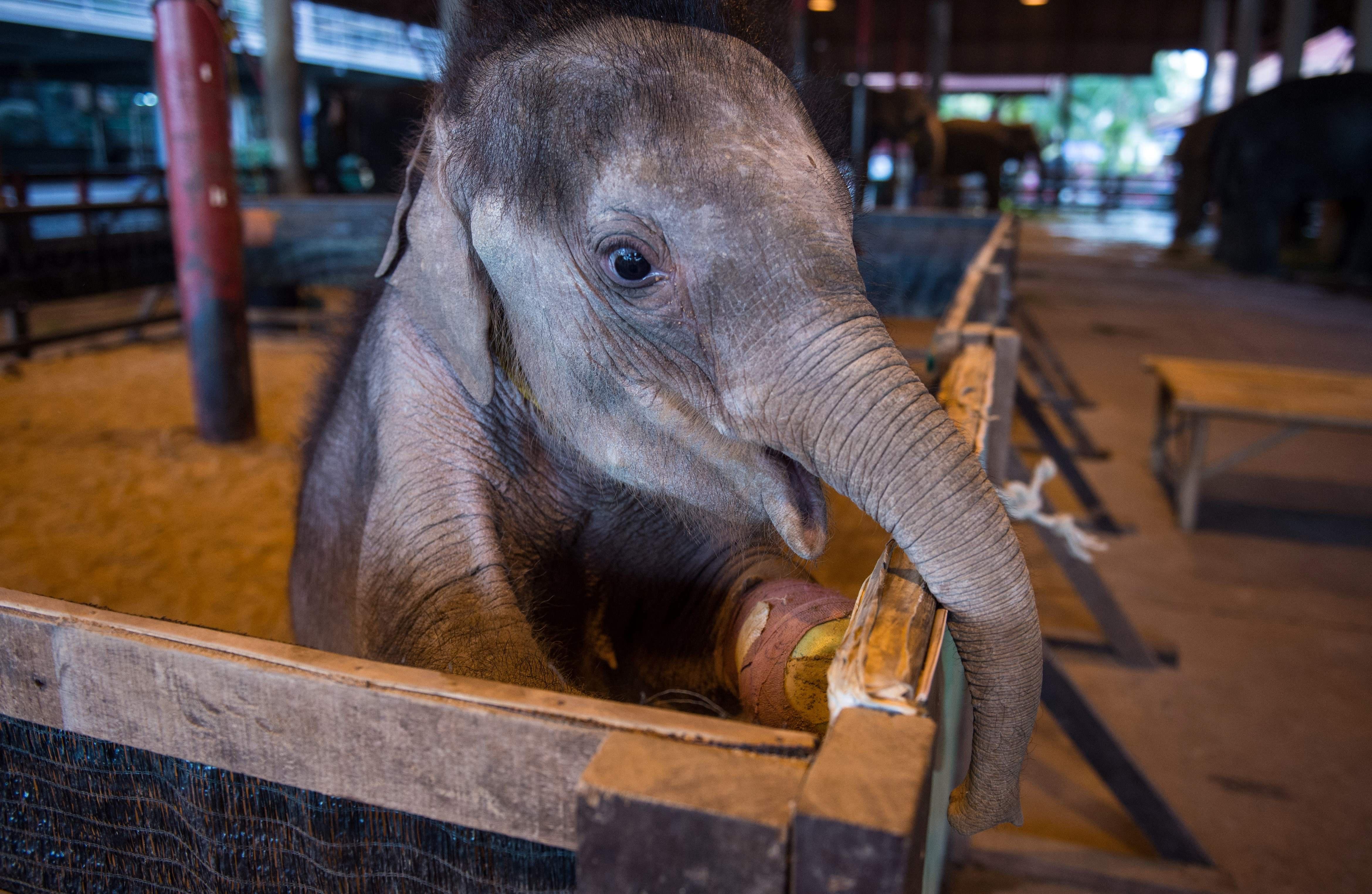 The orphaned elephant was in bad shape when she arrived at the hospital credit: Getty Images 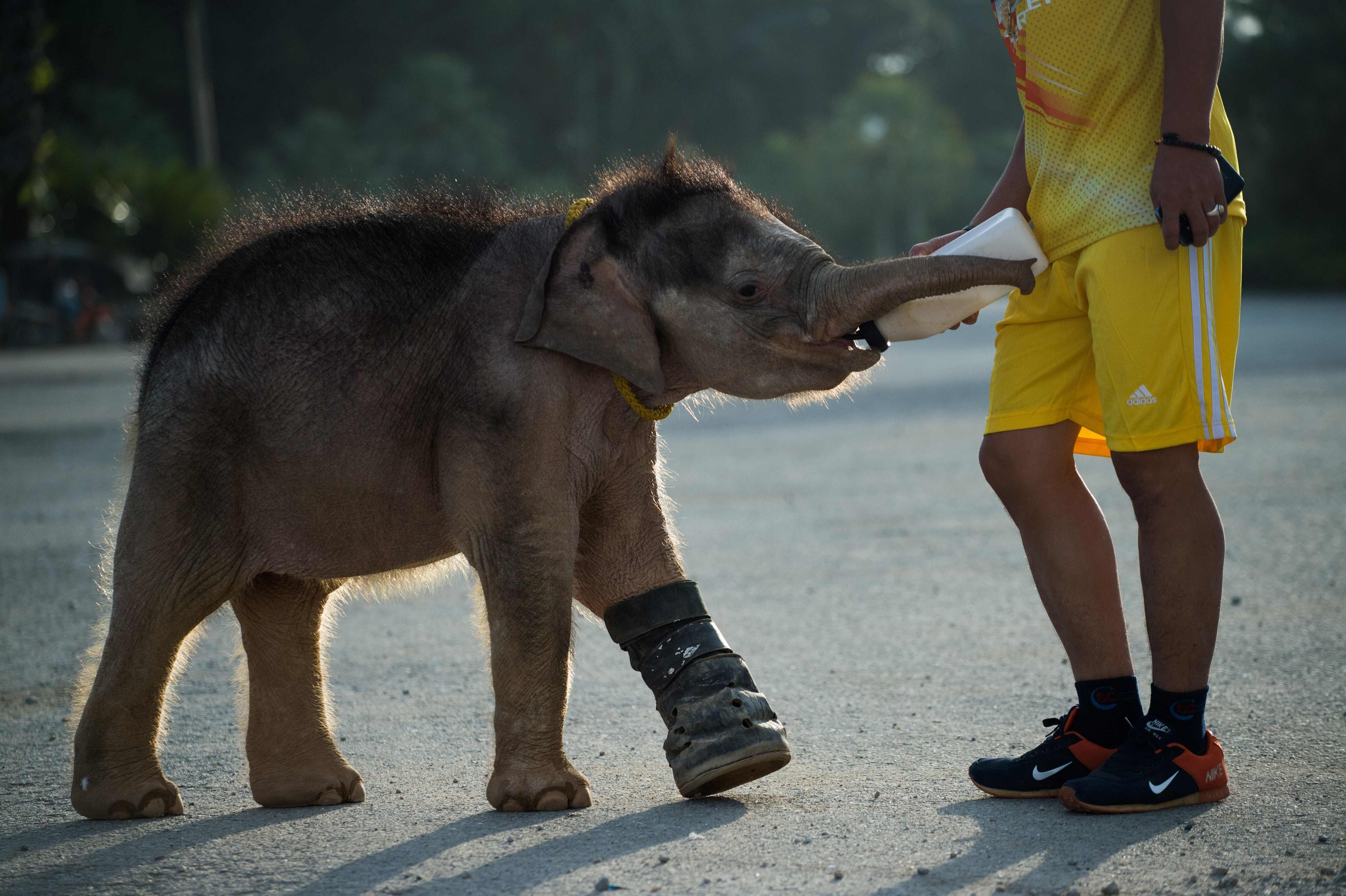 She was hobbling, in pain, and in dire need of milk credit: Getty Images 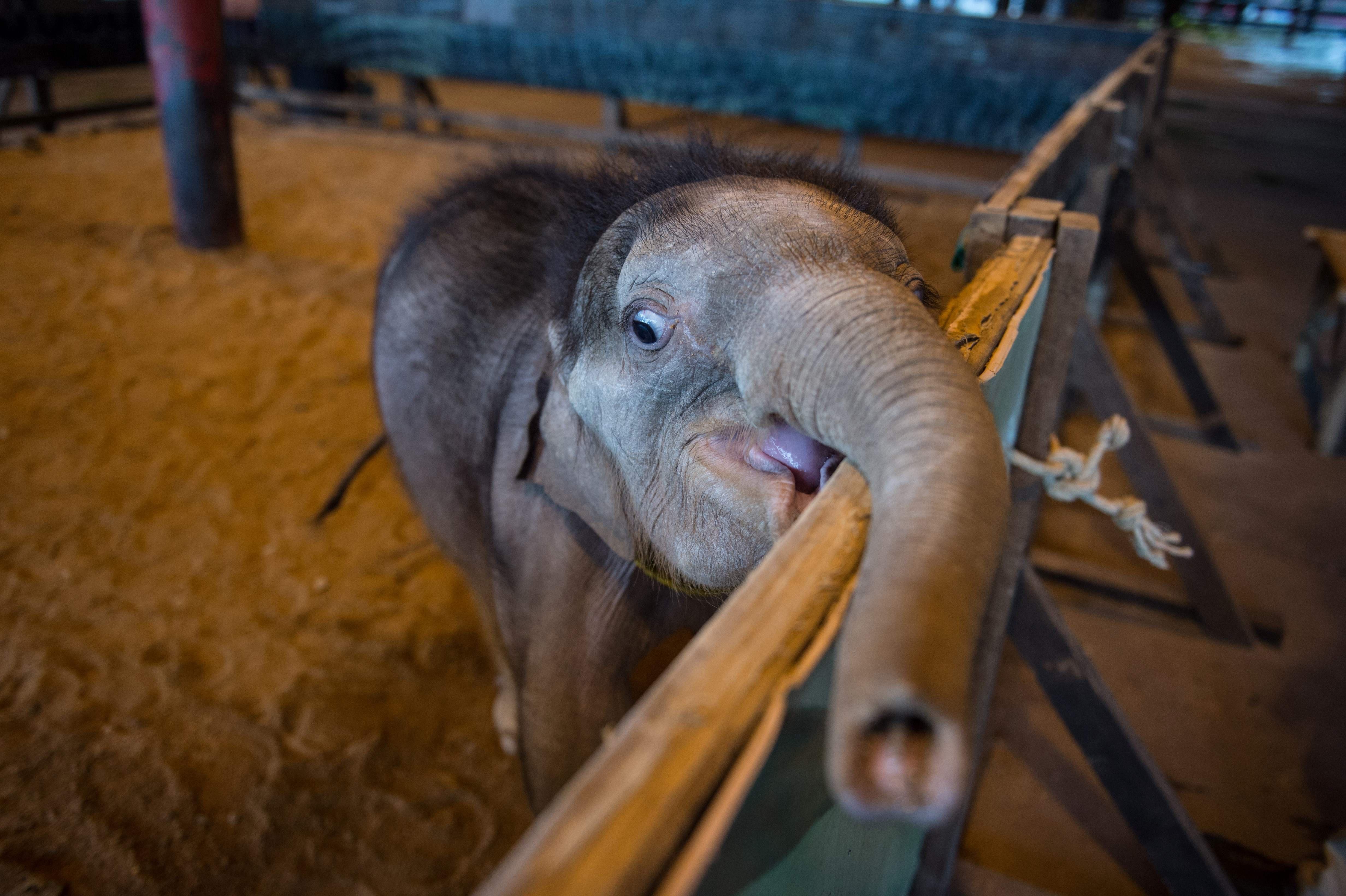 ‘We named her Clear Sky Up Ahead because that is what she will need while she is with us,’ said the director of the zoo where she now lives Credit: Getty Images

Kampon Tansacha, the director of the zoo that’s now her home, said: “We named her Clear Sky Up Ahead because that is what she will need while she is with us.”

Elephants are a revered national symbol in Thailand, but their population in the wild has plummeted to an estimated 2,500 in the last century, a result of rapid development, habitat destruction, and the ivory trade.