The Austrian town of Hall in Tirol is everything you expect from a former medieval economic hub. Narrow cobblestone streets, a castle, beautiful old churches next to market squares, and an impressive defense tower are all part of the biggest historic old town in Tyrol. The well-preserved town centre, the medieval Hasegg Castle (Burg Hasegg) and the mint where the world’s first thaler (of which dollar is the Anglicised form) was pressed, make Hall in Tirol a worthy contender to become a World Heritage Site.

The upper town square in Hall in Tirol with the St. Nicholas parish church at the back.

The rich history of Hall in Tirol

The oldest reference to Hall in Tirol (the locals never add the “in Tirol” part) dates to 1232. Its rich salt mines made it an important economic centre and are also where it gets its name from. At the time, the German word for a salt mine or source of salt was “hal”.

Hall’s riches increased after the regional mint was moved here in 1477. The Guldengroschen, the world’s first high-quality silver coin, was minted in 1486 from silver mined in nearby Schwaz. The Guldiner, as it became known, was copied by other states and soon it was only referred to as the thaler. This remained the main currency in Europe until the 19th century. Later currencies such as the dollar, the tolar, the tallero and the daalder were all modelled on the thaler.

You can still see the only surviving, fully functional coin stamping machine in the Hall Mint Museum. The museum is home to an impressive collection of coins, as well as the world’s largest silver medal, which weighs over 20 kilograms. 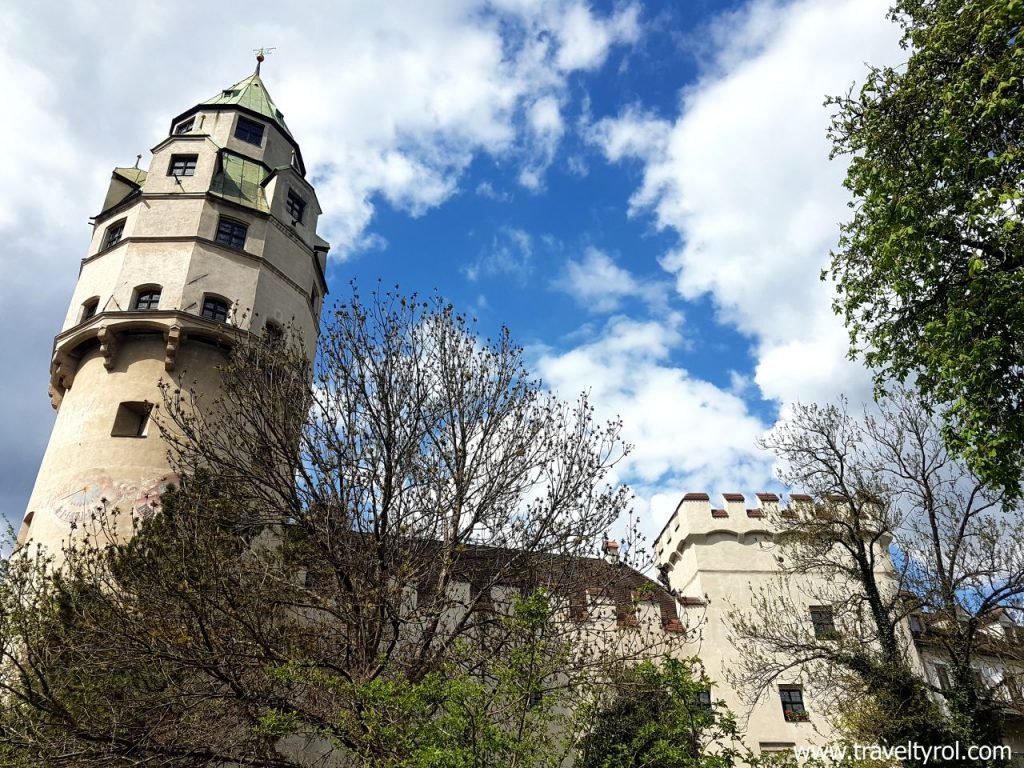 The medieval mint tower in Hall in Tirol.

The mint tower was strategically important to the town’s defense in the Middle Ages due to its position close to the Inn River. If you have the energy to climb the 186 steps to the top, you will be rewarded with magnificent views over Hall in Tirol and the Inn Valley. The tower and the museum are part of the Hasegg Castle complex, which dates to the 1500s.

The cobbled streets and squares of the old town of Hall in Tirol almost make you forget about the busy modern day traffic outside its borders. The buildings represent different time periods, ranging from the Roman and Gothic to the Baroque period. Even parts of the medieval defense wall are visible along the northern boundary. 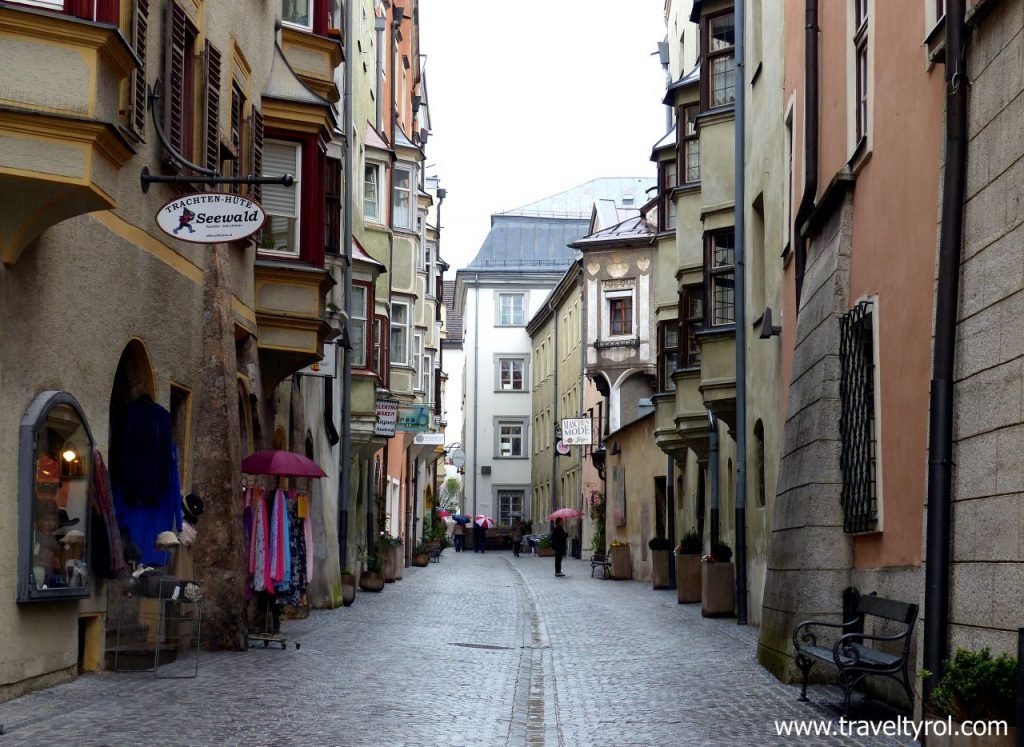 A cobbled street lined with small shops in Hall in Tirol.

Many activities in Hall in Tirol centre around the upper town square, which is dominated by the St Nikolas parish church. You can also marvel at the 600-year old town hall where couples still get married today.

The monastery square (Stiftsplatz) is east of the upper town square and flanked by the Sacred Heart Convent on one side. Sometimes you can see and hear nuns praying and singing inside. (Now you know where to go if you’ve never seen a real nun. We once had a guest who got very excited by the sight of one of these ladies in their penguin suits) 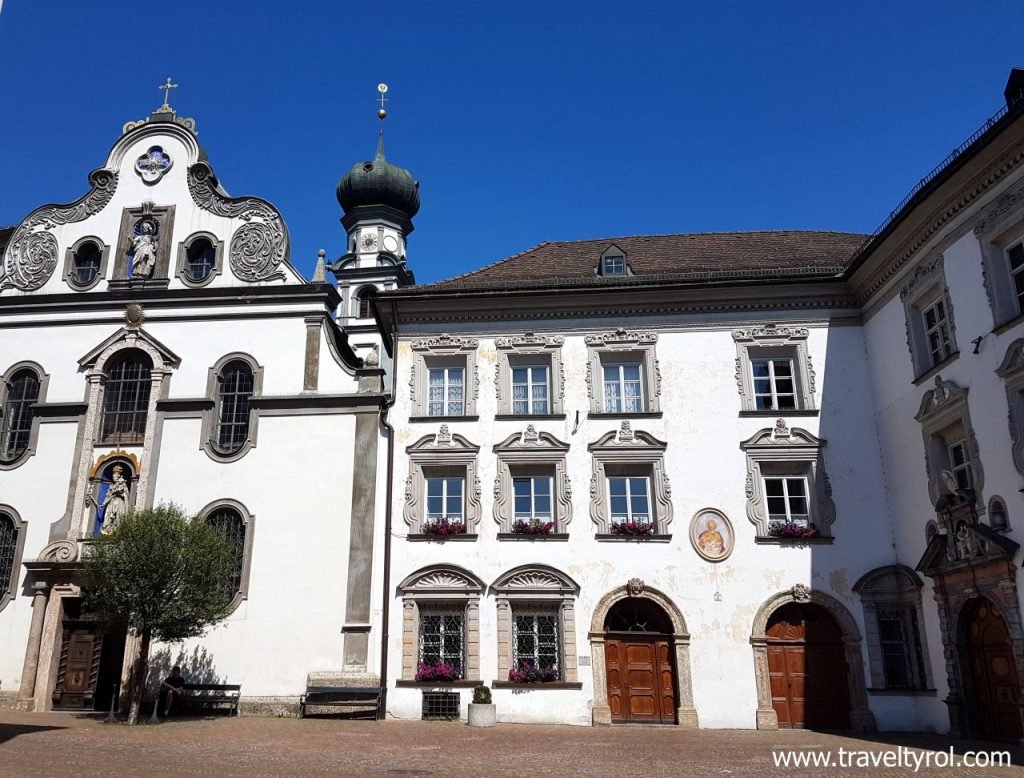 The Stiftsplatz where you’re likely to see a nun of the Sacred Heart Convent.

The lower town square is not as distinct as the upper one. It’s in a busy traffic area between the Hasegg Castle grounds and the town centre. Even so, it is still attractive. There is a big fountain with benches at one end where locals and tourists soak up the sun and eat ice-cream in spring and summer. This is also where you will often find M and me after his drum lessons.

Tip: For sleeping and eating in a traditional old town setting, The Goldener Engl Hotel and its restaurant, the Augustiner Bräu (yes, the same as the Munich one), are near the lower town square.

One of the reasons why we like Hall so much is because of the many child-friendly festivals and markets held on the squares and in the streets. The upper town square is turned into a farmer’s market every Saturday morning. Everything from farm fresh vegetables, honey, and eggs to homemade cheeses, bread, bacon, and marmalade are on sale. 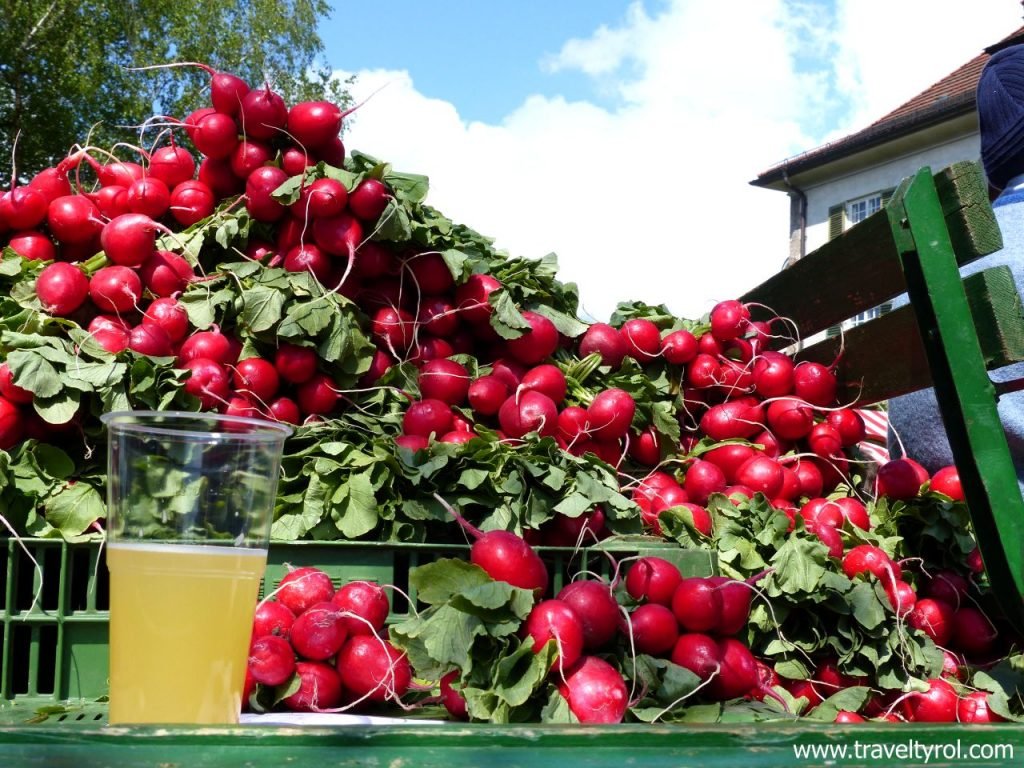 Wagon loads of radishes are sold at the annual radish festival in April.

On the last Saturday of April, the town is flooded with radishes for the annual radish festival. Local brass bands provide entertainment and children perform traditional dances. Festival-goers wash down plates of Tiroler Gröstl (a dish with potatoes and meat) with liters of beer. In between, wagon loads of radish bunches are sold at €1 each.

The festivities aren’t as robust at Easter, but the Easter market on the Stiftsplatz is always worth a visit. The Easter egg art exhibition held in the splendid Baroque town hall is a must-see. Hall’s Christmas market is much smaller than that of Innsbruck, but therein lies its charm. This is where we go for a “quiet” glühwein around a fire when all the bigger markets are overrun by tourists. 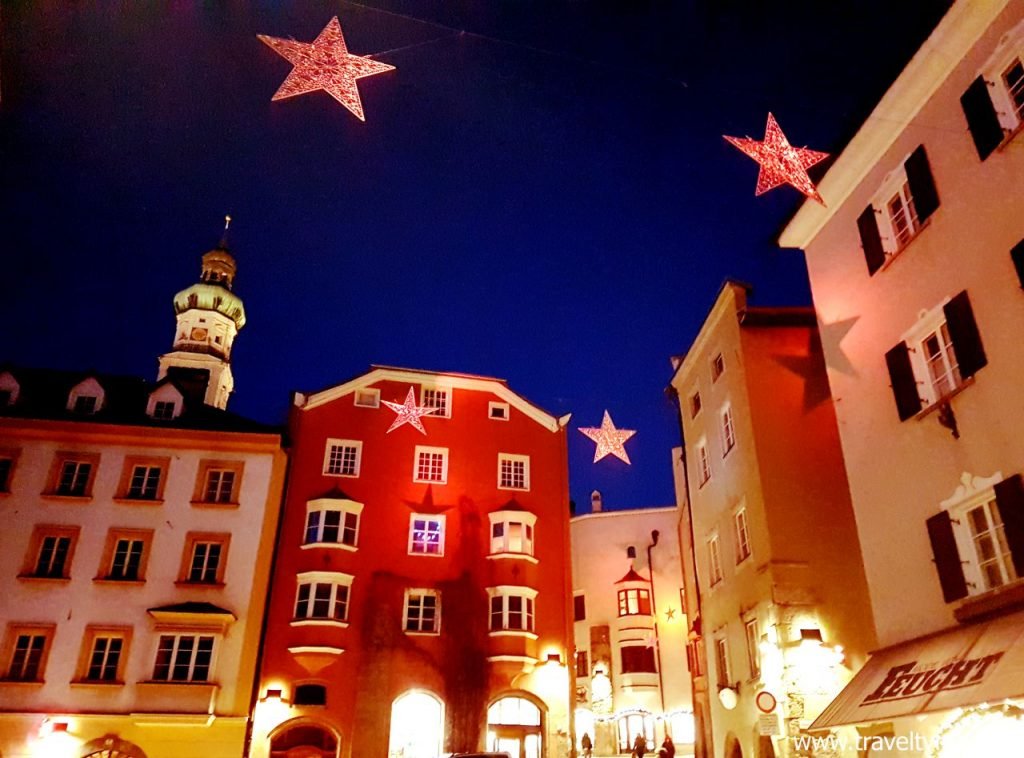 One of the entrances to Hall in Tirol at Christmas time.

Have a look at the summer activity calendar of the Hall-Wattens tourist association for details about guided tours and other activities in the area. The best part is that most of it are free if you stay in the region. So why not check out some places to stay in Hall in Tirol?

Where to eat and drink

Café Post – For the best cappuccino, teas, cakes and friendly service, Café Post is on the top of my list. It is near the lower town square on the Haller Straße. Find the Libro stationary store on the corner and continue past the bus stop, before you will see Café Post on the left.

Bäcker Ruetz – I also often wait for Mattheus at the Bäcker Ruetz on the upper town square. They have a wide selection of baked goods, and their hot beverages aren’t bad either. Just remember it is a self-service bakery. The big attraction is the free WiFi, which allows me to work while I wait. 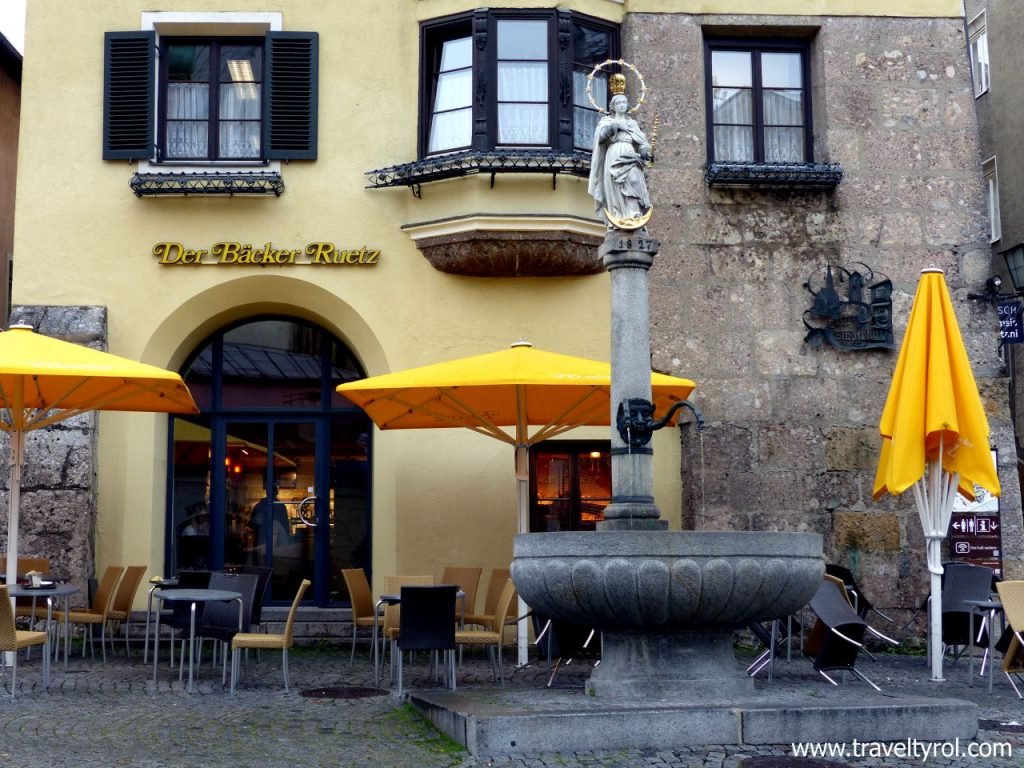 The Bäcker Ruetz has a prime spot on the upper town square. 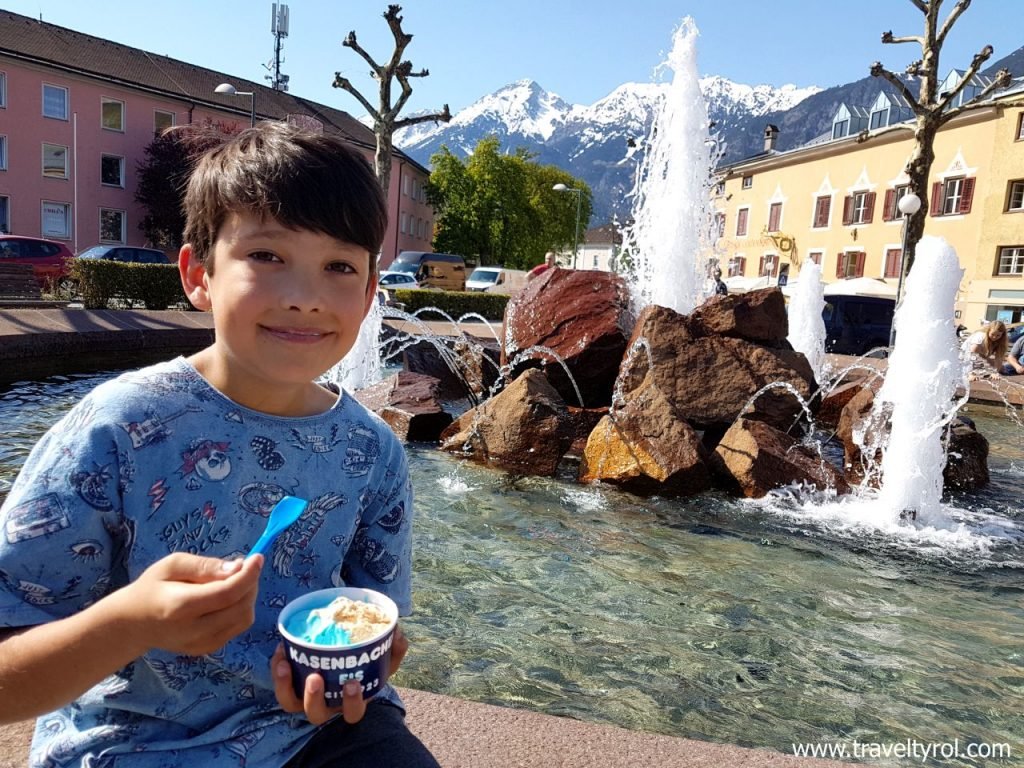 M enjoys his ice-cream next to the fountain.

Geisterburg – For family lunches or dinners, I can recommend the Geisterburg on the northern border of Hall. The ambiance of the centuries-old building is great and the menu is varied – from a wide choice of pizza to burgers to traditional dishes. It is also one of the few restaurants in Tyrol with a playroom for kids.

Getting to Hall in Tirol

I suggest grabbing a map and some brochures at the tourist information centre (marked) and starting your tour of Hall in Tirol here. I also marked the train station to help you find your way from there.

By Car – Hall is easy to reach from the A12 highway, taking the Hall Mitte exit. Some street parking is available (behind the blue lines) for periods of no longer than 90 minutes. Every 30 minutes cost €0,50. If you can’t find street parking or plan to spend more time in Hall, there is a parking garage near the lower town square (first hour free) and another one further along next to the northern border of the old town.

By Bus – Bus lines 504 and 4123 travel between the Innsbruck main station and the lower town square (Unterer Stadtplatz) in Hall. The journey takes about 22 minutes and a standard ticket costs €3,60 per adult.

By Train – Various regional trains leaving Innsbruck in the direction of Jenbach, Wörgl, and Kufstein stop in Hall. From the train station, it is only a 10-minute walk to the old town centre. Standard tickets also start at €3,60.

By Bicycle – Due to its location close to the Inn River, Hall is also easily accessible via the Inn Valley cycle path. You can leave your bikes at the bike stand behind the tourist information centre.

13 unique things to do in Austria. Bucket List Must-Haves!

Why You Should Visit Salzburg, Austria – The Musical Metropolis Beyond Mozart & The Sound of Music