Moving to Portugal? Get to grips with the local weather as we break down the climate and seasons in Portugal.

If you’re relocating to Europe’s oldest nation-state, you might be pleasantly surprised to know Portugal is home to some pretty varied weather. Indeed, while many picture the popular beaches of the beautiful Algarve when considering Portugal’s climate, they often don’t realize that just a few hundred kilometers north there are actually places you can go skiing. Puzzled? Fear not. We explain it all in this guide, which includes:

Like Spain, Italy, and Greece to the east, Portugal has a Mediterranean Climate. This is despite not actually having a Mediterranean coastline. Even though over 3,000 kilometers separate Lisbon (Lisboa) from the Greek capital, Athens, you can expect hot summers and wet winters in both capitals. Unlike its eastern counterparts, however, Portugal’s climate is also heavily influenced by the Atlantic Ocean. The ocean moderates the average temperature in both summer and winter. This is especially true in the autonomous island regions of the Azores (Açores) and Madeira, located out in the Atlantic.

Despite being a relatively small country, Portugal has a few surprising regional differences in it’s climate. Make sure you’re not caught out by reading up on what to expect – and where.

If you’re moving to the northern parts of Portugal, be sure to pack your umbrella and a rain jacket or two. Porto is the wettest major city with a Mediterranean climate. The rest of the region also sees plenty of the wet stuff, particularly during the winter. However, the port city enjoys dry and warm summers and still looks beautiful under stormy skies. 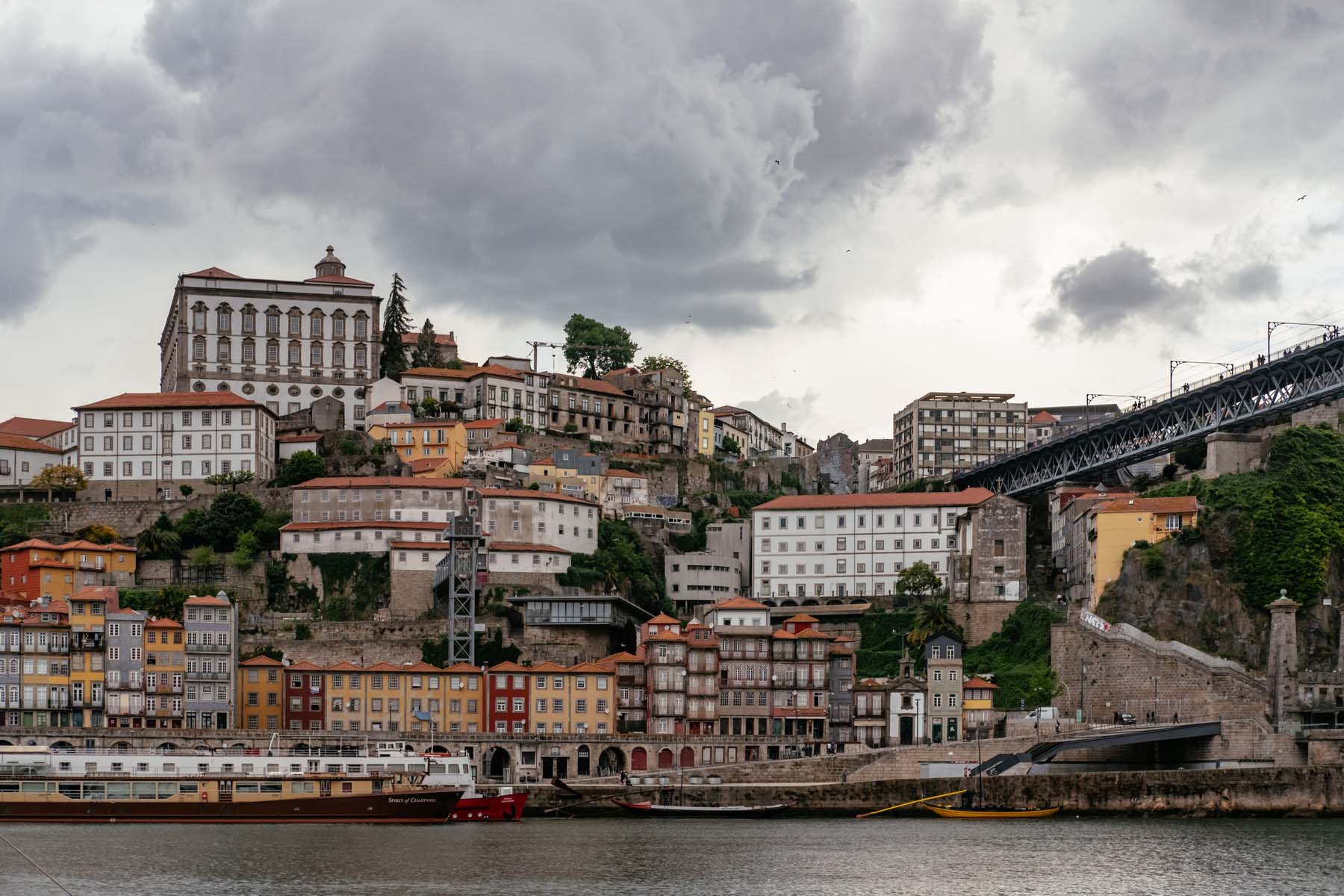 Porto as a storm moves in

In other northern cities like Braga and Viana do Castelo you can expect long, dry summers and chilly, wet winters. However, on the bright side, those wet winter days will give you the perfect excuse to stay in and cozy up with a warming bowl of caldo verde, which hails from the local Minho province.

The central region of Portugal is host to a variety of noteworthy landmarks, from Aveiro – the so-called ‘The Venice of Portugal’ – to the university town of Coimbra. Perhaps most famously, though, it’s home to the highest mountain in continental Portugal – Estrela Mountain (Serra da Estrela). The climate in this part of Portugal is slightly drier and hotter than in the northern areas. However, this does change when you venture further inland to the more mountainous parts. Remember the skiing we mentioned earlier? The Serra da Estrela region is where you’ll find the country’s cozy ski resorts. If you’re waiting for a snowy day, don’t book your trip for January or February – your best bet is to wait until March.

There are plenty of reasons why tourists love Lisbon; it’s cheap, fun and, most of all, the climate is great. In Portugal’s capital and all along the Tagus Valley, you can expect hot, dry summers and relatively mild winters. In fact, Lisbon has the warmest winter nights of any major European city – something to note if you like your midnight wanders. 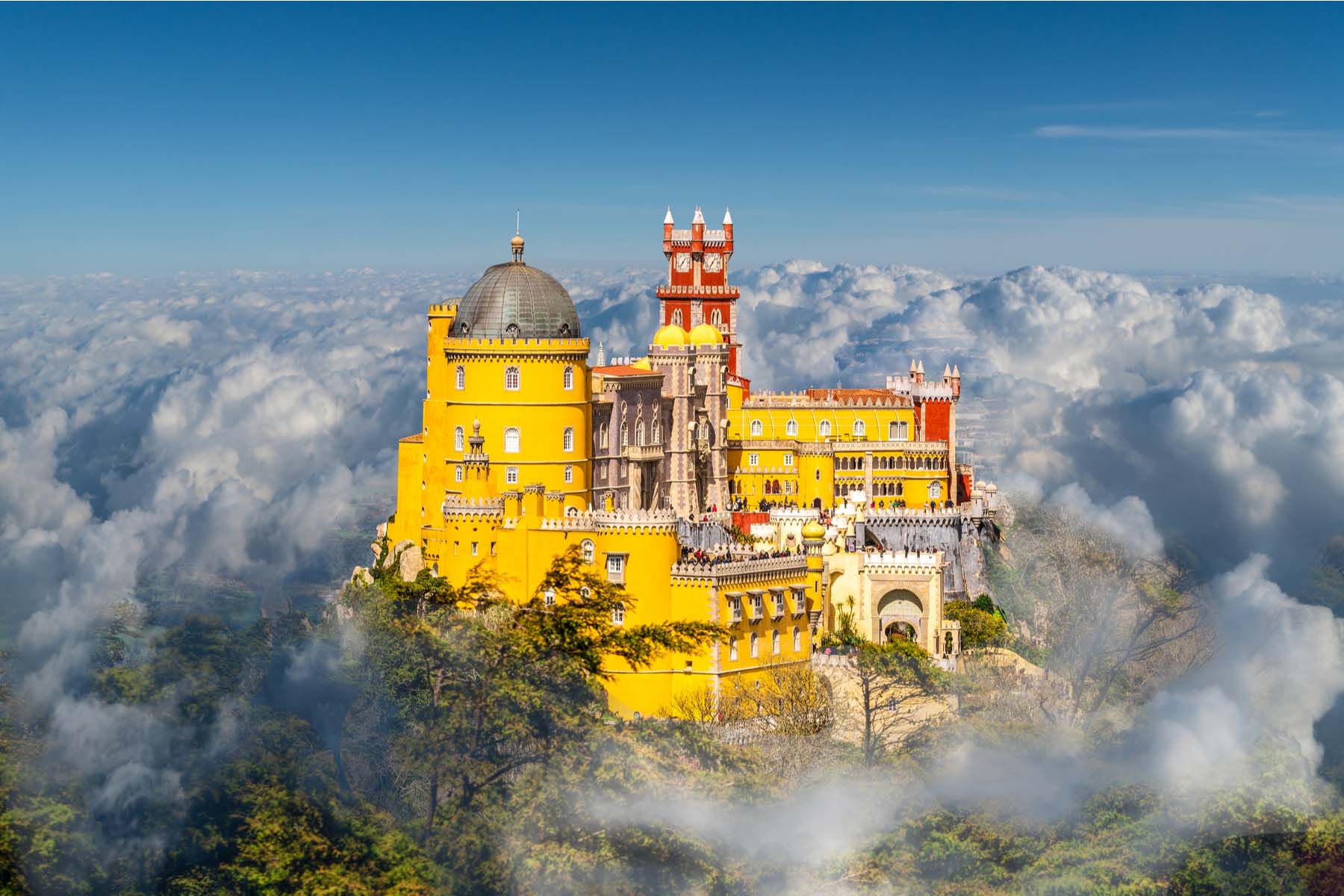 If you’re looking for a quick getaway from the city heat during those sunnier days, seek refuge in the Sintra forest, a popular spot for a little relaxation. Here, you’ll find temperatures a few degrees cooler in the summer, as well as a treasure trove of cultural offerings for the whole family to explore.

South (Alentejo and the Algarve)

The further south you go in Portugal, the hotter it gets. You’ll want to switch to short sleeves as you explore Alentejo and the Algarve, especially in the summer. Here, you can find savannah-like landscapes inland, while on the coast there are plenty of rocky beaches just waiting to be explored.

The climate of hot, dry summers and warm, relatively dry winters is only part of the reason many expats call this corner of Portugal home. The culture is rich around these parts, with a laid-back vibe that resonates whether you’re playing golf, catching waves at the surfer’s paradise Praia do Amado, or enjoying a succulent sardinha assada in the sunset.

More than 1,000 kilometers off the Portuguese coast lies the nine-island archipelago of the Azores. Here, you can find some of the most breathtaking Portuguese landscapes – and even a few whales. 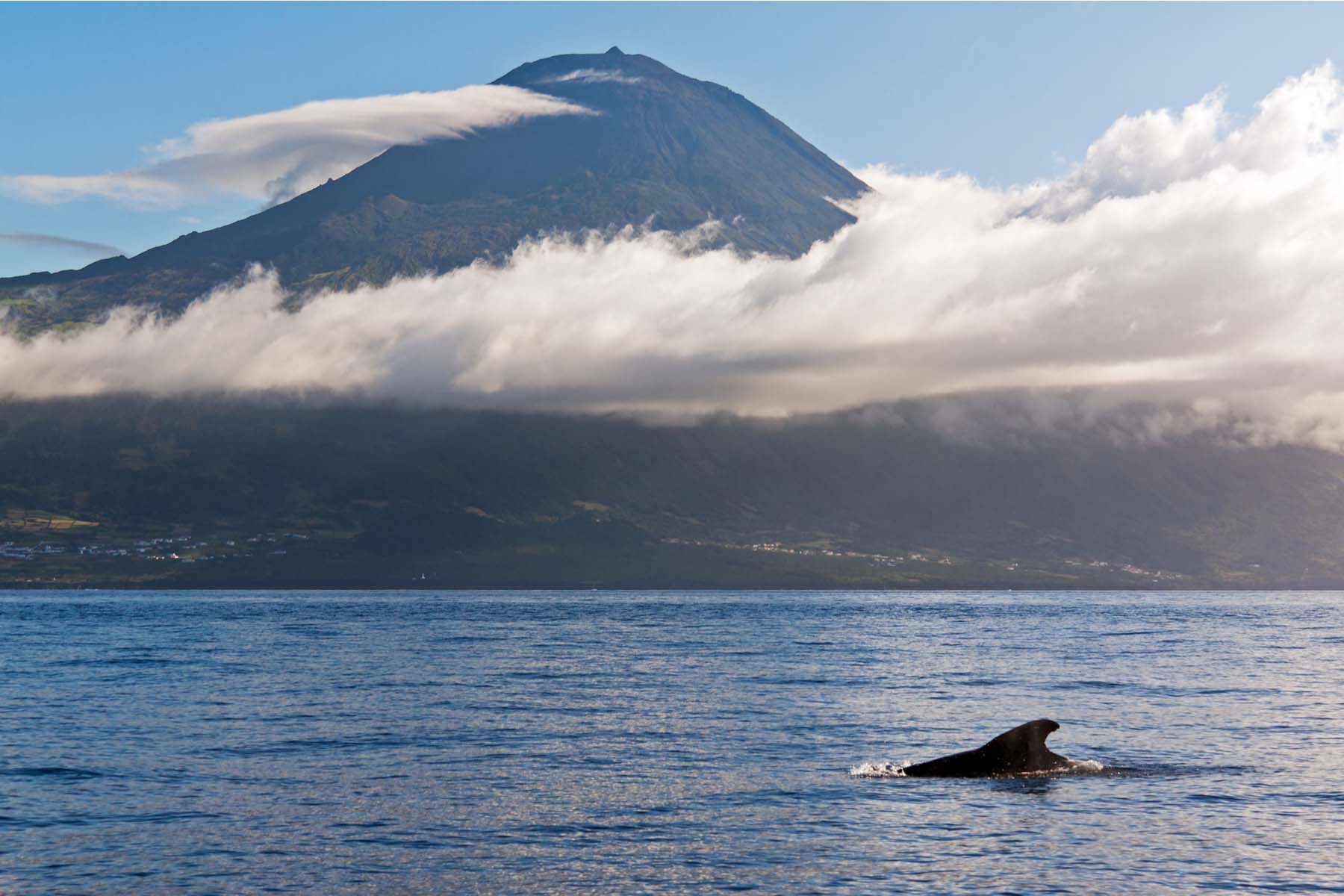 Whale watching in the Azores

Known for their peaceful meadows and lagoons, the islands of São Miguel, Terceira, Faial, and others also enjoy mild climates throughout the year, influenced by the Gulf Stream. However, their location also means they are susceptible to tropical storms and hurricanes.

You may know Madeira as football legend Cristiano Ronaldo’s birthplace, but there is much more to this four-island archipelago. Just ask the 1.4 million tourists visiting each year – almost five times its population. 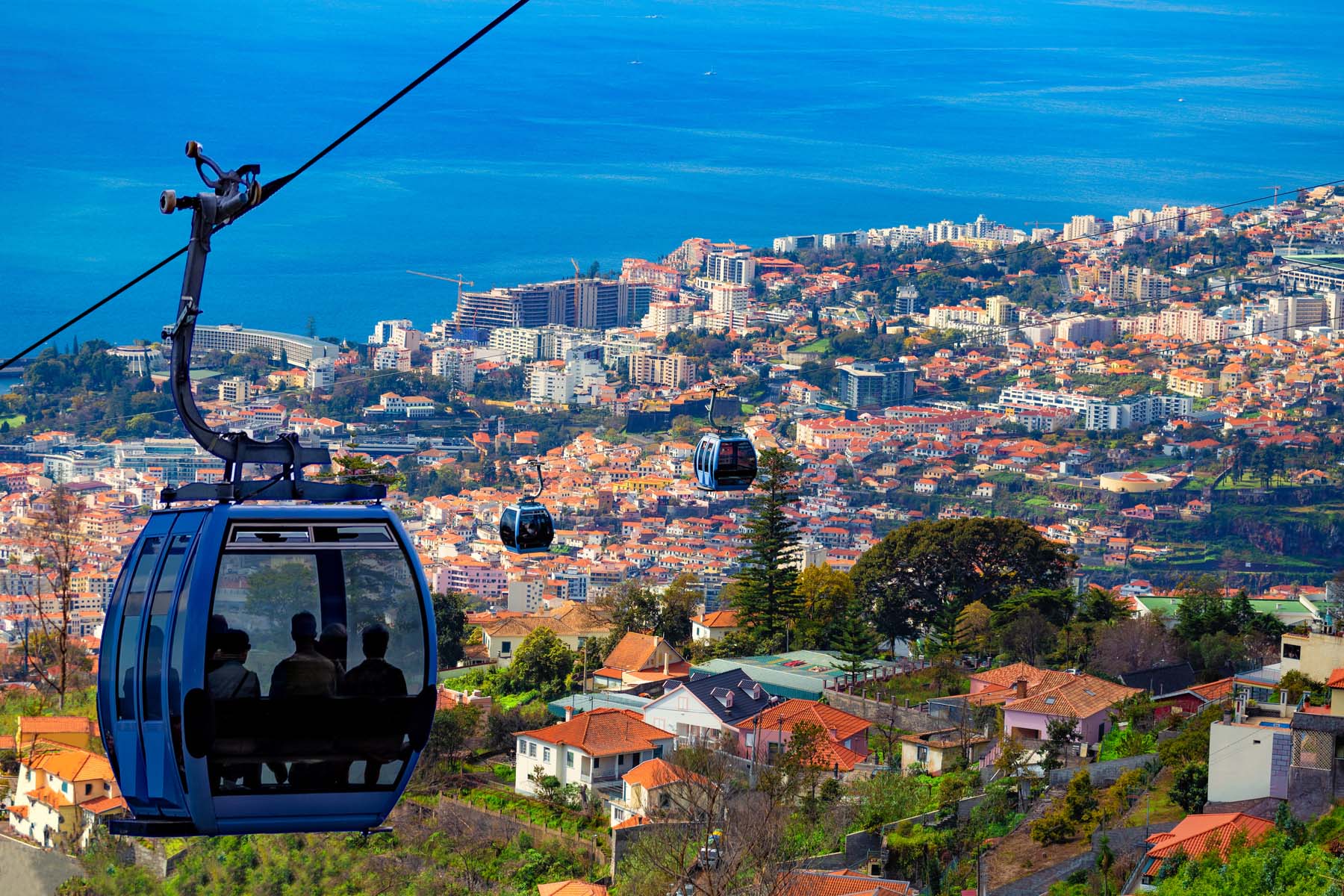 Putting the fun in Funchal

Situated a few hundred kilometers off the Morrocan coast, the islands of Madeira, Porto Santo, and Desertas have a very moderate subtropical climate. This makes the island a great place to live and visit any time, enjoying warm weather throughout the year.

Get an idea for what you can expect in your new Portuguese home by understanding the local climate averages.

Although Portugal’s climate varies from region to region, you can generally count on warm summers and moderate winters, as well as mild autumns and springs. The average temperature dips to 17°C in January through March and rises up to 27°C in the summer. Of course, there have been several exceptions through the years. One such exception is the freezing winter of 1954, which saw Serra da Estrela record temperatures as cold as -16°C. At the other end of the thermometer, a whopping 47°C was registered in the Southern parish of Amareleja, in 2003. It remains one of the hottest temperatures recorded in Europe.

Brazilian singer Elis Regina might have sung about the waters of march, but the Portuguese saying goes ‘em Abril, águas mil’ (which translates to ‘in April, water in the thousands’). But due to its Atlantic coastline, you can expect rainy days in Portugal all year round. Porto and the north of Portugal tend to soak up most of this rainfall. However, the rest of the country isn’t safe from frequent showers. In Lisbon, the average yearly precipitation is just over 700mm, whereas in the drier south, Faro, the capital of the Algarve, receives just 500mm. A good rule of thumb in some of the wetter northern regions is to check the weather forecast before you leave home to avoid getting drenched.

If you love the sunshine, Portugal is the place for you. Lisbon is actually one of the sunniest places in Southern Europe, with almost 3,000 hours of sun per year. Further south, the Algarve also enjoys plenty of time in the sunshine, meaning a lot of time to hit all those great beaches.

Paired up with the refreshing sea breeze, Portugal’s bright climate makes it perfect for expats looking for some all-important vitamin D. This is especially true if you plan on setting up home near one of those Southern beaches.

If you’re dreaming of a white Christmas, you can keep on dreaming – for the most part. Although Portugal is not known for its freezing climate, snow has fallen in the main cities on very rare occasions, such as the 2006 European cold snap, which saw Lisbon turn white, even if only for half an hour. There is, however, a notable exception; the aforementioned Serra da Estrela, home to the country’s only ski lifts.

Don’t expect to be swamped in the sunshine as soon as March comes, as you can still get gray skies and rainfall all the way through April in many areas. However, the weather will get warmer as the flowers bloom, and you can expect a mild spring lasting from March to June, with temperatures reaching up to 20°C or more. As rain can still come down whenever though, make sure you keep your umbrella close. But feel free to start shortening your shirt sleeves as the sun begins peaking through the clouds.

You can also make the most out of your Easter break and book a trip to the Alentejo or the Algarve to start enjoying the first sun rays of the year, like many Portuguese families do.

In Portugal, summer is considered to run from June to September. However, in reality, you can start expecting beach weather as early as May. At the height of the season, in some regions, the heat may even get too much for any activity that doesn’t involve swimming or sitting under a parasol. In July, average temperatures can rise to almost 30°C in the southern half of the country.

Albufeira in the Algarve

If you’ve just moved to Portugal, slather on your sunscreen and grab your swimsuit for a summer best spent by the beach. And if you want to switch sand for the cobblestones of the capital, keep an eye out for Lisbon’s Saint Anthony’s Day – a perfect summer night party in town.

Looking to trade the beach for the forest? Consider checking out the Azores or Madeira. The Portuguese islands are perfect for nature lovers looking for fresher days, as the average temperatures tend not to go above the 25°C mark, even in peak summer.

The beginning of Autumn in Portugal is usually marked by the start of the school year in September. As days get shorter and nights grow longer, you can expect temperatures to drop – but not too much. Indeed, daily temperatures can still bother 20°C into autumn, there is plenty of time to enjoy the outdoors. However, bring along a light jacket for cooler evenings. 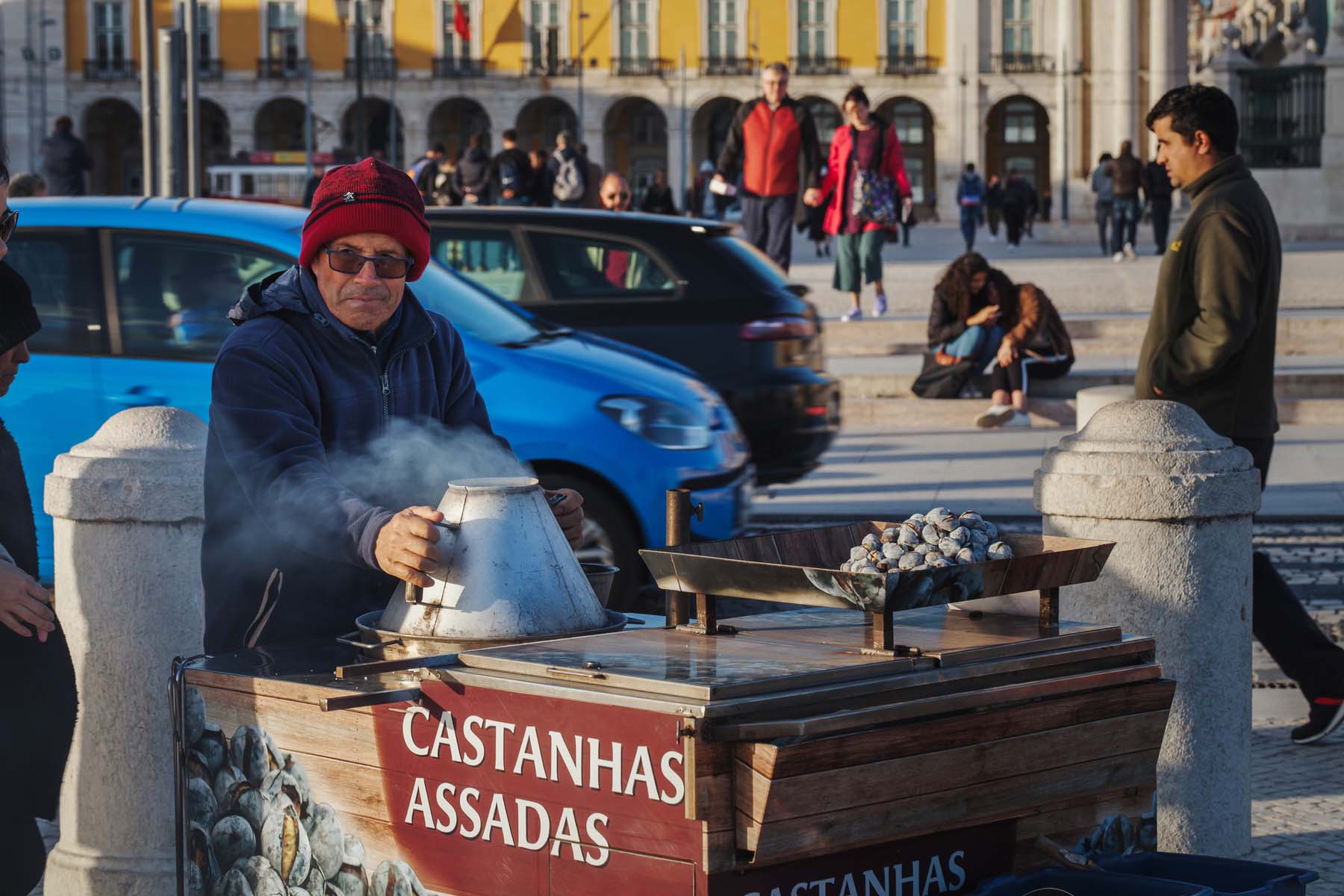 Just like Germany and the Netherlands, a notable holiday in this period is St. Martin’s Day in November. The Christian holiday commemorates the kindness of the Roman soldier who cut his cloak in half to share with a beggar during a snowstorm. While it’s unlikely to snow in November, you can celebrate with traditional roasted chestnuts, popular this time of year.

If you freeze easily, Portugal is the place for you. It’s unlikely you’ll get caught in a snowstorm in the Portuguese winter, given temperatures don’t usually go too close to freezing. Expect showers, though, as Portugal experiences way more rainfall than neighboring Spain. So make sure to bring your umbrella and rain jacket everywhere between December and March, or you might get a molha (soaked).

The most important public holiday this season is Christmas. The gray, rainy weather is the perfect backdrop to enjoying some soul-warming dishes typical of the season in Portugal – and then some more. Although Portuguese people love to dine out in the summer, nothing tastes as good as a bacalhau straight out of your home oven when it’s cold outside.

If you’re looking for something a bit more active, book a trip to Serra da Estrela’s ski resort at the end of winter and hit the snowy pistes. And yes, maybe eat some queijo da serra as well on your way down the mountain slope, best helped down with a bottle of red wine.

The busiest holiday season in Portugal is undoubtedly summer – particularly August, a time in which many local and international tourists travel to the Algarve and the Alentejo for the sun, sand, and sea.

Another big attraction during this season is music festivals. Big players include NOS Alive Festival in July, near the Tagus River, and Porto’s edition of the ever-popular Primavera Sound. The latter takes place every June in the city’s Parque da Cidade.

Although most Portuguese people travel south in the summer, spring also offers a chance to take a break from school or work with the two-week Easter holiday in March and April. Other holiday seasons include Christmas, in which many Portuguese families prefer northern destinations to the Algarve and the Alentejo (for the rare chance to see snow). You’ll also enjoy a few days off during Carnival or Mardi Gras in late February for a quick getaway, although the weather can be changeable.

How To Spend 48 Hours in Lisbon