A baby elephant who got stuck in a watering hole was lifted out by park rangers in a heart-rending rescue attempt.

Visitors to the Addo Elephant National Park in South Africa were devastated to discover a herd of elephants desperately trying to pull their baby out of the water.

After attempts to break the steep bank failed, two brave park rangers jumped into the water to heave the drowning elephant calf out onto the bank. 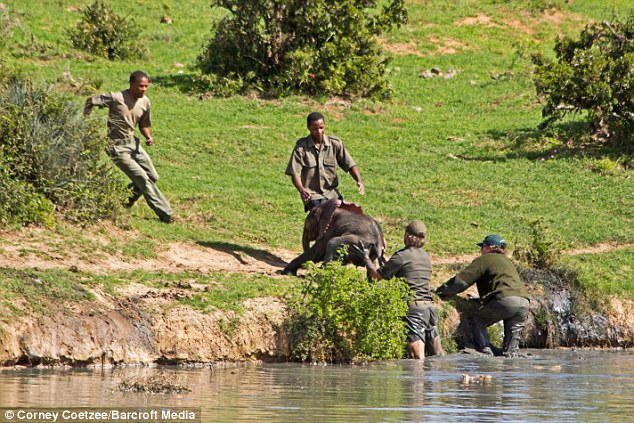 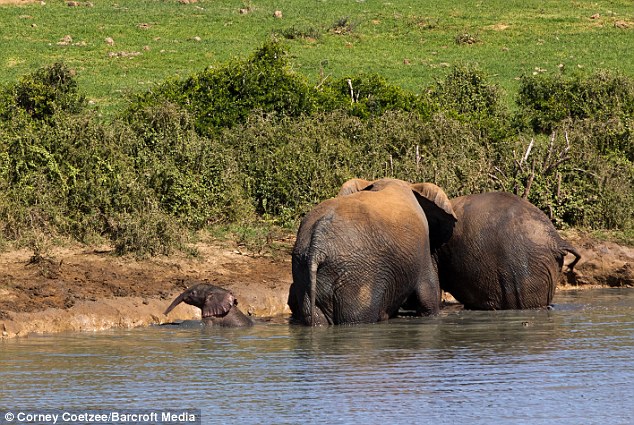 Trapped: The animal was unable to climb out of the water as the bank was too steep for its short legs 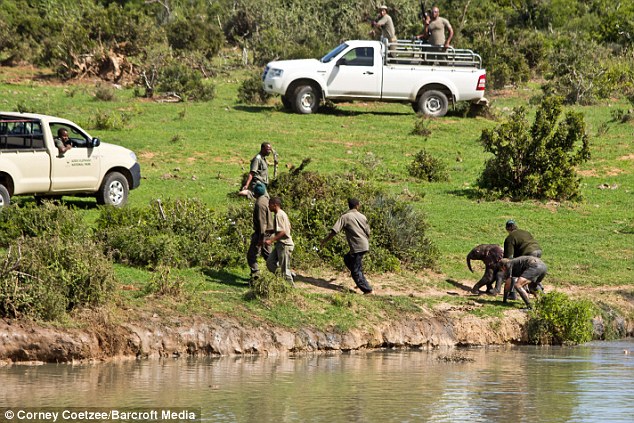 Scuba instructor Corney Coetzee, 39, captured these dramatic photographs of the desperate rescue attempt at the park near Port Elizabeth.

Carney said: ‘The adult elephants were using their trunks to spray vast amounts of water on the bank of the watering hole and then putting their weight on the edges in an attempt to break it down.’

The baby elephant had been floundering in the water for more than 20 minutes when one of the park’s rangers arrived and called for reinforcements.

Corney said: ‘The rangers attempted to use a digger to break the steep edge allowing the baby elephant an escape onto the shore. 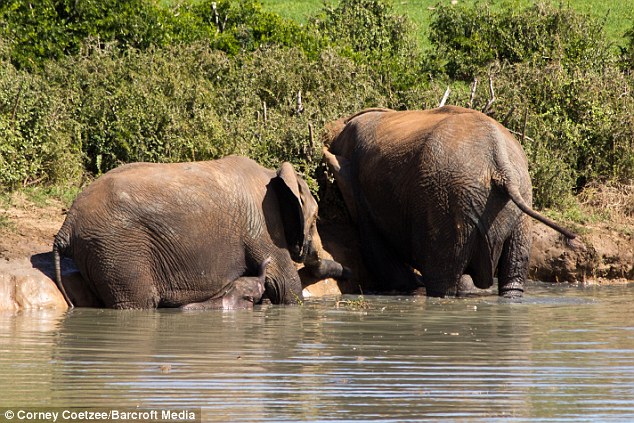 Animal rescue: The elephants tried to mount their own rescue by trampling the sides of the bank 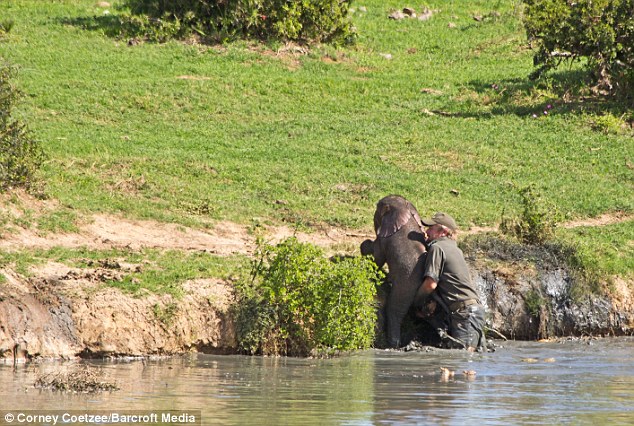 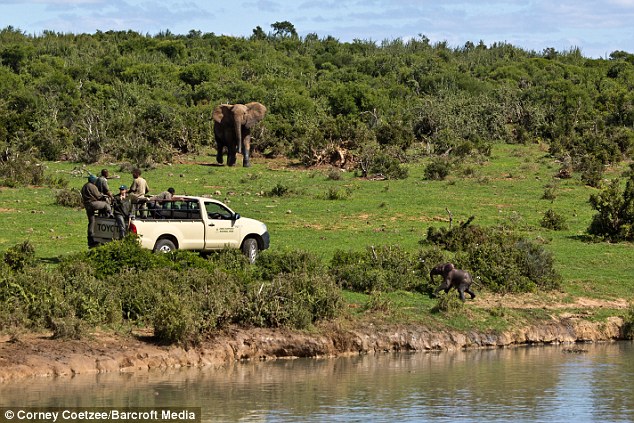 About to charge: The men keep a wary eye on the protective mother elephant who watches nearby 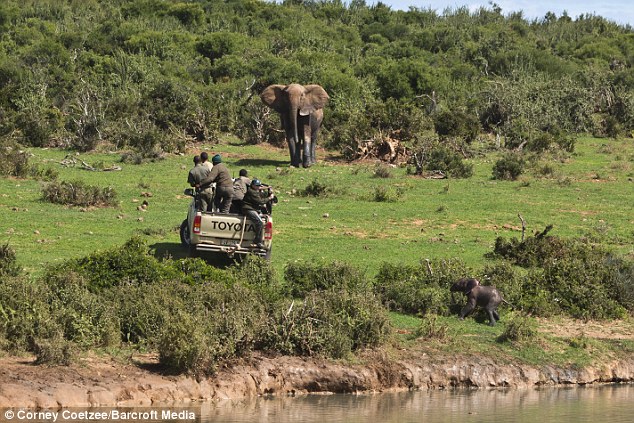 Face-off: The rescuers wait to see whether the adult will walk towards its calf – or charge their vehicle

‘This, unfortunately, agitated the distraught adults who moved the baby away from the noise and guarded the little one.

‘A number of the rangers got on to the back of one of the pick-up trucks and raced towards the adults, forcing them to run off into the forest around the edges of the dam.

‘Once they had the adults far enough away, two of these brave rangers jumped off the back of the truck and raced towards the water. 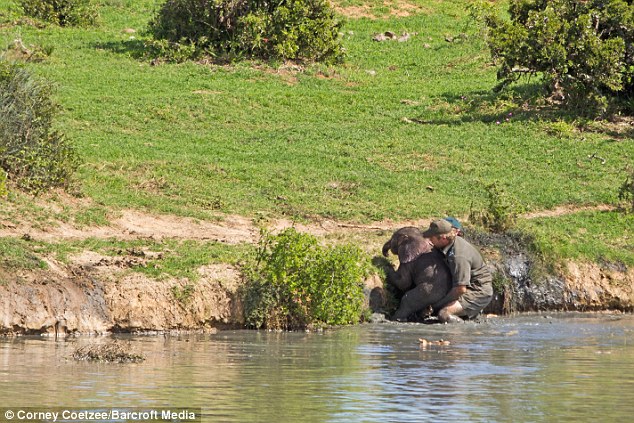 A bit of a leg up: The ranger struggles to heave the weighty calf out of the water before it drowns 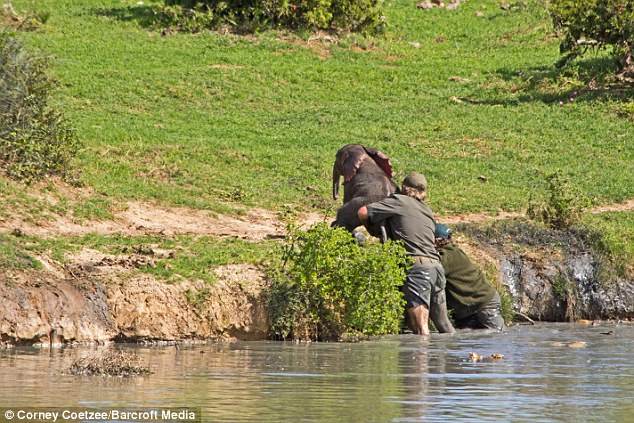 Two hands are better than one: Another ranger joins in and the animal is finally lifted on to the bank

‘With all their might they managed to grab this little baby and push it onto the banks. The little one was so tired that for a moment it could not get his legs up underneath him and it looked like he might stumble backward back into the water.

‘Luckily his rescuers were there to keep him from doing so, and more rangers rushed in from the side, to help him up.’

The pick-up truck moved away so that mother and child could re-unite but the baby elephant started to run after the rangers. 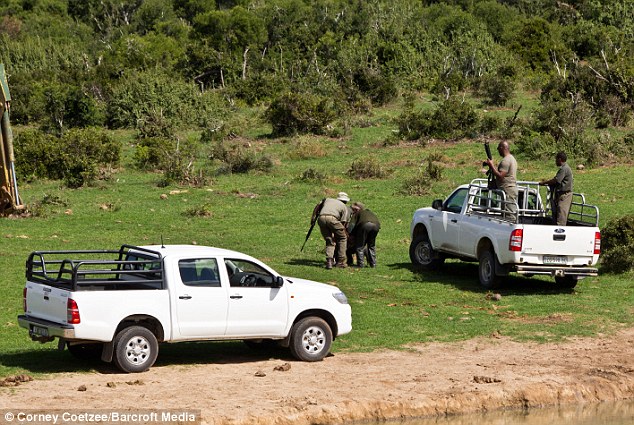 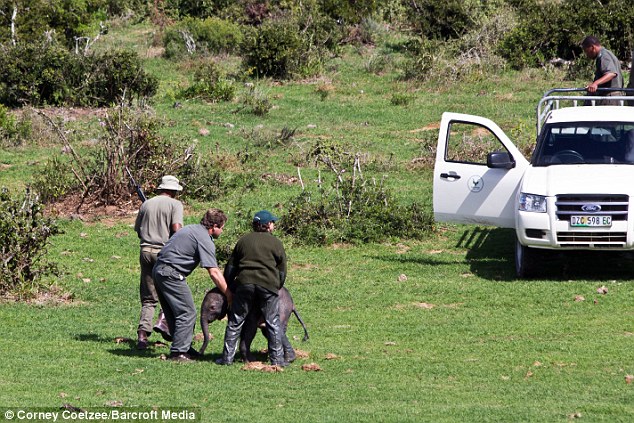 Corney said: ‘Another pick-up truck was brought in and rangers loaded junior onto the back and drove him to as close as they could get to mom without letting her get aggressive.

‘The truck stopped and the rangers quickly off-loaded their valuable cargo before jumping on the back and racing away.’

Then the calf’s mother made a dash to reach her baby and wrapped her trunk around his little chest.

Mother and child were reunited and the two wandered into the forest. 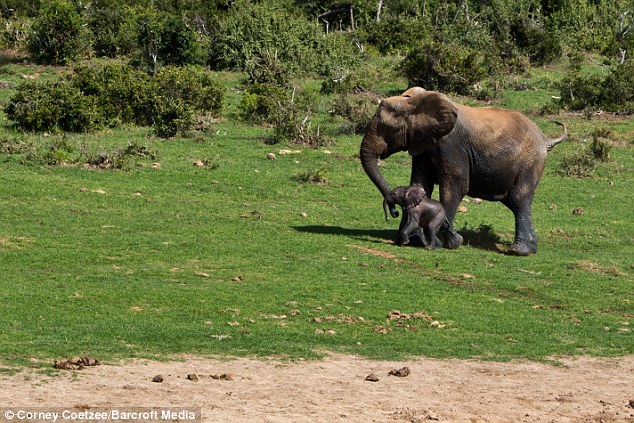 Happy ending: The mother rushes to be reunited with her calf and checks it over with her trunk 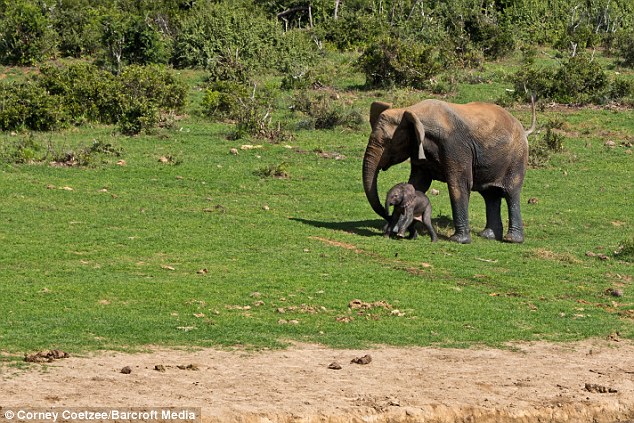 Lucky escape: This little creature is unlikely ever to forget its bathtime brush with danger

By IAN BROAD FOR MAILONLINE

Baby Elephant Could Not Stop Following Her Rescuer