There is no doubt that these festivals pass as completely normal for 99% of Swiss.

However, they may seem totally bizarre to you and you seriously wonder how anyone could have thought of this stuff. As it turns out, these festivals are the result of centuries-old traditions combined with Swiss people’s desire to simply have a good time. So, put on your diversity goggles and embrace the curious world of Swiss festivals! This March 1 festival is based on the popular children’s story “Schellenursli”, in which the protagonist retrieves a cowbell from a snowed-in chalet in order to participate in a parade like all the other kids.

So in the mountainous towns of Eastern Switzerland, boys will crowd the streets and create quite a “Bell Dorado”. The thought is that the louder the noise, the faster the green pastures will grow (and evil spirits will vanish)… This odd tradition dates back centuries: Every year on Fat Tuesday at 3:15 PM, hundreds of children and adults will gather in front of Rapperswil’s city hall.

In response to the mayor’s question, “Are all my boys here?”, the kids will effectively scream “One, two, goat leg!”

As a result, the mayor and council members will open up the windows and toss out sausages, loaves of bread and pastries into the crowd. Every year on the first day of the carnival, November 11, the town of Sursee celebrates what might most appropriately be called “goose pinata”. Odd as it seems, this custom was once very common all over Europe.

Essentially, young townspeople (!) will get themselves tipsy at city hall before covering their eyes and dressing up in a red cape with a gigantic sun mask. Using a saber, their main objective is to slam a dead goose to the ground with a single stroke.

No goodies inside the goose, though.

On New Year’s Eve and January 13, some freakish creatures will roam the streets of the Appenzell region in a quest for hot Glühwein.

Locals are quick to serve them because as the day drags on, they tend to get moodier (and thus scarier)… Our Christian was able to snap some pictures of this long-lasting Swiss tradition. 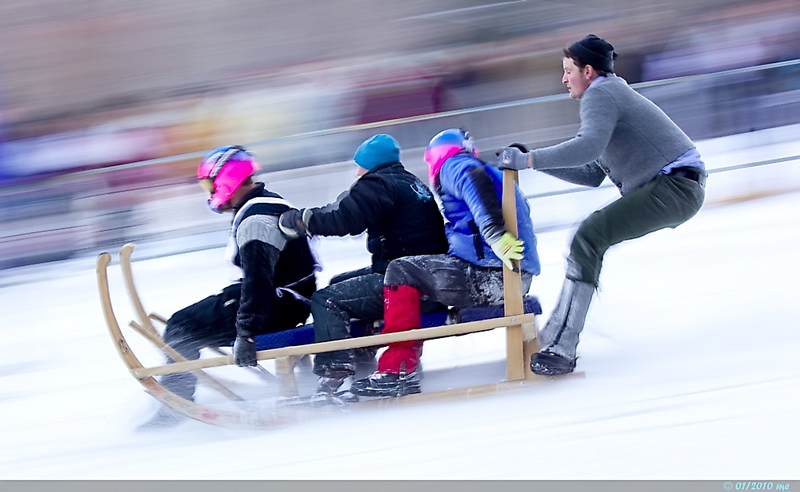 Although it may look amateurish, this annual event in Alt St. Johann has become more and more professional over the years.

While most participate for fun, some teams have perfected their sled racing techniques to inch out a tenth of a second here or there…

Does this require much explanation? Just take what Switzerland has plenty of (green pastures, cows, money), mix it all up, and outcomes “cow bingo”! This game is also known as “Cow Patty Bingo” or “Fertilizer Lottery”.

Have we missed anything? Have you run into some odd festivals in Switzerland? Do not shy away from sharing…