Young brother and sister lion cubs squabble in a play-fight as their father relaxes nearby.

When one of them picks up a stick, the other gets jealous and takes the fight to its sibling.

But Dad is in a tolerant mood and joins in the action, wrestling with them on the floor as his six-month-old cubs climb all over him. 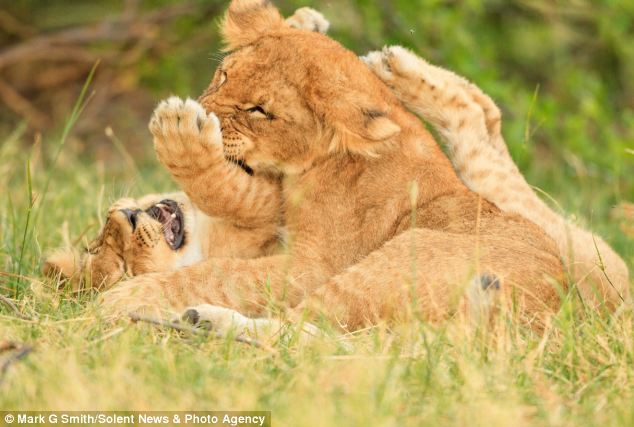 Get off me! The cub’s playfight like squabbling children, says award-winning photographer Mark Smith 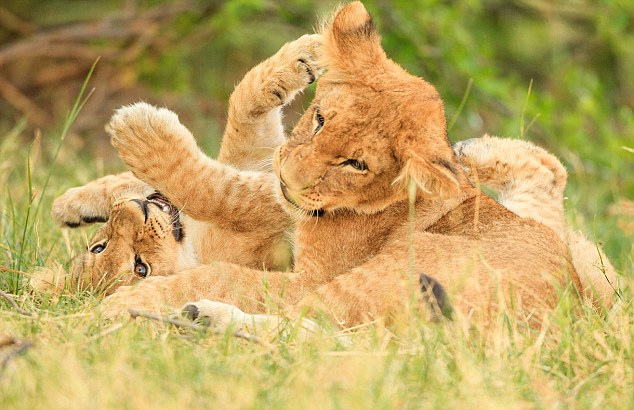 Award-winning wildlife photographer Mark Smith watched the cubs at play in the late afternoon sun in the Savuti area of Chobe National Park in Botswana in southern Africa.

After a long daytime nap, the cubs became restless, which meant Mr. Smith was treated to a fantastic insight into their behavior.

Mr. Smith, from London, said: ‘The brother and sister are wrestling and squabbling much like children do whilst the parents continued to nap ahead of nightfall.

‘In addition, there are some images with the cubs having a wrestle with Dad.

‘When cubs are small, males generally remain at a distance from the pride but older cubs are fascinated by their fathers, often approaching them and trying to play. 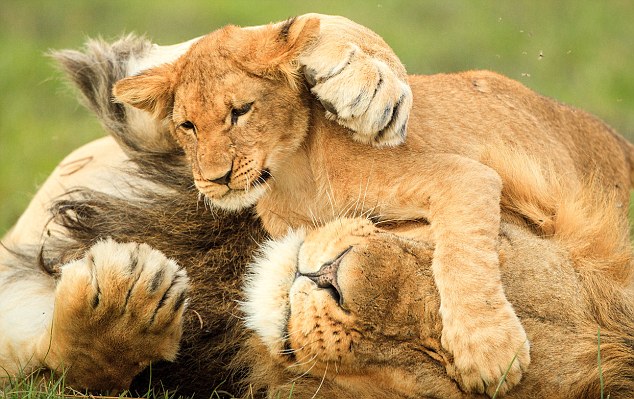 Get your paw out of my eye! One of the cubs clambers over his father’s face 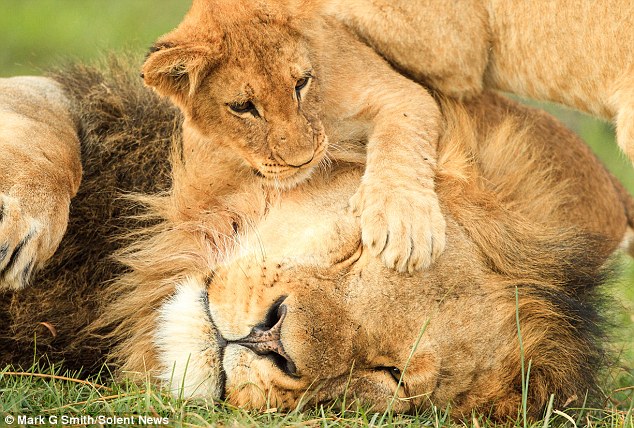 Get off! While Dad is helping his cubs to learn to fight and hunt, one day he and his peers will replaced as the coalition leading the large pride 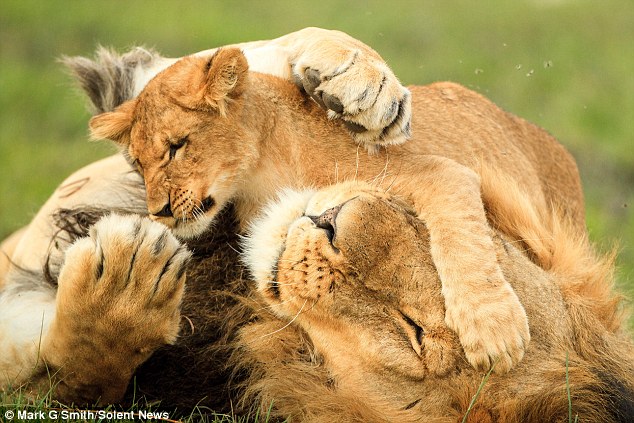 When I’m grown up …: Dad’s paw isn’t much smaller than his young cub’s head 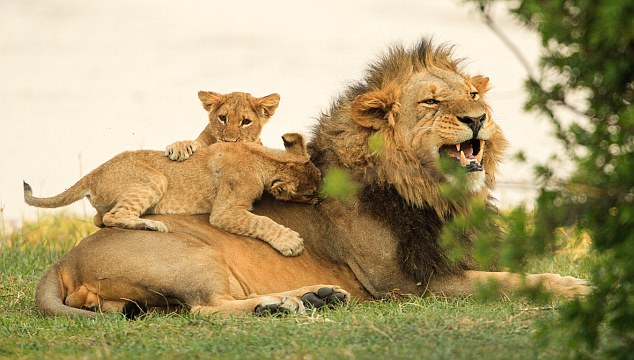 Come on, Dad: the cubs’ father must have been in a tolerant mood, observed Mr. Smith

‘This often results in either the lion telling the cub to go away or, if the cub is lucky and the lion is in a good mood, the male will play while teaching the cub fighting skills in the process.

‘Here, the cubs were just with Dad, who was in a very tolerant mood.’

The family belongs to an unusual 35-strong pride of lions which is run by a coalition of five males.

According to Mr. Smith, once a coalition has taken over pride, they usually have two years before losing to a younger coalition.

However, the larger the coalition, the better, because a coalition of four to six lions may last up to four years. 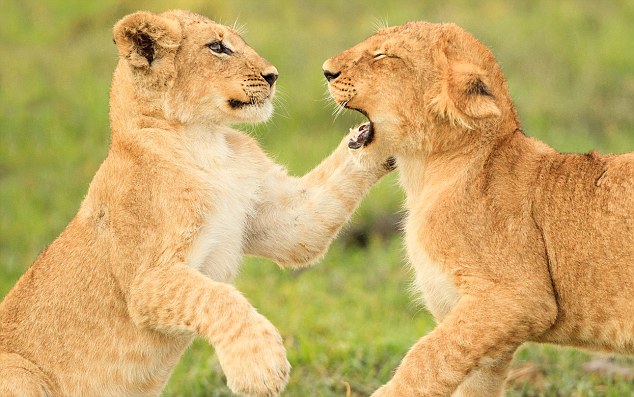 Take that! Brother and sister playfight in the cool of the late afternoon in Botswana’s Chobe National Park

He said: ‘Lions are intensely social cats while others are quite solitary which is largely an adaption of cooperative hunting strategies.

‘For that reason, lions are the cats you’re most likely to see socializing and playing with each other in large groups.

‘Like many animals, lion cubs learn from playing as they learn how to coordinate, control, and develop their muscles such as eye and paw coordination. 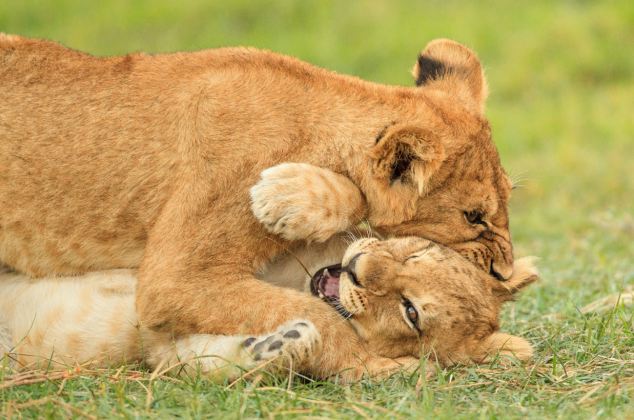 Lion down: after a long daytime nap the cubs had become restless 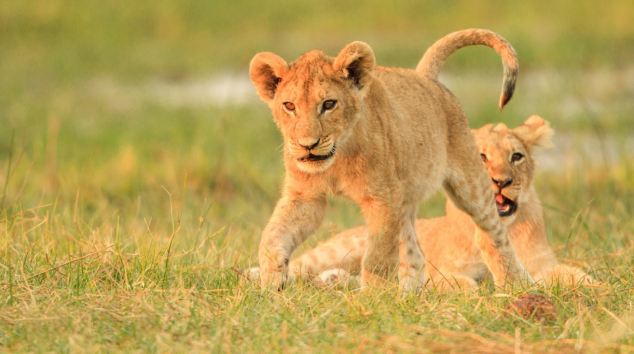 In training: the future top cats were learning skills that would stand them in good stead for hunting

‘Essentially it is preparing to learn how to hunt.

‘There were plenty of sticks around but once one had been selected, they both wanted it.

‘It’s likely the stick resembles prey or a toy and the wrestling over the stick is a cat way of demonstrating social ranking.’