When it comes to lesser-known central Portugal, it’s all about living the good life. Laid back, delightfully undeveloped and full of things to see and do, this is easy-going Portugal at its best. Whether you’re looking to extend your trip after visiting Lisbon, or just sample something different, here’s a taste of what’s on offer, all-around an hour’s drive from the capital. 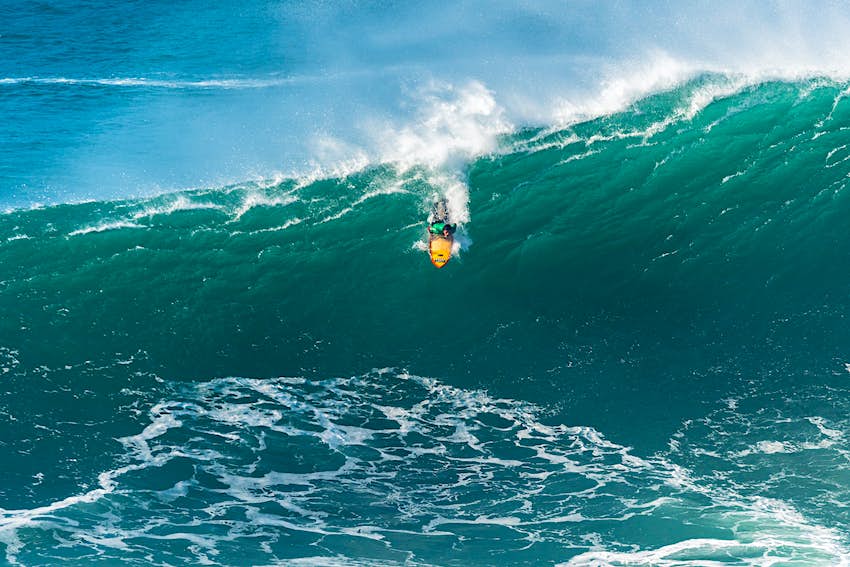 Portugal’s west is defined by the crashing waves of the mighty Atlantic Ocean. It’s created a rough and tough coastline that heralds the western edge of mainland Europe, lined with steep limestone cliffs and wide-open beaches, dotted with brilliant white villages.

In the central region, there’s an internationally-renowned stretch of wild water worshipped by surfers who return time and again, determined to conquer record-breaking waves. Scenes from Praia do Norte in Nazaré are famous the world over, while the annual Rip Curl Pro Portugal surf competition, which takes place at Supertubos outside of the peninsula town of Peniche 100km north of Lisbon, attracts only the best and bravest.

There are plenty of ways for novices to give surfing a go here, too. Countless surf schools can be found throughout the region, but for a stay combining eco-elegance, oodles of character, and passionate surf instructors in one, consider checking in to super-cool Noah Surf House. If the surfer’s life is not for you, stand-up paddleboarding, yoga and all-round healthy living are encouraged; as is enjoying a sundowner on the terrace by the fire pit. 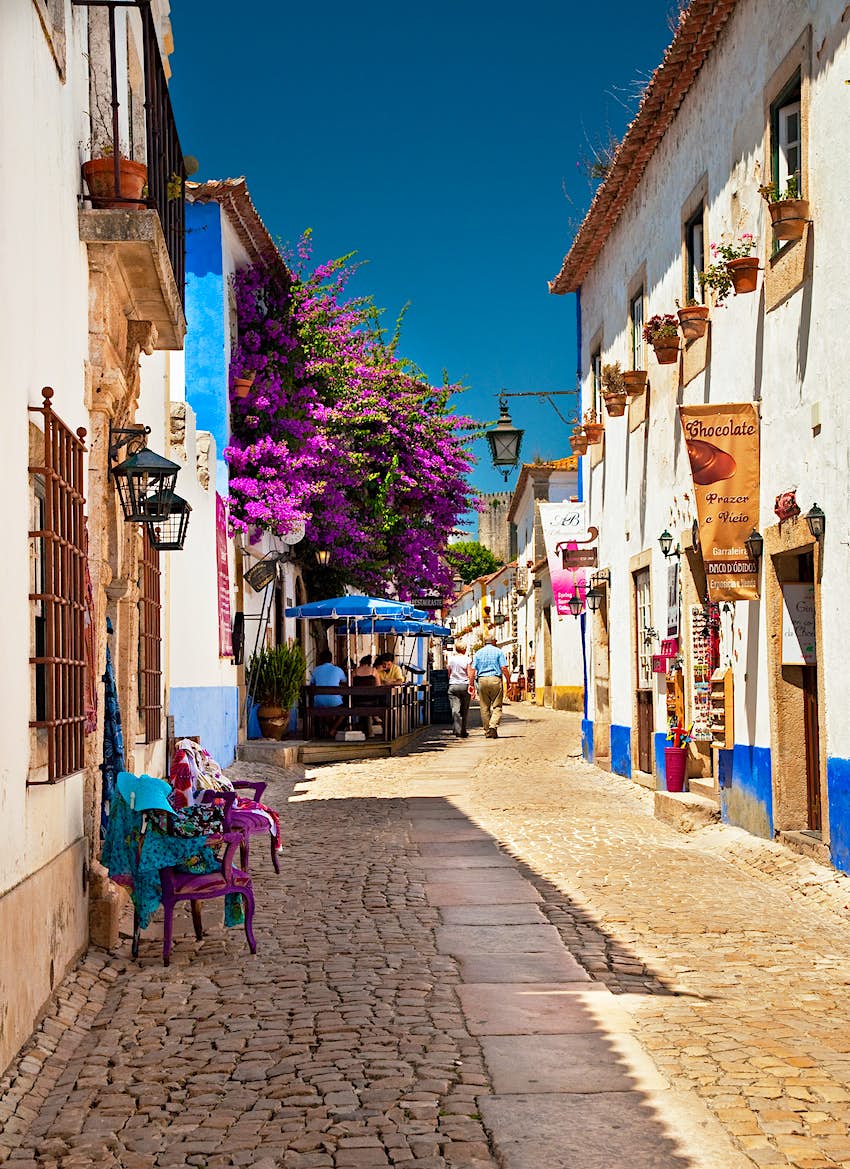 Óbidos, around 87km north of Lisbon, ticks every box in the pretty historic town category. Whitewashed houses draped in bright bougainvillea flank cobbled streets that lead up to a 13th-century castle, all tightly wrapped in medieval walls. Adding an extra feather (or should that be quill) to its cap, Óbidos is also a City of Literature, one of only 28 in the world bestowed with the title by Unesco.

Popular though it may be, it’s romantic to the core with no fewer than 12 bookshops. Don’t miss the Livraria de Santiago bookstore inside the Church of St James or the Biological Market, a perfect blend of fresh produce and tempting reads in a variety of languages. Browse your way around the town before giving in to a snifter of ginja – a potent Portuguese liqueur often served in mini chocolate cups but just as good in a glass.

Whether you’re staying or passing through, call by The Literary Man, a hotel with a rustic collection of boutique rooms and a seriously good restaurant whose walls are thick with classic and contemporary publications. Not only does it serve fantastic food (from a deliciously simple octopus carpaccio to prawns that are tangy perfection), it also succeeds at being both sophisticated and endearingly fuss-free.

In true Portuguese style, Óbidos loves a celebration: go in May for the tasty International Chocolate Festival, July for the elaborate Medieval Fair and October for the Folio Literature Festival.

Leafy Caldas da Rainha is somewhat overshadowed by neighbouring Óbidos. Although only about 10km away, many whizz past without stopping to discover the history and culture of this small, colourful city.

Founded on hot, sulphurous springs in 1484, Caldas da Rainha is home to the world’s first purpose-built thermal hospital. The pungent springs still flow today and the hospital doors remain open so you can buy a ticket for a peek at the thermal baths that gave this city life.

While wellness is firmly at its heart, Caldas da Rainha is also known for its ceramics, and there’s one man in particular to thank for his clay legacy. Rafael Bordallo Pinheiro was, among other things, a 19th-century sculptor, renowned for his attention to detail. And he’s left his mark all around the town.

Today, the Rota Bordallo honours him with an easy-to-navigate trail that ticks off ceramic street art, including beautiful tilework, lifelike vegetables and wildlife; pick up a map at the centrally-located tourist office. Top tip: look up. Many of the glazed creepy crawlies can be found slithering up walls or hanging from trees – Monkey Village in the corner of Dom Carlos I Park is a highlight.

If you’re especially interested, this route is just one of a number of dedicated ceramic trails throughout the central region.

Shifting sand dunes, fragrant pine trees and windmill-studded hillsides combine to create a natural, if wind-whipped, slice of the Iberian Peninsula loved by adventurers. Whether you’re wowed by the invigorating sea air and ocean views, rocky peninsulas or mountainous trails, you’ll be itching to get out and about.

Luckily there are many ways to do just that from water sports to hiking, cycling to sailing. Take your pick from the region’s natural parks, including the archipelago of Berlengas, a marine reserve off the coast of Peniche where you can expect to see a variety of migratory and resident seabirds.

Then there’s Foz do Arelho, 15km northeast of Óbidos, where a clever boardwalk takes you over the dunes without damaging the precious ecosystem of the sands. Its shores are also lapped by the waters of the Óbidos Lagoon, beloved by local fishermen, kitesurfers and flamingos alike. Take to the water with InterTidal for a breezy sunset excursion to remember. 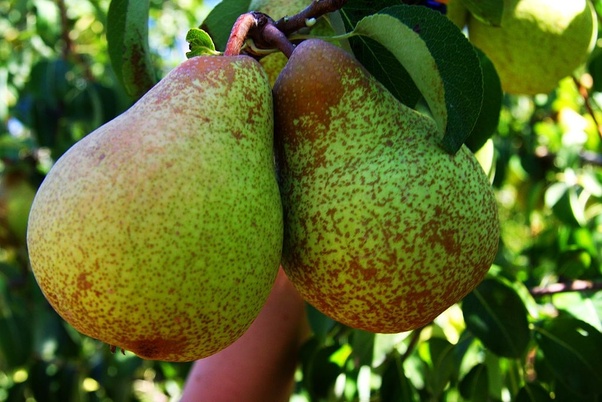 With the giant larder of the Atlantic Ocean, seasonal fruit and veg, tangy sheep and goat’s cheese, and a never-ending supply of sweet treats, you’re in for a flavoursome feast in the central region. Seafood certainly dominates: whole grilled fish served with roasted veg is found widely, as well as rich fish soup, prawns and clams sizzling in garlic, and the Portuguese speciality of cod baked numerous ways.

It won’t take long for you to spot the rolling stripes of vineyards, either. Although not new to the area, wine production here has been refined over the last few decades, ensuring there’s a tipple for everyone, be it from established award-winning estates such as Quinta do Gradil or young, up-and-coming producers such as Quinta Varzea da Pedra.

As is the way in this region, tours are relaxed and informal. Stop by the likes of Quinta do Gradil for a short tour of its winery followed by a suitably paired meal in its excellent restaurant. For an even more immersive experience, go in September to take part in the harvest – bare-foot grape treading mandatory.

The Most Beautiful Places to Visit in Madeira, Portugal