Romantic Schwerin, with its renowned palaces and lakes, is just the right place for you if you are planning a quick getaway with your partner. The eternal Schwerin Palace, located on Lake Schwerin, draws large crowds throughout the year, is well maintained and still possesses its charm.

Schwerin is located within the metropolitan region of Hamburg and close to Berlin and to nearby regiopolises, Rostock and Lübeck. it also has well-known museums, galleries and zoos, which attract many tourists, year-round.

Read on to find out about the top 9 things to do in Schwerin, Germany:

1. Be amused at the State Museum (Staatliches Museum)

The Staatliches Museum Schwerin or the State Museum Schwerin is a world renowned art gallery and a museum, located opposite Schweriner Schloss. It was established by Frederick Francis II, the Grand Duke of Mecklenburg-Schwerin, in the year 1882 and it is a very important repository for state-owned, natural history collections.

It is nationally known for its medieval collections, including the Neustadt Altarpiece and its 17th century Dutch and Flemish collections. The Staatliches Museum Schwerin owns one of the most significant collections of French-American artist Marcel Duchamp, in Europe.

2. Refresh yourself at Lake Schwerin 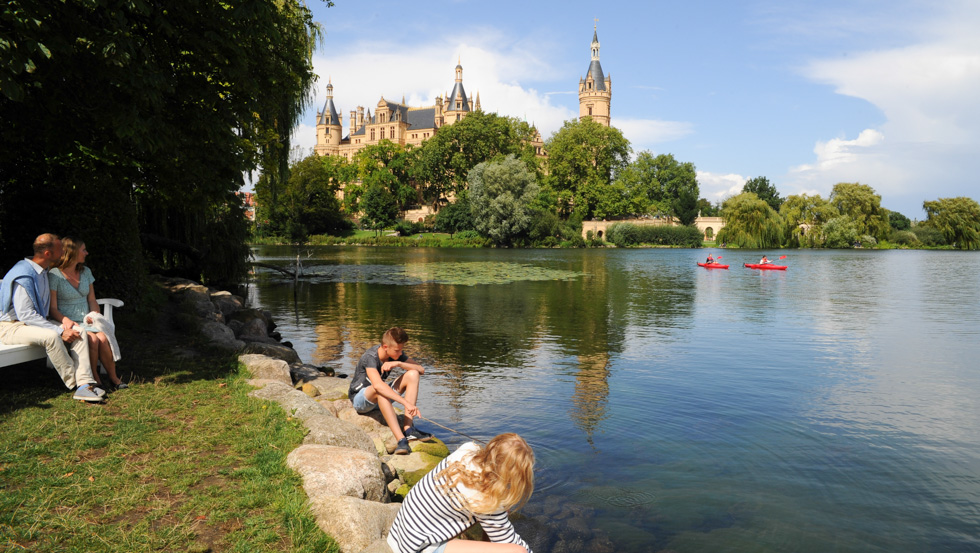 Lake Schwerin is about half of the size of its nearest lake neighbor, the majestic Müritz lake. Surrounded by other smaller lakes, it is famous for its bird sanctuary, and the rainbow trout that swims in its very deep water. It has the honor of being the second biggest lake in North Germany and also the fourth largest in the country. Visitors flock here throughout the year and this place is also quite popular among the locals, who come here with their families and have picnics along the lake.

Schwerin Cathedral is a Roman Catholic cathedral as old as Schwerin itself, it is dedicated to the Virgin Mary and Saint John. The cathedral is a historic and dramatic place to visit. It has a tower from where you can see the beauty of Schwerin.

it was first built of timber and the foundation stone of the stone cathedral was laid in 1172. After a construction time of seventy-six years, it was consecrated in 1248. Tt is now the church of the Bishop of the Evangelical Lutheran State Church of Mecklenburg.

Allegedly in 1222, the Count Henry of Schwerin on returning from a crusade with a holy drop of Christ’s blood which was contained in a jewel. This was then placed in the cathedral and is now a place of pilgrimage. 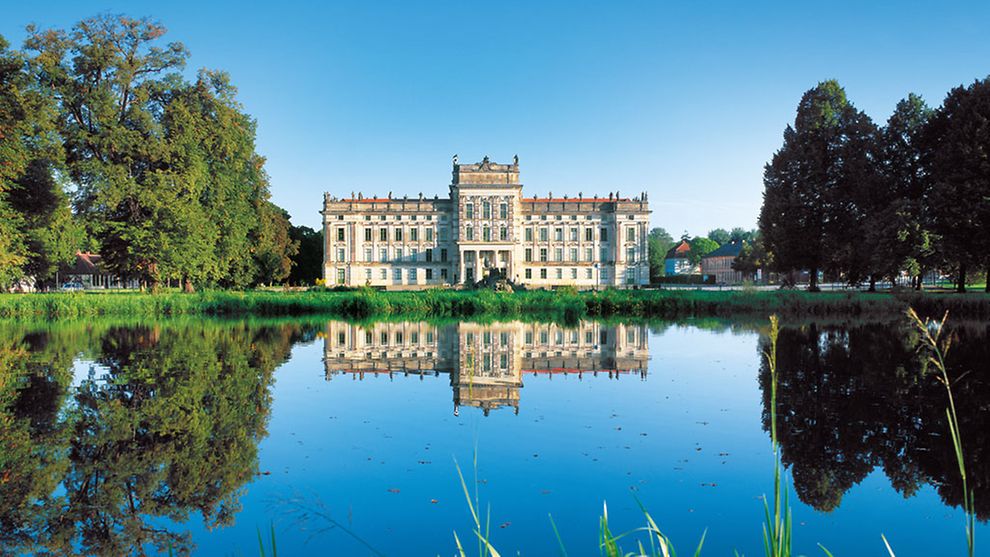 Ludwigslust Palace is a luxurious stately home in the town of Ludwigslust, in Mecklenburg-Vorpommern, in the northern part of Germany. This palace has a huge collection of courtly art and artifacts of the aristocracy of past centuries, including royal paintings, palatial furniture and fine décor.

The castle is the beautiful centerpiece of a baroque city complex and is still fully preserved. It served as the main residence for Duke Friedrich and Grand Duke Friedrich.

5. The Zoo in Schwerin

The Zoological Garden Schwerin is a medium-sized zoo, with about 2,400 animals in 154 species and sees almost 138,000 visitors a year. Open year-round, the animal park stretches between the south bank of the Schweriner See, the Lazy Lake and the residential area of Großer Dreesch and covers an area of about 25 hectares (61.8 acres).

The Schwerin Zoo participates in the European Conservation Program (EEP) and works for the preservation of several species, including the rhino, tiger, giraffe and a further 11 species. With its zoo school, the zoo offers courses in natural sciences, art, English and zoological subjects for students in all grades. 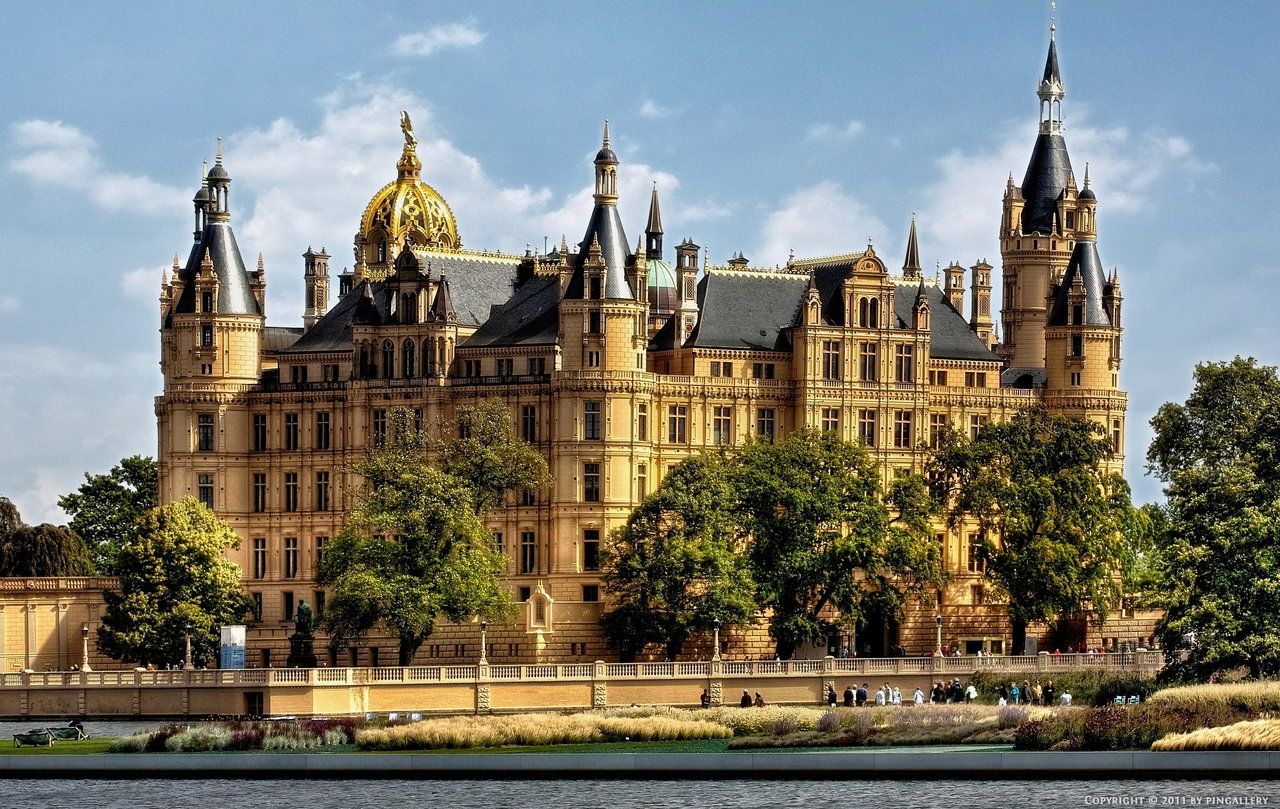 Schwerin Palace, also known as Schwerin Castle, is a foremost example of European architecture and is to become a World Heritage Site. It is located on the city’s main lake, Schwerin See or Schwerin Lake. The palace was the stately home of the dukes and grand dukes of Mecklenburg and later the Mecklenburg-Schwerin. Now it serves as the residence of Mecklenburg-Vorpommern state parliament.

The finest examples of craftsmanship are found in the 653 rooms of the palace, which are works of magnificence. Most of them are built with marquetry floors, fine carvings, with gilding and ceiling stucco work. A fascinating piece of architecture is the throne room, with its columns made from Carrara marble and cast-iron doors. Near Schwerin Palace, you will find a statue of Herakles, or Hercules, taming the Cretan bull. The statue of Hercules stands near the castle, overlooking the water, in a breathtaking scene. Many people already know that the German people love Hercules, and so when the choice had to be made regarding what statue to place at the gate, between St. George and Hercules, the latter was chosen, as Hercules depicts victory. The Berlin sculptor August Kriesmann created the sculpture, in 1853.

8. Shop till you drop at Schlosspark-Center Schwerin

The Schlosspark-Center Schwerin is a mall, with a good location and with a great selection of stores for everyone. With stores for children as well as many high-end branded shops, there are also many shops that cater to reasonably priced brands, like New Yorker, Only or Vero Moda.

There is also a supermarket, a drugstore and an electronics store in this mall and another attraction are the many Pokemon and Pokestops that can be found here, for the Pokemon Go lovers.

The Groß Raden Archaeological Open Air Museum is near the town of Schwerin and near the lake of Radener See. There is a circular castle here, visible from afar. From the year 1973 to 1980, there were extensive excavations carried out here, led by Ewald Schuldt, who unearthed the remains of a Slavic settlement, dating back to the 9th and 10th centuries.

The fort has been redone according to the excavations and is established as an open-air museum, which attracts thousands of visitors every year.

Schwerin – the eternal land of palaces and castles

Coming to Schwerin is like entering a fairyland, full of palaces, castles, royalty and art. It will instantly transport you to a bygone era and yet, there is modernity in Schwerin, which will give you the comfort of any modern city in the world. There are lakes, parks and zoos, all around, which charm visitors and make them come back, every year.