Portugal, maritime power and great empire at its peak, has a complicated history that matches its spectacular landscapes. Azure beaches, dramatic geography, and warm people combined with Port wine and a lot of codfish are some of the reasons to visit. To experience authentic Portuguese life, we must visit the small towns to see how their inhabitants fought off countless i.n.v.a.s.i.o.n.s and set off to explore the world.

Albufeira started out as a small fishing village in ages past. The Roman-built a castle here, of which only traces of the tall defensive walls remain. When the Moors conquered it, they named it Al-Buhera, meaning “Castle-on-the-Sea,”. This is where the modern name comes from. High on a hilltop behind the town are the ruins of the Castello de Paderne. The Moors built it in the 12th century to defend against the Portuguese. It was captured after a massacre. On a lighter note, the town has retained its old core and architecture. You should visit the archaeological museum, which is full of relics from all periods of Portuguese history. There you can learn more about the famous battles which defined the region. Or if it’s the adventure you’re after, visit the marina. From there you can explore the coastline riddled with navigable caves on boat tours. 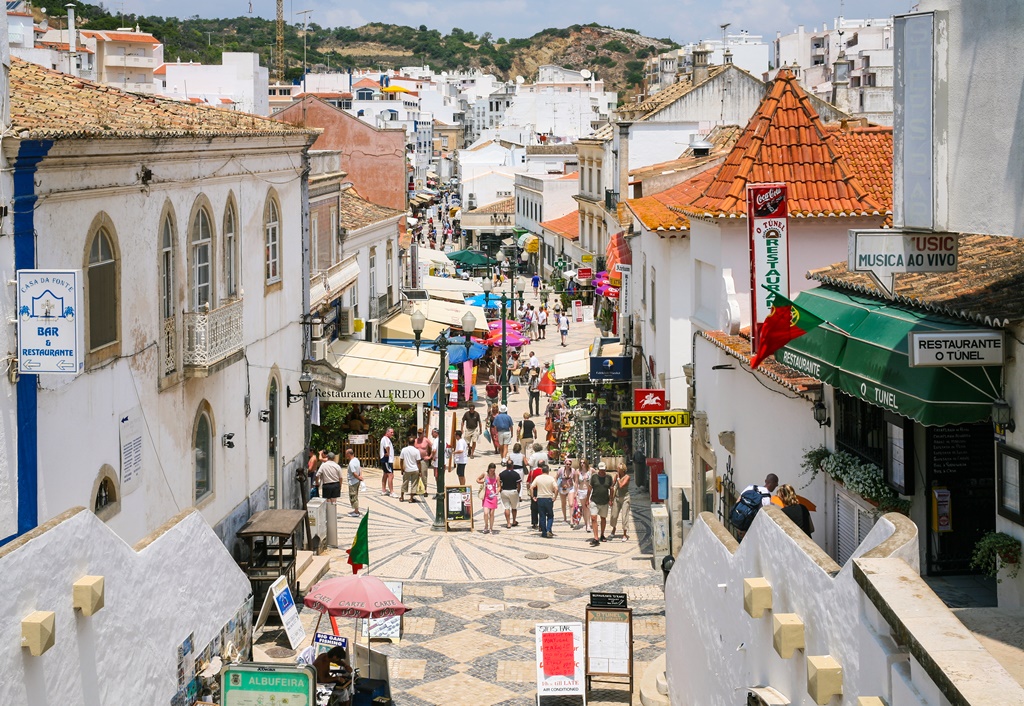 Lagos has a long history. Its location in the center of Portugal’s southern coast made it important in the Age of Discovery. Many caravels (a small, very maneuverable type of ship) were built in the town. From there they set sail to explore Africa, Asia, and the New World. To witness some of this history, visit the Portuguese Discoveries Wax Museum. It is situated in the town marina, and it depicts the whole Age of Discovery in 16 key events. Europe’s first s.l.a.v.e market was set up in Lagos in 1444. A museum called the Mercado dos Escravos (s.l.a.v.e market) now stands in its place. Moving on to kinder places, Saint Anthony’s church is believed to be the birthplace of one of Portugal’s famous saints. Inside are unique wood carvings covered with gold and guides can tell you all about Saint Anthony’s story. Lagos has a natural treasure too, the Ponta de Piedade. A scenic spot full of natural rock formations and caves. You can visit it by boat or descend a staircase carved into the cliff face and explore it on foot. 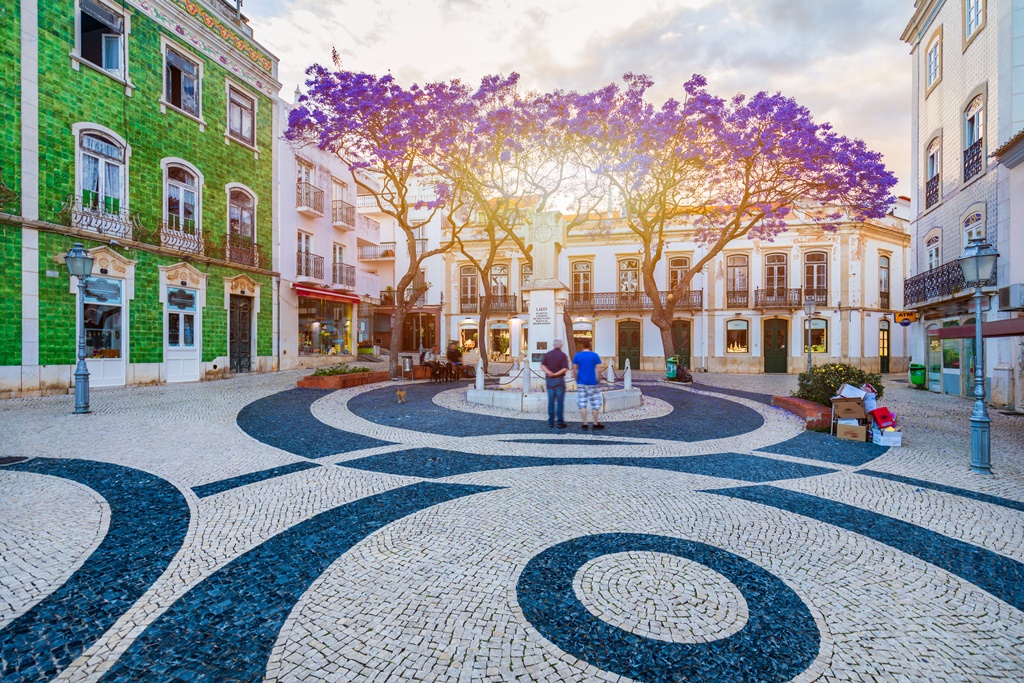 Majestic palaces and castles hide among the forests, parks, and hills of Sintra. A UNESCO World Heritage site whose palaces used to be the private retreat of royalty of all kinds. Most famous is the Palácio da Pena. Big, colourful and whimsically styled. The palace used to be the summer residence of the Portuguese royal family, today it is used for state functions. Its architecture is a mix of Gothic, Moorish and Renaissance styles. It looks like something out of a fairy tale. The Castelo Dos Mouros is a very different story. The Moors built it in the 9th century to guard the town. The castle’s towers and ramparts have been preserved and it’s high vantage point offers great views of Sintra. South of the town, on the Atlantic coast, lies the Boca do Inferno (en. Hell’s Mouth). A scenic cove surrounded by cliffs within which is an open cave. From there you can watch the sun sink beneath the waves at sunset. 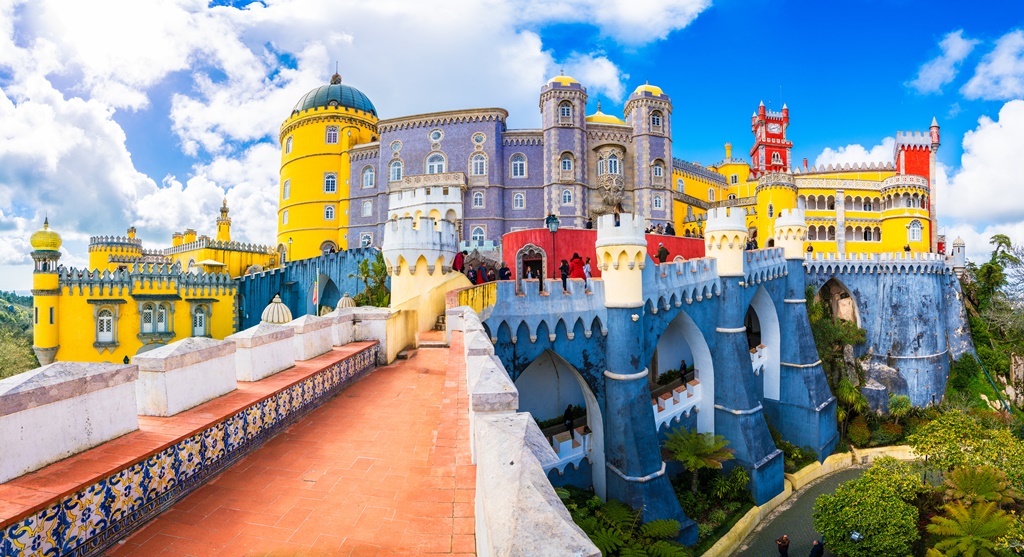 Portimao is a classic example of a Portuguese working town. Locals have always lived off the sea, with fishing and canning being primary industries. As such, there are many murals on the walls of buildings and on squares depicting scenes from everyday life of sailors catching fish. The town is known as the “sardine capital of the Algarve” and its restaurants offer delicious fish and other seafood. An interesting place to visit is the Museu de Portimao which is housed in an old canning factory. It tells the history of the town and is home to all kinds of archaeological exhibits. To wrap things up you should visit the Jardim 1º de Dezembro. It’s a unique square depicting important occasions in Portuguese history through beautiful azulejo tile shrines. Some of these are: the first Portuguese constitution from 1820, the discovery of Brazil in 1500, and Portugal’s independence from the kingdom of León in 1143. 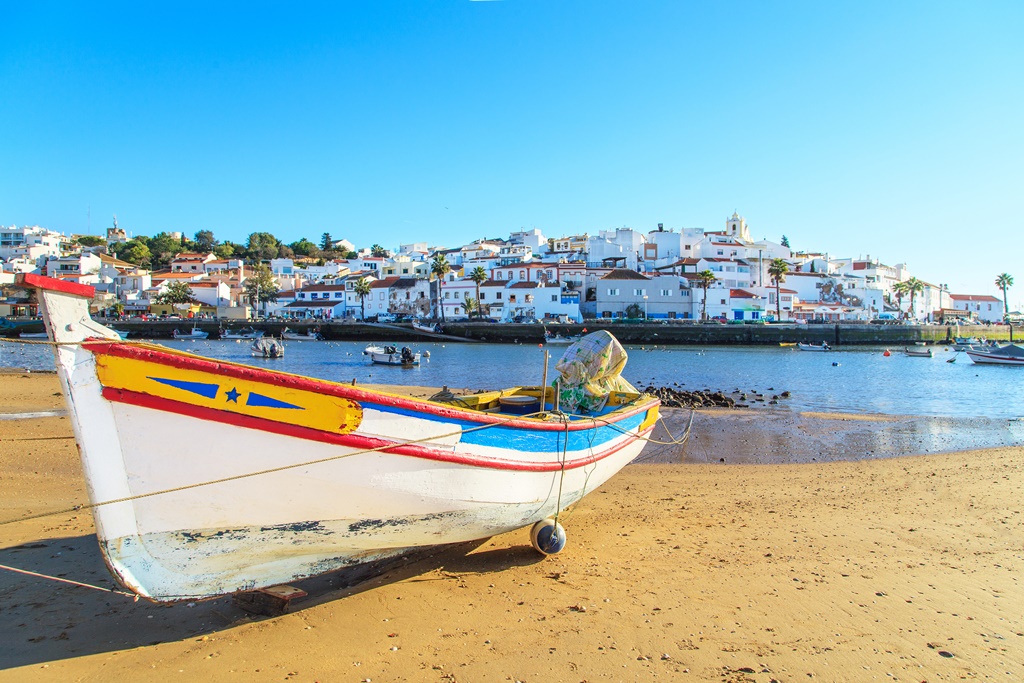 Wondering how the country of Portugal came to be? You can find it out in Guimaraes! This town is a special place because it’s where Afonso Henriques (the first king of Portugal) was born. Afonso achieved the independence of the Kingdom of Portugal, after expelling the Moors and fighting off the Kingdom of León. After his victory in the battle over the Leonese, on the banks of the River Vez, he founded the new kingdom. Thanks to the Reconquista he doubled its size. Monuments to these events, also known as Portugal’s first War of Independence, are spread out around the town. You must visit the plaza Largo da Oliveira where the old town hall and the Collegiate church are located. They are surrounded by traditional Portuguese painted houses and cafes. To round out your experience, you should visit the 1000-year-old Guimaraes Castle. Built as a fortress to defend against invading Vikings from the north and Moors from the south. It served as the royal residence for centuries. 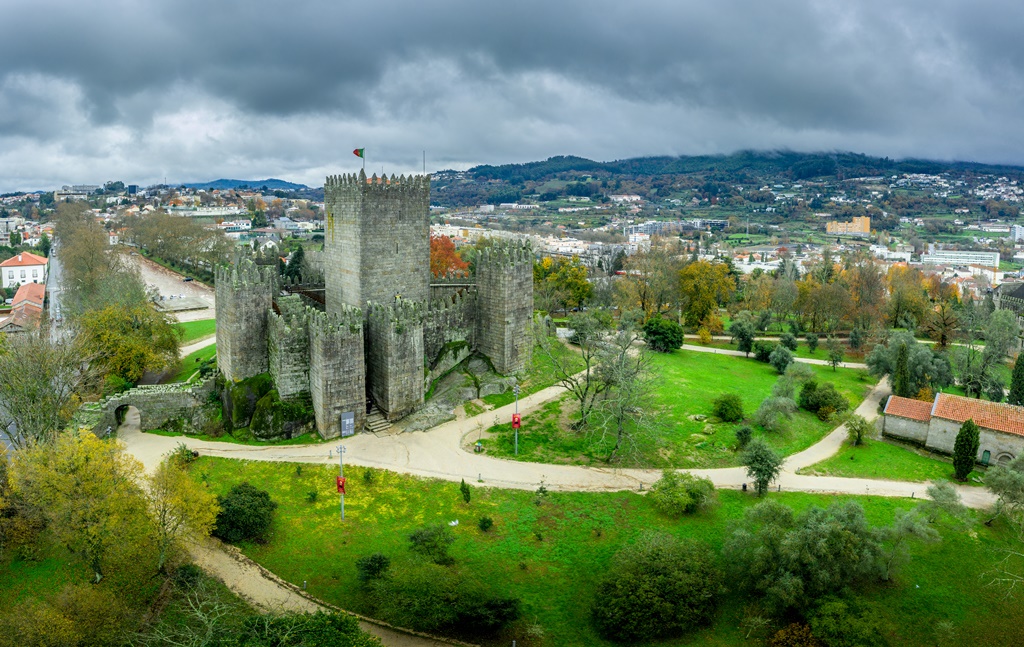 The village of Monsanto is unique in the world. Not only does it hang off a mountaintop but it’s also full of giant boulders. Some of which have been carved and turned into houses. Some of the buildings including the church and some houses are built in the Portuguese late Gothic style. For this, the village was voted “most Portuguese village in Portugal” in 1938. The geographical position of the village, overlooking a vast plain, made it a strategically important location throughout its history. During the Reconquista, King Afonso Henriques took Monsanto back from the Moors. In 1165, the king granted it to Templar monks who built a castle there as a base of operations. Sadly, it was destroyed by an accidental explosion in the munitions storeroom in the 19th century. The ruins can be visited today. 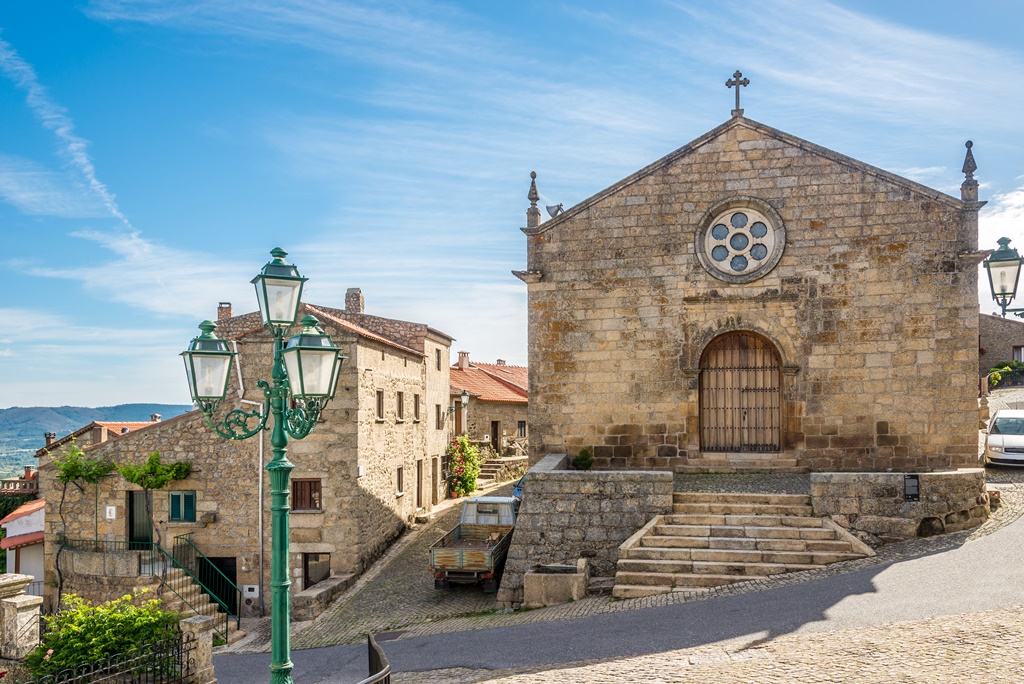 Known as the prettiest town in the Algarve, Tavira is where you can see what a traditional Portuguese city is like. The buildings are mostly white-walled with red terracotta roofs, which are characteristic for most Southern European towns. Inside the city is the Igreja de Santa Maria do Castelo, a church housing the tombs of seven knights. According to legend, these knights were ambushed and killed by Moors. This gave the Portuguese a reason to retake the town. Behind the town atop a hill is the Tavira castle, a ruined Moorish fortress where the sight of the city is worth the hour-long walk it takes to get there. South of the town is Barril beach, where the Cemetery of Anchors is located. The anchors were left behind to honor the dead of Portugal’s fishing industry. The unpredictable waters where the Atlantic meets the Mediterranean used to teem with tuna and fishing was always a dangerous profession. 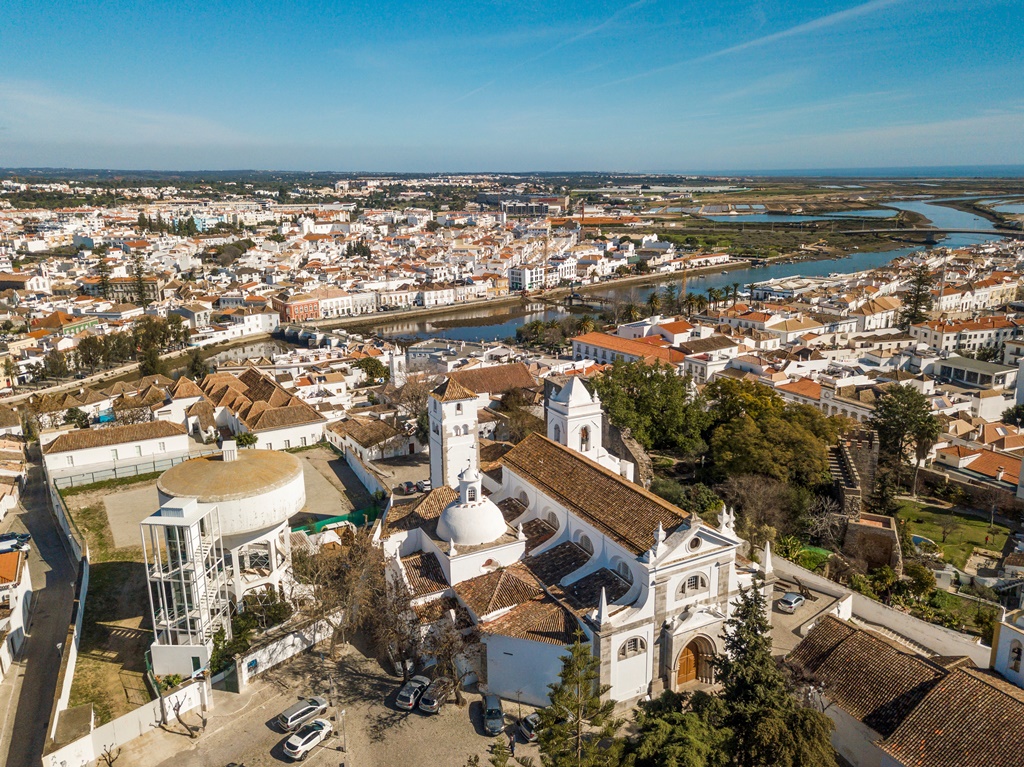 The town of Coimbra is the center of history and academic life in Portugal. Afonso Henriques and Sancho I, the first Portuguese kings, are buried here. All over the town, you will find monuments with a story to tell. The Joanine Library is one of the most beautiful Baroque libraries in Europe. King John V (a great patron of culture and science) had it built to facilitate academic development. The Santa Clara Monastery is a monastic building which houses important archaeological findings. Queen Elizabeth of Portugal had the monastery opened in 1314 for the city’s nuns. The last feature of Coimbra is its university, one of the oldest in the world. It earned UNESCO World Heritage status, for its preserved cultural traditions, and historical buildings. One of these is the University Tower, whose bells have been regulating academic life since the 1600s. The tower was built in 1537 after the university convinced the king that “there could be no order without a clock”. Since then, the bell’s toll has signified the start of study hours. According to university tradition, first-year students cannot be on the streets after the bell tolls, or else. 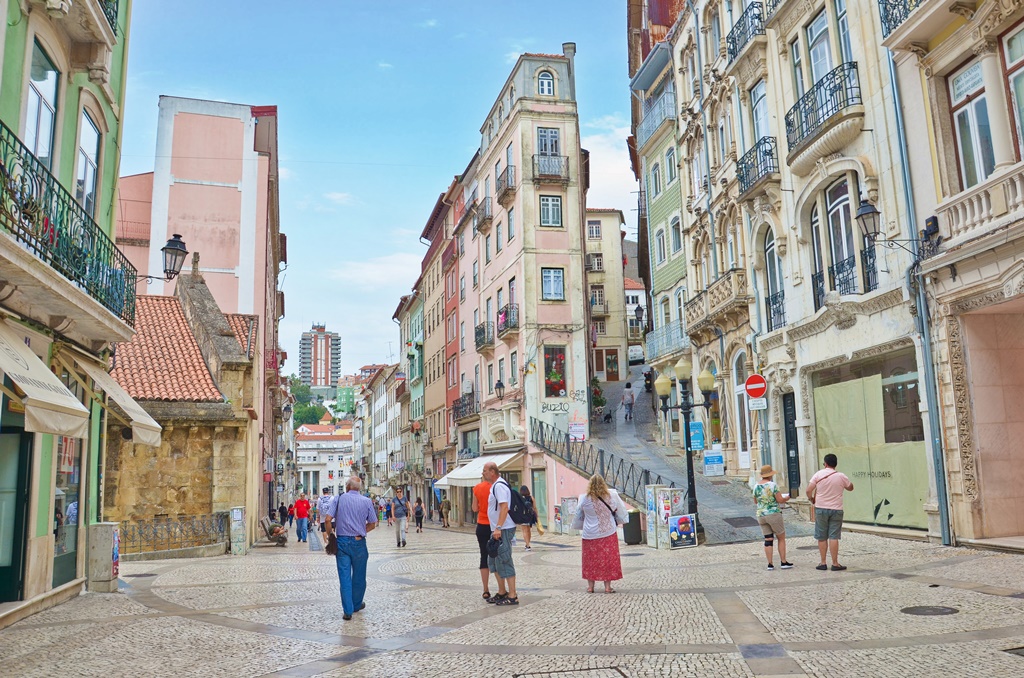 What happens when you combine the largest underwater canyon in Europe, some of the biggest waves in the world and sandy white beaches? You get Nazare, a world-famous surfing destination! Garret McNamara, an American legend, broke the world record at the time for surfing the biggest wave in the world (23.77 meters) at Nazare in 2013. Fearless surfers and stunning sunsets are the top reasons to visit this sunny town. But not the only reasons. Within the town, among the narrow cobblestone streets lies a shrine memorializing the legend of an ancient miracle. One foggy morning a man was out hunting on his horse and he spotted a deer. As his mount galloped after the prey the man realized he was on a cliff. He could not see the edge because of the heavy fog. He remembered there was a shrine to the Holy Lady of Nazare nearby and called out for help. His horse came to a stop right on the edge of the cliff. The man thanked the heavens for sparing his life and told his story to the townsfolk. That spot is now called the Point of the Miracle. Fortunately, the shrine is still there, attracting many visitors. The cliff edge provides a beautiful view of the Atlantic ocean. 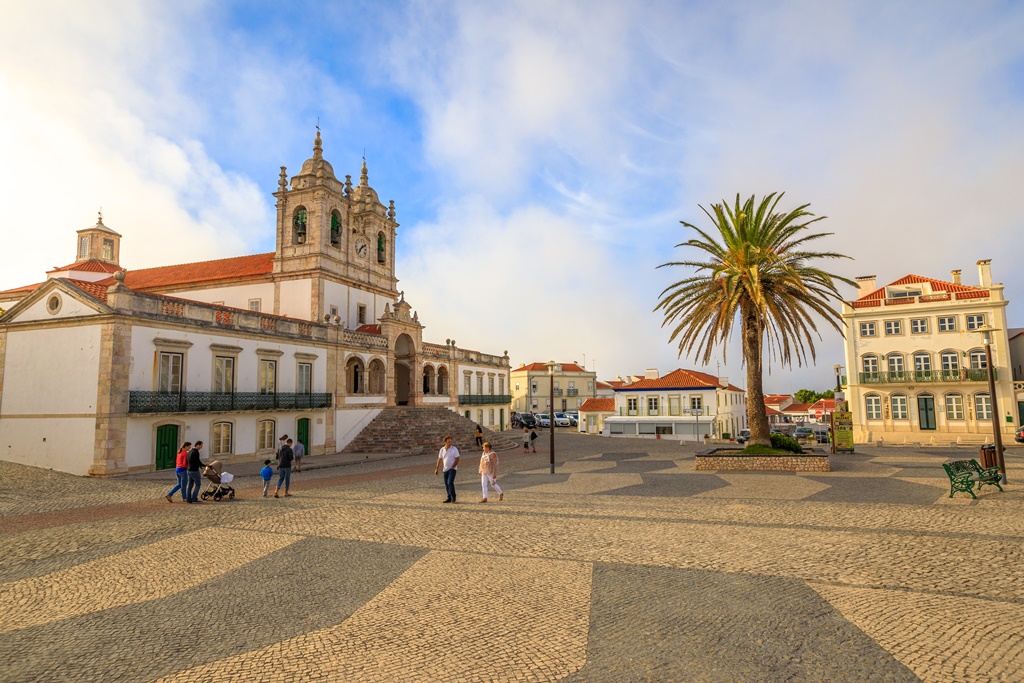 Almeida is a star-shaped town with a martial history. Its name derives from the Arabian al mêda, which means “the table”. According to the legend, a lavish table adorned with precious gems used to stand in the town. It is located in a high plain overlooking a river, near the Spanish border. Its strategic location is the reason for the fortification. In the 12th century the second king of Portugal, Sancho, captured the village from the Moors. Three kings after him added additional fortifications, the village was lost to the Spanish and retaken by the Portuguese many times over the centuries. These days a 2.5 km long, twelve-pointed, star-shaped wall surrounds the town. This is why the village was a very hard nut to crack. Within the village is the Fortress of Almeida, a national monument built to withstand brutal sieges. It has a ditch which is 12 meters deep and 62 meters wide, another layer of defense in case the walls gave way. 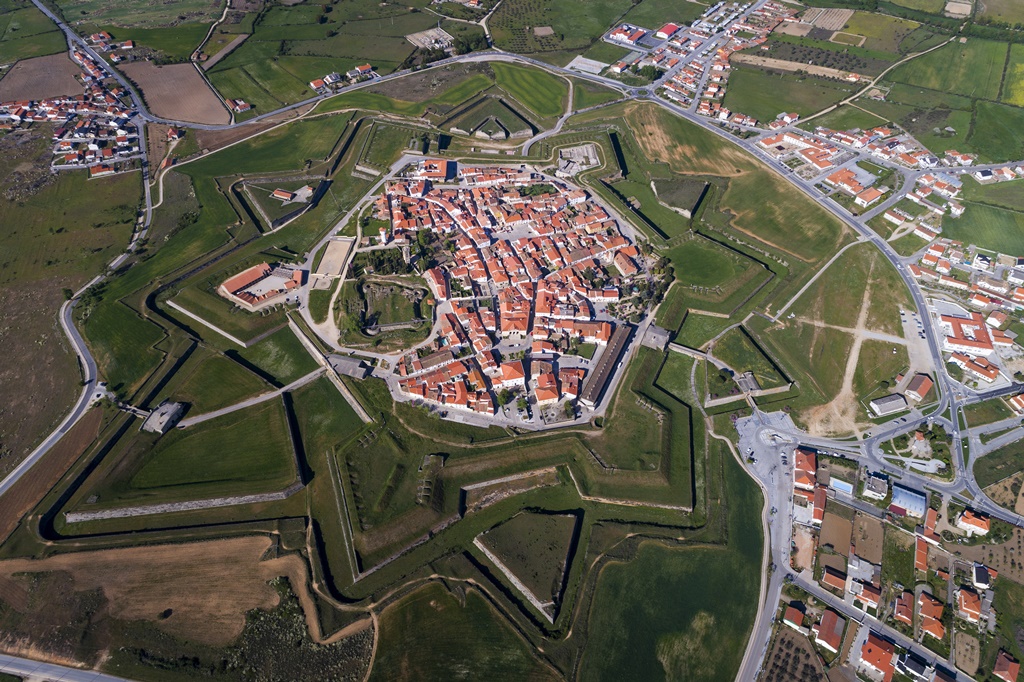 The Most Stunning Portugal Islands You Should Visit

The Best Things To Do With Family In Portugal