Rimmed by mountains of myth and sitting astride the shores of its eponymous lake of the bluest blue, Lucerne is every bit as gorgeous as it was back in the 19th century when Goethe, Wagner and Queen Victoria eulogized its beauty. Slow travel comes naturally here, with boats, trains and cable cars breezing across the lake and up to nearby Alpine heights. From the birthplace of the nation to sky-scraping glaciers, here’s our pick of the best days out from Lucerne. 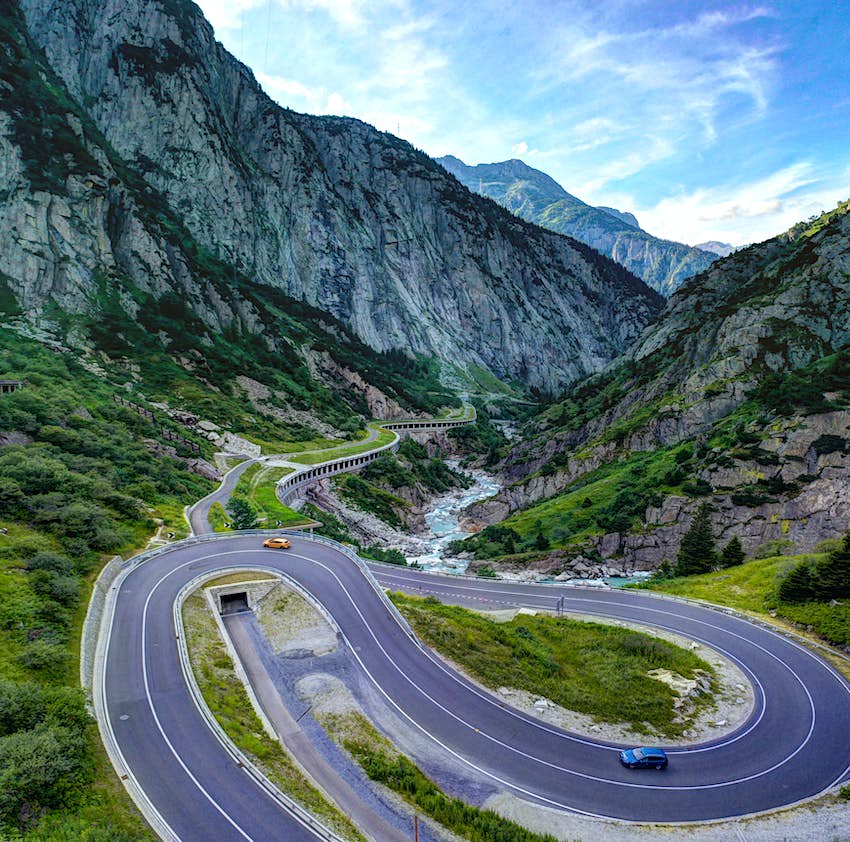 Mountains and valleys seem to ripple into infinity from the 2128m peak of Mt Pilatus, where the restless ghost of Roman prefect Pontius Pilate is said to roam. As the legend goes, his corpse was thrown into a lake at the summit and he has haunted these parts ever since – hence the name. 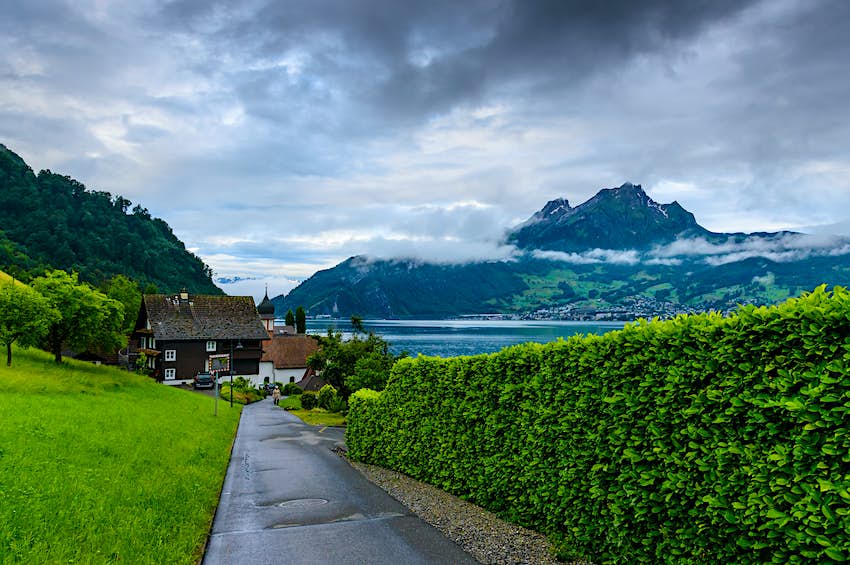 Reached by the world’s steepest cog railway since 1889, with a gradient of 48%, the mountain is an easy and insanely scenic day trip from Lucerne. Getting here would have been more of an effort back in the 19th century when Wagner waxed lyrical about Pilatus’ views and Queen Victoria trotted up here on horseback. But the exhilarating views on the walking trail are little changed: reaching across the lake, deep into the Swiss Alps and as far as Germany’s the Black Forest on clear days.

How to reach Mt Pilatus: From May to October, you can reach Mt Pilatus on a ‘golden round-trip’ day excursion, a combination of boat, cogwheel railway, cable car and bus.

Switzerland heart in every possible sense of the word, Lake Lucerne’s southernmost arm is it’s most ravishing. At times as narrow as a fjord, Lake Uri’s jewel-colored green-blue waters give way to forested cliffs and peaks that rise sheer and rugged. 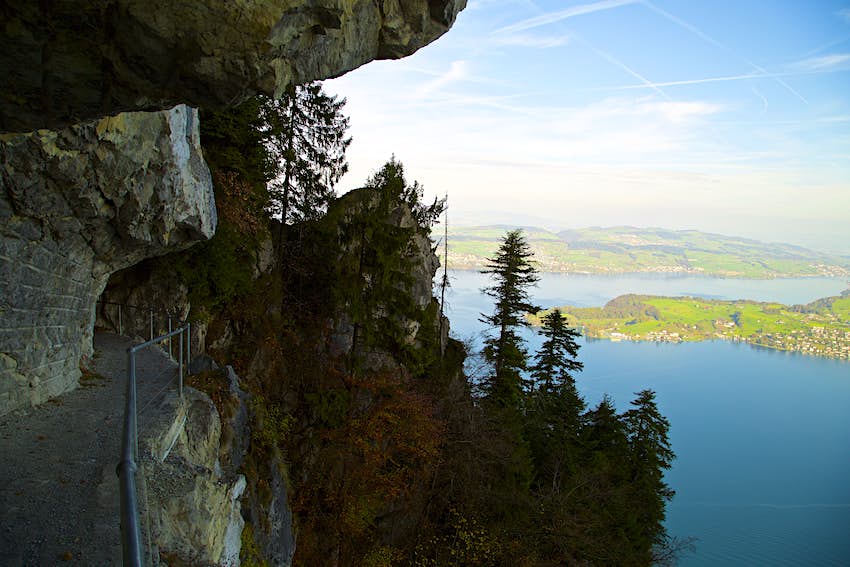 Cruise these waters and you’ll glimpse Rütli Meadow, the hallowed birthplace of the Swiss Confederation as the spot where the Oath of Eternal Allegiance was signed in 1291. Nearby is the Tellskapelle, a little chapel ensconced in woods, where the apple-shooting hero and Swiss rebel William Tell is said to have leaped to safety from the boat of his Hapsburg captor, Gessler.

Myths abound, too, at the Schillerstein, a near 30m-high natural obelisk jutting up above the lake. Its inscription pays homage to Friedrich Schiller, the author of the play William Tell.

How to reach Lake Uri: Boat is the way to go to really see Lake Uri. Take SGV’s regular ferry service from Brunnen to Flüelen. (44 minutes). Trains link Lucerne to Brunnen (46 minutes) and Flüelen (one hour).

Puckering up between lakes Lucerne and Zug, the 1797m peak of Mt Rigi is well known for its blazing sunrises and sunsets. Turner was so smitten with the outlook and the singular quality of the light that in 1842 he painted the mountain in watercolors at three different times of day (Blue Rigi, Dark Rigi and Red Rigi). 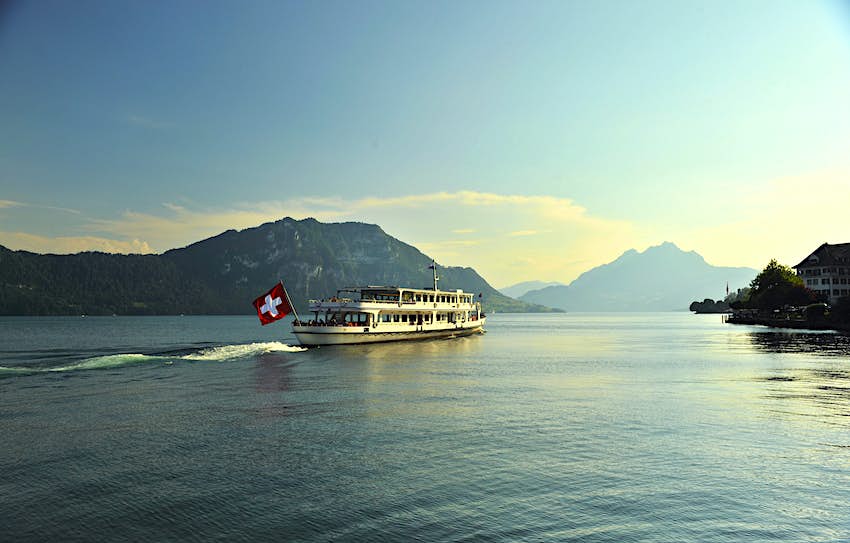 Europe’s oldest mountain railway – celebrating its 150th anniversary in 2021 – hauls you to the summit, where the view is extraordinary, stretching across both lakes to Mt Titlis and the glaciated peaks of the Jungfrau massif. On clear days, you can see 24 of Switzerland’s 26 cantons. There’s terrific high-level hiking up here in summer on 120km of marked trails, as well as low-key skiing, snowshoeing and sledding in winter.

If you’d prefer a swim or massage with a sublime view, head over to the Mario Botta-designed Mineralbad & Spa Rigi Kaltbad.

How to reach Mt Rigi: Frequent trains run to Vitznau (one hour) and Goldau (32 minutes), where you can connect with cogwheel railways to Rigi Kulm (32 minutes and 44 minutes respectively).

As if cupped in celestial hands, Engelberg (literally ‘Angel Mountain’) wings you straight to Alpine heaven with its ragged backdrop of glacier-streaked peaks punching well above the 3000m mark. When the flakes fall in winter, skiers and boarders descend on the resort, eager to make fresh tracks in the off-piste powder. In summer, these mountains offer mile upon joyous mile of high-altitude hikes. 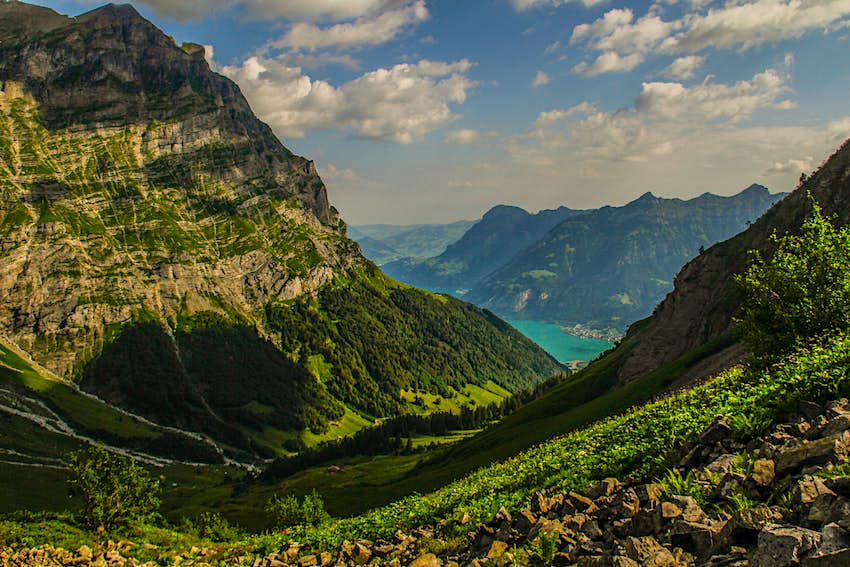 The icing on the cake is 3238m, glacier-topped Mt Titlis, Central Switzerland’s tallest mountain, home to the world’s first revolving cable car, which soars above the deeply crevassed ice. With the Alps as far as the eye can see, views from the top are staggering, especially if you brave the Cliff Walk, Europe’s highest suspension bridge. Get an early start to avoid the glacier is at its busiest.

How to reach Engelberg: Engelberg is a 40-minute drive south of Lucerne via the A2. There are hourly fast trains linking Lucerne to Engelberg (43 minutes).

Cradled in the folds of jagged mountains, where Lake Lucerne narrows as it turns sharply south, Brunnen’s quayside is quite the Alpine dream. Turner was so impressed by the view while sojourning here that he painted The Bay of Uri from Brunnen in 1841. When the föhn wind sweeps down from the peaks, conditions are ideal for sports on and above the water: from sailing to paragliding, windsurfing and kitesurfing. Should you fancy a walk instead, hook onto a section of the 35km, two-day Swiss Path around Lake Uri. 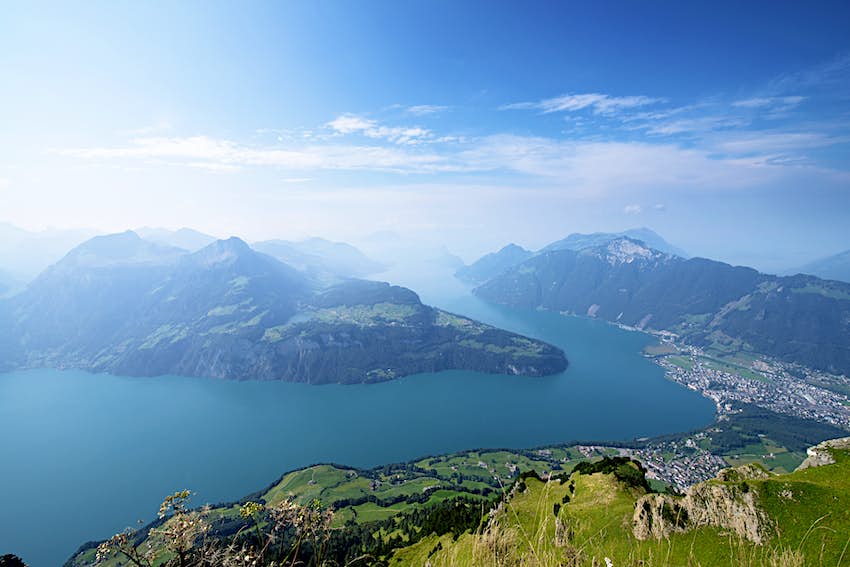 Not only the surrounding peaks offer knife-edge perspectives. Victorinox hails from these parts and the Swiss Knife Valley Museum tells you all about it, with a fascinating romp through the history of knives. The highlight, however, is the chance to build your own Swiss Army Knife (a process of just 15 minutes).

How to reach Brunnen: Brunnen is a 40-minute drive south of Lucerne via the A4, or take one of the regular trains (45 minutes to one hour).

Flinging up to the south of Lucerne, Stanserhorn is one of the easiest and quickest ways to get high above the lake. From the 1898m summit, an intricate tapestry of mountains, lakes, fields and forests unfurls. Getting there is half the fun, involving a quaintly old-fashioned ride in an 1893 funicular to Kälti, where the double-decker Cabrio cable car takes over, swinging up another 1100m in just 6½ minutes. This is the world’s first cable car with a roofless upper deck and it can get mighty breezy up top. 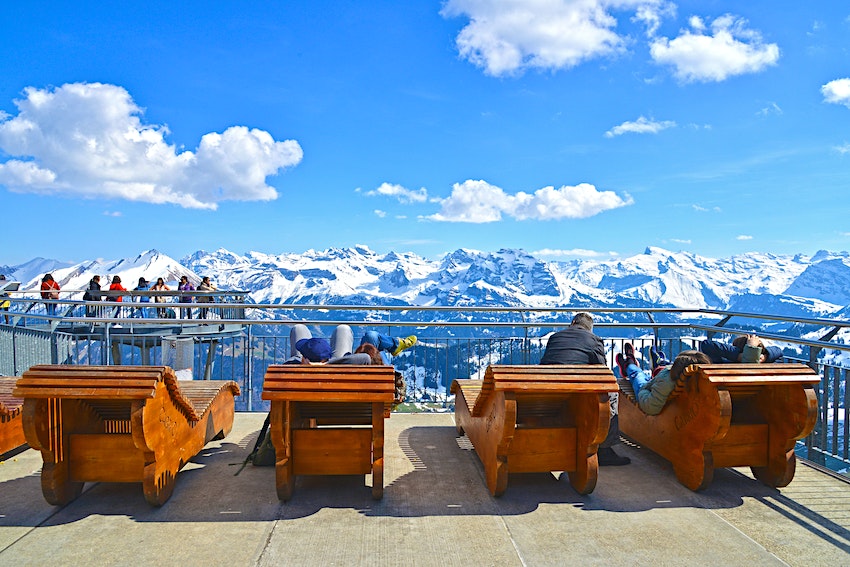 At the summit, there are plenty of big-view hiking trails and hang-gliding and paragliding when conditions allow. The ‘Stanserhorn Rangers’ give the inside scoop on everything from wildflowers to where to spot eagles and marmots.

How to reach Stanserhorn: Stanserhorn is a 25-minute drive south of Lucerne via the A2. Frequent trains make the same journey in 13 minutes. From here, a funicular rises to the summit from mid-April to early November.

Tucked away in the eastern corner of Switzerland’s Bernese Oberland region, Meiringen has a phenomenally beautiful backyard, with hiking and cycling trails leading to wild valleys, waterfalls and high-Alpine moors. 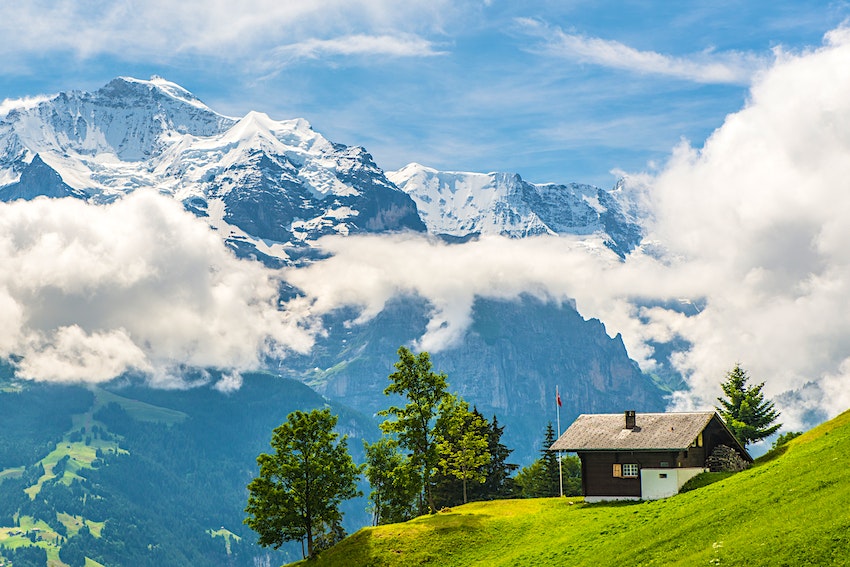 Get an early train for time to see both of its big-hitting natural wonders. First up is the 250m-high Reichenbach Falls, which plummets over sheer, wooded cliff faces with a deafening roar. You can see how author Arthur Conan Doyle thought it the perfect backdrop for a dramatic finale: in The Final Problem, he pushed both Sherlock Holmes and Dr. Moriarty over the precipice here.

The Aare Gorge is just as riveting, with tunnels and galleries wending past milky-blue torrents and limestone overhangs.

Stay for more than a day to delve deeper into the Hasli Valley – to see the Triftbrücke, Europe’s highest (100m) and longest (170m) suspension bridge, dangling precariously over the Trift Glacier, for instance, or the waterfall-laced glacier gorge of Rosenlaui.

How to reach Meiringen: Meiringen is a 50-minute drive south of Lucerne via the A8. There are hourly trains to Meiringen (1 hour 10 minutes).

When Lucerne is rammed on summer weekends, Einsiedeln, hidden away at the end of a valley and framed by gentle wooded hills, makes a peaceful day trip. Pilgrims come from afar to this small town, which is Switzerland’s answer to Lourdes. According to legend, the Bishop of Constance tried to consecrate the original monastery in AD 964 but was interrupted by a heavenly voice, declaring: ‘Desist. God himself has consecrated this building.’ 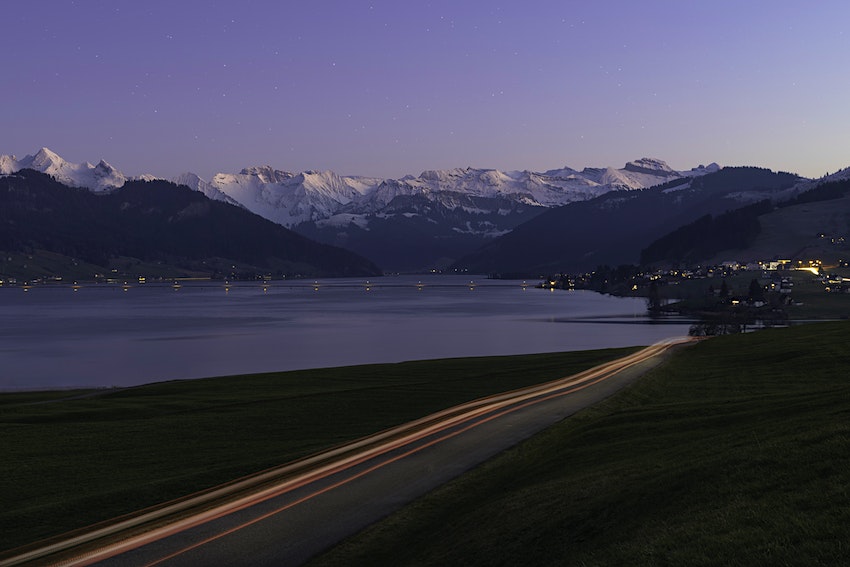 Whether or not you believe in miracles, the 18th-century Klosterkirche abbey church is magnificent, with its opulent frenzy of frescoes, stucco, marble, and gold swirls. Pilgrims pray before the tiny statue of the Black Madonna. For a view over the abbey to the hills beyond, trudge up to the Statue of St Benedikt.

How to reach Einsiedeln: Einsiedeln is an hour’s drive east of Lucerne via the A14. There are twice hourly trains (1¼ hours).

The 5 Best Day Hikes in the Swiss Alps

A guide to the top 10 Swiss foods