This is the hilarious moment a baby elephant slipped around in a mud pool after attempting to charge at a passing warthog.

The footage, filmed by Ewan Wilson at the Addo Elephant Park in the Eastern Cape, South Africa, captured the playful calf as he splashed around in the pool with his family.

The youngster then spotted the passing warthog, who was scurrying across the edge of the pool. 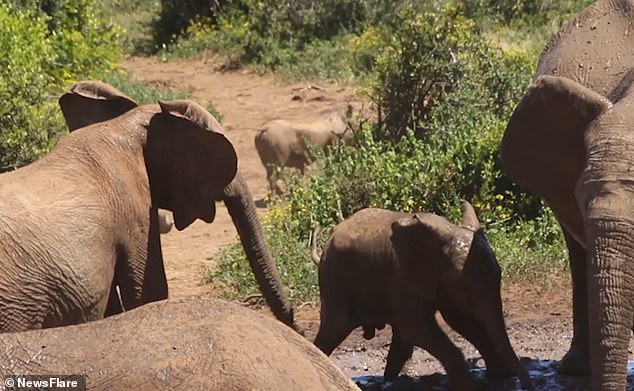 The footage, filmed by Ewan Wilson at the Addo Elephant Park in the Eastern Cape, South Africa, captures the playful calf as he splashes around in a mud pool

In a brave move, the calf then decided to charge at the warthog, bracing its feet on the wet mud as the critter stopped ahead of it.

The tiny critter backed behind a larger elephant for a few seconds before leaping forward – and clumsily slipping on the ground beneath it.

A man, who spoke from behind the camera, said: ‘That’s very brave. He tried to charge then slipped in the mud.’

The warthog ran as it saw the elephant approach, but the calf quickly recovered from the near-fall and charged again. 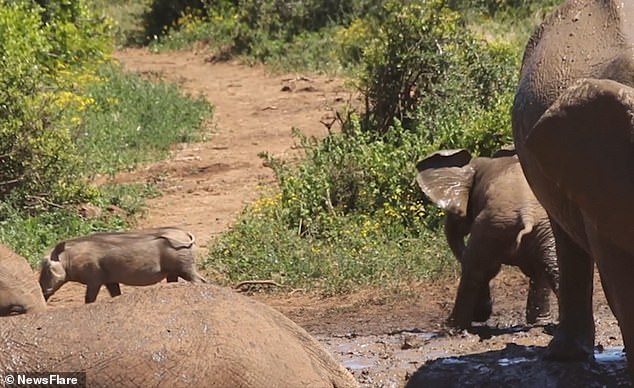 The youngster then spots a passing warthog, who is scurrying across the edge of the pool 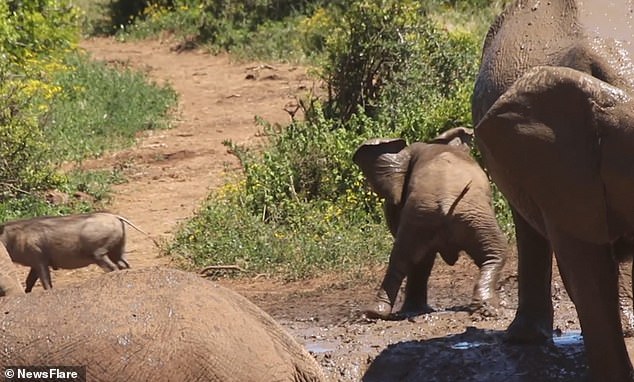 But when the calf tries to charge at the interloping beast, it slips dramatically on the muddy floor

After slipping for the second time, the little elephant gave up on its endeavor, instead of running back up the muddy path to its family.

A woman said: ‘Run back to mum, quickly!’

A larger elephant then stepped between the youngster and space where the warthog had been as the video ended.

By: FAITH RIDLER FOR MAILONLINE